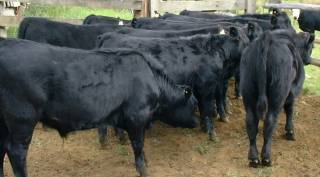 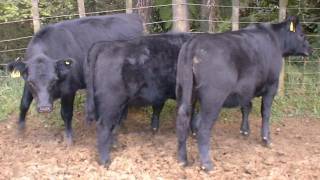 The big local Weaner Calf Fair happens at the end of the second week in March every year, at the Peria Saleyards.  We decided this year to sell all of the steer calves and the bottom three heifers (based on their growth rates to date).  We had put ear-tags in them all much earlier in their lives, with their individual numbers on them, but to comply with Animal Health Board regulations (in their fight to control the spread of, and eventually eradicate, TB) we had to put a "secondary" tag in the other ear of each animal going to the sale.  So we brought them into the yards on their way from one paddock to another and did that.
One or two of these look a bit peeved... the steers at the top and the heifers below. 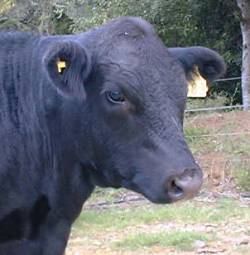 Here, modelled by star-of-the-year steer #383, the eartags as specified.  We have some choice in the appearance of the tags, i.e. the front "primary" tag must show an individual animal number, but can be various sizes and can be yellow, yellow or .... yellow.  Many farmers opt for the minimum size (and cost), but I like to be able to see who's who, from as far away as possible, without hanging something the size of a road-sign in the ear of the animal.  These ones seem a reasonable compromise for our system.  The "secondary" tag can be any size, but the minimum is the "button" tag, which we only put in if we know we're going to sell the animals.

We wean our calves by putting them on the truck and sending them to the sale.  (Those who stay here get separated by a sturdy fence and just get used to the idea over a few days.)  Thursday morning just before sun-up, we were out in the yards, separating the steer calves from their mothers and waiting for the truck to take them away.  I prefer this sort of "sending away" to the other, which is what I have to do with the older cows and anything going to be prime beef, which ends at the works, rather than on another farm somewhere.

It would be easier on the buyers of our calves if we weaned them before they went to the sale, since small "lost" animals will go an awfully long way looking for their mums.  But since we calve later than most people, by the time the sale occurs our calves are only just six months old (some are only just over five months old) and I don't want to wean them any earlier than that.

I've been giving a lot of thought to our timing and the necessity of getting calves to this particular sale.  Buyers tend to come from all sorts of places, near and far, to the Weaner Fairs, so prices are likely to be better at that sale, than if we waited for another month or two.  Most people, since they calve in July/August, compared with our September/October timing, have much bigger calves than we do, by the time of the sale, so we don't get as good prices as some of them do for those larger animals.  But with the rainfall here and the timing of grass growth, it's never worked well for us to calve any earlier.   We might try to edge our timing forward again as we sort out more of the fencing and are able to control the pasture better than we can now. 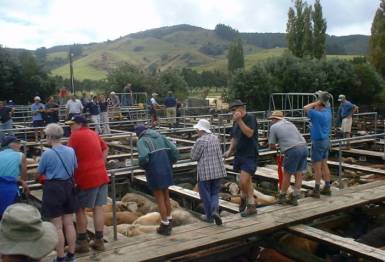 This is the Saleyard at Peria, inland from Taipa.  It's a great gathering place for catching up with people.
The cattle are penned in their "lots" ready for the auction to begin.  The Weaner Fair is an incredibly noisy event, with around 2000 hungry, confused, often very hot, calves yelling their heads off!  Just after this photo was taken, the sale began and then so did the rain.  Rain on such a day must be much easier on the animals than scorching sun, but it tends to send some of the potential buyers off to the tea-room for more breaks than they might otherwise take, so they're not there bidding (or so we suppose - sounds a bit wimpy for such a "tough bloke" sort of community!).

Thursday was the sale of the Steers and Friday, the Heifers.  We sold 13 steers for a reasonable sum and the three heifers more cheaply than I would have preferred, but I didn't want to bring them home again, so had decided to take whatever I got.
The sales are always really interesting in terms of the price one gets for animals about which one knows the details and the price one sees other animals sell for, which appear, in some cases, far inferior to one's own.  In my opinion, there is simply not enough information allowed to be provided on the animals one is selling.  Time and labour constraints are a large part of the problem, it being a huge event to organise, with three or four stock firms involved and so many vendors, animals and buyers.  I look forward to the time when that can change and we can provide and have available, information on age, breeding and weight (as a bare minimum), on the animals we're selling. 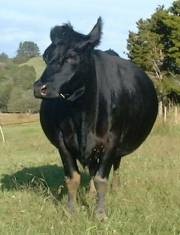 I'm a bit suspicious of this heifer, Virago Iona 04.  We got her and Quean 03 in-calf last winter to calve this autumn.  With still four or so weeks to go until she's due to calve, Iona is looking incredibly round.  I'm starting to wonder if there is more than one calf inside that huge belly.  She wasn't a particularly round heifer when not pregnant, so I doubt it's all gut and gas!