The official beginning of Autumn, 1st March and off we go again.... 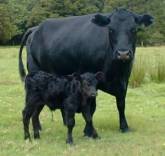 Here's the first of the Autumn calves.  She's a tiny wee thing.  I shouldn't imagine she weighed more than about 25kg when she was born.  However, on her older sister's form, she'll grow up pretty quickly.  Bertrand's calves are quite small when born, but their growth-rates are excellent.

Today (2 March) it rained, so there were three of these "hen tents" out on the grass, with multiple chicks sheltering inside them.  All of the chicks were born during the last couple of days.

I took some photos of a couple of the pheasantams, for a bit of an update, which you can see via this link: Pheasantams.  We forget how different they are from everything else, until we have visitors who wonder what on earth they're seeing! 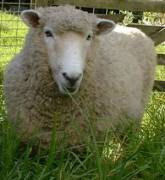 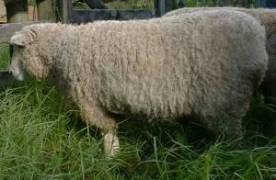 Damian lined up for a "haircut" on Monday 4th of March, along with the big old ram (who isn't pictured).  Damian had been flicking his tail around and looking irritated, for a couple of days, so we suspected some fly-strike.  He had a few maggots chewing away at his belly, so we were glad to have done him before they did any real damage. 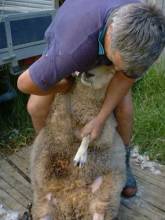 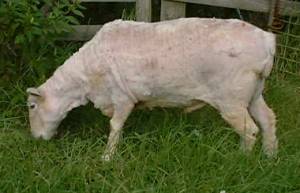 He never seems that keen, really.
Frankly, I wonder if we should just let him keep his clothes on... he's awfully fat and lumpy under all that wool. 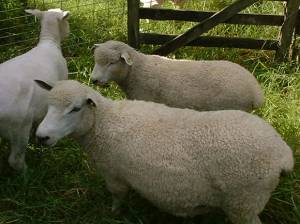 The "Inverse Face Lift" lamb, Yvette's first child, pictured here at the back, is no more.  We decided it was time to put some meat in the freezer and the big white newly shorn hogget and the biggest lamb, were the two chosen on the day.  Yvette's lamb would normally have waited a bit longer, but since he had grown so well, and since his eyes have never come right, and as the freezer was his ultimate destination, it seemed like a good idea to do that now rather than for him to wait any longer.
On close examination, I discovered that his eyes had not sustained as much damage as I originally expected.  Both cornea were quite scarred, but no longer ulcerated, so were possibly not as painful as they looked earlier.  His eyes had continued to weep constantly though, because of the irritation by the eyelid hair. 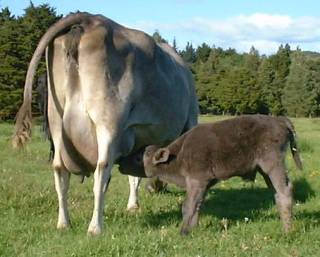 Cow #16 with this year's calf, born early Monday morning, and exactly the same colour as last year's one.  This time a bull baby.

The tractor has gone to the tractor fixing people, the PTO (power take-off) having failed again.  The PTO drives things like the slasher and the fence post thumper, slashing and fencing both being tasks which Stephan ought to be engaged in during his upcoming "break" from "work".  (I trust by now that those terms being highlighted in such a way really needs no explanation, but just in case: our jobs off the farm are often less strenuous than what we do at home, and a break is not something we get the chance to take very often and "breaks" from "work" usually just mean a chance to catch up around the farm).
The tractor isn't just having a toilet break before going on the truck.  Tractor tyres are partly filled with water, to keep the center of gravity of the machine as low as possible, because tractors are often operated on strange angles on hillsides and the like.  But to go onto the truck for the trip, the tractor needed to be made lighter, so, out came the water and the tyres were refilled with just air.

The third of the Autumn calves was born on Thursday evening.  The whole thing was caught on camera.  See it here.