Due to the incompetence of Babette as a new mother (partly excusable since she had mastitis and was probably quite uncomfortable) we've been so busy helping her lambs to feed, that the updating of this page took a place further down the list of things-to-do.
The first ewe and lamb, as pictured last week, have formed a tight bond and lamb is getting quite solid and plump.  Babette's two boys remained skinny little bone-bags for several days, surviving only with some supplementary feeding while we helped Babette to regain her health.

Two days after those first three were born, the next three made their entrances, with yet more problems.  Matilda had a dead boy, which I promptly skinned and used his skin to recoat one of Babette's boys.  Putting the skin of the dead lamb on another, allowed Matilda to accept the other lamb as her own, with a little patience and enforced proximity, which immediately halved one of our problems, in that Babette now only had to feed one lamb.

During that same day, another of the first-timers was apparently having problems; promptly solved when we caught her, tripped her up and assisted the birth of two mighty-sized boys who were rather stuck.  I think their heads were just a bit too big and certainly they took some struggling by both the ewe and me to get them safely out.

Thankfully, since all of those problematic births, the latest two ewes have managed quite nicely on their own, producing three ewes between them.

We'll get some pictures on here shortly.
Tuesday, 7.50pm (ish) 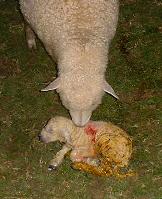 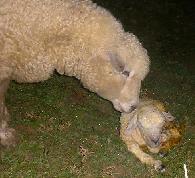 Yvette and one boy (so far).  Shortly I'll go and check if there's another.

There wasn't.  Another one I mean.  And just to make sure we didn't relax, this one has his own problems: folding eyelids.  I've flipped them out and they just roll back inwards again.  So, here's the first attempt at a solution... 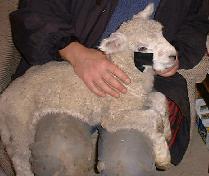 ... a bit of tape on each side and a chin strap to pull the whole lot downwards.  The eyedea (whoops, actually wrote that!) being to pull the lower lids down so they stop curling into the eye.  At least the cornea of his eyes will have a chance to recover (they've already become ulcerated) and hopefully the lids themselves will 'learn'a new way to behave.  I'll try superglue and string next, if this doesn't work.  If we don't do anything, he'll live in pain and presumably go blind quite quickly.

Stephan's finished scrub-cutting in the Pines paddock!!!  Yay!  Here's the before photo, we'll try and get the now/after one tomorrow... 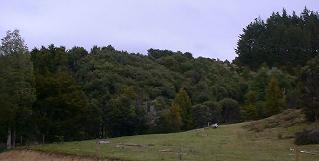