I don't know enough about these birds (Paradise Ducks) to interpret the meaning of this pair spending half of Saturday out standing in the field.  I thought she (white head) was sitting on eggs.

This guy is a real worry.  This is mid-attack on Stephan (holding the other end of the stick).  He appears to use a fast wing-flap in his attack and it's quite a knock! 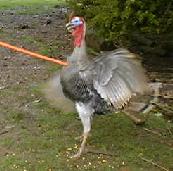 Carrying a stick when visiting this area has become necessary for survival.  Whether Turkey will live long enough to make babies with the hen-turkey is debatable.

What a day!  Tuesday started for me at 5am on hearing the plaintive cry of a lamb.  Upon checking, I found the lamb was up and moving and so was whichever ewe was its mother, not that her identity was terribly clear in the dark and because she did not seem to be very close to her baby.  After breakfast we caught her and her baby (who by that stage had tried to access every udder in the paddock) and penned them together.  The first colostrum filled milk has to be taken within about 12 hours, so this is how we cope with ewe-lamb rejections...

We force them together!

Babies are much happier after a good feed, even if the milk-baa is upside-down.

Babette at 5am was making motherly noises as well.  So, in the name of photography and hoping to diary the birth of a lamb or two, I patiently waited in the cold dark for a very long time; my past experience told me that Babette would not be long in production.  However, that was not to be.  Morning light arrived and hours later, around 11am I saw this ...

... the back end of Babette sheep.  I can see now in the calm light of my living room, that there is only one foot there.  You can also see the nose and mouth resting on the emerging foot.  Babette gave up after I took this photo and just stood around looking uncomfortable.  I went away, hoping she'd get on with it again.  I also sought a veterinary opinion at this stage, just in case, (our vets are just the best!) and was urged to go out and do some 'hands-in'checking to find out what was happening.  Thus with a bottle of lube in hand, I approached the unwilling ewe, tripped her up so she lay down for me and dove on in.  Inside I could feel a leg and the head, so, pushing the lamb back in a bit, I managed to grab hold of the other leg and gently work the bent-over foot out straight.  I was half expecting to pull out a dead lamb, but a nose wriggle assured me things were still well.  A second womb-mate came soon afterwards with as much help as the first.  However, Babette, having spent so long trying to birth them, was no longer interested.  She has (later) now recognised them as her sons and is doing a lot of licking but as yet no feeding.  Hopefully she'll do that before the end of the day, or we'll have to intervene there too. 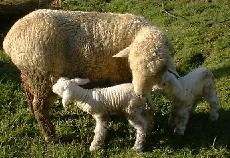