In the mean time, just really ordinary stuff.  While many of you were sitting around having a relaxing Saturday afternoon, or going to the beach, or if you're in the other hemisphere, just sleeping, we went out and moved the cows.... from one grassless paddock to another with just a smidgen more.  This measurement is relative of course.  Our animals are in peak condition and we have much grass compared with many in other parts of the country where there really isn't any green.

These are the pregnant cows and heifers and we were trying to move them through this tasty area to go and live on the hill over the road for as long as the grass there will last. 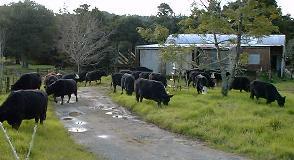 Some of them are overly fat and we'd like them to thin down a little before calving in around six weeks time.  If the heifers are too fat, they might have some difficulty during birth.

We found out how to take photographs through binoculars - the telescopic lens for the poor farmer!  It may have helped to have cleaned all the lenses, but here is the point of it all...

A pair of pair of Paradise ducks has been routinely hanging around at the bottom of the paddock across from our house.  We're pretty sure the female has a nest in the trees by the river (saw her fly up into the trees one afternoon).  The male, here pictured,

has moved off further up the farm, presumably so as not to draw attention to his partner's whereabouts.  We don't know much about the habits of these ducks, other than that knowledge gained by observation.  If you do, feel free to let us know. 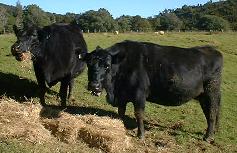 The two old girls having their daily supplemental feed... something they can get their tongues around, since gaps in the teeth make it hard to eat very short grass.  They are Ivy 556 and Lindertis 572 of Maunu (registered stud names). 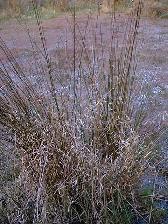 The pukeko are nesting, evidenced by this find, in a swamp where a pair of birds nest each year.  No eggs yet, but no doubt there will be soon. 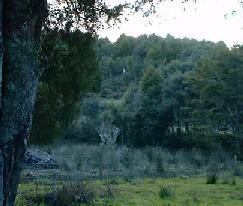 The white "dot" in the upper-middle of the picture is Stephan, with scrub-cutter machine in hand, laying waste to numbers of manuka trees, which have staged a take-over in this paddock.

Afternoon walks at the moment are generally muddy, wet, dim and none of the cattle for which I'm looking, in sight, checking that none of them have come to any unfortunate pass... 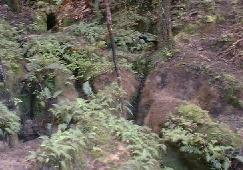 Is this a beautiful wee gully or something more sinister? 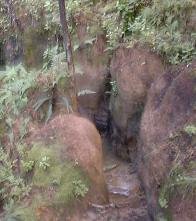 This, from further to the right of the previous picture, was nearly the grave of one unfortunate steer earlier this year, who became wedged in this narrowness and remained stuck, until he was thin enough to wriggle out.  Hence regular checks on this paddock when the cattle are in residence.