In this space were to have been some amusing photos of a small, slightly startled chicken, being surprised in the middle of laying her second egg in the bottom of the wardrobe on Sunday afternoon. (Not her second egg on the same day, you understand, but the second laid on that particular shirt, the first having been laid two days previously and the chicken on that occasion being caught in the room by the sudden closing of the outside door.  However, since her egg-laying presence was not detected until she squawked her "I've done it" call, we did not know where she had "done it" and had to allow her back again in order to discover the location of her "nest".  Had we not, you may imagine the possible consequences.)  There were also some rather beautiful skyline pictures across the bush from Sunday evening. However, due to the ineptness of the author on this occasion, none of the views are now available.

Help, help, we couldn't get out!  There was a flood!  It was ok though, really; it was, after all, the middle of Sunday night.  It wasn't exactly like this, because actually it was dark, but this is the general idea: 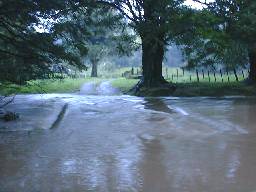 This view looks back toward the view shown of our entrance.  This is the only way out.  The river floods to this level and higher several times each year, but usually only for a few hours.  The longest lasting flood, recently, was around sixteen hours last year.

The behaviour of the rivers in flood can differ markedly depending on which lot of hills gets the rain and when.  Just downstream from the point shown is the intersection of the Waikawa River, which flows down through Diggers Valley, and the smaller stream which comes through the farm.