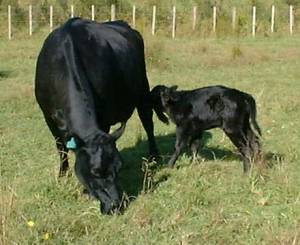 After the disappointment of yesterday's dead calf, the first thing I saw in the paddock this morning was a heifer calf from an old cow who has only produced bulls for the past three years.

A heifer this year is really nice, since this will be her last calf and we have one very good daughter of this cow already.  Actually this is the same cow who's birth process I photographed at this time last year.

However, that calf was to be only the first of three born today!  I moved Onix and #90 to the paddock near our house, because #90 looked like she was quite close to having her calf and I had previously predicted that today would be Onix's day, so I wanted to keep a close eye on them.  Onix looked a bit uncomfortable, but not really much closer to calving than she had the previous day, but soon after I'd moved them, she started labour!

During the afternoon, Onix had her calf!  Since Issa couldn't be here, the school holidays having not yet begun, I had to be his eyes.  I sat in the paddock with Onix for the entire process, on my fold-up chair, with my little computer at the ready to unload the camera memory card as I filled it up with the 70+ photos I took during the three hour process.  The situation was a bit worrying at times, since for a long long while, nothing appeared to be happening and then there were feet and another very long while before anything else appeared.  In the end, though, all was well.  The calf is the liveliest I've seen and an incessant feeder, which either means she's mad keen, or there might be a bit of a problem with Onix's milk supply... we will watch closely during these first few days.  For some of the birth sequence (not all of the pictures taken!) click here.

Here she is on Sunday... 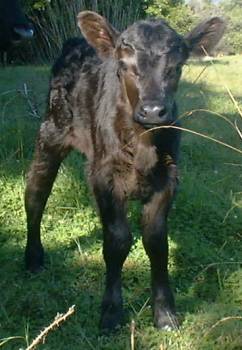 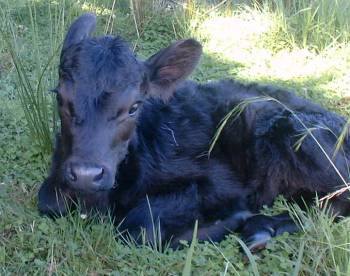