The insemination mob has been gathered together for a week now, and at last one of them has come on heat and is ready for insemination!  114 calved on 5 October last year.  In the previous three years, when she was run with a bull during mating, her heat indicators haven't operated properly; this year, amongst the cows, the indicator has been much more reliable.
I drafted 114's calf and 92 out of the mob out on the farm, to walk with her in to the yards. 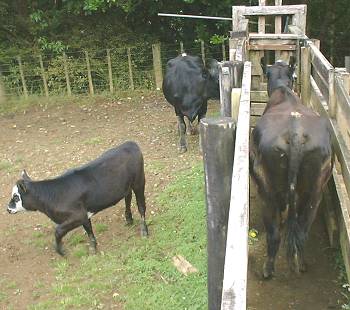 You may recall the near-death experience of this calf, during which he suffered an injury to his leg. 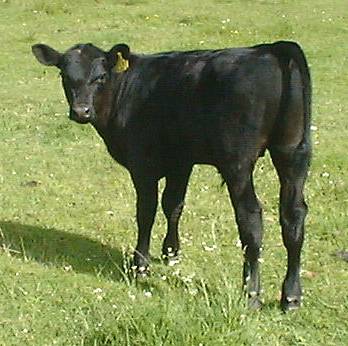 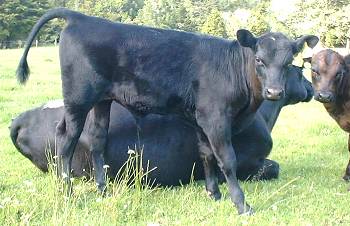 He limped around for about six weeks, but now walks almost completely normally.  If one looks very closely, the left leg joint can be seen to be a bit different from that of the right.  If he were to live a long time, he might well develop arthritis in the strained joint, but as a steer, he's unlikely to be around for that long. 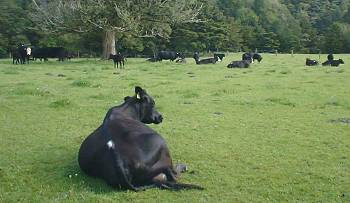 All's quiet again in the insemination mob this morning.  I guess that one day I'll suddenly have to do multiple inseminations!
The weather is simply beautiful! 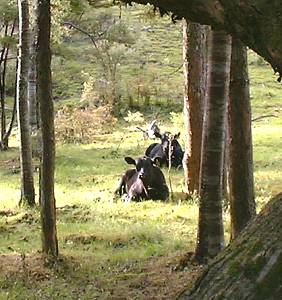 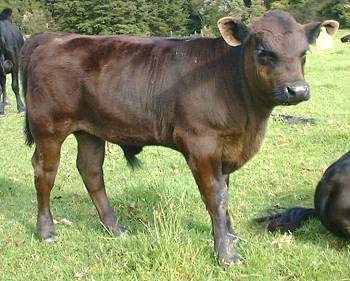 Here's Virago 27, as yet un-named (*note to self: must get around to registering the births of these calves!): Isla's calf.  It seems that Angus Black can be a number of different colours!  The colour differences make telling the calves apart quite easy when they're little, since they range from jet-black to an even lighter brown than this.  The calves will darken as they grow up.
He's the nephew of his elder half-brother, his sire being the son of the sire of Isla's calf last year.  Confused? 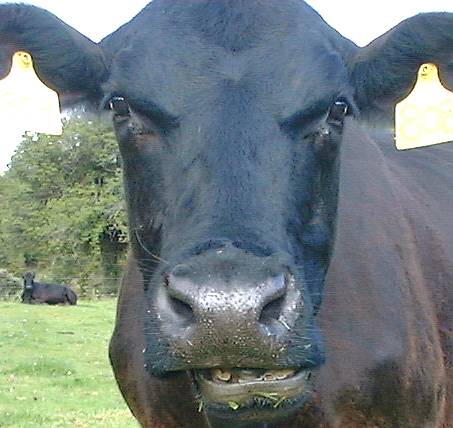 This is Maunu Sybil 808 AB who is now 9½ years old and was looking a bit thin as she neared the end of her pregnancy this season.  At that time, I was able to see that she had a full set of teeth, but now it is obvious that she does not!  I only looked at the teeth in the same way on the previous occasion, and I suppose it is possible that the one which has now fallen out, had been causing her some discomfort when eating at that time.
In the picture she is quietly chewing her cud (which they don't do politely keeping their mouths shut) and you will see the tip of her tongue just back in from the two centre teeth.  There should be eight incisors in a row and Sybil has all four left ones, but a gap at number two on her right side.
In a large herd such infirmity would lead to her being culled from the herd, but in this case I shall just look after her a little better through the next winter, to ensure she, like Ivy, has access to enough feed to maintain good condition.

The Tsunami disaster in Asia continues to fill our thoughts as we begin this year.  Neither of us was even aware of the event for a couple of days, cocooned as we were in our own illness.  We are, like most people we talk to, stunned by the magnitude of the disaster.  Stephan talks of a desire to go with his ability to make anything from nothing, to help do just that.  Whether such willingness is useful will require investigation. 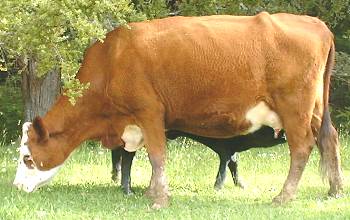 This is #79 who is one of the first daughters of our first Angus bull and a cow we called Dinner.  Dinner never was so (at least not here), but we thought she was going to be made into beef for Stephan's sister when she was left on the farm and Elizabeth and her family moved away from next door.  In the end we just put Dinner out with the bull with the other cows and she had some calves and this is a heifer we kept.  Dinner had horns, but because Angus cattle are naturally polled and that gene is dominant to the horned one, 79 is also polled.

This year 79 is in the "cull mob", the members of which will not be retained on the farm.  Deciding who goes into this group this year has taken a great deal of thought.  I needed to make room for the young heifers to join the breeding herd and so the cull mob is somewhat bigger than it has been in other years.  A few of the cows are, like 79, of that first crop of Albert's daughters and being cross-bred from dairy and dairy-cross mothers, I've wanted to replace them with the better-bred, younger heifers.  Others are in the mob for health and management reasons: 94 and 117 have poor feet which are causing or will likely soon cause problems; Queenly has arthritis in a leg joint and is looking more and more uncomfortable during each winter; 16's udder size has become an issue, evidenced by the problems she had earlier in the season; 344 and 352 are two of the really big-boned daughters of Bertrand, who simply can't handle the winter conditions here.  They've both produced two calves, unfortunately in opposite sexes to that I would have liked: 344 has had two quite decent bull calves and 352 has had two really poor heifers.  I'd have liked to keep a heifer from 344 and Quadrille, for I'm sure his input would have moderated the extremes of size in her.

Crispin was rounding up his three heifers again last evening, so when I went out to check the cows this morning, I was surprised to see the on-heat heifer, #430, sitting under a tree.  She didn't look quite right and was still sitting down when I returned: I would have expected her to still be dancing around the paddock with Crispin, but he was quietly grazing a little way off.  Where she was sitting there was a small pool of very bright, congealed blood!  I prompted her to stand up, so I could make sure she was able to do so, and she seemed alright, although obviously uncomfortable.  I rang the vet as soon as the clinic opened and was advised to get her in and do a careful internal examination to see what had happened.

We waited for some very heavy rain to subside and then took her to the yards.  Internally things didn't feel too good: there was an enormous blood clot in her vagina which I thought must indicate rather more than a small tear or graze.  The heifer was also in a lot of pain and I didn't want to prolong the extra discomfort of my inexpert investigations, so range the vet's and arranged for a visit.  Liz arrived within the next hour or so and gave 430 an epidural injection to cut out the pain while she checked what might be wrong.  Her assessment was that the cervix was in pieces and that the top of the vagina was probably pretty well demolished.  She didn't want to dislodge the blood-clot, since that might have led to further blood-loss, although we couldn't know whether or not there was internal bleeding which might still lead to 430's death.

Liz inserted an antibiotic pessary as well as injecting the heifer with penicillin and an anti-inflammatory drug and went off on her way.  The heifer looked a great deal more comfortable than she had earlier, when she was stretched out on the ground, looking like death was imminent!  We put the three heifers in the paddock beside the yards so I could keep an eye on 430 and easily get her back to the race for further treatment.  She would need another three days' penicillin injections and I intended giving her arnica as well.

She was still alive in the evening and looking quite bright and normal.

Later on in the evening I brought a couple of cows in for insemination and to have lost heat-indicators replaced, and while I was getting the gear ready in the little shed, discovered that the rather loud chirruping of some baby sparrows wasn't coming from up near the roof where their nest was, but rather from a box on a shelf beside me, into which most of the nest had fallen.  There were three of them, scurrying about like mice every time I looked at them.  I pondered leaving them there for their parents to take care of - or not - but in the end relented and took them home with me to make sure they were warm enough overnight. 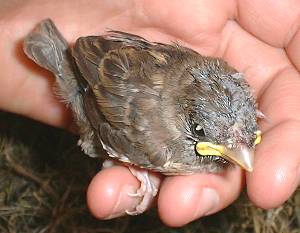 430 survived the night and if I hadn't known she was mincemeat inside, I'd not have been able to tell from her outward appearance.

There are heavy rain warnings out for today, and it's raining constantly this morning.

Jill and Bruce came to visit and decided that they'd like to leave their car on the other side of the river so that if they wanted to, they could leave when the water was still a little higher than the car could probably tolerate.  We all waded back and forth over the bridge in the rain as the river level rose.  Stephan fortunately arrived home just before it became impassable.

Because of the constant rain (and then the flooding over the bridge) I didn't give 430 the initial Arnica treatment until later on in the afternoon, during an hour or so when the rain actually stopped and the river had dropped again.

Where was the camera in all of this?  Hanging on the back of my chair in the house, of course.