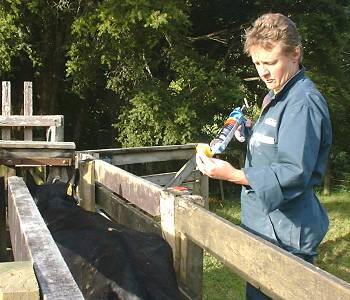 After getting up fairly early to check on the heifers in the insemination mob, I realised I was feeling far too ill to remain vertical, so went back to bed.  We consoled ourselves with the fact that although we were feeling absolutely awful, at least we were not mourning the death of someone close, had had no major disaster to deal with, and would, presumably at some time in the next few days, begin to feel well again.

I got out again at around 2pm and brought the ten animals who now make up the "young mob" back in to put the drench on those I'd not done the other day.

Then I brought the 29 cows and calves in to the yards and weighed all the calves and stuck indicators onto the backs of the cows to be mated.  I dragged Stephan out of bed to help me draft the cows and calves into the four mobs as required.  Drafting adults on my own isn't too difficult, but trying to sort calves as well can get a bit too tricky and frustrating.  Calves don't move as well as older cattle, although I was pleasantly surprised by the behaviour of this lot as I weighed them.  For most of them, this is their third trip over the scales and almost all of them walked onto the platform and stood still for the required time.  Raising quiet cattle is one of my aims and this year I seem to be doing particularly well on that front, working on my own with them in the yards, and getting them used to my quiet proximity.

Some years Boxing Day gets me.  I think how awful it must have been to be awoken by the Police knocking on the door to tell my parents that my brother Bruce had been killed by a drunk on the road, on his way home from our family Christmas.  Sometimes it makes me sad, sometimes angry, that there's a hole in my family where Bruce should have been.  I wonder if that particular drunk is still living in Hikurangi.  I wonder if he still drinks and drives with complete disregard for the safety and lives of others.  I wonder how anybody can do that at all? 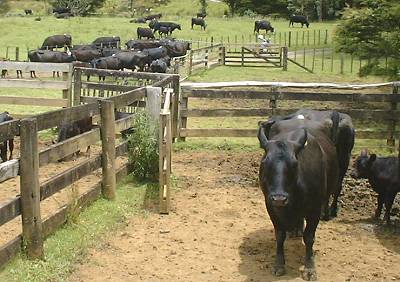 I started early this morning, bringing the last four cows to calve into the yards, weighing the calves and painting them with interesting marks, applying heat detectors to the two cows to be bred again this season, then going back out to get the last thirteen cows and calves and repeating the process.

Then Stephan came over to help me do the castration, vaccinating and tagging.  I figure that if he does the painful things to them, they may continue to believe that I'm the bringer of all things good.

This morning, just before I moved the insemination mob, I pulled out three of the yearling heifers and put them in with Crispin and 356.  I haven't quite made up my mind about the quality of Crispin's calves, but I'm giving him the benefit of the doubt while he's just hanging around doing nothing but getting fatter and waiting for a possible call to duty elsewhere.

Young Arran 20, Isla's calf from last year, hasn't quite worked out how best to court his heifers!  I watched him today as he was obviously keeping an eye on two in particular, and if one of them got too far away, he went out and rounded her up again.  Later in the day he seemed to have settled down a bit to quietly standing and grazing with #410 in particular.

Throughout this afternoon, Crispin has been harassing his small herd of heifers.  He's keeping them at the opposite end of the paddock from the boundary with the paddock in which Quadrille has his cows.  One of these three must be coming on heat, I think, and Crispin is determined to keep her to himself. 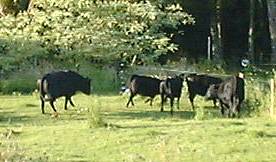 After the heifer on heat had been served, they dispersed for a while, but then it was all on again by Wednesday afternoon.  By then it was raining pretty hard and they looked really miserable when they weren't even allowed to go and find shelter anywhere.  He finally let them go at around noon on Thursday, after the second heifer had cooled off again.  The corner of the paddock is now a muddy mess! 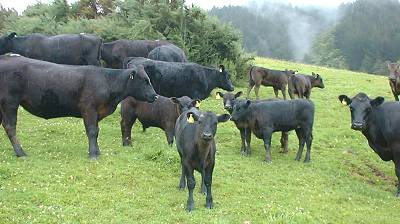 I've sent Arran and his mob of fifteen adult female cattle out to the back of the farm, where the only neighbours are trees.  They all have heat indicators on, so I have to go out to check them all every day, to record who has been served by the bull on which day.  While it continues to rain, that's not the most pleasant pastime, but at least it's now warm.