We have, possibly quite rashly, agreed to go and join my sisters and mother for a family Christmas in a little place called Mokau, on the east coast, a little south of Kororareka (Russell).  I am by this time in the year, usually in the middle of mating for the cattle, but this year have delayed the start of that process by a couple of weeks longer than last year's late start, partly because of my concerns about the change in spring patterns and partly because that will allow us to go away for a couple of days for social purposes.

I brought the young cattle in and weighed them all, drafting out the heifers which I might add to the breeding herd and sending them off to join the largest mob of cows and calves, to enable some social interaction before the start of mating, when they'll be mixed/split into three mobs.

Then I went out to a Summer Solstice party with some friends up the valley and had a lovely time. 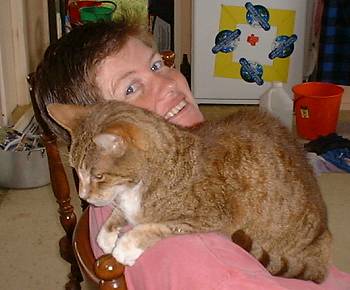 Erika came round in the morning and set up the computer she'd bought for the children for Christmas and beyond.  We decided it would be a good idea to do all the registration and set-up beforehand, since such things can take ages to do, particularly with slow internet connections, such as we experience here.

Things always get interestingly busy at this time of the year, with visits from people we don't ordinarily see very often.  There's something very cheering about having such a holiday season at the beginning of summer, when sitting around on warm evenings with whatever cold beverage takes one's fancy, is so pleasant. 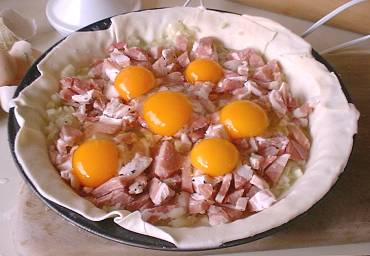 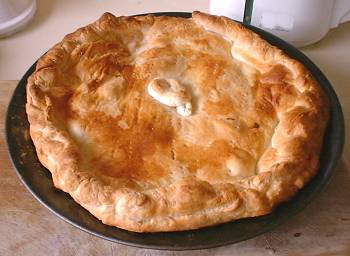 Stephan caters, of course, for all visitors.  I thought this pie looked rather interesting in production and I'm having a "what do you mean people don't cook their own food any more?" season.  I keep reading about people not being able to feed their children adequately and wondering if people are actually capable of feeding themselves in the same way they used to in past generations.  Stephan has only developed this talent in the past few years, so I display these pictures as inspiration and encouragement to others.

It rained this morning, which was much appreciated.  But because I couldn't face getting soaking wet, I left moving the cattle out to a back paddock until quite late in the day and then ran into complications - but of course!

We'd weighed and re-vaccinated the calves in the later mob yesterday and they needed now to join the larger mob of cows, calves, and the younger breeding heifers.  There's always a bit of fighting when the cows meet each other again after some time apart and so I hoped to get them all moving fairly smartly, so they'd be distracted by the walk to better grass.  Then one of the new stud cows pushed #79 into some trees and over some branches that Stephan had pruned from a Totara tree last week.  I suddenly realised that things weren't quite right, as #79 wasn't fighting back, nor was she running away - she'd got one leg caught in a fork in one of the large branches lying on the ground and couldn't free herself.  I chased the other cow away and then tried to see how to free #79, who then started pulling the branch backwards with her, toward the river-bank - a drop of several feet, which would have caused a dreadful outcome had she gone over backwards with her leg still caught on the bank!  I tried pushing her forward so she'd step out of the fork, but she just wanted to pull backwards and she's around 500kg, so my pushing didn't make much difference.  I turned her so that if she continued to pull against the branch, at least she was going away from the river bank and then ran and "attracted Stephan's attention".  It's amazing how far one can make a call of alarm sound!  It's a good half kilometre between where I was and where he was getting things packed ready to go away.

Once I knew Stephan was on his way with the chainsaw, I went back to the cow and continued to fend off the others and tried to keep her as calm as possible.  After a while she somehow turned and nearly fell over, which might quite possibly have dislocated any of her leg joints, but she regained her footing and then managed to free herself.  She limped away for a while, but by the time we walked out to the back of the farm, she looked none the worse for the experience.

Now being rather later than we meant to be leaving for our family gathering, we gave up on rushing and ate dinner, then finished packing ... 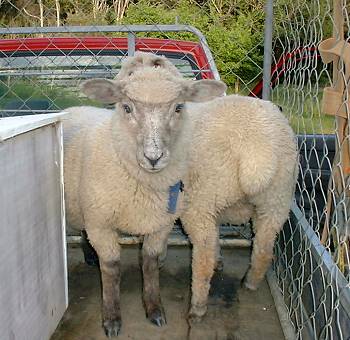 ... pardon?  Don't you take your sheep for trips around the country too?

Tabitha, Dotty and Bendy are unrestrainable, apart from when wearing their collars and tied up, and Jane is away and her garden contains many yummy things and we'd be in big trouble if the lambs spent two uninterrupted days over there eating it while we were away.  The easiest thing seemed to be to just take them with us.  After all, we were going to spend our time with Stella, who's almost two, and we thought she'd really like them.  Stopping at a garage on the way down to wash the bugs off the windscreen, we were approached by a small boy who jumped up and down in his delight at the sheep, so we figured it was worth it, just for that!

Suddenly, a shepherd appeared, gazing at the sky and raving about stars.

Stephan spent most of the afternoon looking after our dinner, which was slightly different and less than we had thought it would be.  Jill had bought what she thought was a turkey which had grown wild and free-ranging on the farm of some friends of hers and Bruce, but when we opened the package, it was encased in the wrapping of a commercial poultry provider, and was entirely the wrong shape for a real turkey. 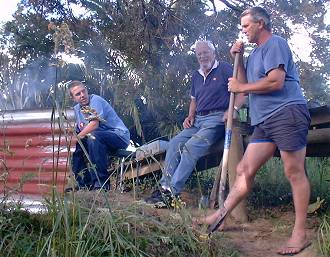 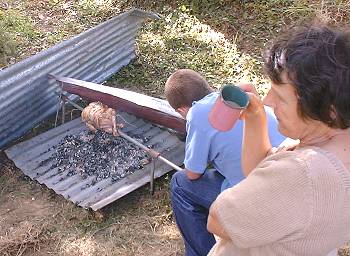 However, it still needed cooking and since there is no electricity at Jude and Roger's bach (small holiday home) we had planned to spit-roast it, all taking turns at the spit handle.

Stephan had a splendid fire of old Puriri wood, which makes fabulous hot embers, down beside the river, the embers of which he then carried up in his shovel, to provide the cooking heat for the turkey. 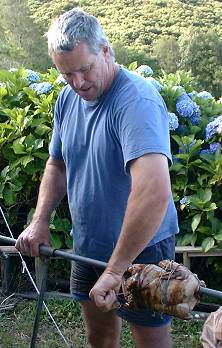 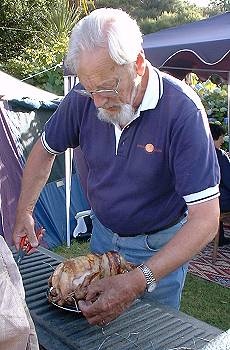 When we were ready to eat, Stephan and Bruce carried the turkey up to where the rest of us were gathered, and removed it from the spit and the wires, which had held it firmly on the spit, from the turkey, ready for serving.

After dinner, we exchanged presents, which explains why photographs of my finished first pottery pieces may never appear on this site - I forgot to take any before wrapping them up and giving them away! 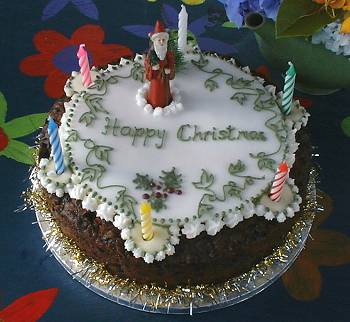 The Christmas cake had to wait until morning tea today to be approached, but was probably far better admired in the cool light of the new morning.  The cake was, as always, made and iced by my mother, Jill.

Stephan and I and our lambs then set off for home again, enjoying the scenery we'd previously missed in travelling down the Mokau road in the dark.

Travelling on Boxing Day (26 December) is always a bit of a thoughtful experience for me, and especially so today, being 30 years since a drunk man killed our brother, Bruce, as he was returning to Auckland on his motorbike, after spending Christmas with us.  I suppose people who drive drunk don't give any thought to the possible consequences to others of their irresponsibility and I wonder if the guy who killed Bruce thought about it as much as the rest of us have for the last three decades?

We were just one vehicle in a great stream of traffic on the way to destinations in both directions, until we carried on past the turn-off to the east coast and the usual haunts of the tourists and holiday-makers.

On the way up the south side of the Mangamuka Gorge, we stopped to take some pictures of a Rata in flower and discovered this little stream which, to our great surprise, runs directly under the road, through a very large culvert, and on down to the main gorge river.  I had no idea it was there and wonder how many other secrets the gorge holds for those who actually stop to look along the way? 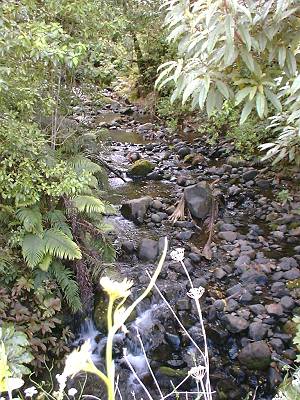