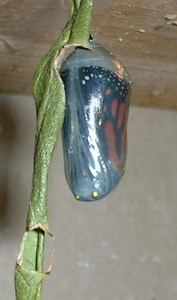 The Monarch Butterflies have begun to pupate and some to hatch.  While I was tidying up in the garden, I found a couple of chrysalises which were in grave danger of dropping from the plants to which the caterpillars had attached themselves, since the leaves were being eaten by others of their kind.  I carefully picked the leaves and hung them inside.  I took this picture this evening, of an about-to-hatch chrysalis.

Here she is in the morning - the exciting bit all happened before I remembered to look.

I forgot to look at the butterfly mostly because I got up at 6am (after a late night out at a Solstice gathering) to inseminate Isla, who had been on heat when I arrived home last night.  I decided I could probably get away with doing her in the daylight, as long as it was very early.  Then I went back to bed!

I was going to be a bit self-indulgent and put a picture of two of my favourite people on here.  Stephan and I went out to sample the best home-brewed beer in the district, with my lovely God-parents* who live just north of Kaitaia, and Stephan took a photo of us together and I have managed to lose it in the process of getting it into the computer.  Perhaps we'll have to go back tomorrow for some more beer and another photo!

(*God-parents, for those unfamiliar with the term, when I was born, were people who promised to help raise a child in a Christian manner.  Mine were people my parents knew socially and through their church activities, and with whom I have maintained close ties throughout my life, despite my not being involved in the church life of either my birth- or God-parents.)

I know, that's not about the farm and the usual stuff, but it's that time of the year, it's my website and I can write whatever I like!  You can write whatever you like to me too, just by clicking on HERE and sending me an email.  It's nice to get feedback from the site and there's simply not enough of it.  Who are you, reading my pages?  Why did you come to this site and/or why have you returned?  What do you like about it?  What else would you like to see?  Happy Christmas, if that is a festival you also celebrate.

We decided to stay home by the river, with lots of very good food and wine and complete relaxation.  We told everyone we knew that if they wanted to escape the stress and busy-ness of Christmas day for a while, they were welcome to join our gathering.  We also tried to find and invite anyone we knew or met who wouldn't otherwise be sharing their day with others.  As it turned out, the weather was not conducive to a riverside party, so we opened up all the windows and sat around the table with Grant as our single guest and ate too much and had a lovely day.  Stephan roasted one of our home-grown chickens, cooked fresh vegetables from the garden and made icecream and cheesecake to go with the fresh strawberries afterwards.
I wandered off to check the cows and the hatching ducklings from time to time and then collapsed on the couch in between times.

Onix was having an eventful day, with this year's partner, Quadrille 07.  She was still not properly on heat in the morning, when I took these pictures, but by the afternoon, it was all over.  Perhaps Issa now has a pregnant cow for Christmas. 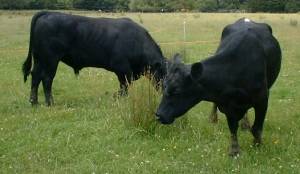 In the early evening, Gisela, one of the four women who camped here a couple of weeks ago, arrived and set up her tent again. 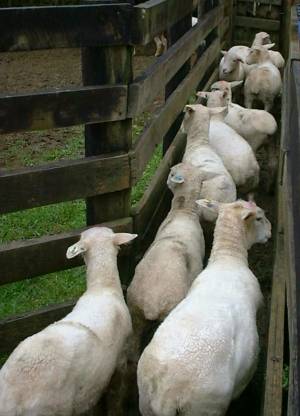 'Like lambs to the slaughter'...
... the buyer from the meat company at Moerewa visited on Tuesday and marked the lambs to go to the works.  These are they, just before the truck arrived to take them away.  Nineteen went, which still leaves us with far too many sheep, but at least we have closer to 50 now than 70.

We were complaining that we had to get up to get the sheep ready, but at least we didn't have to pick everybody's up and drive to Moerewa.  Nor do we have to work at the meatworks today, 'processing' the sheep. 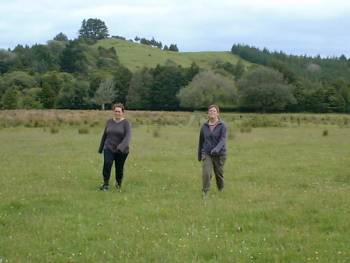 Kursty & Daniel (Stephan's nephew) and Sebastian came out to visit us for the afternoon.  Kursty, Gisela and I went out to check on the cows and to move their electric tape and discovered one young bull (Crispin's paddock-mate and half-brother) had joined Lendrich with his cows.  I don't know if the young bull is fertile yet or not, but there's a chance he may be.  Only one heifer had been on heat since I'd last checked, so he may have gone through the fence to check her out.  I'm surprised that Lendrich didn't beat him up for trying to interfere!
At such times it is a very good thing to have a couple of willing helpers.  Trying to get a little bull out of a mob of attractive cows is quite a task and was made much easier by my assistants, who then shut him back in his paddock while I went on to look at the other mob. 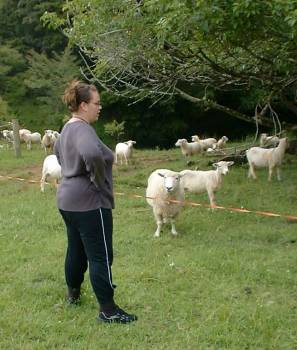 Then we went on to talk sternly to some very naughty sheep, who'd decided they didn't want to cross the river to be with all the others, but instead wanted to join the few who'd escaped through the fence to the wrong paddock!
They pretty much ignored us...
... except for Damian, who did appear to be taking some notice of what Kursty had to say. 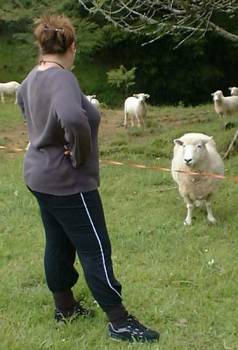 There's a frisbee lying around near our house, which travels up and down the paddock on days when I feel like throwing it around.  Mostly I have to play by myself (the cows just won't do it right), but sometimes my friends come out to play too!!!

The part of the garden in which our Swan Plant (a tree actually now, standing about eight feet tall!) grows, is being gradually decorated by more and more Monarchs in preparation.  We found a couple again in risky places, so took them inside, including this caterpillar which went through its change during the evening. 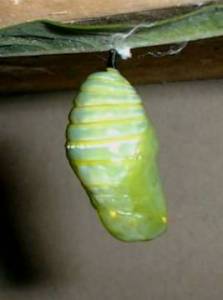 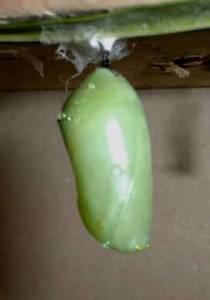