I awoke in the bus, in a rest-area next to the Broadwood road and was able, after breakfast, to walk a few short metres along the road to the Broadwood Showgrounds.  The weather was still looked a bit "iffy", but remained fine, apart from a tiny bit of drizzle for a few minutes in the late morning.

We paid our entry fee and then saw this lot coming along the road ...

Erika was back in the bus selecting photographs from her albums of their South Island trip to enter in the photography competition in the Indoor section of the show.  I was awaiting Jill's arrival with the small pot I'd given her for Christmas, the only piece of fired pottery in the district which I could enter in the show!

After submitting my Indoor entry, Stephan and I went to watch the beef cattle judging.  With our newly learnt cattle assessment skills, we had an interesting time working out which cattle we would place in the competition, were we the judge.

We watched some of the shearing and talked to people we knew, and some we didn't and altogether had a fun day.  Toward the end of the afternoon, we went to the hall to see how our various entries had fared.  Erika's photography had done very well, earning her prize money to cover her entry fees.  I made a profit of thirty cents, because my small pot had won second prize! 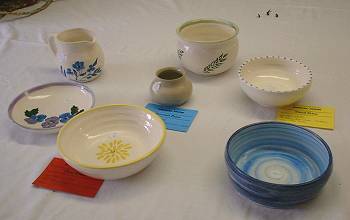 It is very satisfying to win a prize when it is obvious that the judges must have judged on form and skill, rather than only on the "prettiness" of the entries, since my little pot is both small and undecorated.

Jill and Bruce went off home to Kohukohu and Erika, Graham and the children had a string of visitors to the bus, so we set off for home.  We decided to try a different road this time, choosing to come home via the Waiotehue Road, which runs vaguely parallel to Diggers Valley Road from the Broadwood - Herekino Road through to the Takahue area.  It was an interesting drive, past all manner of livestock, around some alarming subsidence, over what remained of a slip which had slumped onto one part of the road and through far too many pine trees for our liking! 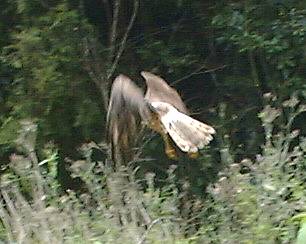 This native Harrier Hawk was quietly lunching on a dead oppossum on the side of the road and continued to stand as we drove past and then went back slowly for a better look - at which point it naturally left, before I could get a good photograph. 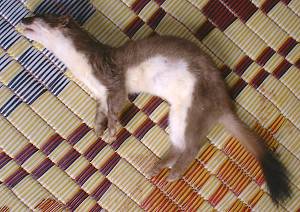 More wildlife to photograph on my arrival home: Foxton must have caught this stoat, but didn't fancy eating it...

The pigeons are getting really friendly, landing now on our hands when we offer them feed outside.  They just fly down off whichever roof-perch they're occupying and have a nibble. 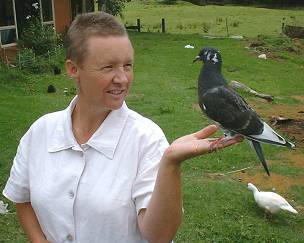 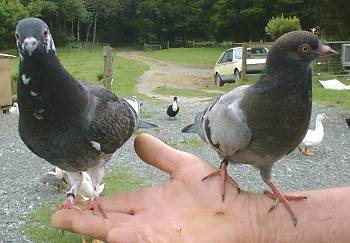 A tired Erika and Graham turned up in the bus just on dark and joined us for a drink, while the children all watched a television film in the bus, or slept.

Stephan and all the bus-family went out to one of the hillsides where Stephan had cut down most of the manuka, and brought back several tray-loads of wood, ready for storing and then cutting into short firewood lengths. 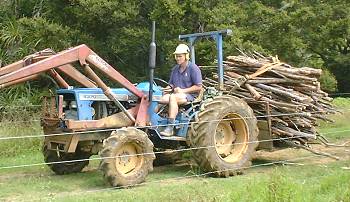 I went off out to check and move the biggest mob of cattle and took some pictures of #358, who was quite ill during last year, when his weight dropped to around 350kg and his survival was questionable.  He now looks quite recovered! 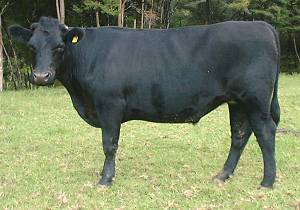 We had to be very well organised today - we've been shouted a quick trip to Whakatane on the plane, for a couple of days, so had to be ready to go by about 10am to allow us to get some things done in town before leaving.  We had to move a mob of cattle and on our way there, realised we'd not checked the sheep for more days than I had intended.  We found #30 ewe dead in the paddock and three lambs in need of attention for fly-strike.  I loathe finding dead animals, feeling like a hopeless farmer for lack of attention to the right parts of the farm at the right times.  #30 ewe had been fly-struck several times and we had only just treated her and shorn her back on the last day I checked them, so I will hope that she just died from blood-poisoning or something which provided her with a quick end.

We rounded up the sheep and brought them in to treat the lambs and then Stephan buried the ewe, we moved the cattle, checked the rest of the stock and then left at 11am - not bad going considering the extra things we had to do but hadn't counted on.

Off we went in the "flying cigar"! 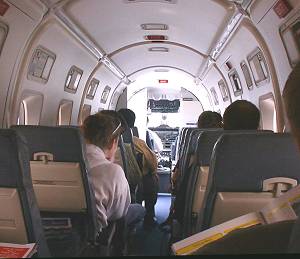 We flew out and over the farm, of which I tried to take some photographs - rather difficult through cloud and the general haze of an airplane window.  I often find it fascinating to consider how many people live here and how many live in a similar area in the cities. 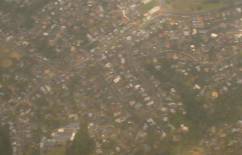 We arrived in Whakatane, were collected by Debbie and Ella and went home to their place where Stephan spent most of the afternoon entertaining Ella - or vice versa. 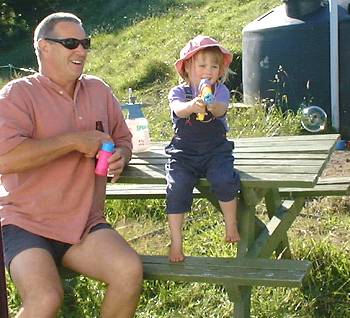 It's astonishing what one can be convinced to do by a cute two-year-old... 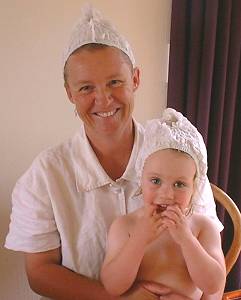 ... yes, (sigh), those are disposable nappies on our heads.  (For some of you in other places, a nappy is a diaper.)

We flew out of Whakatane in the morning, leaving fine sunny weather, but by the time we were approaching Kaitaia airport, the wind was getting very strong and it was raining.  People on the ground said it looked like we were about to land on one wing!  It felt like it too.

Erika and Kendra picked us up and we went to have a look at the Indoor Section of the A&P show, which inexplicably starts before the rest of the show, at around 1pm on the Friday.

There were a fair number of entries this year, despite our not having contributed anything at all!  Kendra did very well, with prize-winning entries throughout the hall.

This table took my fancy, with all sorts of imaginative entries by several children... 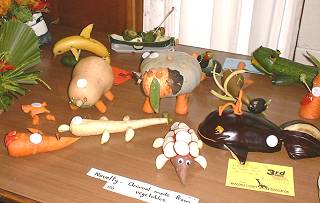 The weather became increasingly wild and we were very glad we had already decided that we would not be participating in the show this year, with the small animal section, although we intended to go to the show and have a good, and relaxed, look around.