While I'm unable to get about the place as easily as I'm used to, Stephan has taken on all those constant little jobs I normally do - like transporting the sick chicken from her night-nest-box to the grass outside when the weather is fine.

This is an oldish hen of unremembered breeding, who fell over a couple of weeks ago.  I found her lying, unable to walk, outside in the cold of a late evening.  We provided her with food and water with the other hens for several days, but then moved her indoors to a hay-lined box.  She is gradually recovering from whatever ails her. 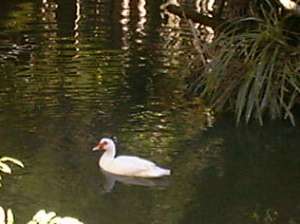 The Muscovy drake, now that he's able to fly quite well, has started wandering further from the house.  Here he was, in the river under our bridge, late this afternoon when we went out for the evening.  When he didn't reappear later on Tuesday, we finally found him, standing still, in the river.  We think he was stuck, perhaps not able to fly without a run-way space.  Stephan walked him down the river to where he could walk out and home.

Sometime late yesterday, the four new stud cows I recently bought, arrived.  When we arrived home in the dark last night, we could see four black shapes and some shining eyes in the headlights, but no more.  This morning isn't a lot better - they just keep running away from me!

Stephan went collecting firewood last week, and on his way back with a heavy load, the transport tray on the back of the tractor finally collapsed.  After a couple of days of rebuilding, with the use of an acetylene gas torch for cutting steel and some welding equipment to put it back together, we now have a sturdy new transport tray. 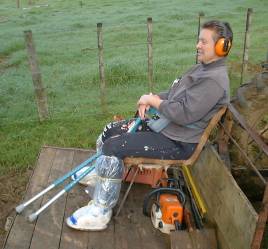 With the addition of a well-secured chair, it becomes an excellent way to get around the farm for one who can't move very fast or comfortably otherwise.

Off we went, with my legs in double-layered plastic bags to keep the wet and mud off and out of my plasters.  I think we'll maintain the tied-chair as a method of transport - very comfortable!  We went to move two mobs of cows, something I just take for granted as one of the jobs I do.  I miss being able to get out there and see them just whenever I want to. 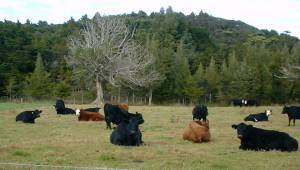 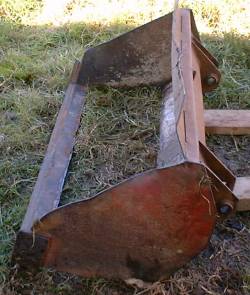 Back in the shed, the other tractor implement which fell apart over the last few months, was the front-end-loader bucket.  Too much earth moving, digging holes, getting logs out of rivers and so on, had left it more and more bent.  Corrosion over many years had left the steel quite thin in places and prone to being holed.

Resident handy-genius Stephan, has cut the bottom out of it, straightened the whole thing out by some highly alarming method I didn't see, but which had something to do with the fence-post thumper, and will now weld in a replacement piece of steel.

The vet returned for the second leptospirosis vaccination visit.  This was the booster shot for those animals who'd not been done before - the calves born last spring and autumn - and the annual booster for the rest of the "young mob".  We also did the new cows, who've not been previously vaccinated, so will need a booster shot in another few weeks.

I was delighted that the new cows, despite their apparent nervousness in the paddock, behaved absolutely brilliantly in the yards and race.  They will have been subject to regular weighing at Takou Bay (the stud farm on which they've been living), so they're probably quite used to being handled in such surroundings.

Later I asked Stephan to bring Ivy and the two heifers with her, down to the front to join the new cows.  I planned to feed Ivy some molasses, hoping that the others might recognise that it was safe to be in the same paddock with me and that I am the source of all good things in their new lives. 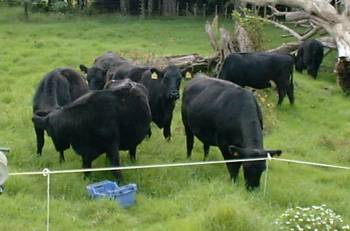 Ivy is at the front, swinging her head back to push one of the others away.  She was on heat today, the first time I've seen her since she calved last year, and the new cows were most interested in her.  The new ones have yellow tags in both ears.

The new cows are also all empty (not in calf), which was why they were available for sale.  We'll just hold them over this season, feed them carefully so as not to let them get too fat, and then mate them with the others over the summer.