We now have three stud heifer calves.  They all have the same sire and two of them are actually ¾ sisters, their mothers being ½ sisters.  The last was born this morning with a great deal of fuss from Taurikura Flower 682 (the new mum) who seemed most perturbed about the arrival of her small daughter.  The others in the paddock became rather excited in an empathetic sort of way and all hell broke loose.  They seemed to calm down considerably when I went and talked to them all.  Photos later, when Flower and daughter have had a chance to sort themselves out.

The ducklings are growing apace.  They've graduated to outdoor living (thankfully) and we've hired the carpet cleaning machine - the carpet's a bit icky!

This picture is from a couple of days ago.  They are much longer and heavier than before and they've lost the extreme cuteness of the “fluffy bobble” look. 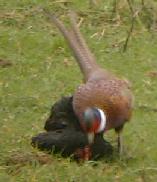 This is the x-rated sight outside our window on a frequent basis at the moment...
... a very confused pheasant.  He was raised amongst chickens, so maybe he thinks he is one.  I have set a few eggs from these bantam hens, in case the species are chromosomally compatible. 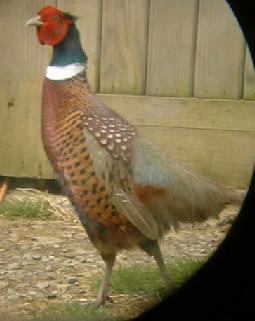 He is a bird of most spectacular plumage. I've been trying to catch a good picture of him and as he spends more and more time around the house, stalking the hens, he gets less flighty and easier to watch.  This picture was taken through the binoculars.  The colours are not quite done justice here; they are absolutely vibrant in the sunlight!

Monday was pretty good, visitors were expected and the weather was lovely and then it all went horribly wrong.  Lindertis 572 of Maunu was obviously having trouble with calving.  She being a stud cow and the calf being one we especially wanted to survive, we took the precaution of calling the vet for assistance.  The outcome was a dead bull calf; all that careful breeding isn't any good to anyone if the calf doesn't get a chance to walk out with its mum. 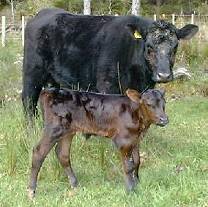 Flower and her very leggy calf. 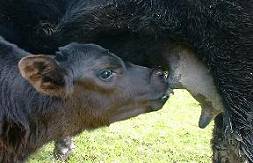 And another cutey picture of Isla's daughter.

A Pukeko nest in the middle of a paddock; one constantly disturbed by our walking about checking calves! 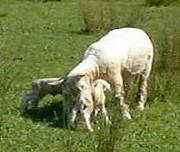 It's not terribly easy to see here, but this is a hogget ewe (one who was a lamb this time last year) with her twin lambs; they are the tiniest things. 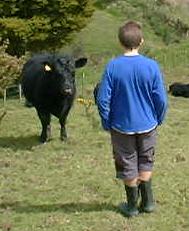 Nephew Issa and his friend Max came up for a week with Rachel (one of my two lovely sisters) and we entertained them with all sorts of adventures.

Issa having a chat with Onix, on his arrival. 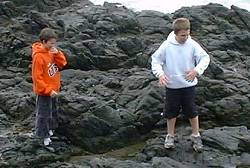 We took them to the beach and let them get wet by the blowhole we used to call our own, when Rachel and I were their age. 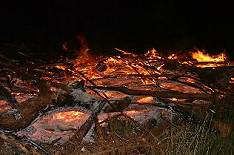 All of us went out to the back of the farm and lit a HUGE bonfire and ate sausages and fire-roasted kumara and potatoes.

Roger and Jude (my other lovely sister) came to visit as well, for a couple of nights.  This is Phoebe.  Even though she's a dog, we let her have a bit of a wander around and she didn't bite any sheep, so we were all quite happy.

We think they all had a pretty good time and it was great fun for us!  And then they all went home.