Trying to tempt rain, I went out and applied herbicide to some rushes.  Stephan sprayed blackberry bushes and then a couple of hours later, some drizzly wetness fell for a very short time, but there wasn't even enough to wash the chemicals off the plants.

Rain, at least a little: 8mm in the gauge this morning.  Our year's rainfall total to date brings us to less than half of the average to the same date for the preceding six years!

Woohoo!  Another 3½mm of precipitation!  How unpromising.

I brought the little bulls in to the yards to do some weighing and measuring.  I managed, after a bit of coaxing, to get a scrotal circumference measurement on each of them.  I ended up just standing in the race behind three of them, since they were so quiet.  I kept a rail handy, but if any of them had kicked out, it wouldn't have done me much good.  I remain immensely pleased about the placidity of my animals! 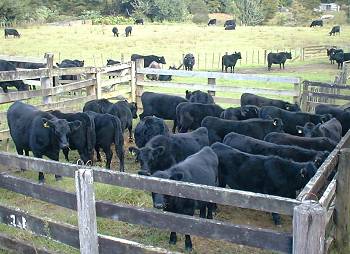 Today the calves had their first Leptospirosis vaccination and the cows had their pregnancy status diagnosed.

In the picture to the left, the twenty weaner heifers are standing in the yard in the foreground, the weaner bulls are to their right, out of the picture; beyond them are the young mob (the rising two- and three-year heifers) and the cows are in the paddock in the background.

We vaccinated the calves and moved them out of the way, then got on with checking pregnancies. 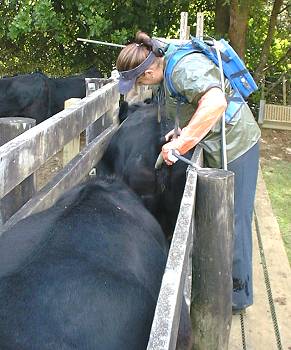 For the first time this year, the vet has a pregnancy scanner, so most of them were inspected by that method.  Any which were slightly unclear or presumed empty from the scan, were then brought back around for the usual manual palpation.  The scanner made the process much quicker and presumably less stressful for the cows, requiring the anal insertion of a narrow probe, rather than the vet's arm.  The manual check on the empty cows was both to ensure that the scanner hadn't missed something and to find out if there was any obvious reason for the cows not being pregnant.

All of the yearling heifers are pregnant and all but one of the two-year-old heifers.  The one to miss was Ingrid 17, one of Ivy's twins.  Ingrid was in poor shape at the beginning of mating, having had a hard start to life, followed by two unusually difficult seasons.  I wasn't able to feed the young cattle as well as I ought to have done and some of them didn't handle that well.

There were 35 cows, of which I knew two were not pregnant: Inga 11 didn't cycle during mating and Quean 03 had obviously slipped (aborted/miscarried) her calf in the last few weeks.

The three other empty cows were a surprise, but explainable when I looked back in my records for the mating period.  One had probably lost an early pregnancy and not held to the later mating, and the other two were very late to cycle and whilst I'd believed them to be pregnant because they'd not been on heat again since mating, they obviously weren't.

Bearing in mind the previous two seasons' weather and the consequent condition of the cattle, I think we've been quite fortunate to have so few empty cows.  Looking back through photographs I took last year, I'm appalled at how thin some of the animals were looking in late pregnancy.  We have been fortunate that our summer was much more as it used to be in years past, with warmth and good grass growth, so the cows were gaining condition throughout those months.  They're certainly looking better now than they have for a couple of years. 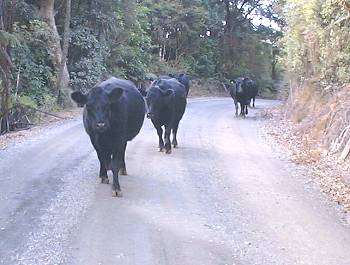 Afterwards we took the cows up the road to the little paddock on the other side of the river.  Isla led the way.  I ran for a little way, to get ahead of the cows a bit and open the gate, but it didn't work very well, since every time I ran, so did they!  Funny animals.  Still, they knew where they were going to, so there wasn't too much chance of them galloping past me and off up the road.

Liz brought the raw data report on the livers from the cull cows, faxed from the lab which tested them.  Our copper levels are pretty low, so it looks like I will have to continue with regular injections for the cattle.  Liz and Lloyd will write up a formal report on the trace element status of the herd, complete with recommendations for the supplementation programme.