Due to an unfortunate computer glitch, the photographs for this first week no longer exist and without photographic reminders, I get a bit lost!

The weather has cleared at last, so I took the opportunity today to weigh and drench the remaining cows, so they could mix again with the smaller mob of heifer-mothers which were more recently weaned.  The cows rejoined quite quietly, since they've been grazing in neighbouring paddocks for the last few days.

I weighed the stud bull calves and measured their scrotal circumferences for their EBV data.  They need to have the Liver Fluke pour-on drench, but there was a bit of rain around, so that can wait for a day or two.

The bulls' weights were as follows:

Blyth and Arran are a month older than Frederick, who was Flower's son, dropped on the ground and deserted.  Isis has been feeding him, but her milk production will have been much reduced from what we might expect in the future, by the fact that she gave birth to her dead calf two weeks before she began feeding Frederick and was not suckled in the mean time.  I don't imagine he'll ever be as big an animal as he might have been without such a check at the start of his life, but his genetics are good and his smaller size might make him suitable for longer for mating with heifers, for instance.

Blyth and Frederick are to be sold to a farmer who wishes to breed heifers for further breeding, which is a very satisfying first sale!  The bulls have been visited twice by their future owners and will leave the farm at some time in the next few weeks.

Lloyd, the vet, arrived this afternoon to administer the Leptospirosis vaccinations to all the cattle (annual booster for most of them and the first booster for the weaners who were done last month).  He also gave Quean 03 a prostaglandin injection to ensure she is not pregnant to one of the bull calves, since she has failed to be in calf at the appropriate time this year.  I shall have to wean the bull calves tomorrow, so they are no longer with the cows when Quean comes on heat as a result of the injection, within the next three or four days.

It was fine again this morning, so I brought the bull calves back to the yards and put the pour-on drench on their backs, then weaned them from their mothers!  I left them in our house paddock with old Ivy and the injured steer, with their mothers just through the fence in the next paddock.  Having them so close to where we live while they're getting used to the separation is rather noisy, but if anything goes wrong, like a calf trying to jump the fence and getting into trouble, for instance, I'd prefer to be near enough to assist quickly.

While weighing the young cattle the other day, it occurred to me that I might as well try and sell those I don't wish to keep, rather than taking them through the winter and selling them later or trying to finish them for the works.  Beef prices have been rising, so it's not too bad a time to sell.

Stephan and I drafted the five heifers from their mob, put them in the race so we could put the secondary tags in their ears and sent them to a separate paddock, while the others went further out on the farm.

I'm going to try to do a better job this year with my weaner heifers.  Usually they become part of the "young mob" and they muddle along with them for the winter, usually losing a bit of weight during the worst months and entering summer at about the same weights they are now.  This year, because I've sown a few paddocks with some winter-growing rye and will have a few less animals on the farm, I can probably manage an extra mob and feed them better separately.

I went out to where the young mob was grazing and with some patience and great skill, drafted the 11 youngest heifers back out of the larger mob.  Because they'd only been in with the others since the day before the vet came, they weren't too difficult to separate again.

Then we walked past their mothers and none of them took the slightest bit of notice of each other.  It always surprises me how quickly they slip into their independent lives again, as if they'd never had such a close and interdependent relationship.  The cow on the left who's looking so interestedly at the heifers isn't one of their mothers.

The two cows which were on the cull list this year went off on a truck this morning.  #46 was a great animal and has left three daughters in the herd, but being a dairy cross cow, she had an enormous udder which gradually collapsed, so that for the last two years when she calved, the back half was huge and pendulous and I wondered if her calves would be able to feed from it before she succumbed to mastitis.  Fortunately they did and she didn't, but I had decided that it was time for her to go before she began having problems.  The other cow, #56 was the only daughter of a Hereford bull which appeared on the farm in the first summer I was here - I sold all the rest of his progeny early on since their growth rates were so poor - and she has produced some "nice enough" calves but their growth rates haven't been great.  #56 is the last cow in the herd to have horns and although I had the vet cut them right back some years ago, there's still enough hardness there for her to give the others a bad time and she's always been a real bully in gateways and the yards.

Up early this morning to bring the five heifers in to catch their truck-ride to the Kaikohe sale. 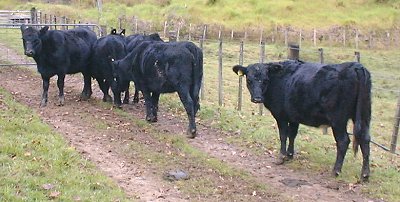 One of these is Sapphire (#444) who is Onix's first daughter.  I decided not to breed from her this year since she wasn't quite up to the standard of the others of her group.  #391 is also in there for the same reason.  The other three are six months younger, some of last year's weaners.  One of them is the daughter of a bull named Minerts Fortune 2000 who is the sire of #452, this year's biggest heifer, but as well as being fast-growing, his calves have been quite scatty.  I don't like the one I'm selling enough to put up with her temperament.

Later in the day Stephan came out for a walk with me to move some of the stock and as we were moving Isla, Quean and Isis out of the paddock next to their bull calves, I noticed that Isis was looking particularly uncomfortable.  She was straining, trying to push something out of her rear end!  I'd noticed this morning, as I passed with the sale heifers, that she looked a bit hunched, but hadn't taken a lot of notice at the time.  In retrospect, I realised that she must have been in the same state then.

We walked them into the yards and I got in behind her with some lubricant and a plastic glove and gradually extracted a large amount of extremely dry and compact faecal matter, which Isis had been unable to move.  I rang the vet for a second opinion, but what I think had happened was that because the cows were standing around crying for their babies and not eating a great deal, and possibly not drinking much because they had to walk away from the calves to the river (a whole 50 metres away!) what was in Isis's rectum had simply had much of the water reabsorbed by her system and so it all just got stuck!  I moved them onto the river-bank where there is some quite lush Kikuyu and will keep an eye on her for a couple of days to ensure that she's back to normal.

We've obviously been visited by a large number of wild pigs.... 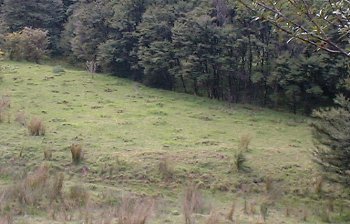 Previously that grassy area would not have been quite bowling-green smooth, but it would not have sported all those lumps!  The pigs come out of the bush, through the fences and then root around, making a dreadful mess of the grass.  They can plough up great hillsides in an afternoon or night's feeding, which destroys whatever grass is growing there and makes the ground very rough.  We haven't seen any sign of pigs for months but we'll have to get hold of some hunters again now!

We had a visit from one of the stock agents this afternoon, to have a look at the six big animals I've been trying to finish to go to the works, before the winter really hits.  There's a bit of a delay in getting animals away at present, so we'll have to wait a week or so yet.  Fortunately there's probably enough grass for them in their 20 acre hill paddock on their own, but colder weather will increase my need for them to go!