The young cattle have been up on the hill over the road for a few days, for the convenience of moving them, rather than because there was a great deal of grass there.  (It was easier to get them back to where I wanted them via that paddock, than any other way.)  This morning we went to bring them down and over the road, but had to clear our way before doing so ... 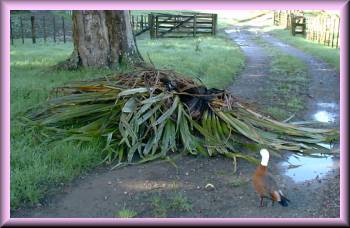 These great plants perch in the larger trees, until they get so large and there is enough rain, to bring them crashing down.  They are sometimes called "widow-makers", since if you happen to be underneath one when it falls, your future is pretty bleak!  Stephan just shoved this one off the driveway with the front-end-loader.

The cattle were pretty keen to get out of their paddock.  The grass on the road-side is often quite lush, since it is seldom grazed.  We tend not to let them stop there for long, though, since we like to get them across the road (upon which I am standing to take the picture) as quickly as possible. 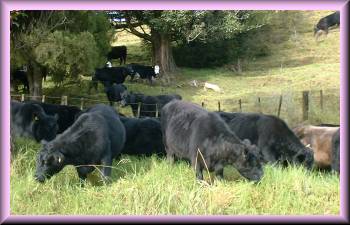 There isn't a great deal of traffic on our road, but people are travelling faster these days than in past times and there are corners at either end of the short piece of straight road over which they cross.  Anyone coming around one of those corners has little time to react if the cattle are crossing at the time.

Then down the driveway .... to the fallen lily! 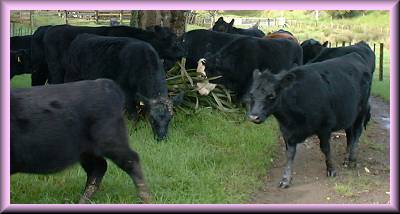 The cows love these plants.  The leaves are beautifully crisp and crunchy and don't seem to be as stringy or fibrous as they look. 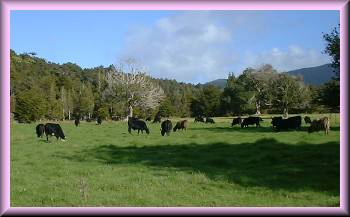 This is how the cattle live all of their lives here.  There are only a couple of paddocks in which there aren't big trees for shelter from whatever the weather may bring.

This one, which goes by the name of "The Mushroom Paddock" (because it once, long ago, supplied buckets full of mushrooms every year), has been subdivided into three this year.  Such subdivisions mean much better pasture management, so more grass potentially grown.  There are more and more paddocks into which I can now put cattle, from which I know they cannot escape!

These are the remainder of last year's lambs.  We drenched them last week and put them in this lush paddock to eat as much as they can for the last two or three weeks of their lives, before they get put on a truck to go to the works.

We have been meaning to reduce the sheep numbers for a long time, but kept being left with too many lambs we couldn't sell.  This year we've been a lot more organised than usual and we'll only keep a couple to eat later in the year.  I'll probably let my last orphan stay, too, since I'm a softie.  I accidentally sent the previous one off on the truck at the end of last year!  The last few hand-reared lambs have dissolved into the mass of saved lambs in my mind, so that I couldn't actually even remember the circumstances in which I'd rescued that one.  How awful, to be the umpteenth child, forgotten by your own 'mother'.

Stephan spent the afternoon tidying his collection of old fencing materials, searching for these ... 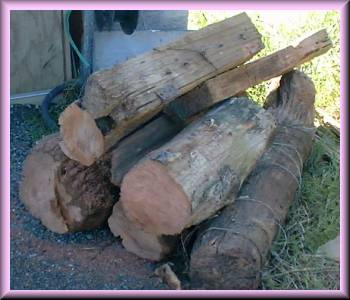 ... old Totara fence posts which might be suitable for wood-turning.

Here's the wood lathe set-up in the workshop. 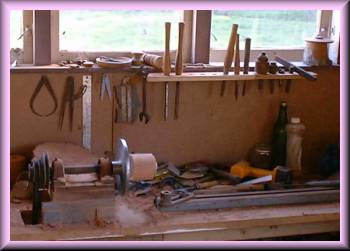 These little Light Sussex chicks now look like miniature adults.  They are about one third of their expected adult size. 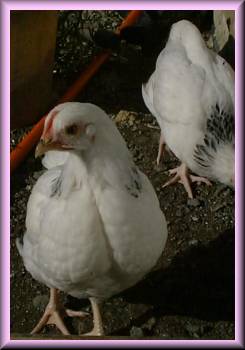 This is a favourite "dust bath" location.  Potting mix is nicely loose for flicking through feathers to help control lice, but such activity doesn't do much for the plants!  The proper occupant of this pot is long gone. 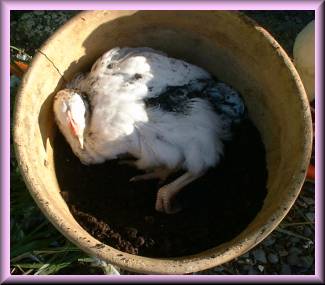 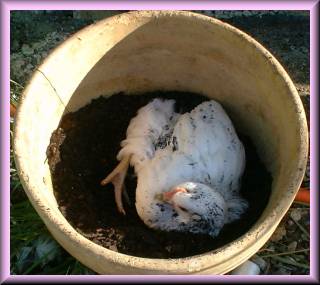 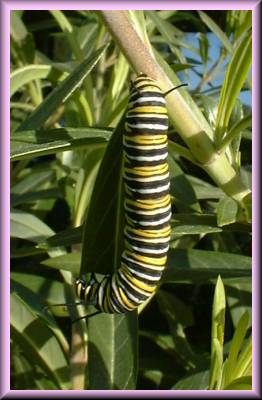 I was really surprised to see that we still have caterpillars on our Swan Plants.  The weather is getting quite cold, so I think the caterpillars must still be here because the area is protected from a lot of the wind and rain and collects any sunshine when the weather is fine.  There are more than 20 caterpillars on three plants, of various sizes, as well as at least two chrysalids.  I think that it will soon get too cold for the chrysalids to develop successfully, so I will bring them inside.

The caterpillar pictured is nearly big enough to pupate.