With the falling of an old Puriri tree, we decided we would bring the cows near, so we could feed them what we were able to cut off it as we cleared it away.  The "we" of course, is Stephan.  I just like to feel like I'm in control of things, despite still being restricted by my fibreglass footwear.  So I said to Stephan, "why don't you go and get the cows in so the Puriri leaves are not wasted?"  Stephan went off and got them in, then cut and loaded the branches and brought them to the cows.  (The area where the tree had fallen was not suitable for the cows to go in and graze for themselves.) 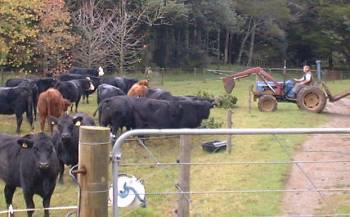 The cows looking toward me as I'm taking the picture, are Irene and Born Free, two of the new ones, who now expect something in a blue container from the molasses drum whenever I'm near, not just silly leaves!

Stephan has "planted" some cuttings and branches from the tree, in the hope that they may take root.  Puriri in the bush often resprout after falling.  I shall watch over the next few months to see if any new green life appears from the stump and surrounding roots.

This is the sick hen Stephan has been caring for.  She has progressed to this cage outside, since she can now move herself around.  She has to be in a cage to protect her from the heavy advances of Mr Muscovy Duck, who is not a gentle suitor.  (The fact that she's a hen hasn't worried him at all.) 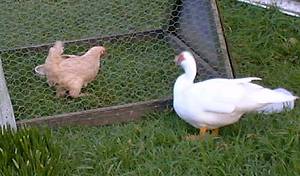 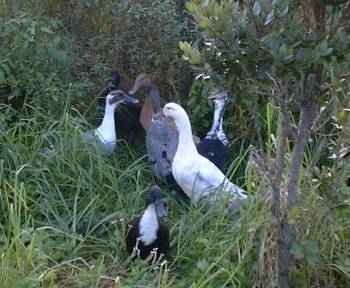 For some months, since the ducks stopped laying, they've been allowed to roam free.  There didn't seem to be much point in penning them up every night, just to let them out again the next day.  One of the downsides of that is that they often stand around outside the house in the middle of the night quacking, loudly, incessantly, maddeningly.

Stephan, being the person whose sleep-time is most constrained by his early work start, was therefore prompted to do something about that.  So, the summer vegetable garden area has been converted to a temporary duck pen.

The other reason for penning them again is that they've started laying eggs which we can't always find.  The people we sell them to like to get them regularly and we like to know that the eggs we're selling are fresh, so need to collect them as they're laid.

The previous, much larger pen, with a big pond in the center, proved impractical as the ducks began to lay more and more eggs in the middle of the water and mud.  The new plan is to create a pen with a much smaller water area, which isn't muddy on the bottom, so if there are eggs in there, we can see them straight away.  They'll still spend several hours every day (after an initial training period of a couple of days incarceration) out and about, down in the river, around the paddocks, and wherever else they like to wander.