We think that Ms Duck may have a boyfriend.  The only problem is that he has a female duck with him (that's actually her in the photograph), so we're not sure why he's spending time with our duck.  They meet on our roof and talk to each other, very early in the morning.  His companion duck sits on the grass and waits. 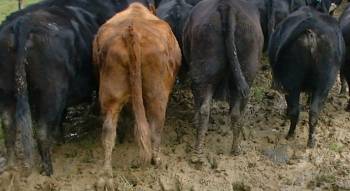 Stephan went out to check and move all the cattle around.
Here are the pregnant cows, all in great condition for the time of year.  I don't want them to be fat when they calve, but there are still a couple of months of pretty hard winter to get through yet.

They're in one of the lanes, and there has been quite a lot of rain, hence the mud!

The Peacock, after several months of looking short (with no tail feathers) and quite dull in colour, has suddenly sprouted his new tail.  It's already looking quite impressive, although only half grown.  Every year since he arrived, his tail has grown bigger and longer, with more "eyes" in the feathers. 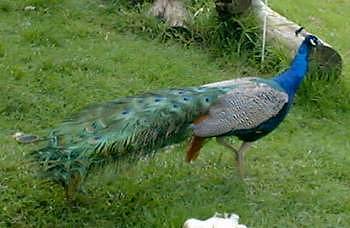 Ms Duck spent a lot of time very closely with us over the next few days, since the two wild ducks kept chasing her off her roof.  For some time she has slept on the roof at night, chattering to us from time from there and, in the mornings, peering down at us through our bedroom window, waiting for it to open so she can fly in and have a bit of a chat.  Since the other ducks have arrived, things have changed - just as it begins to get light in the morning, the wild ducks come thumping onto the roof and there's a bit of a fight and our lovely friend has to get off.  During the morning, the female of the wild pair chases her from wherever she's chosen to sit and the male comes in for a bit of a flirt.  I've been going out to show them that she has bigger friends than them, so they don't take over all together.

Every now and then, just to reassure her that here really is still her home, I've been letting her inside to sit with me.  It's rather nice, since I'm confined to sitting for long periods, to be writing or reading and have Ms Duck sitting near my feet, reminding me to stroke her every now and then by chattering to me.

Muriel, Stephan's mother, came out for a visit today.  The cattle out the back needed to be checked and moved, so we all went for an outing on the back of the tractor.  Stephan calls this "cripples' day out".  Rude man. 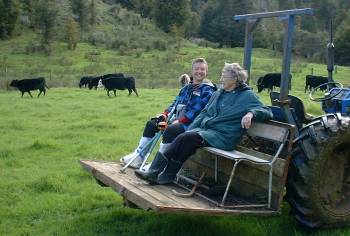 Ms Duck followed us all the way as usual, making several attempts to join us on the back of the tractor, failing only because she couldn't easily land on the transport tray when it was raised, sloping and moving erratically as we travelled through the mud.  We moved the cattle, had a look at how much grass is left around the farm, and went home for lunch.