Last week's weather "bomb", as the latest major disturbance was described by the television forecasters, gave us less trouble than we often have when they send us no weather warning at all.  We were much more fortunate than some parts of the country.

We did take some precautions against the high winds... 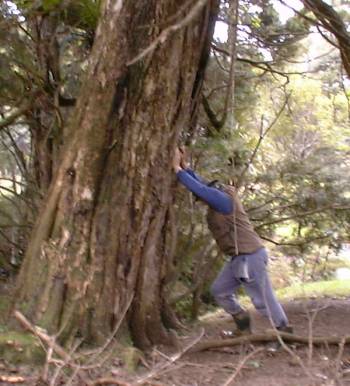 ... I guess he could come home again now.

Having felt significantly better on Friday after three days in bed, I walked gently out to move a couple of mobs of cows with Stephan and Jane and then collapsed in a fevered heap again on Saturday.  Jane and Stephan continue to take turns feeding my baby, since the wind is very cold and I've been instructed by my carers to remain well wrapped and inside.  All communications will be most gratefully received by this extremely bored sick person!

The sun is shining!  It looks like there may be no rain today, and the cold wind is not howling across the flats as it has been.  One of us, of course, has to lie still under the duvet and keep warm.  Ho hum.

A Wonderful Surprise!  This afternoon we had to get the sheep in for emergency drenching, since they were far too wormy for ongoing survival.  While we were out in their paddock, a Paradise Duck approached Stephan very closely, which is completely unusual for the wild birds.  We therefore presumed she was one of our 'children' from last year, who we've probably seen around, but not been able to positively identify.  The last time I saw our two ducks together was the early morning of the 1st of March this year.
After we'd come back with the sheep, she flew over to the house and came to me as I approached her with some food. 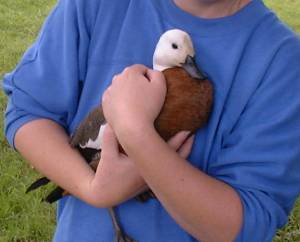 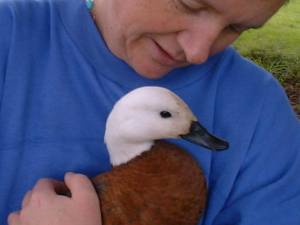 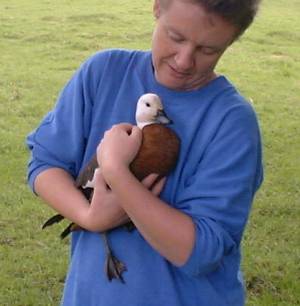 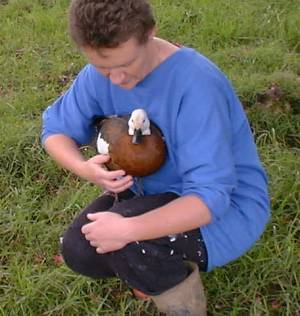 She was not this tame previously; the last time I held her was before she began to grow her feathers, when she was still quite small.  We think she might have found a mate, but since lost him to a hunter, during the duck-shooting season.  (The duck-shooting season starts each year in the first weekend in May and results in many bereaved Paradise Ducks, whose life-partners are taken from them by blokes who like to kill things.  I was confronted by half a dozen dead and bleeding paradise ducks a few weeks ago on the back of a hunter's truck and knew that amongst them may have been my two ducks.  I hate this time of year.)  Our duck seems upset, keeps calling out and may have been the one we've seen nesting where her parents were last year, in which case she is indeed suddenly without her mate, since he was seen with her earlier today.

Madam Duck climbed the wooden ramp to the bath where she and her brother used to bathe, and I hurredly added water to it for her.  She seems to have settled there for the night and we occasionally hear her call from just outside.  I hope she'll stay close for a while, at least until the killing season is over, sometime next month, I think.