Poor Stephan has the 'flu.  At least I presume I may call it that - one of those nasty bugs which lays one out for a few days and during the latter part of which, one tends to keep the paper tissue companies in profit.  Fortunately, if I provide him with enough cups of tea and coffee and feed him a bit during the day, by the late afternoon he's so bored he needs to go for a little stroll, during which he feeds the chickens and after which he still feeds me.  Thank goodness for that!  I might otherwise fade away, or have to live on toast or something, until he recovered.  (I can actually cook, if I really have to, under extreme circumstances e.g. secret casseroles for surprise parties, but prefer not to and Stephan has a particular flare in that arena - see last week's review.)

Since the poor bloke has been lying around all day, I hired some videos for him.  We finally watched "Trainspotting" about which I'd heard all sorts of things, few of which I could remember.  'E' is supposed to be the most common letter in the English language, but in that film, I'm quite sure it must be 'f'.  I was pleasantly surprised to enjoy it very much.

My poor cows, having spent some time on fairly short grass on their clean-up rounds, were looking a bit empty, so I took them out to the front entrance and let them get into all the long grass there.  After a few short hours the area looks quite different, going from lush green to stringy brown, as they took the long tops off the kikuyu grass and got down to the long running stalks.  They'll have eaten a lot of the stalky bits, but they're not keen on the lower levels, there not being much for them there.  It'll take a couple of weeks to green up again and I might give them another go at it - it has been some time since I've put them out there, having had quite enough grass to deal with everywhere else.
The front entrance is the original roundabout for the old dairy milking-shed which once stood there, and has never had fencing to prevent animals coming in or out of the area.  Putting cows out there for grazing therefore means using electric tape along the road, which is pretty reliable for most of the cows, but I don't leave them out over night, nor do I "push" them in terms of the feed still available to them, for fear of any of them wandering off in search of a better nibble.

Out of bed today at the break of dawn, and over the road and up the hill to get the six steers and two heifers in to go on their respective trucks to the works.  The heifers are off this morning and the steers tomorrow some time.  All have our initials painted on their backs, and the correct ear tags and as I write this, I'm listening out for the first truck's arrival.
This is an interesting send-off in that the steers were always intended for this and are the first we've both bred and 'finished', but the heifers were initially intended to join the breeding herd.  They've all lived here all their lives, too, so not having them around will seem odd for a while.  In a couple of cases, a trip on a truck has been threatened many, many times, for fence jumping and stupid behaviour!
The stupid behaviour was particularly in evidence during a recent weighing session.  Steer #315, who's always been scatty (Iona's half-brother and she also, when young, was of similar disposition), decided he could jump out of the race while he was on the weighing platform and I wasn't quick enough to give him a discouragingly sharp tap on his nose.  He weighed about 520kg on the day and to see that much beef suddenly rear up before one, is somewhat alarming.  He was then suspended over the top rail of the race, swinging slightly, with no legs on the ground and puffing and grunting for breath!  He eventually managed to wriggle forward enough to haul himself out into the open yard with no apparent ill effect.  There didn't seem to be a great deal I could do but wait quietly, since encouraging him either way could have meant a panicked response on his part and damage to either of us or the scales he was no longer on.

Living with someone who's full of 'flu provides a reasonable chance that one will become ill in turn.  Feeling awful, I took to my bed and stayed there, apart from mixing milk for Crispin, which these nice volunteers, Stephan (mostly recovered) and Jane (who hasn't been similarly afflicted), then fed to him. 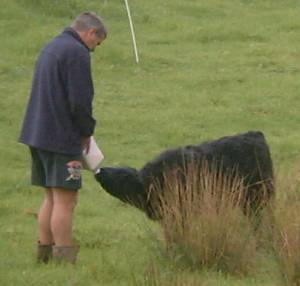 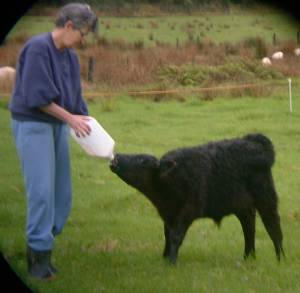 For most of today we couldn't leave the property.  The river dropped below our bridge for a short period a couple of times, but if we'd gone out, we might have been caught on the wrong side of the river and not been able to go very far down the road.
The river was in flood on Tuesday night, so it didn't take a great deal of rain to bring the levels back up again quite quickly.
At least we have power available most of the time; we did have to eat dinner by candlelight last night, but the power returned in time to have pancakes for dessert. We are thankful that we have only excess water to deal with at this time of the year, not the many feet of snow which southern farmers and their stock are living (or dying) in.

The ducks had a great time, including teaching the plastic flamingos to swim (the water usually doesn't get anywhere near their bottoms) and there was only a tiny corner of "dry" land left in their enclosure. 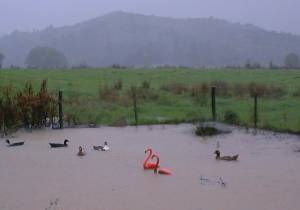