Last night, just before midnight the last (very late) autumn calf was born.  This time a bull for cow #79, who's the red cow in the background.  The older calves are greatly fascinated by their newest sibling. 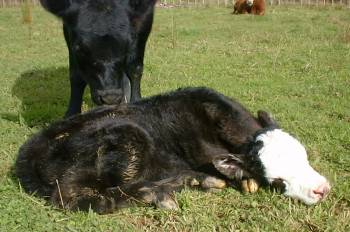 We had some guests to dinner for one of Stephan's fabulous meals.  Having suddenly recently achieved the ability to make great gravy, he presented us with a roast home-grown chicken after soup and before his newest delight, icecream to rival that of any of the boutique specialist producers.  A couple of the diners (Jill & Bruce) submitted this review for inclusion here:

"At home with Chef Stephan"

Stephan's day began early with his thrice-weekly milk-run to the Hokianga.
When we arrived at the farm, he had already embarked upon a three-course meal for five of us.  There's always a sense of mystery about what's coming up when Stephan does his cooking: mystery laced with friendly banter!

We began the meal with a superb, dark mushroom soup, enhanced by a dash of white wine and croutons.
The chicken, with walnut stuffing was golden-roasted to perfection and served with genuine gravy, carrots julienne, brussel sprouts, roast potatoes, kumera and garlic.
And then ... home-made cheesecake with a walnut biscuit base, and real boysenberry ice cream.
Pretty splendid all round ... and then, to cap it off ... coffee and Frangelico!

Our neighbour, Jane, and I seem to have walked the hills out the back of the farm countless times, looking for stock and moving them about the place.  It's been nice to have some company on walks I usually do on my own.  I think that some of the tracks have made Jane think twice about coming out again!
I have some ready-to-go-to-the-works steers and a couple of heifers who've needed good feeding so as not to lose condition before they go off on the truck.  They've been getting the best of some of the paddocks, with the young cattle following around and the cows bringing up the rear.

The kikuyu grass is still growing a bit, the air and soil not having chilled enough yet to stop it, but feed is short around the farm.  Carrying animals which need to go elsewhere, as well as the eleven autumn cows and twelve calves, is putting a bit of pressure on my feed supply.  However, we'll "unload" eight animals early next week and that should make life a little less stressful.  I just wish the rain would stop for a few days!  It's been about a month since we've had a day without any rain at all.