We brought most of the calves in this afternoon to do the secondary tagging of those going to sale, as required by the Animal Health Board and the TB eradication scheme.  I left Stephan to do the tagging (I like to pretend to the calves that I have nothing to do with anything which hurts them) and went off to get the other mobs in.  Afterwards we drafted them into two different mobs: one of the steer calves and their mothers and the other of heifer calves and cows and the young heifers.

We've also tagged the stud bull calves, since I'm hoping to sell three of them this year and the fourth could possibly go as a two-year-old, by which time tagging him could be somewhat more challenging.

I moved the yearling and two-year-old heifers after a bit more drafting.  I don't need to do anything with these cattle for a wee while, so they might as well get out of the way and go and make the most of all the grass at the back of the farm!  This mob now comprises fourteen probably-pregnant heifers, one steer, Demelza 21 and 456, the two smaller yearling heifers who didn't quite make mating weight this year.

An early start today to get the steer calf mob in, draft the steers off from their mothers and run them over the scales for the last time before they go to the sale. 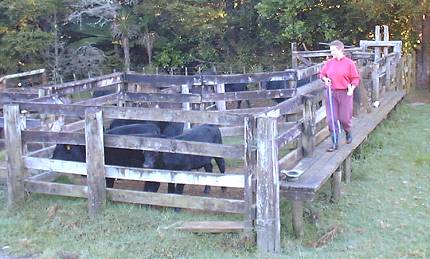 By this age, the calves are getting quite easy to handle in the yards: most of them will individually walk up the race and stand quietly on the scales platform while I note the weight displayed, then open the gate and release them out into the yard again.  (There are a couple of cows in the yard still in the picture below, just to keep the calves company.) 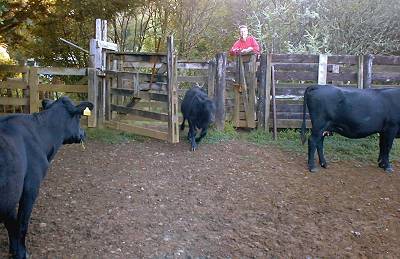 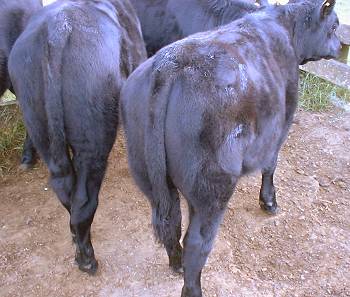 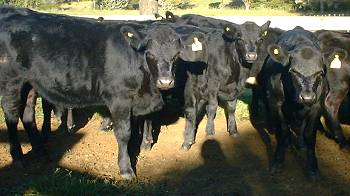 Nice bums, eh?  The calves just get better and better every year!

The truck was pretty late arriving and then we had all sorts of bother!  The calves had to go up a ramp to the top deck of the truck, so we put the first six up and then started the other seven on their way to the top.  Because the truck had a backing board and our loading ramp has a bit of board in the same place, there was a gap between the truck and the last post on our loading ramp and one of the calves put his head through there.  He was then sideways-on to the others and got pushed over and they all had to leap over him as they went up and it looked horribly chaotic and I feared for his well-being - and we got him out and up and he seemed fine.  Poor baby: it had to be 455, the calf who almost didn't make it this far because he fell and dangled over the river-bank in his first few days.  Some animals (and people?) seem prone to disaster! 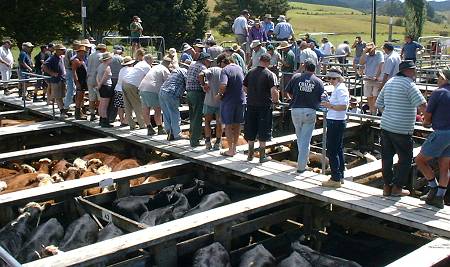 The sale-yards were as hot as ever - more so along the one side where there had been some trees and shade, which have now been removed.  What is it about some people involved in the farming sector, that creates this need to clear away every last tree?  The lack of shade at the sale-yards has always worried me, since the sales are held over the hottest part of the day, the stock in the pens have no access to water and are often packed in fairly tightly, so there's no air-flow around them while the sun beats down upon their backs!

Our calves sold for an acceptable price and will go and live in Kaingaroa, which is just over the hills from our place, towards the east coast. 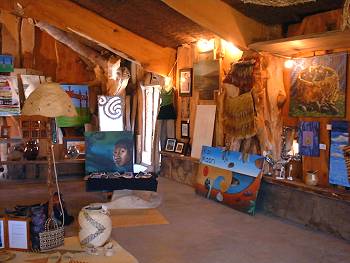 We left the sale after our calves were sold, travelling down the Peria valley to Taipa, where the sea looked wonderful, but the tide was out, so I wasn't tempted enough to swim.  Back to Kaitaia and we went to see Te Houtaewa Festival of Art and Food (associated with Te Houtaewa Challenge).  There wasn't any food left but the art-work was great, as was the building, the Tuku Wairua Centre, which we hadn't seen before. 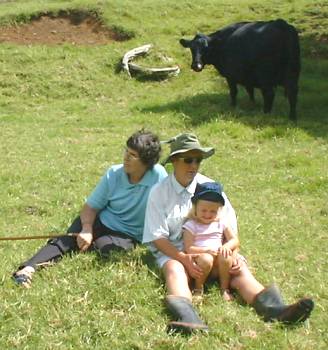 Stella, my niece who is just three-years-old, is staying with her Nana, Jill, for a few days.  They came to visit today and so we went out for our cow-walk after lunch.  We sat down to watch how cows eat, since ground-level is the best place from which to watch the process.

After the visitors had left, I brought the cows and heifers in to the yards, weighed the calves again and then separated nine heifers, which I've sold on the internet, from their mothers for weaning.  The rest of the cows and their calves went to the back of the farm and the weaned cows joined the thirteen whose calves were sold yesterday.  I'm expecting a very noisy night!

As usual, I wanted to enable the calves and cows to have at least nose-to-nose contact with each other through a non-electric fence, so let the cows gather in the top of the lane, with the calves able to stand along a short piece of fence and a steel gate.

Last year when we weaned the stud calves from their mothers, we had some problems with one of the cows, which may have been partly a result of her standing and calling for her calf and not going off to eat and drink.  Bearing that in mind, this seemed an excellent weaning set-up, because in the short fence between the cows and the calves, is a trough which supplies both the lane and the paddock.

The other very good point about this weaning place, is that it's away across the flats from our house, so we'll actually get some sleep this year, during weaning!