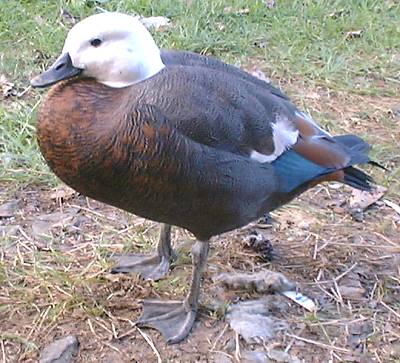 Ngaio isn't here.  I keep calling out to passing ducks, but none of them are responding.  Ms Duck and her brother left on the first of March, so maybe this is the time for Ngaio's first adventure.  We really hope she'll come back! 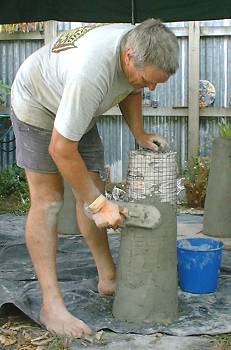 I went for a quick look at the A&P show this morning, dropping Stephan off at a Ferro-cement workshop with Jen Gay, at the Community Art Centre.  Stephan wants to make garden sculptures and when he saw the course advertised in Kaitaia College's Community Education leaflet, decided he'd do it.  As we expected, he was the only male participant.

I went to pick him up later this afternoon and watched as he completed work on one of his planters.

We came home to find a couple of tents out in our paddock: Chantelle, Mike, Eric, Stuart and Patrick had brought their newly unpacked tents and set up for the night.  We had a fire and barbecue and fed the eels and went to see the glow-worms.

Lynn picked me up this morning and we went together to the Women in Agribusiness field-day near Kohukohu.  On the way we had to stop at TRAFFIC LIGHTS!  Whilst such a thing is the daily (or minute-by-minute) grind of many who live in highly populated areas, the presence of traffic lights this far north, let alone on the Mangamuka Gorge road, is rather extraordinary!  There is a team of people working on a slip at the edge of the road and so the lights have been installed to ensure safe passage around the corner on the single lane available. 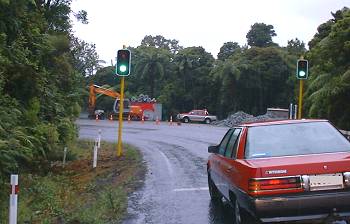 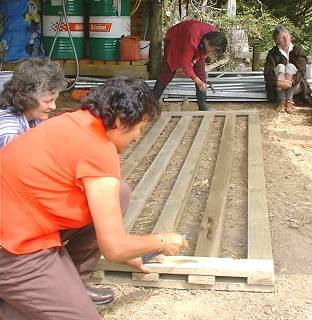 We spent the morning in a session on animal health, with vet Alan Clarkson, and then in the afternoon Trisha Fisk took us through some chainsaw basics and how to build a good wooden gate.  Looking at a wooden gate, it's pretty obvious how it has been constructed, but observing and being part of actually building one is very informative.  I probably won't build one in the immediate future, but at least I know I know how.  If my fencer's fees get too high ...

I'm still really enjoying the meetings, catching up with women I've met there over the last couple of years and we're gradually changing the format to suit ourselves.  The next meeting will be here in Diggers Valley, on Monday 4 April, with Russell Priest here again to present the next part of his genetics series (the first part was covered on 16 February last year).

Melanoma Awareness Day: the Cancer Society of New Zealand, advises that
"Skin self examination should be done often enough to become a habit, but not so often as to feel like a bother. For most people an interval of three months is ideal."
If it looks strange, don't just think about it, check it with your GP, soon!

For most people of my sort of age, too much sun-exposure as children and young teens was the norm.  Many of us basted ourselves with oil and then baked in the sun for hours, often over-doing it to the point of extremely painful burning.  We didn't know then what we know now about the sun and the lack of ozone protection above us here.  The effects of that sort of exposure can show up as freckles which change their appearance, sometimes so gradually you just don't notice and in some cases quite quickly, needing to be dealt with smartly.  Melanoma kills people, but is mostly entirely survivable if caught early enough.

I've been spending a lot of time taking photographs of the calves, partly for my own records and also because I've been attempting to sell some of them via www.trademe.co.nz, so needed some photographs for my advertisements.  I've just sold the three smallest of this year's heifers and they'll be heading south sometime in the next couple of weeks.

I'm quite pleased with this year's calves, which have reached the sort of weights at four to five months of age which the calves a few years ago were only reaching at six and seven months.  There are always a few stragglers, whose mothers' fate is carefully considered as a result. 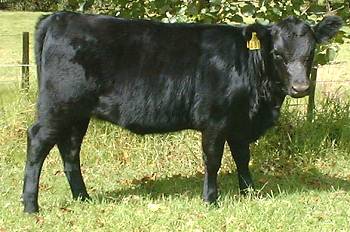 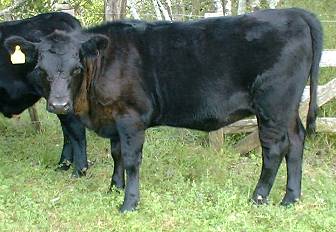 The heifers above are both daughters of Virago Crispin 13 (the bull I bottle-raised a couple of years ago, after his mother, Iona, died).  I've had to make some hard decisions about which heifers I'll keep and which I'll have to sell, since I just can't keep all of them.  #481 on the left above is for sale, #478 on the right is one I shall keep.  Such decisions are based on a combination of the calves' growth rates, their pedigrees (including whether or not I have other members of their families in the herd) and their conformation.

The steers, below, must be sold, either via internet auction, or that at the Peria Weaner Fair next week.  My stock agent thinks I'll make a better price at Peria with my young calves than I would by waiting the extra month and taking them to the Supplementary Weaner sale at Kaikohe, as we did last year, but I'm keen to try out internet selling first. 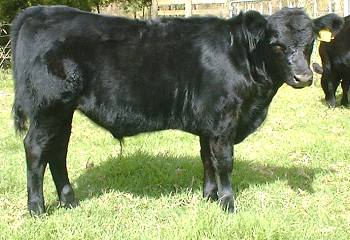 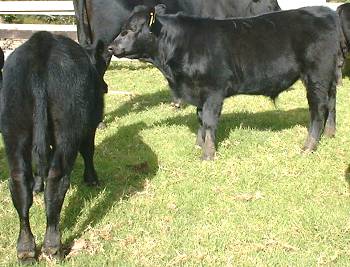 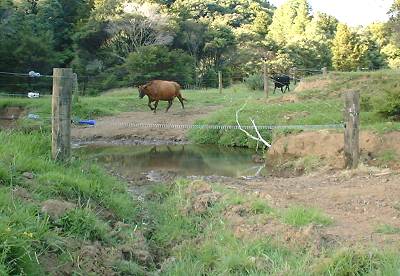 Taking the cull mob out to the back of the farm this evening after weighing the calves again, I was delighted to find this section of the previously unfinished lane, completed!  (I knew Stephan had been working out here, but I hadn't had a chance to see what he'd actually done.)  I will no longer have to keep erecting temporary electric tapes in all the gaps.

While I was working into the evening with the cattle, Stephan was fast asleep, in preparation for an extraordinary night ahead: the Royal New Zealand Ballet is coming to Kaitaia, promoted by the Kaitaia Dramatic Society (KDS) and it has fallen to Stephan to organise a necessary extension to the Far North Community Centre's main stage, according to the Ballet's requirements.  Initially he and another man were to drive to Auckland to hire some gear to create the extension, but considering the daily hire fee and the amount of time it would take to drive down to Auckland twice, he reconsidered an earlier suggestion that the extension be built from Triboard, a product of the Juken Nissho timber plant in Kaitaia.  The most troublesome constraint on this project was the prior booking of the hall by the Far North Country Music club for a concert by a visiting musician, which wouldn't clear the hall until midnight.  That left ten hours for Stephan and any helpers to construct the stage before the ballet people arrive tomorrow morning to begin rehearsals for the evening's show.  Stephan and Kees spent most of the afternoon pre-cutting the Triboard (dontated by Juken Nissho) ready for use during the night. 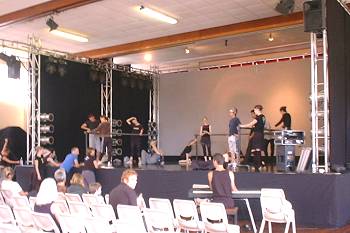 Stephan left home last night at 11.30pm and came in at about 7am this morning, after a very successful night, working mainly with Kees again and with a small number of KDS members in attendance.

Later in the day we went in to town to have a look at what he'd done and to see if the Ballet people were happy with their stage.

The permanent stage finishes just forward of the wooden beam, which forms the top of the proscenium (the 'mouth' of the stage).  By the time we arrived, they'd draped the front in black and laid their own shiny black surface on the floor and it looked amazing!

We went home again to feed animals and eat dinner, then headed back to town for a little while, sneaking in to the back of the hall during some applause, to watch for a little while and see the Ballet in action.  It was all very beautiful, but after working from 4am on Wednesday for Topmilk, then all that night on behalf of KDS, Stephan needed to get some more sleep before work again tomorrow morning!