The week beginning 7th of February, 2004.
Saturday the 7th

We have a plan to plant an area of native trees out in front of our house.  The area has been a useful holding paddock for cattle, so the parts we want to plant need to be fenced off so I don't lose the usefulness of the cattle area but also make the area for the trees quite safe from browsing animals. 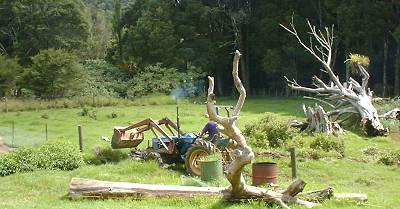 Stephan started off by doing some earth-works to drain a boggy area and get rid of some left-over pieces of the fallen Puriri tree so the fence can go past its stump.

Kendra and Lenita turned up on their bikes and wanted to be taken swimming, but the usual swimming hole is too far away from the house, so we suggested they investigate the corner of the river where it turns around where Stephan was working. 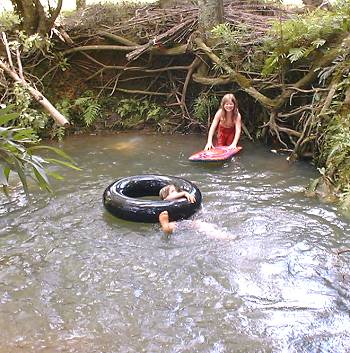 Later, when the fencing progress was well advanced, Ella got in on the act, carrying things up and down the fenceline and just being cute, really. 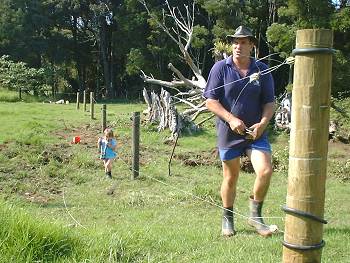 Ella came out for a walk with me, to go and see what Stephan had been doing all day.  She was fascinated by Demelza, who just watched her quizzically. 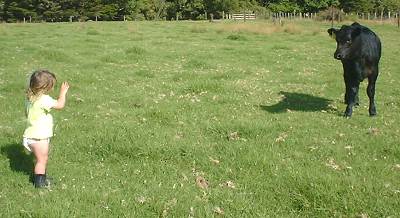 If you're nearly two, it seems you need to smell things, including cows, especially when you can actually get really close to them. 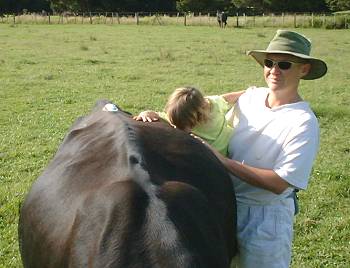 Stephan had constructed a couple of new fences during the day, one to enclose a corner of a paddock so we could plant a tree, and the other to secure the top of the long lane to the end of the flats.  The old fence had almost collapsed, which was becoming rather worrisome, especially with Crispin on the other side of it as I brought cows up the lane! 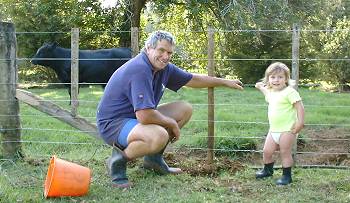 Now, of course, it's all lovely and tight and high and nothing is going to climb or jump over it!

Our guests went home again on the plane and I returned the car I'd borrowed from Erika and caught the bus home! 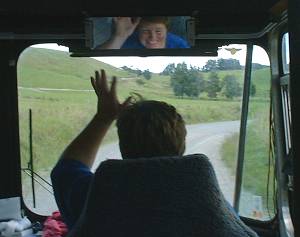 The children all wanted to go swimming, so Erika and I poured some drinks and walked across the paddocks to the swimming-hole to watch them. 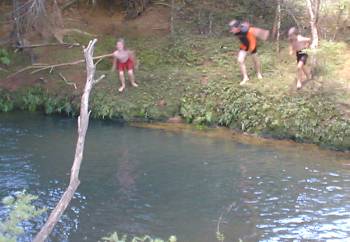 Kendra, Laurence and Lenita in mid-jump into the swimming hole.

I felt it was time to reorganise the breeding mobs of cows and their calves, since having three large mobs has been getting more and more difficult to manage and keep and eye on.  There are many cows which don't really need to be there any more anyway, being already pregnant (to the best of my knowledge).  I was keen to do some weighing of the calves, too, having not done so for a couple of months. 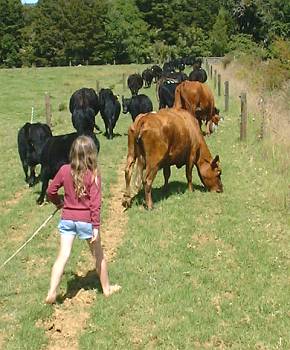 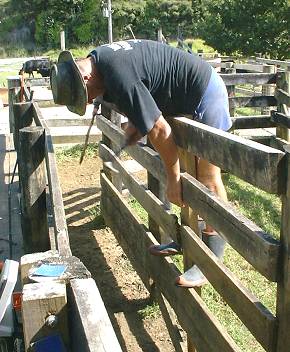 We had three of Erika and Graham's children for the day, so there were helpers too.  Apart from one of the rails in the race cracking, allowing the escape of a couple of determined calves, all went fairly well, although some of the calves, having been handled less than usual this year, are a bit nervous of us still.  Stephan did an emergency patch-up job on the race and we finished the job.

The cows and calves all made their way up the lanes to a paddock in which I mixed those from three mobs, so there was a bit of fighting for superiority to be done before they settled down for the night.  That meant taking those from each mob out to the paddock separately, so they could do the fighting where there was lots of space.  I always try to avoid mixing new cattle together in restricted areas, since they really do push each other around and if there are fences and trees or other hazards in the way, injury can result.

In the early evening, I remembered with horror that we'd seen a fly-struck ewe a couple of days ago and had failed to go back and do anything about the problem.  We set out with the crook, a bucket of maize and the fly-powder to try to catch the ewe (who looked just fine, much of the maggotty area having dried out).  Two of our friends were quite pleased to see us - Bendy and Dotty rushed in for a cuddle. 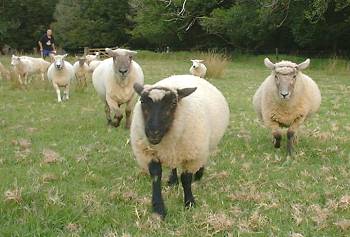 I had the camera all ready, with my finger on the button, but in my empathetic support of my partner in difficulty, failed to get a very funny picture of him flying through the air as he missed grabbing the fly-struck ewe. 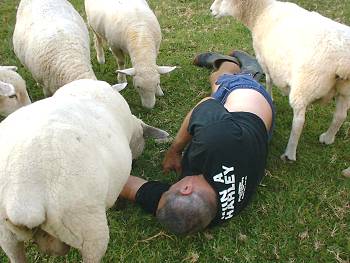 The sheep figured he was fair game and then we thought perhaps he could grab the leg of the ewe if she came close enough for some maize.  No such luck. 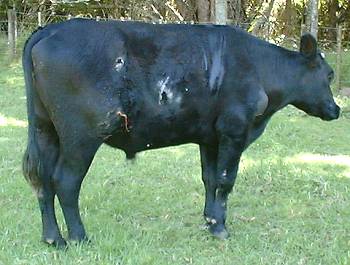 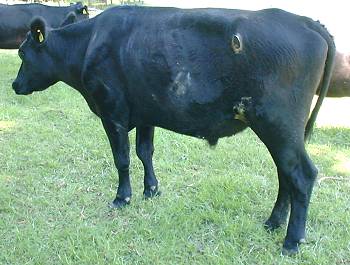 Here is #356, still very sore.  On his right side the swelling and damage to the skin has caused it to split, which looks quite gruesome, but appears free of infection and is not being invaded by flies, so we're just keeping an eye on his progress, in consultation with the vet.  He is much less willing to let me near him now, after all that has happened, but appears otherwise in good spirits.  We've only seen him lie down once since we brought him back to the house paddock and then he had some difficulty in rising again.  He rests one leg at a time, or goes down on his front knees, either trying to lie, or just to rest his legs.  I don't think there's much we can do to make him much more comfortable as he waits for the damage to repair.  Presumably he'll lie down when he has to.

More flystrike, this time on one of the lambs.  Once we had them in the yards, we could see another two were struck and needed attention too. 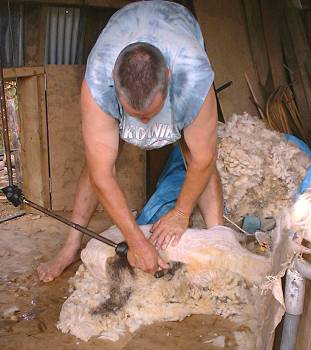 In my planting shed later this morning, I discovered a newly hatched Monarch butterfly, so watched it pump its wings up... 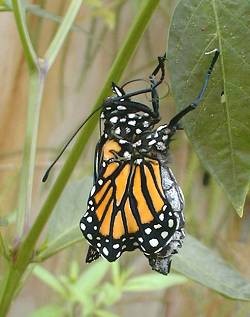 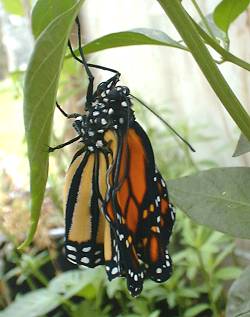 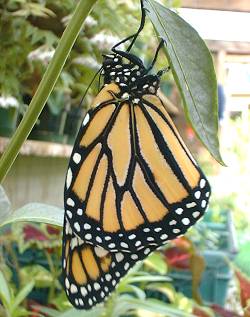 The pictures were taken at five minute intervals.  I didn't see the butterfly actually coming out of the chrysalis, but it must only just have happened before I arrived.  After the last photo, the butterfly hung on the leaf for some time, slowly opening and closing its wings and expelling the excess fluids from its new body.

Time, I thought, to let the pigeons out for a look around at the world.  They didn't seem too keen to start with, but eventually fluttered to the ground. 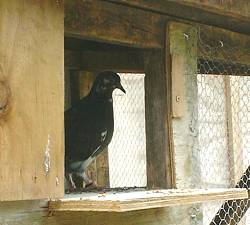 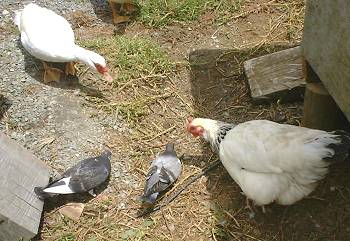 Stephan spent the day putting in a new piece of fence to form the rest of the new sheep yard area, and having checked out the strainer post at the gateway, was surprised when it broke and both the new and existing fences fell down! 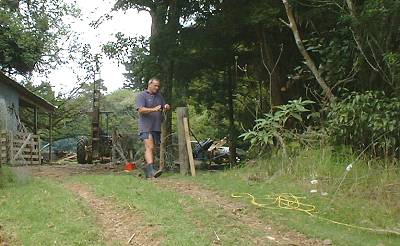 Putting the new strainer post in and re-straining the existing fence made the job take a great deal longer than he had expected.

Then dinner arrived, in the shape of a HUGE bus, with all the makings for a barbecue, which we all enjoyed, before retiring to our respective "homes". 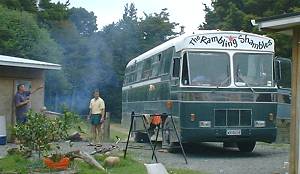