The week beginning 31st of January, 2004.
Sunday the 1st of February

On the first of January this year, we had a lot of lovely food left over and we ended up eating all the dessert left-overs for dinner.  We (being us and Erika and Graham's family) decided on a plan: the first of every month would be Dessert Day and we would get together and that would be "dinner" for the evening.  Naturally, by this month, Stephan and I had already forgotten all about it and were surprised and then delighted to welcome the nine people from down the road, into our kitchen with all the makings of crepes! 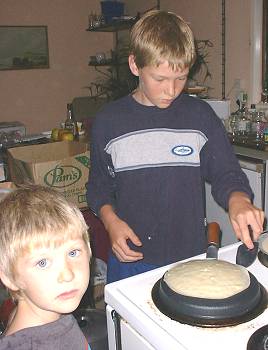 Now for the second lot of flooding in a week!  Stephan got out over the bridge at 4am and then it rained and rained and the waters came up and over all the banks.  By the time it was light, much of the water had receded and the rest of it fortunately went down quite quickly, so I was able to get out to go to the airport to meet our friends around mid-day.  Fortunately I'd left in plenty of time to allow for mishaps, so when I had to turn back from my usual route to the airport, I had time to go around the longer way.

The water which feeds our streams, then all flows down to the larger rivers which we can see from the main road and which had blocked my way along the short-cut to the airport.

The plane eventually landed out of the gloom and there were Michelle and Debbie and Ella. 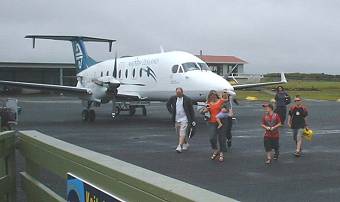 Later in the afternoon, our usual visitors arrived and had a lot of fun with Ella, while the adults all relaxed for a while. 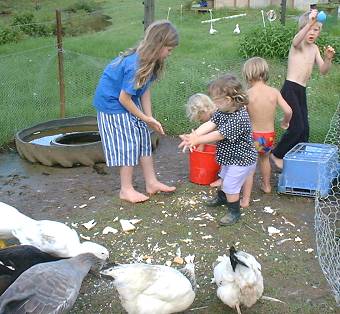 Naturally, as happens so often after heavy rain, our water supply had failed.  Neil went with Stephan, off into the bush, to fix it all up again, coming back a couple of hours later, wet and muddy! 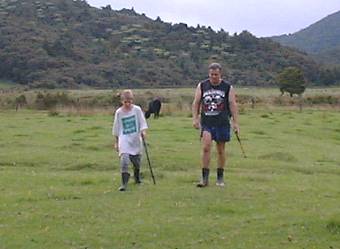 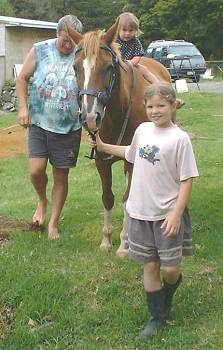 The girls turned up on their horses and gave Ella a ride.

More torrential rain.  Stephan took Debbie and Ella out visiting, despite my warnings that they might well be stuck out for longer than they intended and then Michelle and I had a wonderfully quiet day while nobody could get in to see us and the telephone system had failed, so we were completely isolated... or so we thought.
Suddenly, down by the bridge, I noticed a colourful movement out of the corner of my eye and watched in disbelief as Nut, who lives a few kilometres up the road, waded out of the flood and up the driveway!  She'd decided to come across the river to visit us, instead of walking all the way home after she got her car stuck in the flood-waters further down the road. 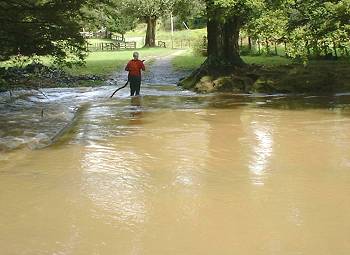 Later on, when we thought it would be reasonably safe to cross (despite her obvious lack of concern for her own safety earlier), she went back over the bridge and home. 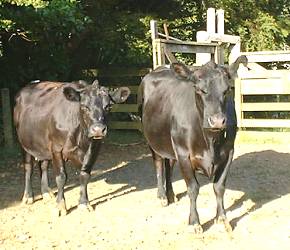 Taurikura Ranu 589 (at right, above) came back on heat and needed to be inseminated again.  I am a little disappointed, since I usually get the cows pregnant on the first insemination.  Ranu and the other two new cows absolutely must get pregnant this year, since they were empty last year when I bought them.  I must prove to myself that the reason for their not carrying calves last year was an issue of management on the other farm, rather than anything to do with their fertility.

I had more observers than usual - I have made a two-children-only rule, but somehow ended up with four and Ella on this occasion. 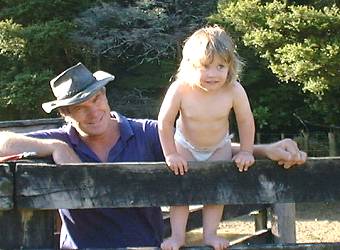