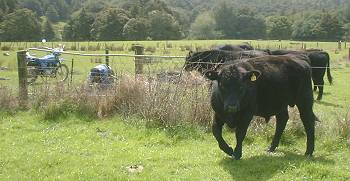 Yesterday I watched yearling bull #26 push his way through three electric fences, so asked Stephan to investigate what was going wrong.  It turned out that when rewiring the switching of the flats fences, he'd forgotten to install one feed cable for the last section of fence, so when I turned the bottom wires off in preparation for calving, I'd actually switched off the whole fence between a couple of paddocks.

So, watched by the rest of the bulls, including #26 from the wrong paddock, he dug a new cable in and fixed the problem.

I decided a couple of years ago that the ability to switch off the electric pulses to the bottom wires of the fences in the calving paddocks was necessary for my peace of mind during calving.  Cows quite often calve near fences, so the new-born calves easily stagger into them but haven't the stability nor alertness at that stage to get away from the shocks.  Within the first couple of days, calves which walk into the fences blunder part-way through then receive shocks which startle them into bolting in the direction they're heading and they then won't make their way back through to their mothers.  (I don't want to teach the cattle to disrespect fences, but when they're small and wobbly is not the best time to begin electric fence lessons, in my view.)  The other danger is that if there's a river on the other side of an electric fence and a shocked calf hurtles through it, there's the potential for a very bad outcome!

On one occasion I had to rescue a calf which had put one foot over the bottom wire of a four-wire fence then fallen through over the second wire up, trapping its leg between the now-twisted wires, through which the electric pulses continued.  Fortunately I heard the noise and wasn't far away, able to switch off the fence promptly and release the calf.  Had I not been available to release it, the calf would probably have died.
Electric fence pulses feel rather like being thumped with a piece of wood; they're not particularly dangerous except if you can't get away from them.  Repeated shocks will interrupt the body's electrical system, eventually causing heart failure. 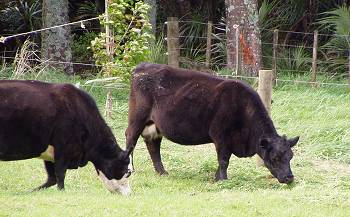 I've wanted to keep Ivy near to the house, both so I could keep an eye on her and so I can easily provide the supplements she's having.  But with the cooler weather we've had recently, the grass hasn't grown quite fast enough to outdo the grazing needs of the two cows.  The native tree area needed some mowing, so Stephan took care of both jobs in one, cutting the grass and then we fed it to Ivy and 114. 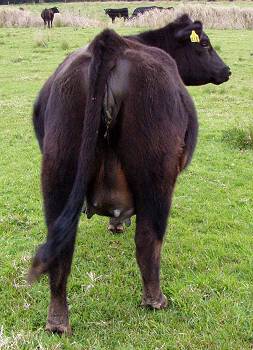 418 looked like she was getting ready to do something this afternoon.  She's all back end and udder!  I'm a little nervous about this calving, she being the animal formerly known as the Backward Baby, although I believe there is no genetic influence in which way around a calf will be born. 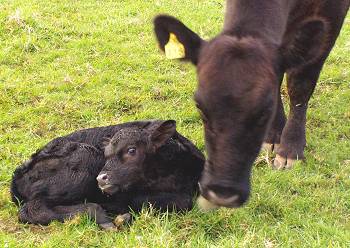 418 calved at around 2am, just a few minutes before I arrived in the paddock to check her.  I'm glad I wasn't there to worry all the way through the first part of the labour, while waiting to see which sort of feet were presented!

This is another of Arran 20's new daughters.

Just after 5pm, 363 (known sometimes as Darian, named by my friend Tem) calved very quickly.  She pushed the calf out, stood, and with an enormous amount of bellowing, pushed him over 10 metres across the ground!  I was still on my way to the paddock when all this was happening, and wondered if the calf would survive his mother's murderous welcome to the world!  Still, like all the others, he was up on his feet in short order and having his first feed.

350 calved this morning, a heifer - her first two calves were quite poor doers, so this is 350's last chance to redeem herself.  She has only lasted so long because she was her own very good mother's only heifer calf.  Unless this calf is well above average this year, 350 will be on her way off the farm.  I am however quite impressed that she's calved reasonably early, having been one of the last last year, on the 22nd of November.  It's easy enough to let cows calve later and later each year, but a little more difficult to bring them forward again.  The cows which calved late last year were in very good condition by the time they did so, the grass having really grown during their last weeks of pregnancy, and so they were in the best condition to begin cycling again, enabling them to conceive their next calf early in the mating period. 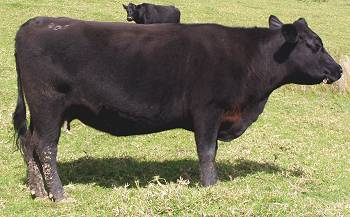 Isla is looking much better this year than in the previous two years, coming up to calving.  After the early weaning last Autumn and an easy winter, most of the cows are in better condition than they have been for a while.

This is a gorgeous spot on the hill in the afternoon, as long as the wind is not blowing.  Isla was just standing in that trance-like state, chewing her cud and enjoying the warmth.

Have you entered Isla's Calving Date Competition yet?

Grey 367 calved sometime between midnight and dawn, a bull calf.

428 started pacing her paddock this afternoon, then got on with having her calf, a heifer.  This one's sire is Glanworth Waigroup 619, a low birthweight bull of which I still had a few straws in my bank last season.  He's Demelza's sire too, as well as that of 349 and the big steer, 356.

I looked out my window this morning when I heard a pair of Putangitangi (Paradise Ducks) making interesting noises.  It turned out they were taking their six new ducklings for a walk, past the house, down the driveway and presumably to the river.  They moved faster than I could get the camera sorted out, so the picture is not as clear as I'd like.  I think they're probably our duck's parents, bearing in mind the direction they came from, but they were heading for the territory of another family, so I don't know how they might sort that out between themselves.

426, another of the two-year-old heifers calved tonight, just before midnight, with the greatest of ease.  She is the younger sister of 410 who had the slight calf-identity issue the other day.  426 was far more sensible! 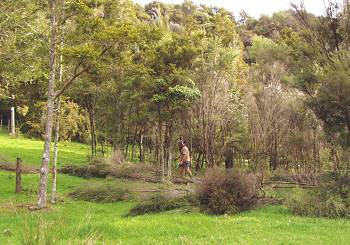 After fencing off the individual Puriri trees in the Mushroom 3 paddock, Stephan went and waged war on the scrubby trees and gorse which are taking over the back corner.  I haven't checked, but I really hope he left that tree beside him standing, since it has a fairly well established Rata growing in it - you may see the darker green foliage above Stephan's head.  He cut most of the trees down with the scrub-bar - a large weed-eater-like tool, which you may remember seeing on the 15th September. 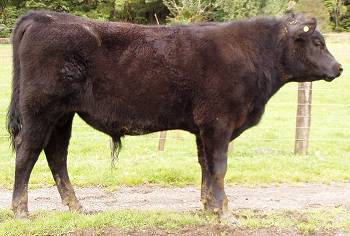 Bull #25, son of Quanda 09 and Crispin 13, is off to his new home this morning, to join a paddock full of Friesian heifers.  They will be the new heifers to join their dairy herd next season and such heifers are often mated to a low birthweight bull of a beef breed, since until the milking ability of the heifer is known, they are not used to breed more replacement dairy cattle.

Because this was the last chance to gather growth data from #25, I weighed all the bulls and then measured their scrotal circumferences.  I also drenched them, since they've not had any for several months.  #27 is still very dirty around the back end, but less so since I moved them off the lush new grass again, but they've been a bit low on feed in the old-grass paddock, which is why #25 looks a little empty!  Things get tricky at this time of the year when I'm trying to juggle several paddocks of near-to-calving, calving and calved cows!  The bulls assume lower priority for a few weeks, although their feed needs naturally don't decrease. 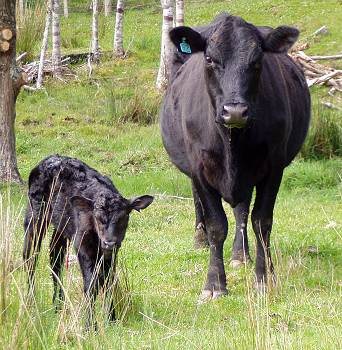 While I was dealing with the bulls, 92 was producing her calf.  She and 363 were two of the three cows which didn't calve last year, but which I kept in the herd (the other was Quean 03, who aborted this year's calf early in her pregnancy and now lives somewhere else).  This year's calf is a daughter of Merchiston Playboy, who has a number of daughters in my herd, including Onix, Issa's cow.

Later when her hair was properly dry, she appeared really fuzzy!

I watched with some amusement while Spice sat on top of the pigeon loft (a lofty name for a small box with doors and shelves for nesting) and watched the pigeons as they flew around her.  Then she fixed her interest on the one which continued to stand on top of the shed, watching her.  I looked away at something else for a few seconds and then saw Spice hanging from the roof where the light is, until she could hold on no longer and dropped back onto the roof of the loft.  She gave up at that point and wandered inside, ignoring me as I tried to stifle my hilarity at her cheek. 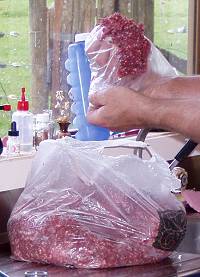 Stephan killed the planned four sheep the other evening and today the processed meat came back from the butcher as 20kg of minced meat and 53kg of sausages and sausage meat.  Stephan asked to have it left in bulk lots for him to pack for freezing in the sizes he preferred.  There were two bags of mince like the one shown and three bags of sausages, as well as all the sausage meat.  Mince and sausages can be quickly thawed and make great bases for easy-to-prepare meals, so we tend to use a lot of both.

Some of the lungs and hearts were donated to science: taken to the local college to demonstrate various things to some of the students.