The week beginning the 26th of December 2015.
Saturday the 26th
Boxing Day 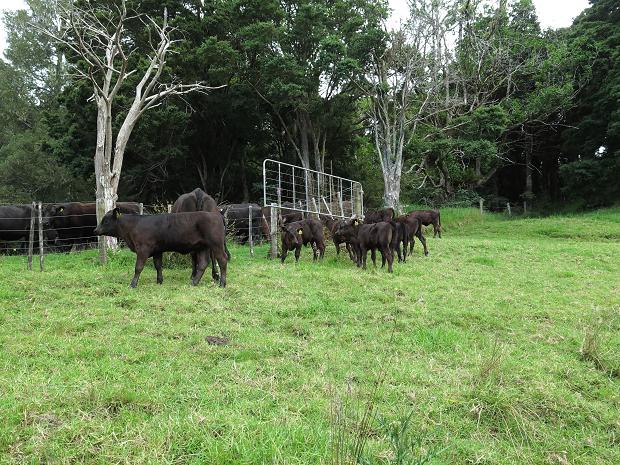 Calves are like children in their ability to be distracted by things around them and need to be kept on the job, with their mothers, going in the right direction, particularly when going through gateways!  That is especially true when those who have already gone in to the new paddock appear to be straight through the fence, so a calf does not always see the need to walk in a different direction to go through the gateway.

It is something they learn about their environments, in time.  They're pretty good at it by this stage, but still need careful attention to prevent stressful situations (for me, as much as them).

This gateway is at the boundary of the Middle Back and PW, with the PW reserve in the background.  The gate appears to be hung ridiculously high when it's open because of the steepness of the hillside. 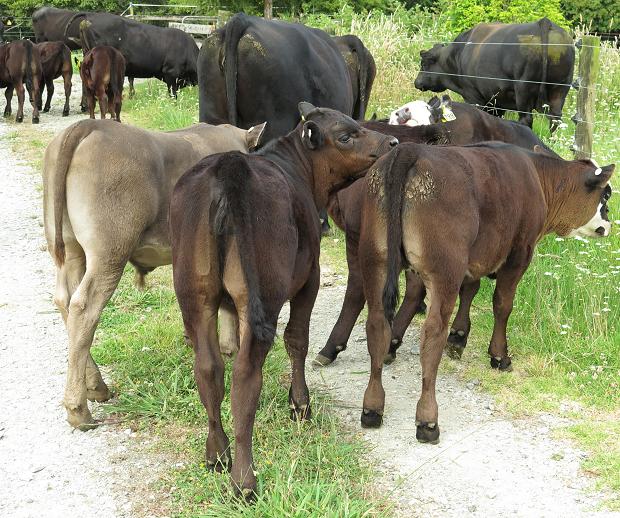 In the early evening we brought the other, older, mob of calves to the yards to weigh them and give them their booster 7in1 vaccinations.  They've all been growing at between one kilogram and 1.36kg per day which is very satisfactory.

On our way in I kept looking at Mr Grey Beautiful Bum!  The grey calves are so pretty but he's also growing really well. 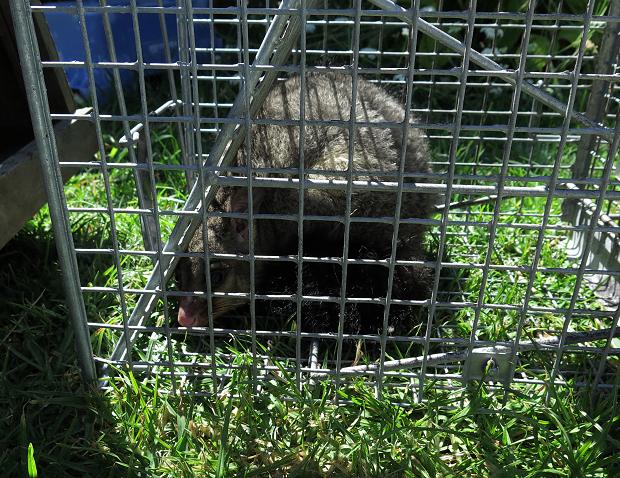 Another unintended capture in the Magpie trap, this time a possum.  We can't shoot things in this trap without potentially damaging it, so had to get the possum to walk into a live-capture trap before that could be done. 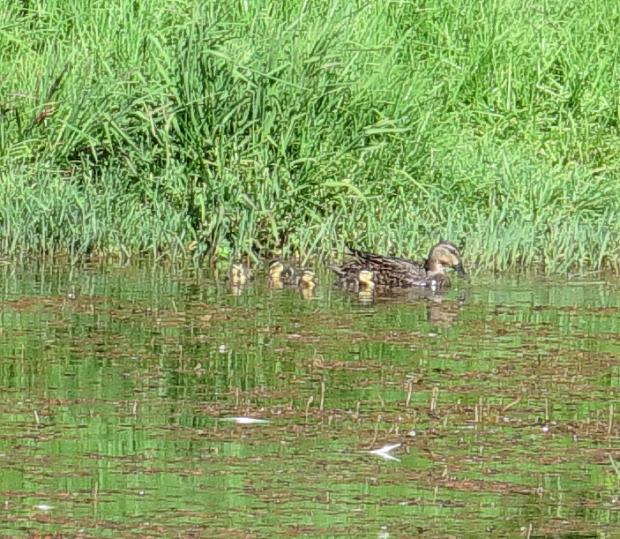 Four tiny ducklings appeared on the pond this afternoon with their mother.

I think it was during the following afternoon that we noticed there were only three, then within an hour the next one had gone and then there were none.  Their mother had taken them out of the pond at various times so we don't know if it was a cat, a stoat or an eel which found they were a tasty treat and had them all. 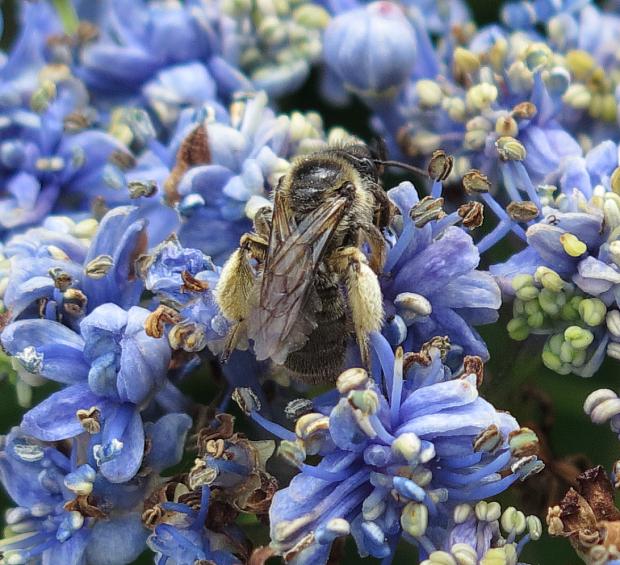 There were native bees all over the Hydrangea on the lawn today in the warm sunshine.  I didn't see any of the ordinary honey bees here at all. 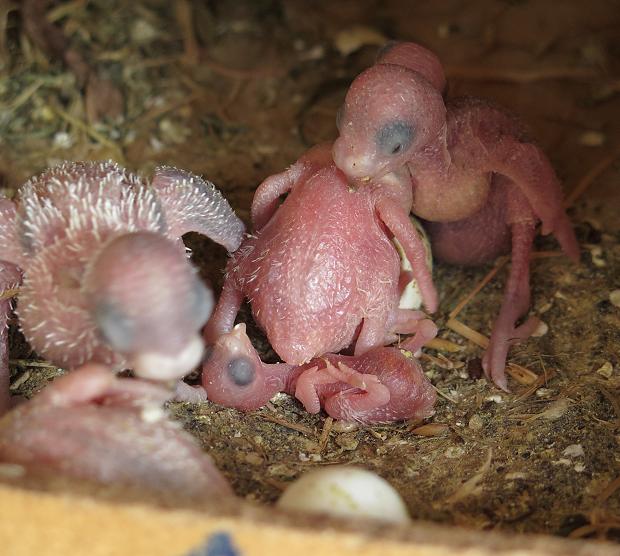 More chicks.  I think it's hilarious that the tiny babies lie on their backs.  These are the chicks of a Mauve hen and a grey/green cock.  So far their chicks have all grown up to look like their father. 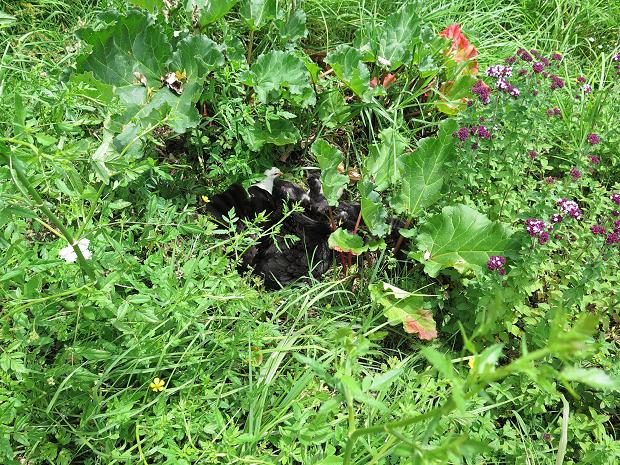 The hen took her chicks for a dust-bath in the middle of the Rhubarb patch.  They didn't look like they were causing much harm and I was happy they weren't trying to scratch up the rose garden.

In the evening we got the heifers off the hill Over the Road and weighed them, to determine which of them is big enough to join the breeding herd this season.  The smallest of them at weaning is now 329kg, just below my 330kg minimum and bearing in mind the size and growth pattern of her siblings, I'll let her through I think.  The other small one was Ida 145 at 321kg, who looked very much like she needed the assistance of some worm drench before they went onto the hill, but I ran out before it was her turn.  I put some on her this evening and will probably put her to the bull.

I spent the morning finalising my mating plan, which mostly involved working out which of the young bulls were least related to the cows in the current mobs.  (I don't want to mix the mobs before the second lot get their booster vaccination in a few days.)  I also considered the heifers in terms of their weights and their behaviour in the yards yesterday and on previous occasions.  Two rather nice yearlings are not going to the bull because I can't be bothered with their difficult behaviour, which they would probably pass on to their progeny, even though I can't really work out how they ended up that way, considering the temperaments of their mothers!

Yearling bull 137 went in with this mob early this afternoon. 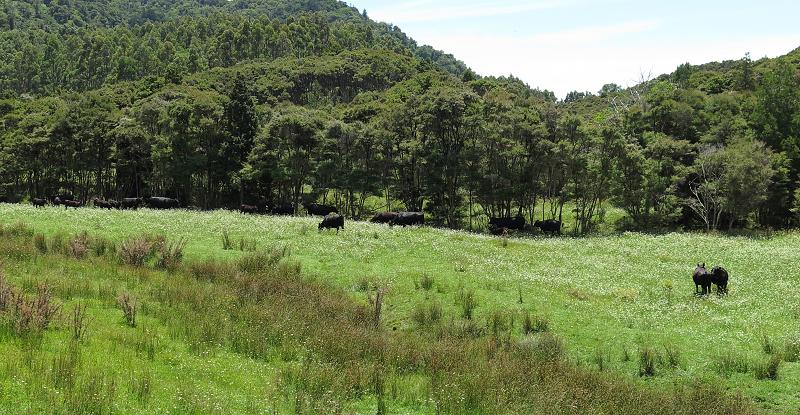 Emergency 111 and two-year-old 745 were on heat together (two cows head-to-tail at right).  I stood and watched, timing how long it would take the bull to find them.  He was busy over by the trees in the shade, checking on all the cows there. 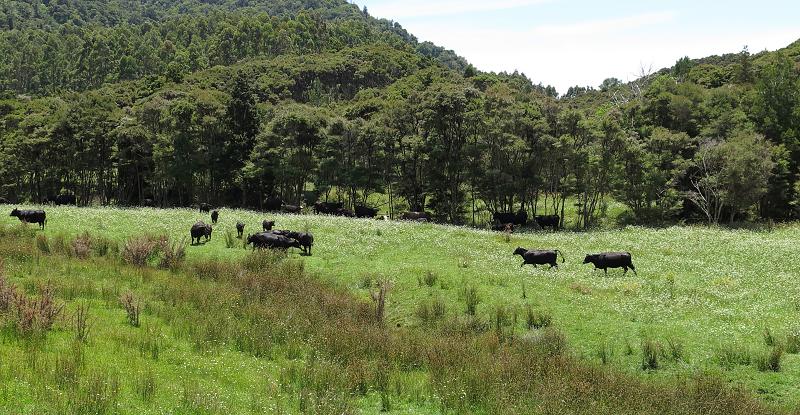 Eventually Emergency noticed the bull as he moved around the paddock and quickly made her way toward him, closely followed by 745.

144 went in with the other mob, 87 stayed with the house cows and 134 went to the heifers, since he had nice, easily-born calves with the heifers last season.

This all took a bit longer than I expected, as usual, and I was in need of some lunch, riding back down the track, trying to work out what a calf in one of the paddocks was doing and ploughed straight through an electric spring gate!  I've done that before and it hurts, so I braked really hard, the bike probably got pulled over by the close end of the spring and down I went, thrown forward and into a shallow drain, sliding over the wooden edge of the culvert and landing on my neck and shoulders.

It took me a few seconds to work out how to get up - and a scary moment wondering if I'd be able to!  But everything moved, nothing hurt like it was broken and I crawled out of the drain (shallow, dry and grassy, fortunately), tried to prop the bike up a bit to stop it leaking petrol everywhere and limped home.

I had an odd sense for the rest of the day of a parallel universe me who hit her neck just slightly differently and couldn't get out of the drain!  Sometimes you're lucky, sometimes you're not.  The bruises on my back and leg from the culvert timber were pretty sore and I had to be careful with my left hand, since it appeared I must have bent it backwards as I went over the handlebars; but it came right in a few days. 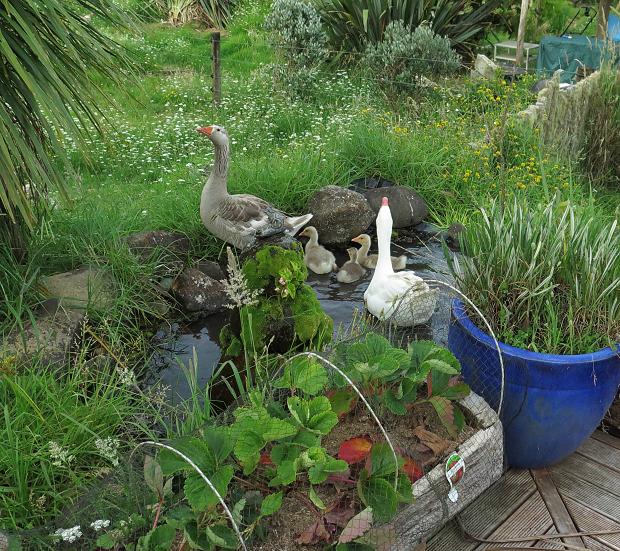 The geese have taken to swimming in the little pond by the deck.  Pretty but impractical. 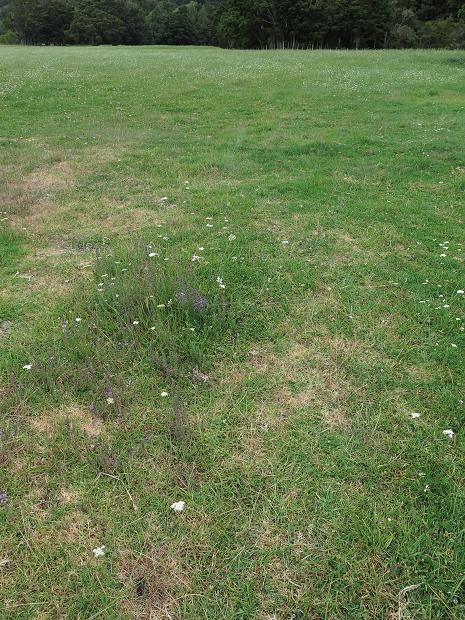 At the end of a very dry December (just under 38mm compared with the average 143mm) the pastures are getting crisp.  When shallow-earth places dry out to this extent, you know the rest won't be growing very well. 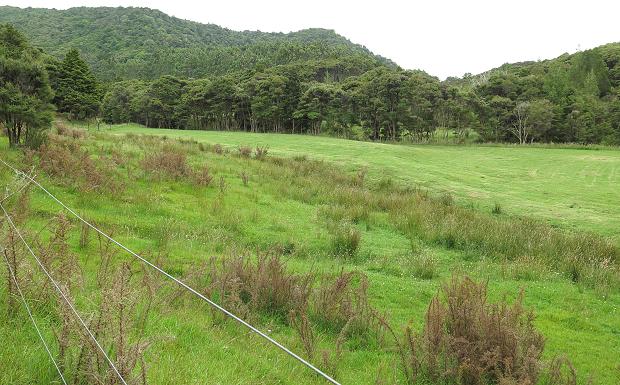 The Blackberry Paddock newly mown.  We hope to get a culvert pipe into the drain between the mown section and this other half this summer.  While the pastures are drying, there's still quite enough water running from beneath the ground to keep the boggy bits boggy.

In this early phase of the mating period I go out and check on the cattle at least twice and often three times during the day.  It helps a lot to know who gets pregnant when.

On one of those trips today I took a roll of fluoro-orange ribbon and tied flapping pieces on each spring gate.  I had marked most of them previously but it was a while ago and the sun and weather had destroyed most of those warning flags.

We did not party on this blustery New Year's Eve.

We had light rain overnight and more today, not a great amount but it fell lightly and steadily, so will do the pastures good.