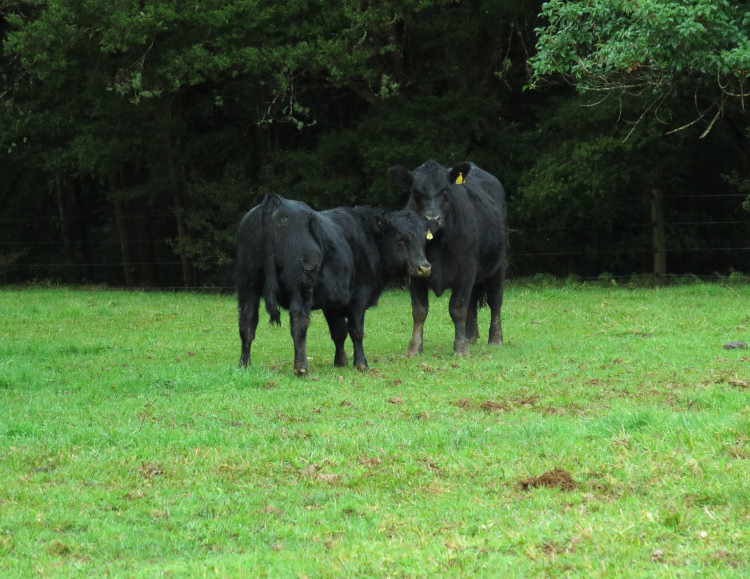 Having sat around all day writing the website, I took myself off for a brisk evening walk up the lane.

Bull 176 was having and all-out scrap with the steer!  I don't think steers usually fight much, lacking most of the testosterone that would make them want to.  The steer was most definitely properly castrated, so maybe he's just a scrappy individual.

Weight-wise, the little bull is about 70% of the steer's size.  Aggression-wise he was holding his own. 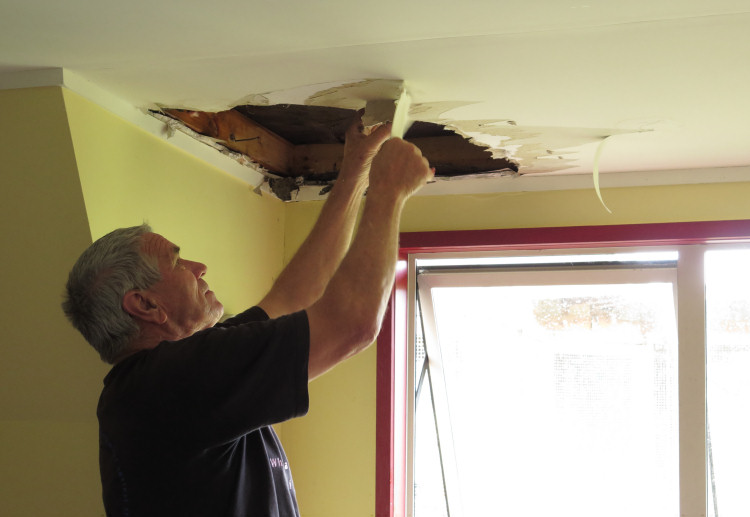 We've been living in a leaky home for a while.  I can't remember when we first noticed the damp patch in the ceiling but it gradually spread out and then appeared in another part of this area.  Eventually there were actual drips and more recently almost-streams of water.

Stephan has been all over the iron on the roof to try and see where there are any holes, used quite a bit of silicone to try and seal anywhere suspicious but still the water gets in.

Once the ceiling material was all removed, I got up here with a torch during the next rain to see where the water was coming from: two nails were wet and water was dribbling down the wood beneath them.  Stephan got some roofing screws, more silicone, replaced the nails and there's no more water.  He says he'll do the whole roof now, since it's likely not an isolated problem. 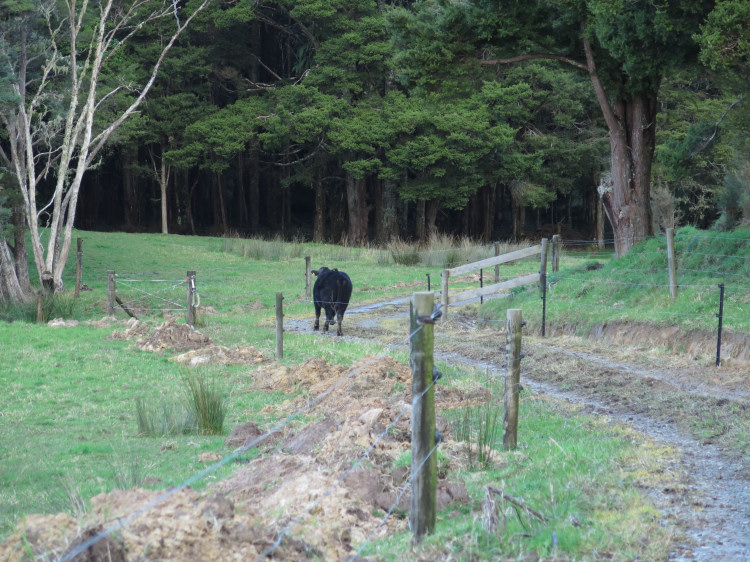 I brought the youngsters down to the flats from the Spring this afternoon.  They all took off along the lane while I closed gates behind them; but here, behind all the others was a different straggler than our usual Spot 169, this time Gina 168.  Same family, a couple of generations further down the line.  Was she distracted, or does she have the same trait?

I went to visit "the Godmothers" today, on my way to a Chiropractic appointment.  I haven't seen Aunty Margaret (for so she prefers to be called) for a couple of years, although I've phoned her a few times.  With her was Rhyll, who lives a pleasant walk away, along the other end of Coopers Beach.

Margaret and Rhyll are both Godmothers to Jude but Margaret has happily assumed the role in my life too (who doesn't need a godmother at 52, I ask you?) she says, since Claire Simms died when I was very young - old enough to remember her, perhaps when I was about six or so?  My other wonderful godmother, Marj Matthews, died nearly ten years ago, so I do like going to see Margaret.  The two women are well into their eighties now but both still in full and firm possession of all their marbles.  I took the budgie with me, so I could feed it during the hours I was out, which greatly entertained them.

It's hard to find enough feed for the pigs without spending a lot of money on grain-based pellets, after the cow stops milking, so Stephan had booked the two of them in to the butcher today.  I suppose I had better allow anyone who doesn't want to see where meat really comes from a link to by-pass the details.  (You can sneak a little peek at one of the live pigs in the next picture first, if you like.) 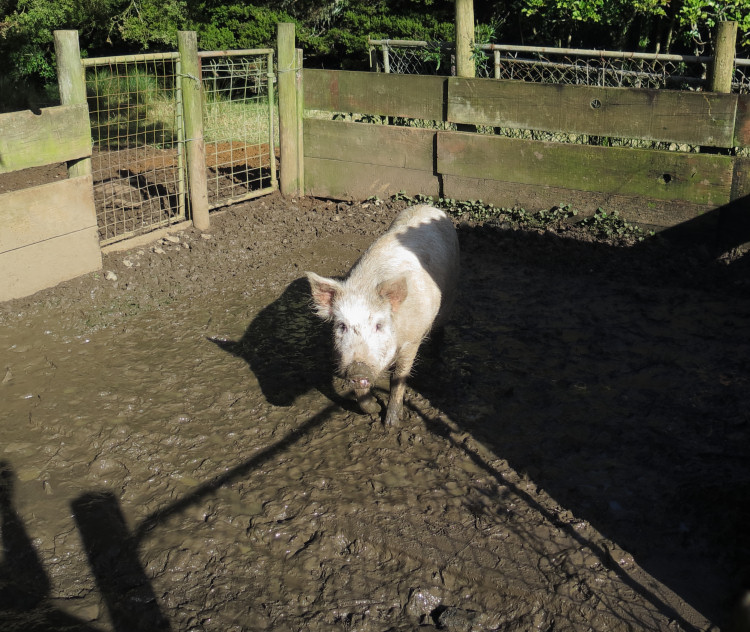 I left Stephan alone to shoot one of the pigs then went up to help him with the processing.

This is the other, quieter one.  It always interests me to see how the animals behave after one of their number is killed.  For all that pigs are very intelligent animals, they still don't rationalise that what just happened to their companion might be about to happen to them.  I doubt they rationalise death at all.  This pig seemed quite calm, after the other pig had been shot and removed.  Life is just a series of moments and as long as the present one is comfortable, what more can one ask? 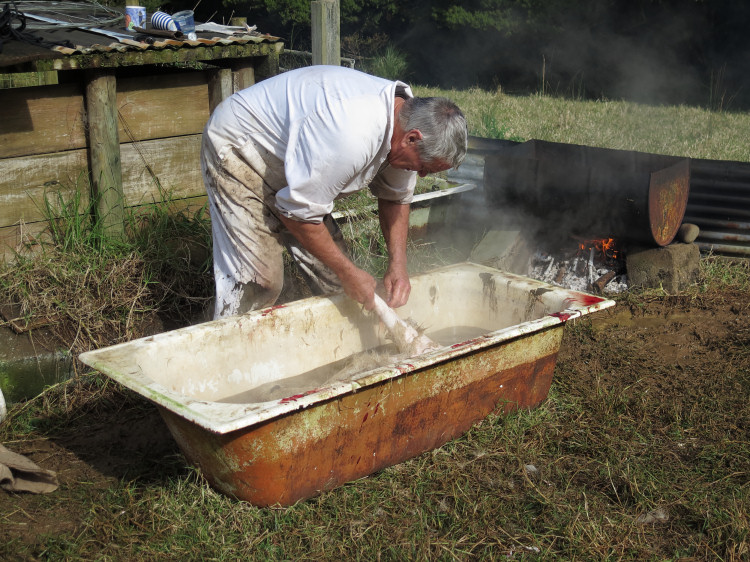 Stephan went back to his old water temperatures for scalding the dead pig and it all worked perfectly.  The trick is to have sufficient hot water boiled to keep the bath water hot enough.  When he'd not been sure he'd remembered the temperatures correctly one year, we looked up other people's instructions but they didn't work nearly as reliably as the way he'd always done it before. 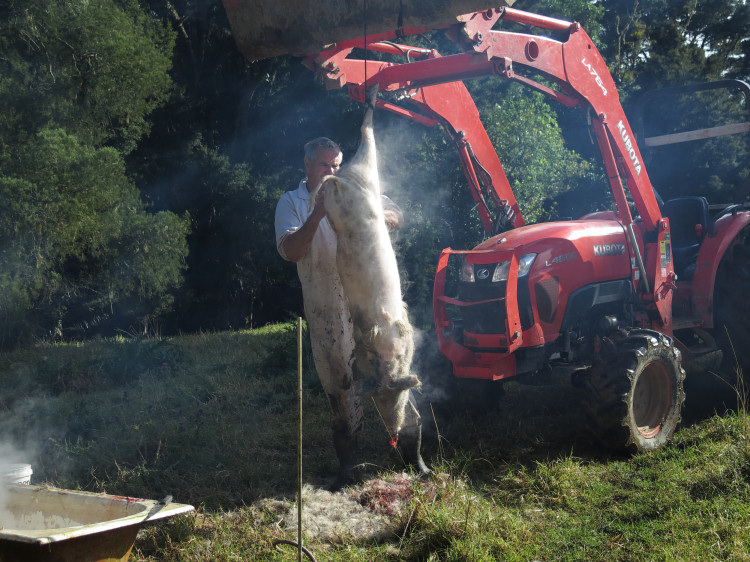 Spot the safety error in this photo: I took the picture and then realised there was no prop under the front-end-loader bucket.  It's unlikely that the hydraulics would fail but it would be catastrophic if they did.

We both used knives to scrape the hair and top layer of skin from the steaming pig. 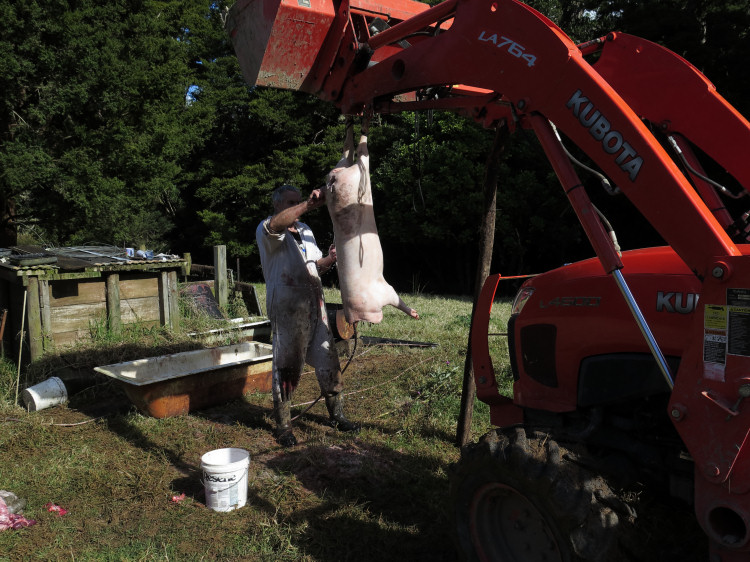 Both pigs cleaned off really nicely.

Then they went on to the back of the ute wrapped in a clean sheet, ready to go to the butcher.  There they were hung in the chiller before being chopped up for curing for bacon and ham, with a couple of shoulders going into the freezer as roasts. 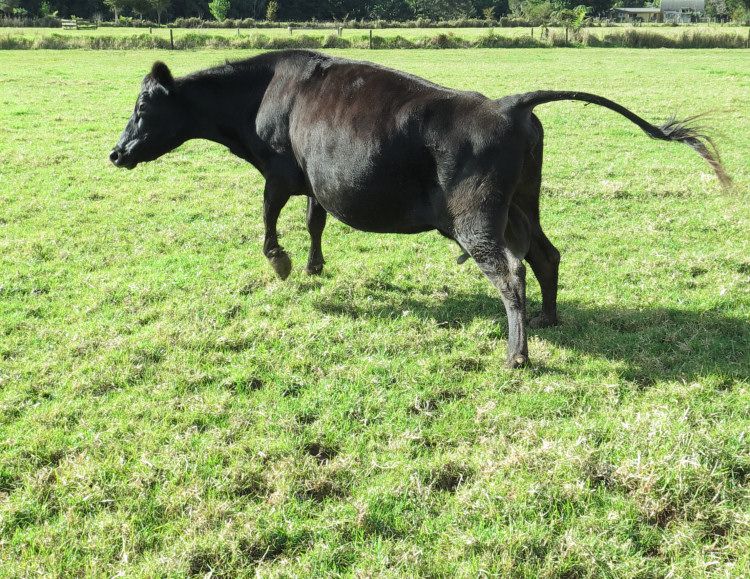 I took some hay out to the heifers but none for Zella and Demelza and I could see Zella looking expectantly in my direction, so I walked over to see her.  She started bounding around in excited circles on the other side of the fence, lunging and snorting.  I walked down the fenceline toward one of the Puriri with low branches, she still bouncing along beside me.  I fed her an armful of leaves and took a few back up the paddock to Demelza.

If you still don't want to look at where delicious bacon comes from you'd better use this link on the way back up the page. 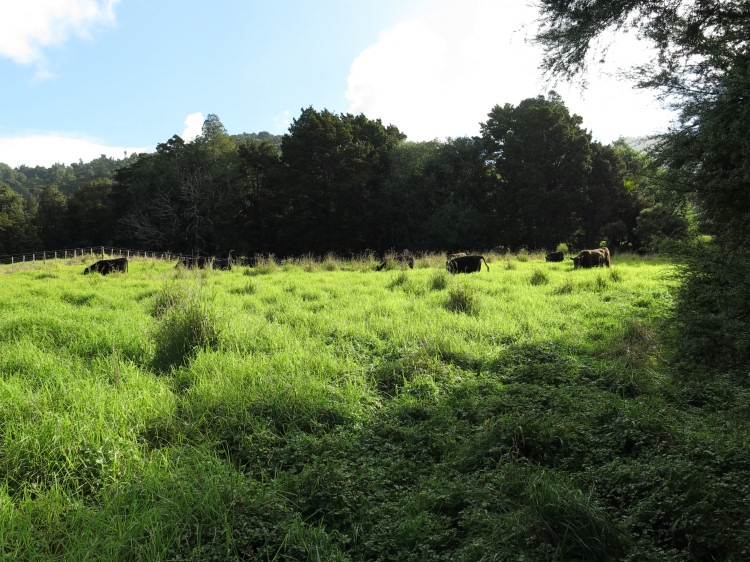 When the heifers had finished their hay I called them down to the end of the paddock and across the stream, into the long grass in the Road Flat, which hasn't been grazed for ages.  Fortunately the Kikuyu here has not suffered any frost damage. 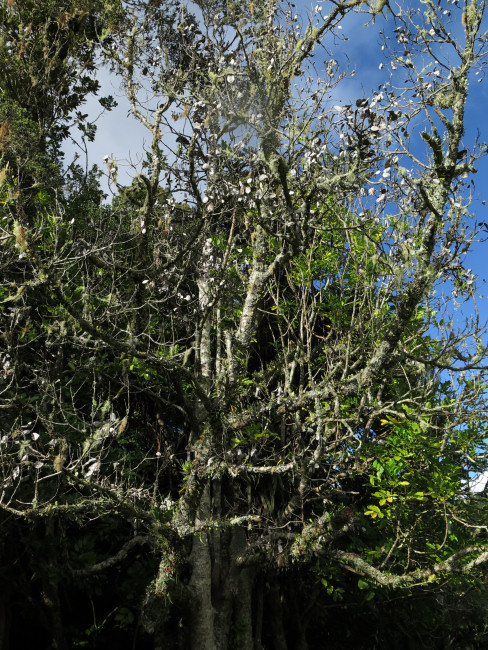 This is a dead Taraire, Beilschmiedia tarairi.  I have noticed a few dead ones around lately, mature trees like this one.  I wonder what's killing them?  We're all very concerned about Kauri Dieback but what if all the Taraire quietly died and nobody noticed while we were looking at Kauri?

I see there was a spot on my camera lens! 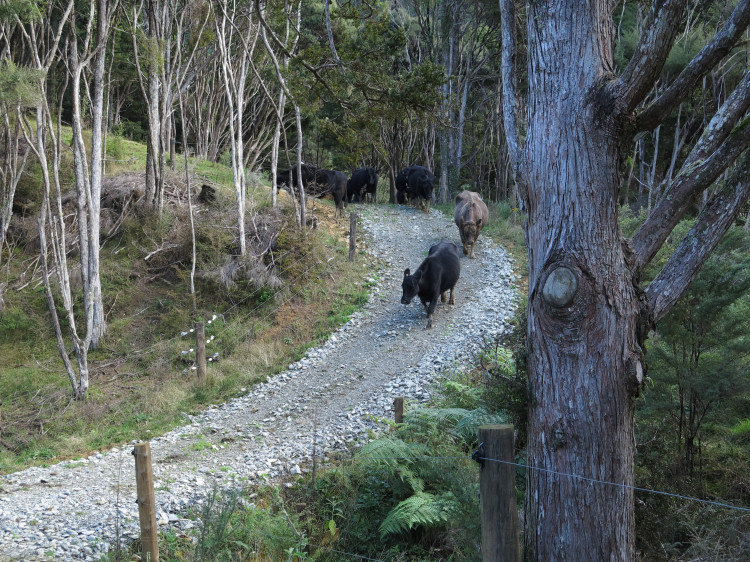 I called the cows out of the Middle Back along Route 356 and directed them down out of the gate and around to the Swamp paddock.  Sometimes they move really nicely and just as I wish. 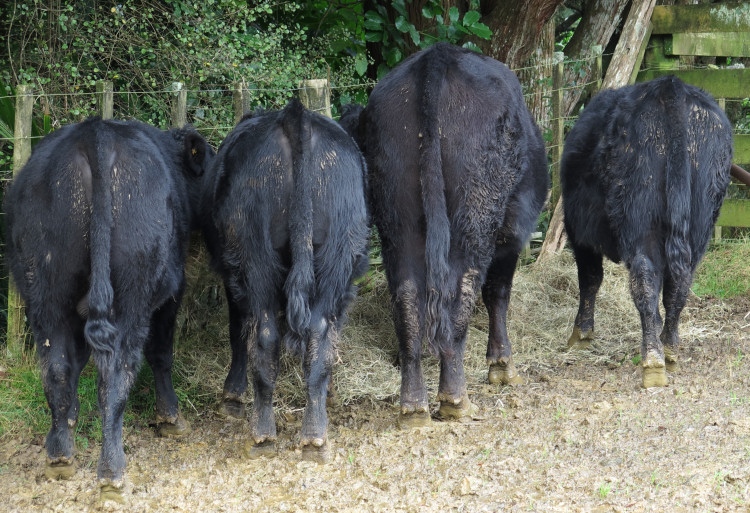 Focus 176 is Fancy's son and I've liked the look of him all along.  I'm less keen on 178 but he was looking acceptable when the castration decision was being made, so we'll see how he turns out.

I had a couple of appointments in town today but didn't get the phone-call about the truck until just after Stephan had loaded the ute with some firewood to take in.  The plan was that he would go and deliver that while I was busy.  It was probable (and the way it turned out) that the truck wouldn't arrive until later than advised but I knew I'd be anxious about it coming on time - and on rare occasions they come early - so Stephan stayed home and I went and did the town things.

Truck drivers often load stock on their own but we try always to be present, partly to ensure the animals are loaded quietly, since we know them so well and also to keep boots from other places out of the main yard working areas.  There is no way truckies will ever clean their boots between farms, so we restrict, as much as possible, where they tread when they're here.

Jill reported later that the little bull was very quiet when he arrived, calming the other one they'd bought, who was on the truck with him from further south.  I am beginning to think I make some of my own animals nervous, since when they go and live elsewhere, they're really calm.  Better than the other way around. 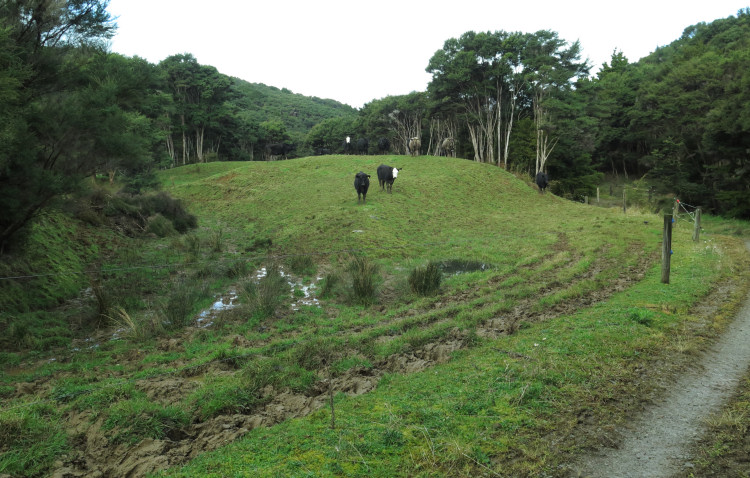 Winter always feels miserable.  I called the cows to follow me from this, the Swamp paddock, up to the gate into the Back Barn behind me.

They're all in nice condition still.  The trick is getting their feed levels right so they stay that way, or only lose a little weight and if you get it wrong, things can look very different six weeks later, when the effects of a feed pinch show up. 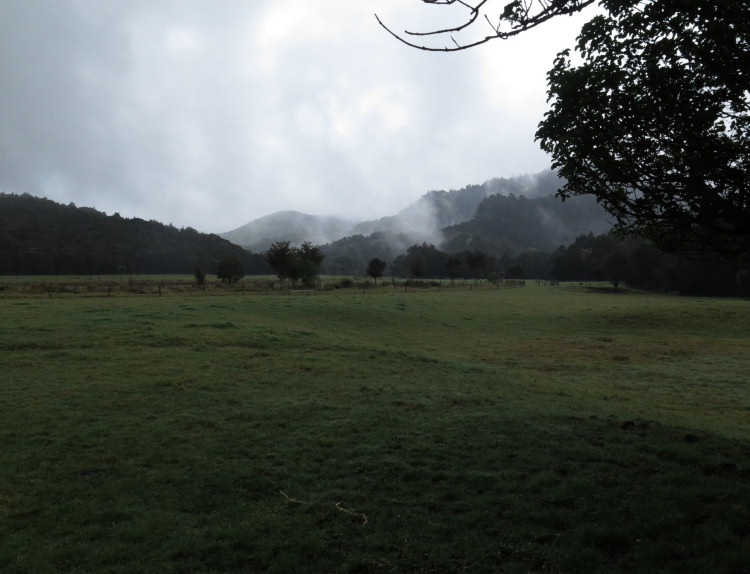 We had a weirdly foggy morning, suddenly clearing just before eleven, when I took this picture.

I went out to Mangonui to the Chiropractor again and on the way I visited another of my in-her-80s acquaintances, a woman I've known all my life, from Yacht Club at Taipa when I was very young and with whom I spent a lovely couple of hours in conversation before I went on to my appointment.  She and her husband were dairy farmers just around the point from Taipa Beach, where they lived on one of those idyllic properties with private beach access, the sort of place other people must have regularly occupied before the British settlers came here with their unfamiliar approach to land ownership.  I love sitting and looking at the sea and beach from her wide windows but the context is never far from my thoughts.  There are so many more beaches like this, in exclusive Pākehā ownership, than there are places Pākehā think they can't go because it's Māori land! 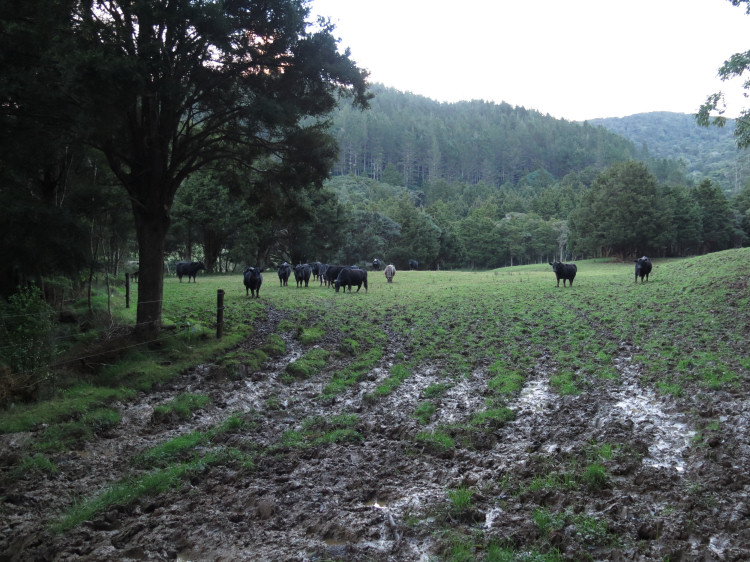 Home again and the cows came out of the Back Barn and into the Blackberry, for a short stint before I will move them on across the stream in the morning.

I have a hope that photos like this one will become "before" references when places like this become vastly improved.  This muddy area needs a culvert to take the water coming from beyond the boundary, down to the stream.  To the right are the tall gum trees on the forestry block, so this part gets very little sunshine and doesn't dry out until well into the summer.