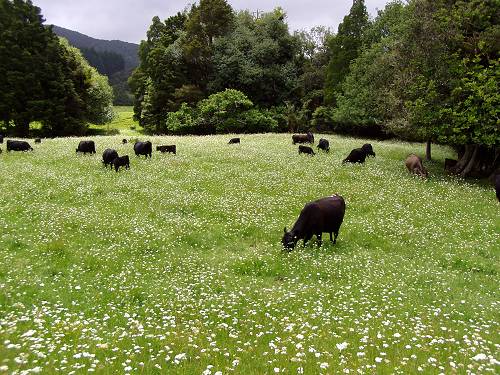 We shifted these cattle along the road yesterday because the paddock seriously needed grazing!  I'd been trying to get hold of the neighbours for days to see if they'd like to shift their heifers before I put the bull next to them (I really hoped they would, so that he'd have no outside distractions) but perhaps they're on holiday somewhere else.  We took the precaution of running an electric tape along the fenceline, so that the bull wouldn't give any consideration to going over the fence.

The paddock the insemination mob were in the other day, which had a similar white-flowered appearance, is through the gap in the trees, over the river, which runs around the edge of this paddock, under all the big trees. 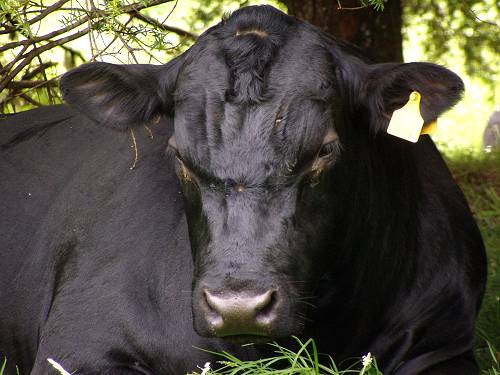 Now isn't that just the friendliest face you've seen this year?  Arran 20, taking a short rest from his duties out in the field.  He's a very polite animal, so far, although I tend not to have too many face-on discussions with him and if he is interested in a cow, I don't tend to stand around in the way.  But if he's lying down I can still walk closely past him with as little disturbance as I cause the cows, so he's pretty placid.

On the news today: Ultra-violet radiation levels in this country are 40% higher than in countries at equivalent latitudes and altitudes in the northern hemisphere!  How reassuring.  Just when I was about to go out and do some work!

Every week or two there'll be some new piece of news about Melanoma and the climbing rate of detection in this country.  It is always reported with great alarm, as if it wasn't entirely predictable, now we know how dangerous the sun is and generations of us spent our summers lying around in the sun, before we knew, just soaking it up, burning great tans into our skins, which are now showing up as interesting freckles and moles which may kill us.  The more worrying thing is that the multi-media sun-care messages here are not well designed and they're not getting through to teens and young people now who, despite wide knowledge of the danger, continue to bake themselves without any concern for the future.  I shall probably spend the summer showing off the crater in my leg to any sun-soaking teenager as a horrible warning of things to come, should they not change their ways!

This is the whole insemination mob, all of which just happened to gather together in front of our house this morning. 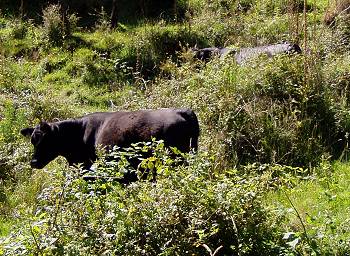 Bull #26 has his mob of twenty cows and their calves over the road on the hill now, after an urgent shift on Tuesday, when one of the neighbour's heifers came on heat and looked like she'd like to sail over the fence to join the bull!  Today #423 was coming on heat.  I watched for a while as they played this rather entertaining game of "round and round the blackberry bush".  The cow wasn't quite ready for the bull's intentions, but he was extremely keen that she be so immediately, so she just kept avoiding him.  I've seen cows use trees in the same sort of way, standing in inaccessible places under fallen branches, so the bull just can't get to them!  They're really very clever!