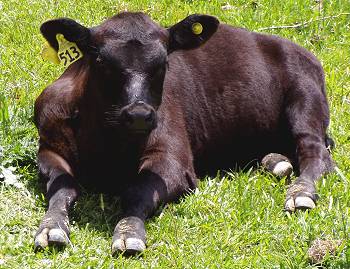 I can imagine what many of you might have been doing at one o'clock this afternoon, but I was out checking cows!

I'm still trying to catch young #26 doing his business with the cows to ensure all is going as it should.  I have no particular concern about him, but like to periodically ensure that the bulls are properly in operation - too late when it comes to the end of mating and half the cows aren't pregnant!  So far I've only seen him in the first stages of any of the cows' heats - when they're not yet standing, but he's pretty keen for them to be!

This calf is the daughter of 416, the first of the two breech calves this year.  Cattle don't often sit like this, with front legs outstretched.

At 5pm I was in the yards replacing heat indicators on the insemination cows, then at about 8pm I was there again, inseminating Ranu!  We made up a little song, Stephan and I, as we walked Ranu in, just replacing a few of the words to a familiar tune:

Yes, Stephan went Ragwort spraying this morning, it being the first fine, still morning for several days and so we take our opportunities whenever they present! 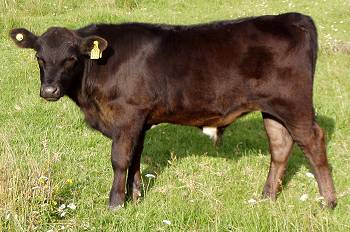 Morning and night I'm still feeding the orphan calf his two litres of milk.  The calf's growth-rate had dropped back significantly at last weighing, but he's not looking too bad for an abandoned baby - still has a reasonable amount of flesh on his bones and bounces around the paddocks with the others.  He succeeded in getting some milk from Quilla 14 the other day and she seemed not to mind at all, but since then I've only seen him suckling on the (dry) heifers, which won't do him much good at all.
I'll have to start cutting back one feed pretty soon, before we get too close to the bottom of the bag of powder!  I don't want to suddenly cut him off from his milk feeds when the powder runs out. 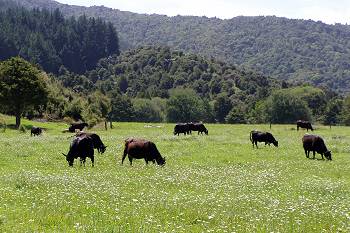 It's been very windy lately which, bearing in mind the heat, has been a moderately good thing.  It's a bit tiresome though, so the rest of the cows in this paddock were sitting down a slope under some trees, out of the blustery breeze.

The grass is bristling out of the ground at a wonderful rate, but so is the Queen Anne Lace (also known as Carrot Weed and, apparently, Waikato Dandruff!), the flower stalks of which will harden off quite quickly so the cattle don't eat them as readily and the paddock remains unhelpfully stalky.  The trick is to get it grazed down early and well, so that the flowers are mostly eaten off.  The calves really like the flowers, delicately picking them off as they wander around. 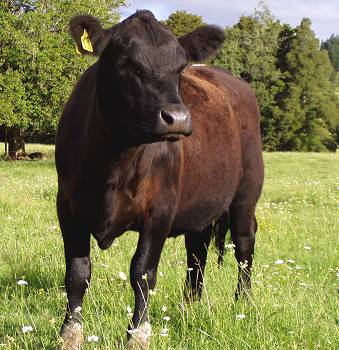 Imagen 33, Ivy's surviving twin calf from last year.  I have found a specifically-Angus discussion forum on the internet (based in USA) on which the participants have made some fairly favourable comments about Imagen's sire, N Bar Emulation EXT.  When I first discovered him in the semen catalogues and asked an experienced Angus breeder what he thought about him, I was told he had dreadful temperament and oughtn't to be used, so I stayed away from him.  But when he turned up at the top of my list when calculating mid-parent EBVs three years ago, I decided to try him out and I'm glad I did - so far so good!

I'm actually taking quite a punt on him this year, since both the bulls with the rest of the cows are his sons.  I would doubtless be advised by experienced farmers to buy someone else's bulls to use with my cows, but that wouldn't be nearly as much fun!  I like seeing which genetics work here in the stud-born calves, then infusing them into the wider herd. 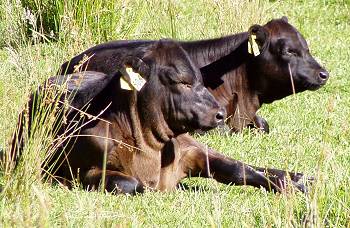 I spotted these two this afternoon when checking on the cows, snoozing in the sunshine, tucked in amongst the rushes, out of the wind.  They are 506 and 513 (she's at the top of the page as well).  506 is my favourite calf this year, so far.  Her mother is 418, the original Backward Baby who's been a favourite for a while, due to her growth pattern, conformation, temperament and she's just carried on showing her worth with this, her first calf!  Admittedly it's not the most flattering photograph, with all that double chin and all.  I'll have to do some calf photography over the next few weeks!

I shall squeeze the last day of the year onto this page - I feel like being tidy.

Time for reflection perhaps, except that this is a year I shall be glad not to think about too much again!  Still, the cattle are beautiful, the weather is being warm and fabulous, we have money for fertilizer and wine and we're still able to walk, see, hear and enjoy it all!  I'm pretty content.