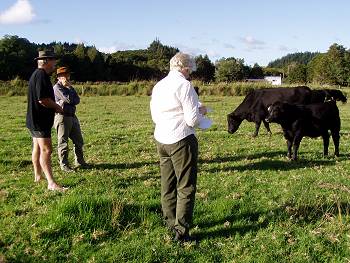 For quite some time now, I'm not sure exactly how long, Sue Clarke and I have been corresponding about cattle.  Sue and Trevor breed Murray Grey cattle near Levin, about an hour north of Wellington, at the southern end of the North Island.  Sue and I met up at a couple of the National Beef Expo weeks we went to, twice at the National Fieldays and last year we visited them on our way north from Jonathan and Char-Lien's wedding in Wellington.  It was a real treat to see their cattle on that visit and today we were able to host them on a visit to our part of the country! 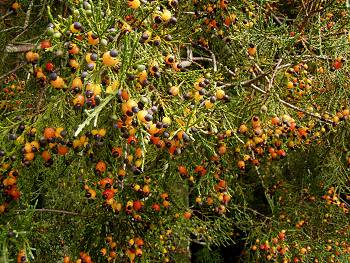 The three of us spent a lot of time looking at cattle during the morning, dodging the occasional showers which would have made us rather uncomfortable if our timing hadn't been just right - we were passing the house every time it began to rain, so could duck inside for a cuppa until it cleared again.

After looking at the cows, we continued walking, out toward the back of the farm on both sides, taking tracks I've posted on here which Sue has seen only in photos and was interested in walking for real.

The Kahikatea trees are vibrantly festooned with berries, causing the trees to stand out amongst their peers in the green. 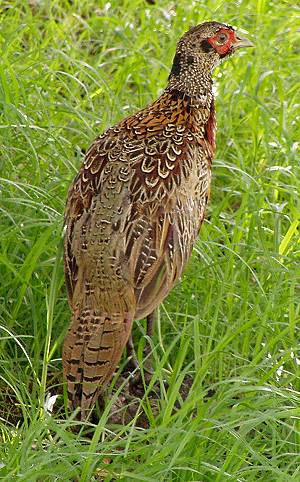 Sue and Trevor left us again early this morning.

I let the pheasants out of their cage on Saturday for the first time and one instantly flew up into a tree, another across the river, then they just quietly picked their way around the chickens' paddock.  I went back in the afternoon and couldn't see a single one of them.

This morning two of the cock birds wandered quietly past the back of the house. 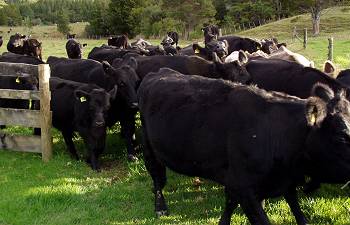 This is a lot of cattle in a hurry to get out of one paddock and into some new grass! 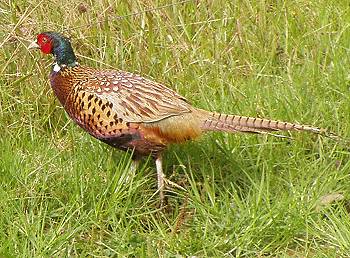 When I saw the young pheasant cocks this morning, they were being followed by this fine fellow, an adult male.  He wasn't making any aggressive move toward them, merely following along several metres behind them down the track. 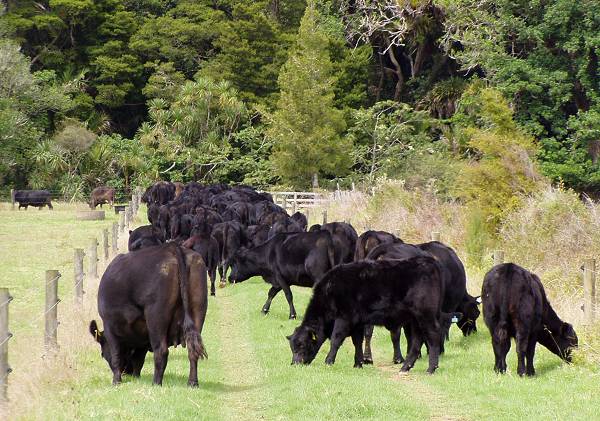 I've taken quite a few photos of cattle walking down this particular lane over the years, mostly because in every year the mob is a bit blacker than it was before, and it has interested me to keep a record of the gradual change.  There are some brown cows visible at the head of the mob, the two greys and Fuzzy 357, and the silver heifer is tucked away in the middle somewhere, not visible in this shot.  That impressive back-end on the left belongs to Irene 698 and the calf at the far right is Ida 56. 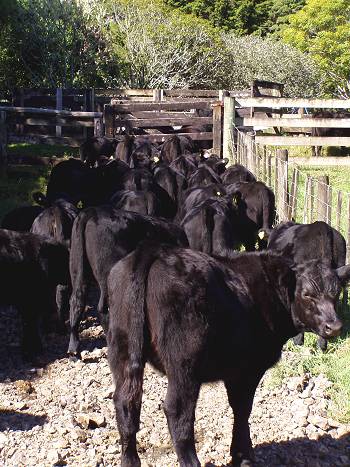 I had brought the cattle to the yards to give them all a copper injection.  The cows all got their usual 2mls and the calves, because there are still a few young, small ones, got 1.5mls.  We drafted the cows away from the calves and did them separately, so none of the calves would get squashed in the race during the process.

This photo was taken towards the end of the process and there's Ida 56 again, still at the back!

When I'd finished the coppering, I let the cows and calves wander slowly back across the flats to a new paddock.  They're due to go over the road, but I don't like to make them do anything too strenuous straight after a copper injection, since there is the faint chance of inducing a toxic reaction in excited or over-exerted cattle.

In the photo, the two calves are wandering along the lane along the side of the House paddock, then they'll turn left and walk along the tops of the Flats 1, 2 and 3, before turning into the Flat 3 gate, where you can see the cows are dispersing across that paddock. 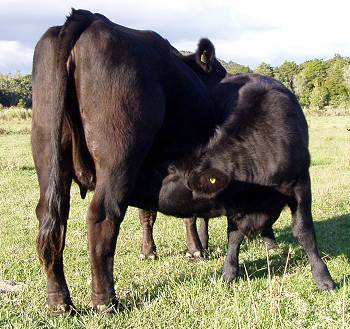 This is 418, favourite cow, with her second calf, heifer 546.  The calves grow so fast, from those often-tiny, spindly little babies, into these great bulky, healthy calves.

I took this calf off the "keep" list when I first compiled my selling list, but only because her elder sister is one of the two pregnant commercial yearlings, but as this is probably the better of the two animals, I suspect I'll end up keeping her too. 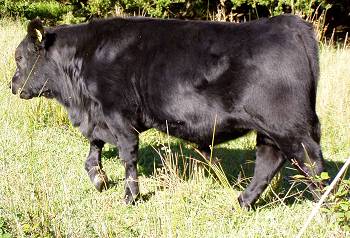 Alex 51, Isla's son, in all his hairy splendour.  He's a nice calf, although I'm not particularly keen on the way some of his sire's (#26) calves' tails are set into their spines. 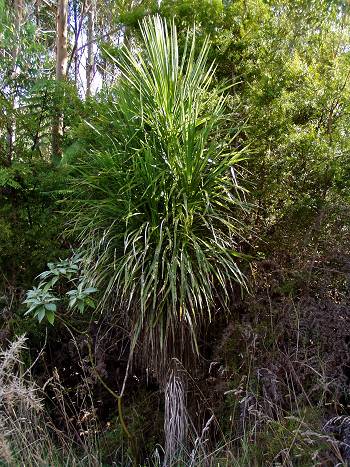 Back at the beginning of 2004, when steer 356 got stuck, I wickedly broke the top out of this Cabbage Tree (to offer as tempting feed to the steer in the emergency) and since then I've been watching with interest, to see how it responded.  It now has five or six shoots growing vigorously from that point and I shall continue to watch how they develop over the next few years - as the plant grows, the leaves will die away from the bottom, leaving the trunk and branches exposed, so we will see more easily, how the separate branches grew. 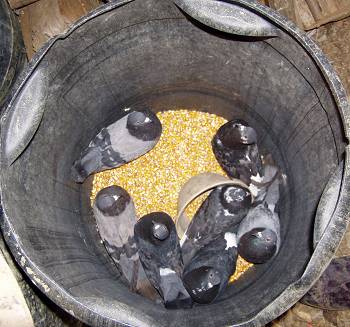 The other day I came up to feed the pheasants in their then-newly-moved cage and discovered nine pigeons in the maize bin.  They had dropped in through a crack where the lid wasn't on properly, but once in the darkened interior, appeared to have settled down for a bit of a sleep, so that when I opened it up, they just blinked up at me!  I caught them all and put them in their purpose-built loft for a few days, but here most of them are again.

These pigeons have no earthly use except they amuse us.  We didn't actually plan to have as many as 14 around, but the sneaky things raised the last two babies underneath the chicken house, where we didn't see them until they were almost flying.  If there are any more such unapproved family expansions, we may have to find some recipes!