We drove out on our lovely new "road" today so I could go for a very short walk around the cows. In this picture, they're watching Stephan walking an escaped heifer back to the gateway. We found her grazing in the lane, probably because some of the electric fences aren't working quite as they should so she'll have pushed through somewhere. 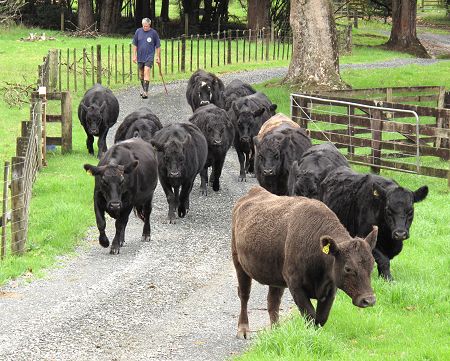 My 14 beautiful heifers, on their way past the yards so we could put them over the road onto the hill. 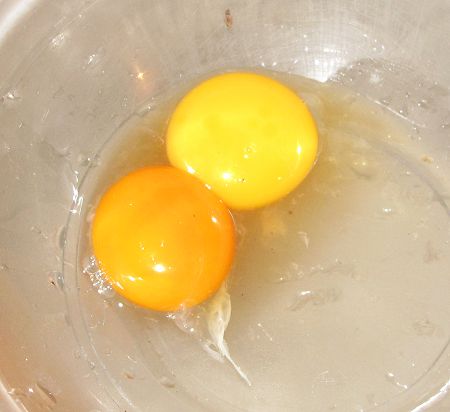 The egg on the right came from a box which states the hens are free range birds. The egg on the left is from one of our hens, which lives in a cage down amongst the trees which is moved every day so the hens can eat grass and whatever else they might find living under it.

In case there's any confusion, in my view the darker yolk looks a lot nicer than the lighter one.

Landcorp Takakuri, near Kaeo, south of Mangonui, opened its gates today to local farmers. Landcorp is a state owned enterprise, holding farming interests around the country, generally in fairly challenging terrain. It only occasionally holds public field days, so I was determined to attend the day if I possibly could and am very glad I did.

Landcorp is running a three year programme to improve the profitability of its beef cow herds. A breeding herd's productivity depends primarily on each cow producing a calf every year. The New Zealand beef herd average calving percentage is around 90% - the number of live calves raised divided by the number of pregnant cows wintered. That means that for every 100 cows tested as pregnant in autumn, ten of those cows' calves don't survive to weaning. Landcorp have decided to address the various issues which affect that number, which will raise the profitability of their cow herds.

Calf losses occur during gestation because of diseases like BVD, Neospora and Leptospirosis, as well as a small percentage as a result of genetic or other mishaps; calving difficulty may lead to death of calves at calving, or soon afterwards; calves which don't get a good start in life may succumb to infections early on, and some will die from accidental causes.

Cutting down the losses from things which can be influenced can make a big difference to the numbers. For instance, doing something to control losses from Neospora (which might involve some careful culling of families which abort regularly because of it) and making sure dogs are not continuing its spread in the cow herd, could make a significant difference in some herds (there is currently no vaccine available to control Neospora). Testing and vaccinating for BVD where there's a problem in a herd would make a huge difference in many cases, including ensuring all bulls brought in for breeding are tested clear of the disease. Where Leptospirosis is not being controlled, there could also be gains made - and not just for the cattle, but in terms of human health risk as well. (Cattle can be vaccinated against Lepto; there is no human vaccine, but vaccinating cattle significantly reduces the risk of infection to people who work with them.)

When selecting breeding bulls, ensuring one stays away from breeders who sell animals which are carriers of lethal genetic defects is an obvious choice! Enough can go wrong without knowingly adding those sorts of risks.

The other prime area of influence is in the choice of sires with regard to the likely birthweights of their progeny, along with careful management of first-calf heifers. 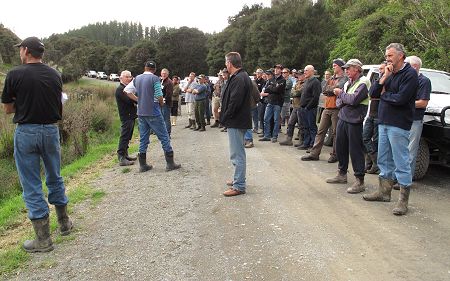 After the morning's presentations, we went on a farm tour. Daniel, the farm manager, had a transmitter in his ute and the rest of us tuned into his FM frequency to receive a commentary as we followed him around the property. What an excellent system!

We stopped first to look at the pregnant heifers. There was discussion about the grazing planning for the animals, including surprise expressed by many about a 100 day grazing rotation, achieved by the use of temporary electric fencing. 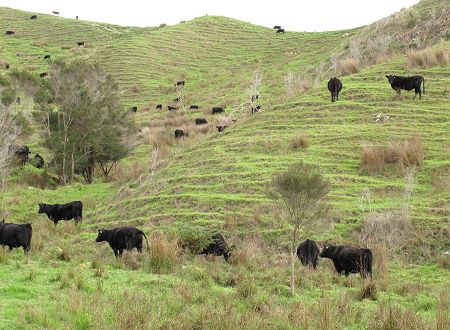 With an expected growth rate of around 10kg/ha of dry matter per day during the winter, that would increase the grass cover by 1000kg (about four to five centimetres of growth) between each grazing round. Feed budgeting and planning is surprisingly uncommon amongst farmers, it would seem.

Despite some difficulties with water provision, these cattle were being "back fenced" as well, i.e. once they'd grazed an area, they were kept off it, rather than being allowed to continue to wander around an increasingly large paddock area as the electric tapes were removed. That means that in a paddock with four breaks which take two days each to graze, by the time the cattle leave the paddock the first part has already had six days of recovery. 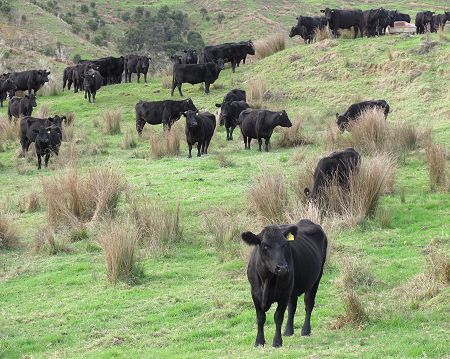 The cows have obviously suffered through the drought. To attempt to prevent further loss of condition, they're being fed Palm Kernel Expeller (PKE), that supplement widely used now in the dairy industry. At the top right of this picture some of the cows are eating PKE from a trailer parked beside the track.

There didn't seem to be any particular concern expressed about the environmental sustainability of the use of this product, in terms of where it may have been grown. People seem to see it as a good use of a by-product, but cannot see that their contribution to the profitability of the companies which may be producing Palm oil in environmentally awful ways, encourages them. Pay them for their waste products and you increase their overall profit and their pressure on environments they ought not to be allowed into. 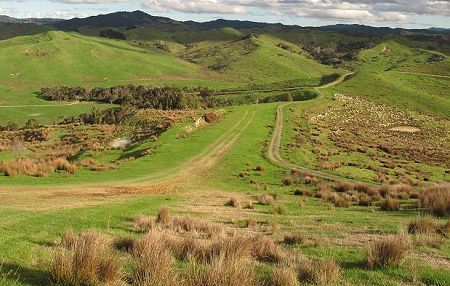 A view from the top of the airstrip.

The muddy bit halfway down is where the plane made a mess during repeated landings after the rain started.

To the right of the road are a mob of Romney sheep, and out of the picture to the right is where were had previously stopped to look at the cows. On leaving, we headed left and back to the shed where we'd begun, for concluding speeches and a barbecue and drinks to end the day. 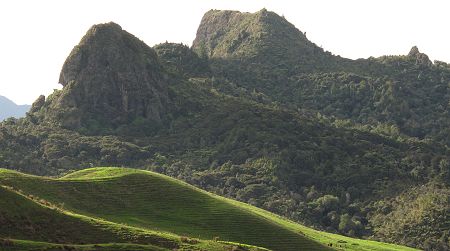 This is a view of Taratara I've not seen before, from the airstrip. Because we lived at Coopers Beach when I was a child, any trip south meant passing Taratara, so its faces are familiar friends. My brother Bruce apparently climbed it once. 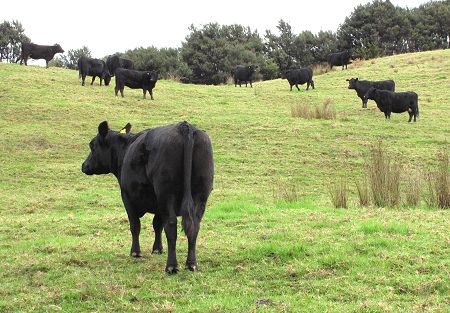 Back to our not-so-thin cows. There are a couple of light animals, but they're of those families which I'll one day get rid of because of their inability to maintain a healthy body condition. Some of them are actually fat.

Any mammal needs a bit of energy in reserve in case of some sort of health or resource challenge.

One of the best things about being "out there" on the internet is that we get to meet some of the people who choose to make contact with us and in every case so far those experiences have been delightful. Tonight we dined with another couple of new internet-found friends, who have recently moved into the area. We didn't have time for a farm walk this evening, so they're coming back again in the morning for a wander around the farm.