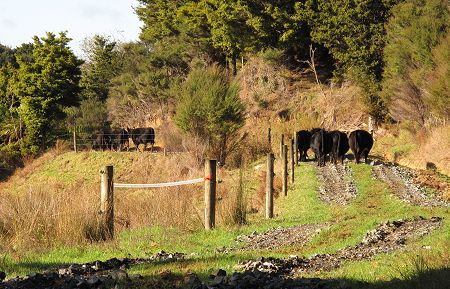 Our metal track is less well formed toward the back of the farm, but will still make an enormous difference to our ability to get around easily during the winter. Out here, where there was previously no base metal laid, we had 100mm rock spread and it has, like the smaller grade metal, packed down very nicely for both the bike and the cows. 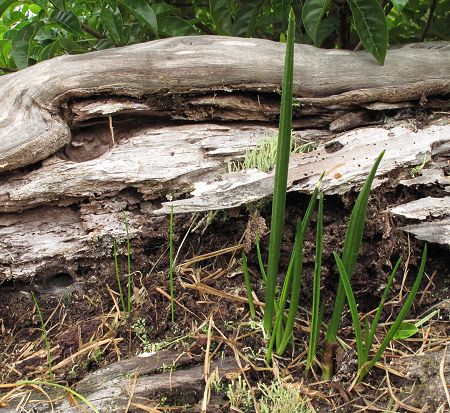 The sun orchid is growing again. Year by year the colony of plants is expanding.

I initially thought the littler green leaves to the left were new plants, but later realised they're probably the onion orchid which grew next to the larger orchid in the first year.

The Puriri leaves behind the wood in which the orchids are growing, are those of a sapling I planted there some time ago. I think we're going to have to remove it for the sake of the orchids. Cutting down Puriri is not something I take lightly, but as we've grown many of them including this one, and as there is only one colony of orchids which can't be moved, it's the Puriri which will have to go. It's growing close enough to throw shade over the orchids for much of the day, and since the flowers will only open in warm sunshine, shade is not wanted. 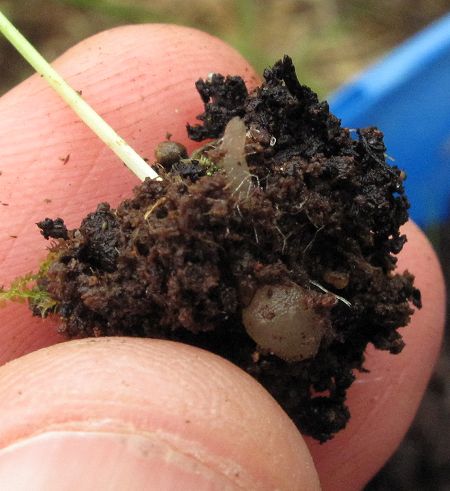 The undercarriage of a tiny orchid plant. It seems prudent to attempt to move a few of the orchids, just in case something terrible should happen to their main growing site. I don't know whether or not I'll have any success, because they need enough of their associated mycorrhizal fungi to thrive, and moving them may cause the loss of too much of the soil and fungi. I did not attempt this in previous years when there were fewer plants.

Looking at the photo as I write this, I suspect this is actually another of the Onion Orchid plants, not the Sun Orchid. Time will tell. 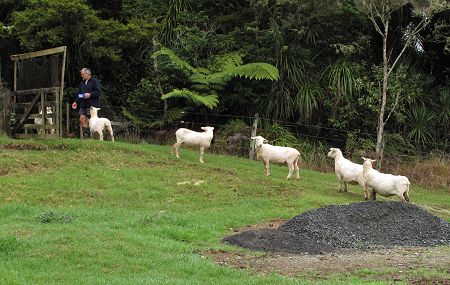 The ram has become worryingly thin, and isn't looking very well. We acquired some drench and gave it to him, hoping that will solve his problem. The primary indicator of greater well-being, will be the lifting of his ears, which are currently very low - he's third from the right in the picture. 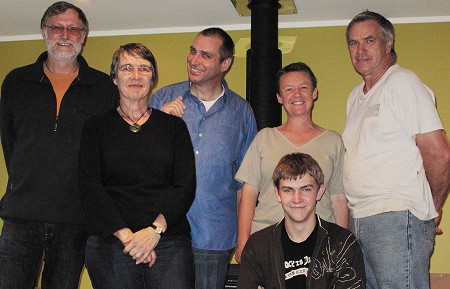 Around noon it started to rain, just before Elizabeth and William came to visit, bringing Stephan's brother, Andrew, who is in the country on his first return home for several years.

Most of us went for a walk out on the new road, some in townie shoes which stayed mostly clean on our marvellous metalled tracks!

There was heavy rain during the night, mostly in the two hours from 11.40pm. I lay listening to it for ages, wondering how much it would cause the river to flood. The gauge read 68mm this morning. 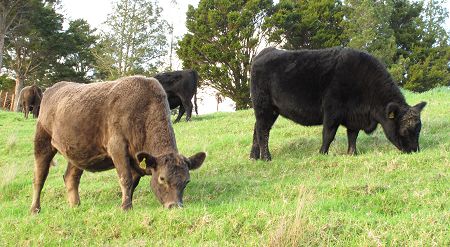 The pregnant heifers are all in lovely condition on the hill.

I moved the cows this evening at dusk and they were so frisky I had to get out of the paddock! Sometimes they can be quite frightening in their bouncy excitement. Grey 443 kept dashing right up to me and putting her nose down and kicking her back legs up, which propelled her toward me in an alarming way.

Another week, another field day, this time a visit to Balance Farm Environment Awards winners, Brian and Gaye Simms in Snelgar Road, not very far away from us.

Brother Andrew was at a loose end and so he came with us. I'd promised Stephan I'd take him out for lunch on his Birthday, and this was it.

For those who have expressed disbelief over my photos of extraordinarily vibrant grass colours, here's a comparison between ordinary rye pasture (on the left) and Kikuyu.

This is one of Brian Simms' boundaries, and he hates Kikuyu and will not have it in his pastures, so has determinedly kept it off his property throughout his farming career. He acknowledged that through the summer's drought, the neighbour with the Kikuyu appeared to be doing a great deal better than he, in regard to feed levels for the cattle! There seems to be an increasing shift in attitude in those farmers who have been very anti-kikuyu over the last couple of decades, but are beginning to see the pointlessness of continually fighting it, and its usefulness during hot dry periods when every other grass dies. My experience on our place is that it is the Kikuyu which kept the plants we rely on throughout the rest of the year alive - the rye I'd previously sown was not killed by the heat where it had the Kikuyu cover, and the clover, which is susceptible to heat damage, was similarly protected.

Tonight Andrew took Stephan and I out to dinner at the Beachcomber and we had a lovely evening. 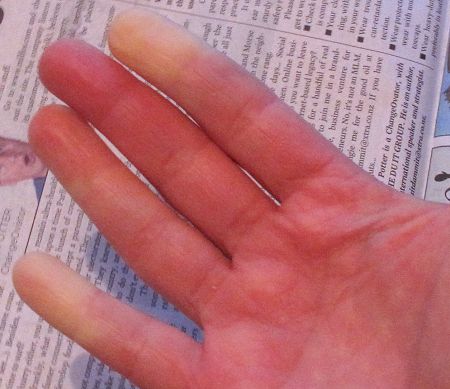 Winter must be approaching! Do your hands do this extraordinary thing? My mother used to say her fingers had gone dead and it seems to be happening to me now too. It's not bitterly cold outside, but suddenly there's no circulation or sensation in the ends of some of my fingers and it takes several minutes of warming before they return to normal.

I spent the day writing an article on Bovine TB. The writing job has provided many opportunities for contact with some very interesting people, as I research my topics.