I identified our probable next homekill beef animal this morning when Demelza's daughter #93 went under a spring gate as the others went through the open gateway beside it, then refused to go back where I wanted her. I parked the bike across an opening while I brought her out another gateway and she went to some trouble to go around the bike and through the gap into another paddock. I swore at her and my own stupidity in not shutting the gate! I eventually got her back to the others, but her name might as well now be Steak! 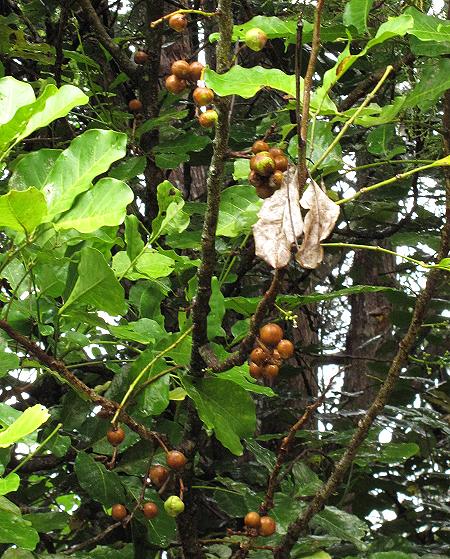 These are Kohekohe fruit, the following step in the process for the Kohekohe flowers I pictured two weeks ago. These are fruits from flowers which bloomed last year - you may be able to see a small sprig of current flowers below the dead leaves and just above the bottom right group of fruits in the photo. 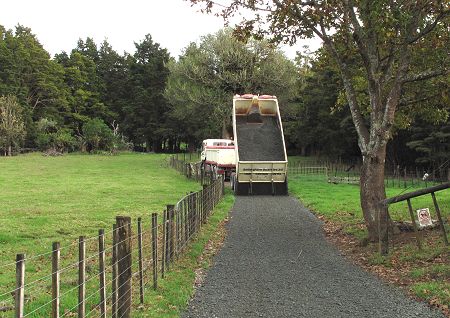 This morning we started having metal spread on the tracks, beginning with the driveway in from the road. I knew, from the delivery of the fence posts last year, that we could get a truck and trailer unit turned around in here, so the first load came that way.

Rex spread the trailer's load first, and when that ran out he lifted the tray on the truck. The best thing about dealing with Bellingham's was that they sent us their best driver for this sort of work, and we had him for the whole job - unlike last year's river metalling by another company, when we had to deal with about five different drivers. 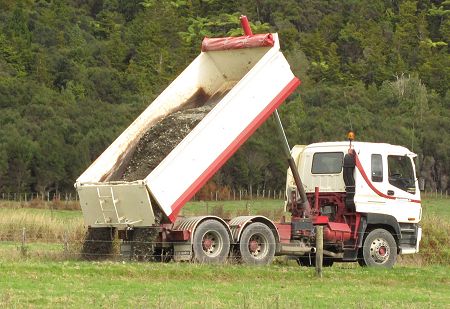 When we'd had another truckload for the driveway using AP (All Passing) or Gap 40 (bits of rock which will pass through a 40mm screen or sieve), we spent the rest of the day having 65mm rock spread on the farm tracks. There are weight limits on the trucks, so the loads were never as large as the capacity of the bin.

We don't need a blanket spread of metal across the width of the tracks, so Rex put a steel drum in the centre of the tail-gate before loading up each time, which caused the metal to come out and spread only up the wheel tracks. That means the metal goes much further for each load (about 75m per truckload) and may leave the cattle an easier walking track in the middle. 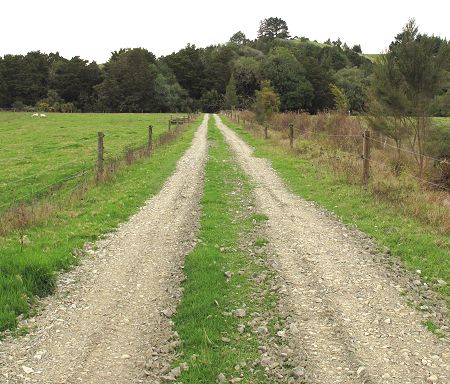 Looking back down the House Paddock lane. About three years ago Stephan borrowed a truck and spread several loads of rotten rock on this track, which provided an excellent base, but it needed capping with more metal this year. It's lovely to ride on!

It's a vast improvement on how it used to be!

With nine loads of AP65 we nearly reached the top of the flats.

Tomorrow we'll carry on towards the back of the farm. This is the view down toward the first river crossing from the gateway near the top end of the Windmill Paddock, showing the river metal we spread last year. It created a tricky surface for driving, with its large boulders, but it was at least a hard surface through the winter.

Here's a picture of it's former state in the winter, from the other direction.

At the end of the day as I rode out in the truck with Rex to see how far the last load would take him, I asked where the metal was coming from. I'd been thinking all day that he was going to the Larmer Road quarry - and a conversation with Kevin at Bellingham's had included a reference to Rex driving past the office, but at some point it occurred to me that something wasn't quite right about that detail, because I'd arranged to have lime-rock brought and that would come from the Fairburn quarry.

When you think that something is one way, you tend to see things which support that belief, and the mind sometimes ignores the things which do not. As the metal poured off the truck all day long, it dried to a fairly light shade, and it being a year since I'd seen lime rock in a wet state, I didn't think much about it not being a lighter grey in colour.

My conversation with Rex led me to the realisation that we had just finished laying about 750m of blue stone and that was not what I'd ordered! I had a quick conversation with somebody from Bellingham's who said that of course Lime rock and blue stone are completely different colours! But I do not deal with rock on a daily basis, so the difference in colour between one rock and another is not really going to jump out at me. When Stephan came home from trapping I asked how he liked the lime rock, just to see if he'd have picked up the difference, being a bloke and all and you know how much more clever they are about such things. He said he thought it was excellent.

I bet if I sold Mr Bellingham an Angus-Friesian steer and told him it was Angus, he'd not notice, despite the marked difference in shape from a straight Angus animal!

Today's programme took some careful organisation! I wasn't sure what time Rex would arrive with the first truckload of metal, but I needed to get most of the cattle in for the second lot of pregnancy testing with the vet. As it turned out, everything worked perfectly, with Rex going out the gate in time for us to bring three mobs of cattle in to the yards before he came back with his second load, and with just enough time for me to draft the mobs before vet Nathan arrived. 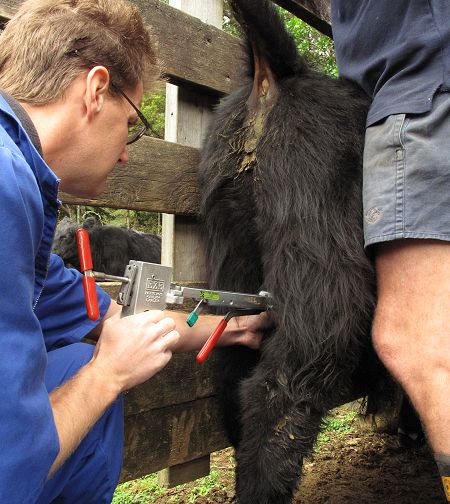 One of the mobs we brought in consisted of only Imagen and Isla's son #92. I decided to have him castrated, preventing him growing into a large bull. I had three reasons in mind: he has not grown very well since Isla died; because of being bottle-fed and being of a very quiet nature anyway, he regularly presents himself for a chin scratch and I don't want to have to deal with that when he's a testosterone-loaded 800kg monster; a couple of his brothers have not performed as well as they were expected to. At the field day last Friday I had a conversation with someone who had bought one of Isla's earlier sons, who reported that neither he, nor his progeny were as good as they'd hoped. Another son was somewhat lacking in willingness to breed. These things are obviously not exclusively Isla's fault, and we have some very nice grand-daughters from her son Arran 20, but it was enough to add to my other two reasons, to make the decision about #92.

Because he's now over six months old, Nathan gave #92 a local anaesthetic before using the big castrator tool to put a thick rubber band around the top of his scrotum. Afterwards #92 went back to his grassy pen and immediately started grazing, appearing hardly bothered at all.

The pregnancy testing results were much as I expected, except that one of the yearling heifers in which I had noticed some distinct behaviours which had led me to believe she probably wasn't pregnant, is. I didn't get Eva 81 tested, because I've seen her definitely on heat a couple of times. Demelza isn't pregnant, but I'm not sending her to the works because I don't want to, don't have to. #478, only daughter of Crispin, is not pregnant and because her last calf was so wild, I'll send her to the works at some time in the next few weeks.

Nathan and I took the opportunity to have our obligatory annual Prescription Animal Remedy (PAR) consultation, during which the vet and farmer discuss the likely medicinal needs for the coming year, which allows the vets to prescribe for animals in a known herd, without always having to visit a sick animal on every occasion. In our case it covers drugs like mastitis medicine for Imagen when we dry her off, the copper supplement I inject in the cattle several times during the year, some Baycox for coccidiosis if we need it and so on.

After Nathan left we had a break for a cuppa, and I went back to the yards and gave a copper injection to all the cows and heifers, before drafting them into their winter management mobs. There are 26 cows (including the four first-time-pregnant R3 heifers), 14 pregnant heifers (11 yearlings and the three R3 second calvers), and the young mob of seven R1 heifers and Eva and Bella. It's good to have them all organised. Imagen and #92 can now be a mob on their own, so Imagen can continue to have good amounts of pasture while we're still milking her. The other little bulls were eating her grass too quickly, so they can go off on their own now. 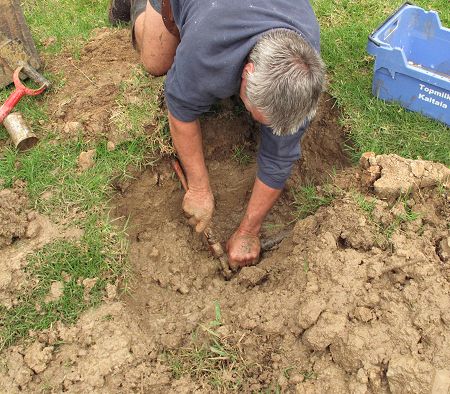 Stephan left me drafting cattle and went out to fix the water leak in the middle of the track which was due to have metal spread during the rest of the day.

It appears that the shrinking of the ground during the drought may have pulled the pipes apart enough to cause the joint here to leak, so the fix was a simple matter of tightening everything up again to stop the water leaking out. 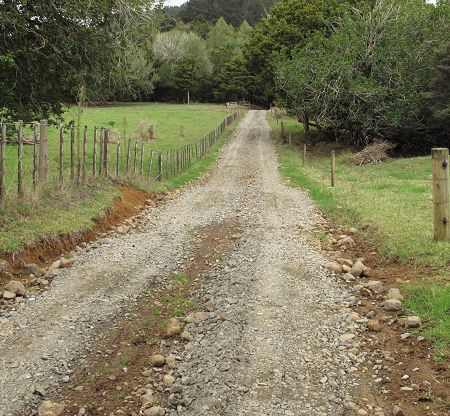 The track shown above now has a smooth, rideable layer of metal over all those horrid, lumpy rocks. I've had so many near and actual falls off the bike in the last year, when my wheels have rolled over the river rock. This will make an enormous difference to our lives! 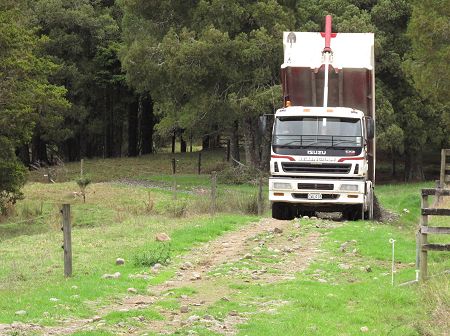 The truck, having come over the stream, spreading along the bottom of the Pines Paddock, before the track rounds the corner to the leaky water pipe area. 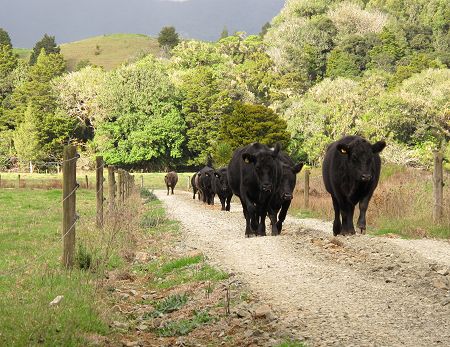 I watched the heifers with interest, as I brought them from the yards to their paddock. Lime Rock had been my preference for the tracks because it's the easiest surface for cattle to walk on, and I was concerned they'd find this rock uncomfortable. But I suspect we've expected our cattle to put up with such horrid surfaces for so long on the tracks, that this stuff didn't phase them at all. 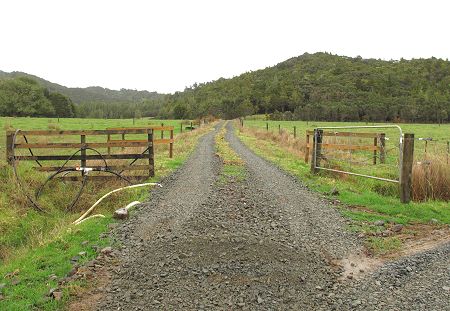 Unfortunately the rain caught us out this morning and we had to abandon our attempts to get right out to the Back Barn paddock. The last few loads went along the lane to the Flats 2, 3, 4 and 5 paddocks, making that lumpy track easily driveable. Then we had to call it quits for the time being. I don't know whether we'll have a chance to get more metal on this season; it all depends on whether or not this is just a bit of rain, or the beginning of the long wet season.

Many people complain that the NZ public health system is unsatisfactory. Perhaps their expectations are much higher than mine, perhaps I and those I know have been very lucky, or maybe it's just pretty good. Today I sampled it again, for a bit of "routine" exploratory surgery. I've had to wait a little while, but not especially long, and I was able to go in to the Kaitaia Hospital, rather than having to travel for two hours to Whangarei, which I thought might be necessary.

Everyone, staff and other patients, was extremely pleasant and good humoured and apart from the anxiety of submitting myself to the ministrations of people with sharp instruments and the strangeness of general anaesthetic, it was a very satisfactory day.

Home to my couch this afternoon, and there I stayed.