I don't tend to take many pictures when the weather is damp and grey. We started May with a 17°C (63°F) maximum temperature and I spent most of the day inside, writing. 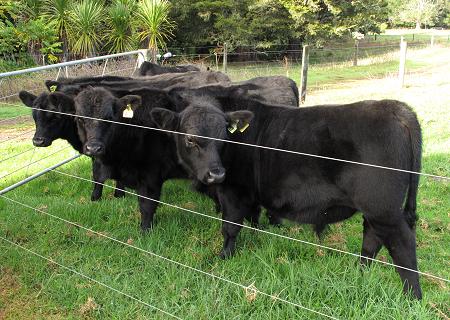 Five little bulls in the House Paddock. Stephan was on the other side of the gate milking Imagen and the bulls had all come galloping across the paddock, as they normally don't.

My favourite is the front one; Stephan calls him Joe 90, real name Virago Reality 90 AB.

We took the bulls to the yards later and put button secondary tags in their right ears, before they get too big to handle easily.

Stephan spent much of the day making cheese and I sat writing web pages, in that recent spurt of writing activity you may have noticed. 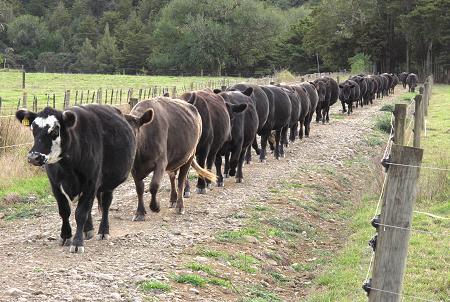 The cows often move in single file, but rarely is it such a photogenic event.

I'll have to cull that untidy one down the back! 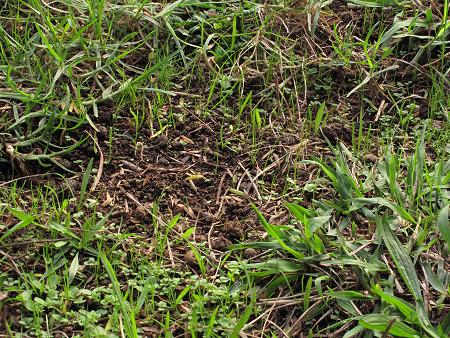 Since the rain and in the ongoing mild air temperatures, there are tiny grass seedlings appearing everywhere one looks. This is just seed from the existing grasses, not seed I've oversown. Having oversown a large area of the flats with Italian rye last year, I won't do any this season, because most of last year's plants will grow again this winter. 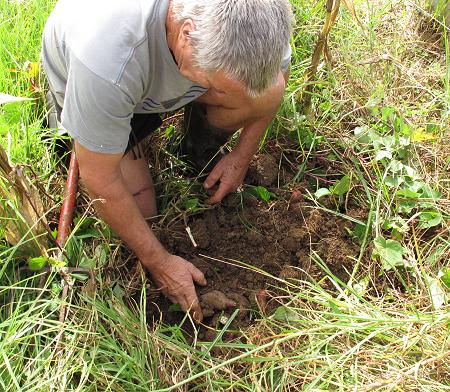 Stephan harvested his small crop of Kumara today. Kumara are a lovely, sweet root vegetable, which I much prefer to potato. Unfortunately some small insect discovered they were very tasty too, and there are holes all through them. I'm sure the chef will sort that out somehow. 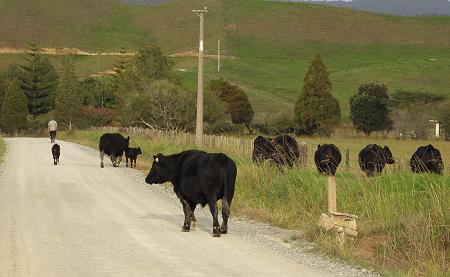 Not our cattle, but we were the ones doing the walking! We helped a neighbour take his cattle along the road to some yards so they could go to a sale tomorrow.

We used to have an arrangement whereby these cattle (which were born in our herd and sold as weaners) could be worked back through our yards, as long as they were not mixed with other cattle in the mean time. But those two little calves are proof of contact with somebody else's bull and while it's hard to say no to someone in such a situation, we decided we had to. A night's standing around in our yards before being picked up by a truck, might conceivably leave us with years of impact from anything from an intestinal parasite our cattle haven't had contact with, to BVD, which would be a disastrous infection for my pregnant cows and my breeding programme. Weighing up the inconvenience to someone for one event against the potential risk to our whole livelihood made the answer clear. 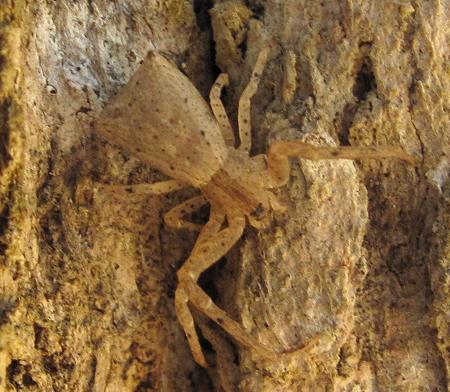 I ought to have guessed the name of this spider, considering the names of my other invertebrate finds in recent years. There was the spider with two spines, named the Two-spined Spider, the weevil with four spines, named the Four-spined Weevil, so I ought not to have been surprised to find that this is a Square-ended Crab spider, genus Sidymella. There are "about twenty species known from New Zealand", I was informed upon making an enquiry to my contact at Landcare Research.

This spider was on the Puriri tree near my max/min thermometer, so I snapped a quick shot of it as I passed. 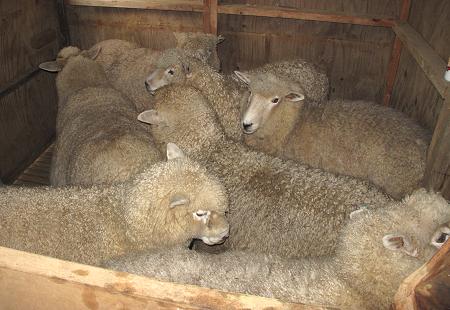 We got the sheep in this afternoon because they needed moving and we had planned to shear them next time we moved them - or move them when they were shorn, whenever they were dry enough. 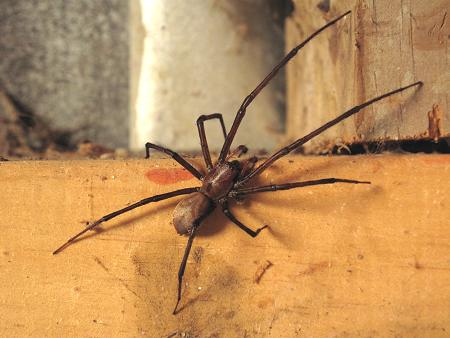 Stephan insisted that I move this large spider from the wall beside the shearing machine, before he commenced work. I wish I'd thought to put a pen or something behind it, to indicate its size. I think it was about four or five inches from front to rear toes. 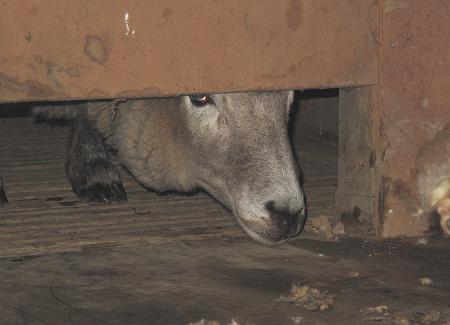 Dotty was the last animal in the collection pen and she didn't like being in there alone, so I went in and kept her company, which made her much calmer while she waited for her turn. 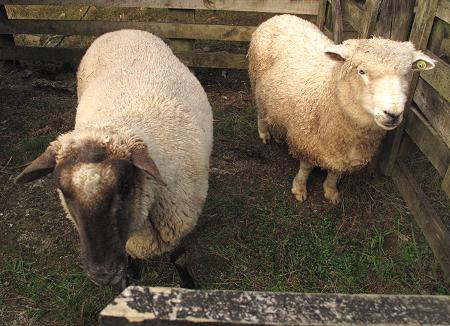 Very sadly the time had come to end the lives of two old friends, Babette and Bendy. Bendy, on the left, was the third triplet born to Minty, and required special care from the start, because his legs were all oddly bent and he couldn't stand. We presumed that he'd been squashed for a long time during gestation, causing the malformation of his limbs. He was soon able to walk, although his feet have remained affected by that early problem and he is prone to discomfort and foot infections. He would have left us years ago had his first teeth not erupted before a tardy agent from the meat company got around to arranging for the lambs to go to the works. By then he had shown a marked disrespect for fences and had done much to diminish my own affection for him.

But Bendy has occupied a special place in the heart of someone who never met him, but about whom I always thought whenever I pondered Bendy's end. Joyce, who lives in North America and has followed this site for several years, has a pet sheep which is about six months older than Bendy, and has taken a keen interest in Bendy's life, and so it was to Joyce that I first sent today's news, when the deed was done.

Babette was about two weeks old when I snatched her from her mother in the paddock, because she was obviously suffering from malnutrition. I left her twin with their mother, who was able to raise the single lamb successfully. Babette's first days are on the Lamb Stories page. She had several lots of lambs, but then succumbed to mastitis in one half of her udder, which prevented it producing milk. (In retrospect, I suspect it was exactly that problem which had caused her mother's inability to feed her own lambs.) In her last year of lambing I arranged for a home for one of the lambs before even putting her to the ram, but when lambing time came, despite some prophylactic anti-mastitis treatment, Babette had no milk at all and both lambs, getting inadequate colostrum, died despite the care of their new human mothers. During the last few months Babette has not been a robustly healthy sheep and I knew we must end her life before she had the chance to lamb again, and better before she had to suffer the discomforts and stresses of the coming winter.

Picking the right time is always a difficult decision. But I think that if the end result will soon be the same, because of health issues in particular, far better to have acted early when the animal is still comfortable, than to have forced it to live through the distress of increasing ill health. Delays in making that decision are usually about our own emotional ties to an animal, or our discomfort with acting according to our responsibilities and sometimes necessary decisions are left far longer than they ought to be, causing unnecessary suffering to the animal. I have personally felt far more troubled by a late decision about ending an animal's life, when suffering has become obvious, than I ever have about early ones, and troubled grief is far more painful than the simple grief of loss. 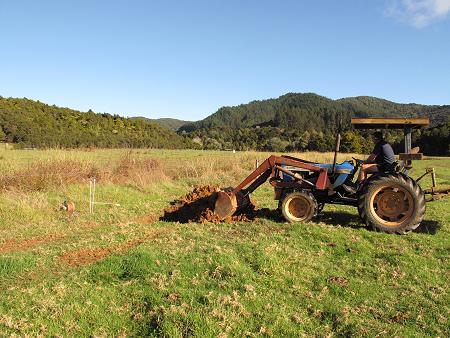 This morning Stephan dug a hole in Flat 1 paddock, where the sheep have often spent their time, and we buried Babette and Bendy.

The tractor might make this appear impersonal and only practical, but all such events are accompanied by thoughtful moments of silence, or things we want to say as we farewell our animal friends for the final time.

I'll plant a couple of trees here when a fence has been erected to protect the area, and it will be part of a subdivision of the paddock.

I am a disorganised spending planner. I suspect that my lifelong habit of frugality, through need some of the time, and by choice and a determination not to experience need later at other times, has led to my inability to sensibly plan expenditure before there's the money to pay for it. So it was only this week, after the proceeds from the sale of the cull cows and the weaner calves all arrived at once, that I phoned to arrange for the delivery of some roading metal (gravel/rock). 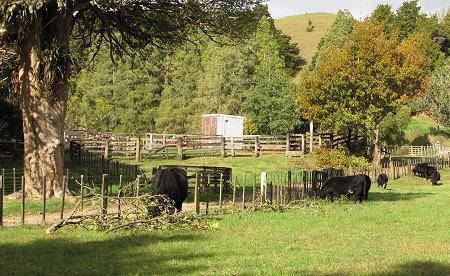 Knowing that a large truck would need significant height for tipping and spreading, we set about pruning all the trees with low or hanging branches which might get in the way.

I'm not going to show you how Stephan prunes trees, in case some other fool thinks it's a good idea to copy, so here's a picture of the bulls in the Pig Paddock, chomping pruned foliage from the Puriri next to the driveway.

The nice man from Bellingham Quarries rang yesterday afternoon to say they'd had a job cancellation and would we like the truck to start this morning? It would have been fantastic to start today, but I've been looking forward to attending a well-advertised Field Day over at Broadwood and every Drought Update email we receive has reminded us to "have a break, get off the farm", so I put the truck off until Monday.

The Field Day was held at the property of Peter and June Hick, at Broadwood. There was an excellent attendance of about forty or so farmers from around the district. We were presented with lots of information about the farm, the stock, performance of the animals and so on. There were presentations by financial experts looking at returns on farming, movements in property values and farming prospects over the next few years. Land values have escalated far faster than income from farms, and so have the costs of the inputs for farming. That means that the returns on the capital invested in land are very poor and younger people can't or won't invest in farming any more. The average age of the NZ farmer is now somewhere around 60. There are increasing concerns for older farmers who cannot continue the physical work of farming, but who cannot sell their farms - and selling to overseas investors is not a good answer for this country or its people, even though it might be a very positive option for an individual in the short term. 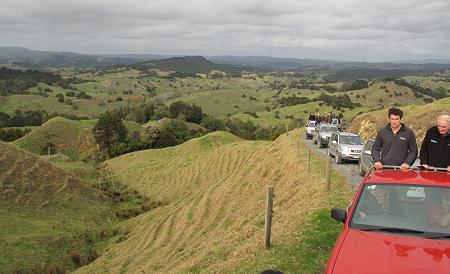 After lunch we all climbed into or onto the backs of four-wheel-drive vehicles and set off around the farm.

The land is mostly quite steep and all of it has been cleared by the hands of Peter and his forebears. To see it revert to gorse and scrub would be heartbreaking. 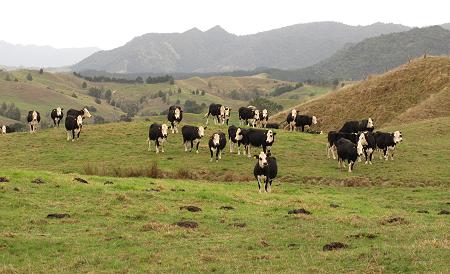 Peter has managed his way through the drought very well, although like everywhere else, the animals' production has been lowered by the reduction in feed quantity and quality, and the cows were lighter than they would normally be at this time of the year.

After stopping to look at the cows up on the ridge, we continued on along and then down through a beautiful patch of fenced native bush. There were some fabulous trees in there. 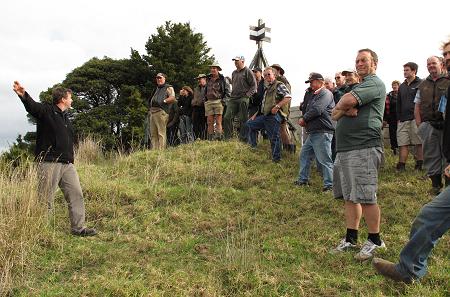 Then we went up to the airstrip, and a view across the rest of the farm, while Peter pointed out the boundaries and answered more questions about his farming practices. (That's Gareth Baynham waving his arm around in the picture, our former fertilizer sales rep, now farm consultant and facilitor at many of the local field days.)

There has been discussion at each field day I've attended lately about the usefulness of Kikuyu during this sort of season. Some people have apparently decided they probably won't continue to spray it out of their pastures, because it's the only thing still growing on many properties.