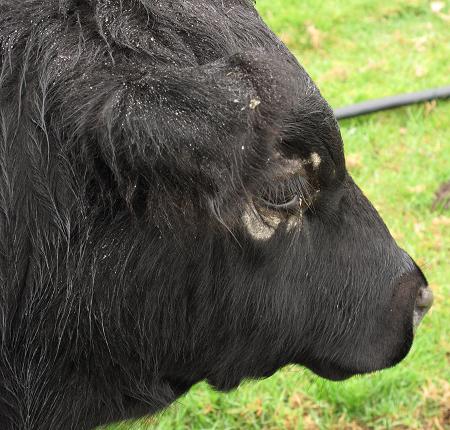 Irene 698's son, #90, with ringworm around his eye. Irene, Imagen and their calves were the last to be exposed to ringworm this year, being mostly separated from the rest of the herd - until they ended up grazing a paddock with the rest of the mob, separated only by an electric tape. The calves kept going under the tape, so had contact with the others and thus the infection spread. It seems to take several weeks for its visible effects to appear. 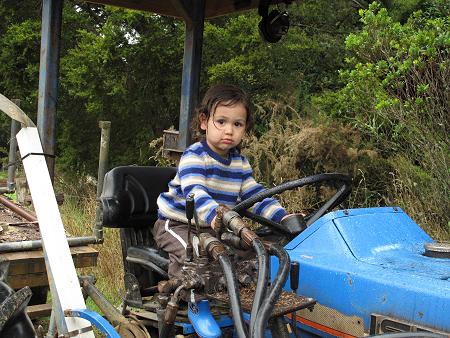 Sarah and Kerehoma came for a visit with Elizabeth and William this afternoon. Apparently this is our new boss: this is his farm and those are his cows! I don't know how seriously I'm going to take him when he still needs to be lifted down off the tractor by his lovely mummy. 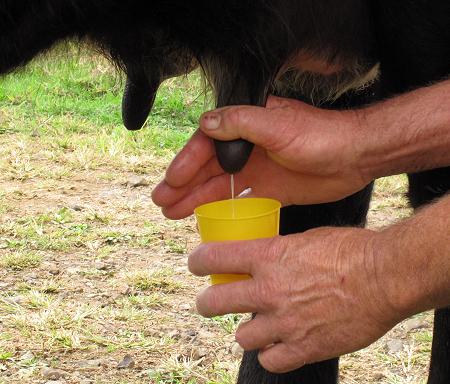 Over the last few days, when I've washed the muslin cloth I use to strain the milk, I've noticed it gets slimy as soon as I add soap. I recalled that the "home mastitis test" involves the addition of a detergent solution to milk and if the milk goes "snotty", there is mastitis in the cow. Wondering if the slimy cloth was indicating exactly that change, I decided to accompany Stephan this morning and collect some milk samples for direct testing.

I marked four plastic cups with the teat position for testing. At home I mixed one part detergent with three parts water, then put one part of that mix with one part milk, and swirled the liquid around for several seconds. 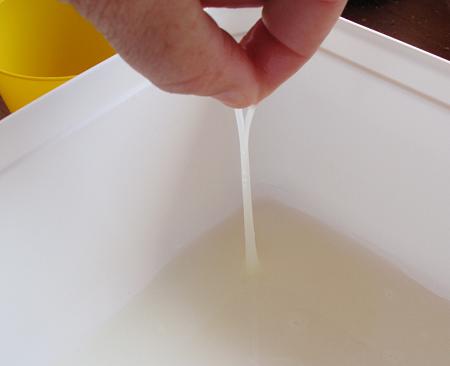 The milk from the back quarters showed no change when mixed with the detergent solution, but the milk from the front quarters obviously clumped in the bottom of my glass mug and when I poured it out into a shallow container, I could pick the worst of it up like this.

This is an indicator of sub-clinical mastitis. Imagen is well and there has been no detectable change for Stephan during milking, nor in the milk during processing. I'll test again in a couple of days.

Jill, who came yesterday to stay for a couple of nights, and I walked out to the Middle Back paddock because I wanted to shift the young stock. They did not cooperate and I did a lot of swearing. 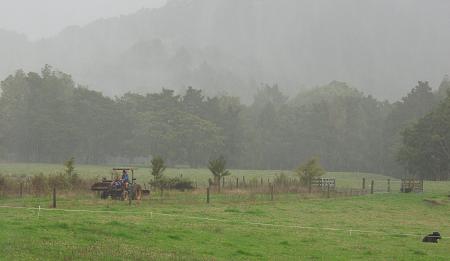 It rained. There was only 16mm, but it fell very heavily for several minutes, probably enough to wash most of the fertilizer down off the grass. 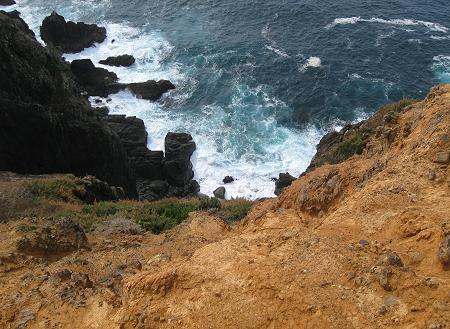 Stephan was out trapping today and this is one of the photos he took during his walk - looking down to the sea near Berghan's Head. The picture makes my stomach turn; I don't like heights! 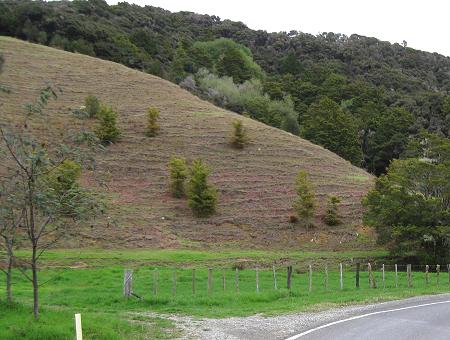 Another off-farm view from Stephan's camera on his way home this afternoon.

The smatterings of rain during the month have made any Kikuyu grass look a lot greener than anything else and while it hasn't grown a lot, it is the best feed around at the moment. This is the paddock I've photographed twice before along the Fairburn Road. I don't think there have been any cattle in the paddock since just after the first photo I took in early January. 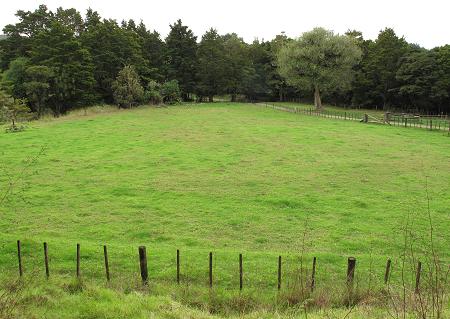 I took this picture of the Pig Paddock from the road, meaning to document the grass growth now we've had a bit of rain. It's quite a different paddock from a few years ago, when it was populated by rushes. There's a small view of how it used to be in the left of the first picture on the Farm Views page. 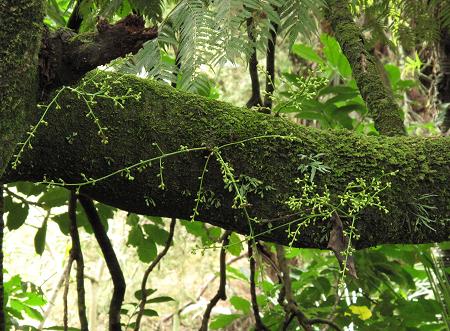 This is Kohekohe, Dysoxylum spectabile, with the flower stems growing directly from its trunk. 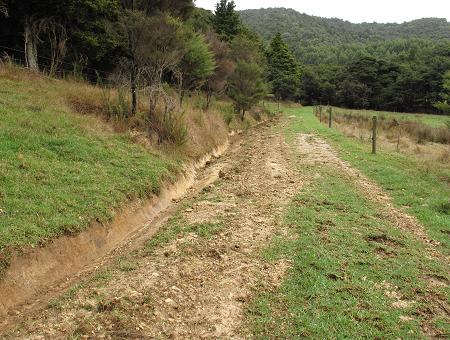 On another walk this afternoon with Jill, we inspected the drain maintenance Stephan was doing yesterday just before the rain came. Because it has been so dry for so long, he could drop right down into the drain with the tractor blade and drag it clear.

My weather data for April shows that only 52mm of rain fell, still less than 35% of the long-term average, continuing the pattern of the last few months.