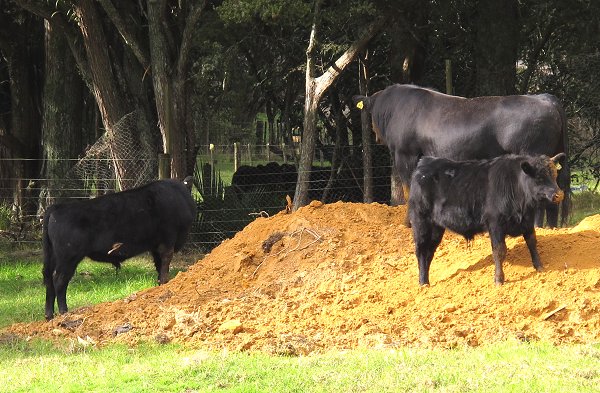 I brought both bull mobs in, separately, for their 7in1 vaccine.

I noticed that 113's faeces had a disturbingly red tinge, not unlike the calves have when they're suffering from Coccidiosis.  The cause in this case is more likely, I think, to be a bad case of intestinal worms, so while he was in the race, I gave him an ample dose of the pour-on drench and will watch him closely over the next few days.

Zella and the twins had their vaccine, as did the pregnant heifers from Over the Road.

We both spent some time with the twins in the race, scratching and stroking them, trying to settle them down a bit, because they're still disturbingly jumpy.  I need to tame them further and may bring them in purely for that sort of interaction again.

When we'd finished the cattle work, we cleaned up and changed our clothes and went out for High Tea at Elizabeth and William's house.  Char-Lien had made lots of delicious sweet things, with help from Miriam and Elizabeth and there were cucumber sandwiches, of course.  There was butter-milk cake, cherry cake, meringues, pikelets with jam and cream, coffee and a variety of teas drunk from China cups and saucers, with matching side plates.  We all ate far more than we needed to, but had a lovely afternoon.  The afternoon turned into evening and William produced pizzas to feed everyone, a gathering of 16 people.

Sometimes, in winter in particular, nothing much happens.  That can be a very restful thing.  On Monday the river came up and over the bridge, so we couldn't go out and do anything anyway.

I spent some time in town this morning with one of the vets, completing what is called a PAR consultation: Prescription Animal Remedies cannot be dished out to farmers these days without the vet either having seen an ailing animal and directly prescribed medicine for it, or having an ongoing relationship with a farmer whose stock are known.  In most cases of illness we'll have a vet out to diagnose a problem, but often the cause is something we've dealt with before and we're able to obtain any drugs we need, or have them on hand to use in those cases.  For instance, when Imagen had her mastitis issue, we were able to collect the drugs necessary to treat her, rather than having a vet come and see her in person.  The onus is therefore on farmers and their vets to ensure medicines are used responsibly! 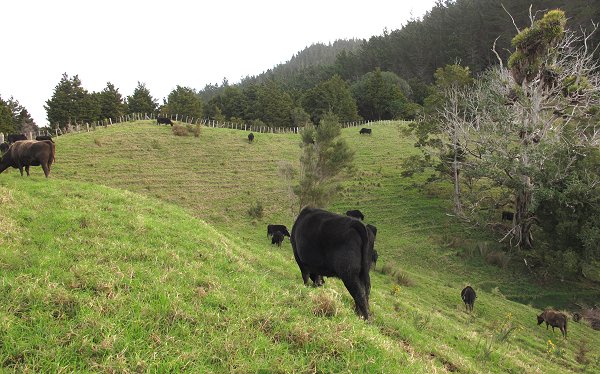 When I walked up the PW hill this afternoon to move the cows into the Middle Back, my lower back did the same thing it did a few weeks ago and slowed my progress right down!  I imagined I might need to radio Stephan to bring the crutches out for me to get home, but by walking very carefully, I managed not to hurt my back any more. 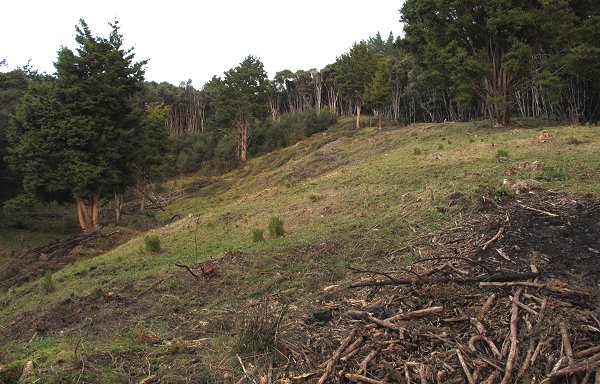 This is the slope Stephan and Lance worked on last week.  There's sedge here (those clumps of stiff green grass), which we'll have to kill before it spreads.  If we forget, this will be one of those "before" photos I refer back to later ... 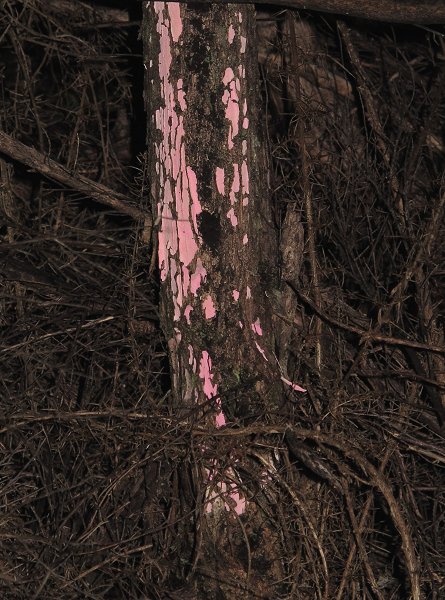 I have looked for this tree when walking through here since I first saw the pink fungus, but I suspect it is not always "blooming" like this.  The tree is right next to the track, at just above eye level, so I doubt I'd have missed it if it was visible all the time. 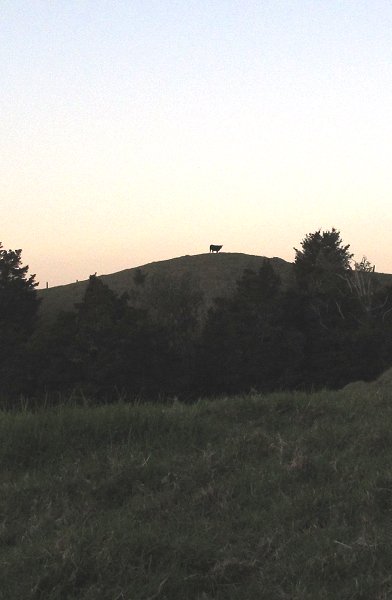 We both walked up the road and over the far gateway to check on the heifers in the Over the Road paddock, my back not quite being up to too much clambering up and down hills and I hoped Stephan would carry me home if the need arose.

We found eight of the heifers quite quickly, but there was no sign of Emma 93.  Stephan went up and down the gullies hunting for her stuck somewhere and I gingerly walked back toward the gate opposite the farm's entrance, finding nothing.  I had just called Stephan on the radio as I made my way up out of a steep corner and looked up to see Emma on the top of the hill in the other part of the paddock.

Emma 93 put herself on the probable steak menu just after weaning in 2010, but I ended up keeping her and have been quite pleased with her behaviour since she grew up; but this is bothersome.  We couldn't work out where she'd got through the electric fencing to end up over in that part of the paddock.  Stephan went over and chased her down the hill and through the gate so she's back in with the others. 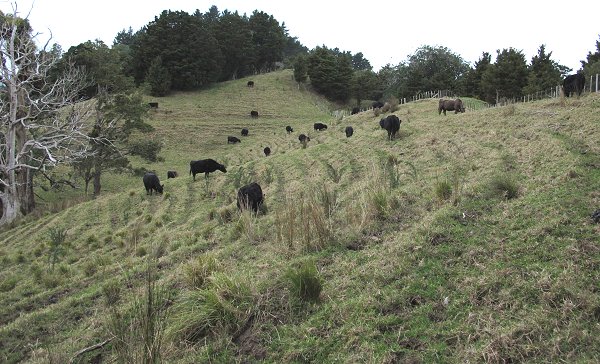 The cows really seem to like the Middle Back, despite it not having had much in the way of fertilizer or lime to improve the pasture.

There wasn't a lot left to eat, but they seemed quite content to stay where they were, so I left them. 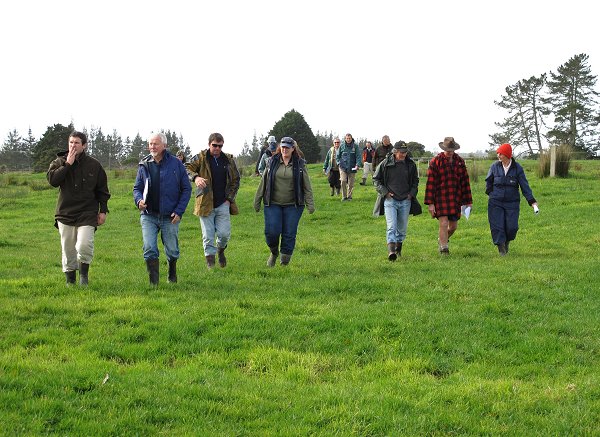 We went over to Kaeo, on the east coast, for a field day which started with a morning of presentations and discussion in a small hall in the town.  After lunch, the group travelled a few kilometres up the road to the farm of a couple who are the current Monitor Farm participants.

There was so much grass!

A couple of things on the day's programme interested me, one being a trial on herbicidal control of Carrot Weed, whose name is actually Parsley Dropwort.  While there was a reasonably good response in the area recently sprayed, I don't think it's a control measure we'll take on our farm.  I am opposed to widespread spraying of the pastures to control pest species which are not toxic to the stock.  The advice from those conducting the trial was that spraying would need to occur on an annual basis, if widespread control was to be achieved.  But in its early stages, the plant is highly palatable and nutritious to the animals.  If allowed to get away too much, a paddock takes a while to get back into good order, but we manage that tolerably well, I believe.