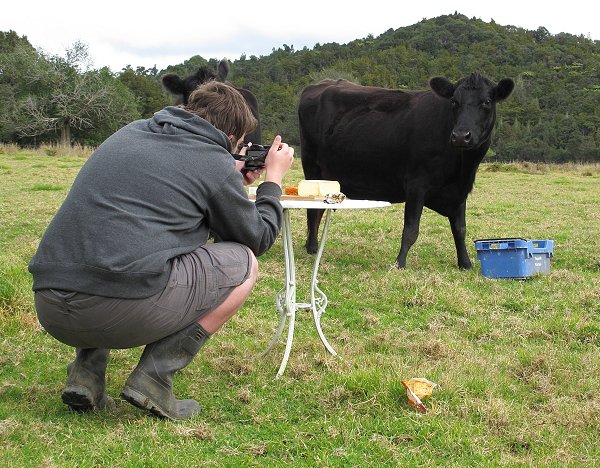 Lance is doing some sort of multi-media project at school about Bovine TB, so came out today to record a bit of video of us talking to him about it.  Then he asked if he could take photos of Zella along with a variety of cheeses.  Zella was quite cooperative, as she always is when bribed with Molasses. 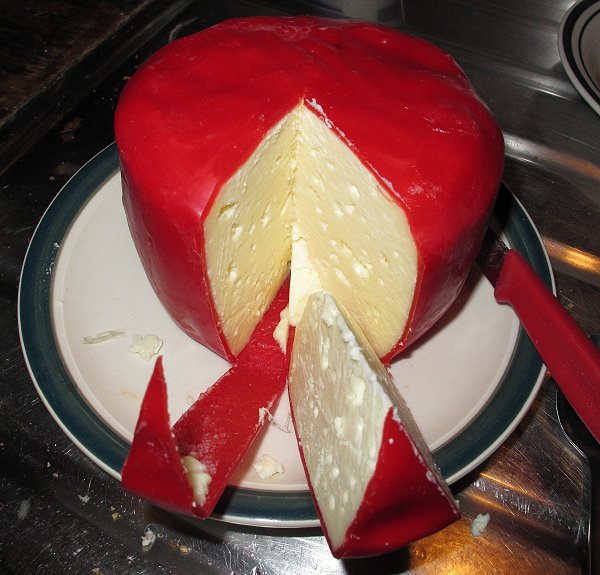 This is one of the Edam cheeses Stephan made a few months ago and while I don't think it's supposed to have bubble holes, it tasted right.  Its texture was a little different from commercial Edam, but it's definitely edible.

Stephan has been a bit disappointed in his cheeses, with several going bad during their maturation period.

Zella had her last milking for the season this morning, it now being 12 weeks until I expect her to calve. 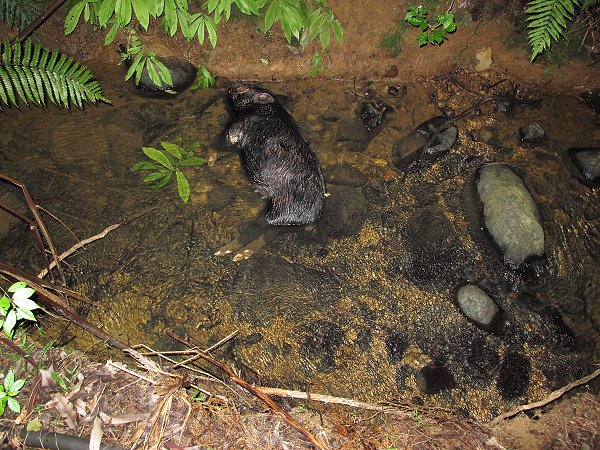 A pig hunter who came with our usual invited hunter last week, lost a dog to poisoning.  We haven't used any toxins for some months, hoping the pig hunters would do some hunting while the pigs are particularly active and reduce their population a little.

The dogs all had GPS collars on, so the dog's owner was able to track back over the path the dog had taken on the day to figure out what it might have eaten - although pig-hunting dogs are supposed to be trained not to scavenge when they're hunting - and found this dead pig in the stream.  Stephan and I went out later and pulled it up and out of the way of any floods, primarily because I don't want my cattle drinking water full of decaying pig.

It's not the first time a dog has been poisoned in the area and while we have our suspicions about who might be doing what, it's impossible to know anything for sure.

The man whose dog died told me all sorts of scary things about the toxins he thought had killed it, but afterwards I realised how muddled his understanding was.  That prompted me to do some research about the various pest-control toxins to clarify my own reasonably good understanding and I will write an article about them for NZ Lifestyle Block Magazine.

I spent most of my day writing for the magazine and catching up with some Vet Council work.  In the evening I fell asleep on the couch!  That's not something I can ever remember doing before, except when ill. 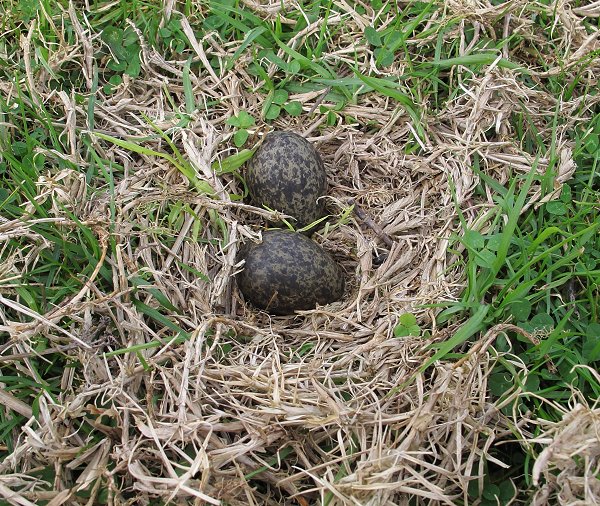 I opened the gate for the cows to come into Flat 5a this morning and walked across to shut the gate at the opposite corner and noticed this little nest in the grass.  I couldn't stop the cows coming in, so quickly thought about how I could prevent them disturbing the nest.  Of course, when I went back to find the nest again, I had to look very hard, because I'd not marked it and it was invisible unless I was right over the top of it. 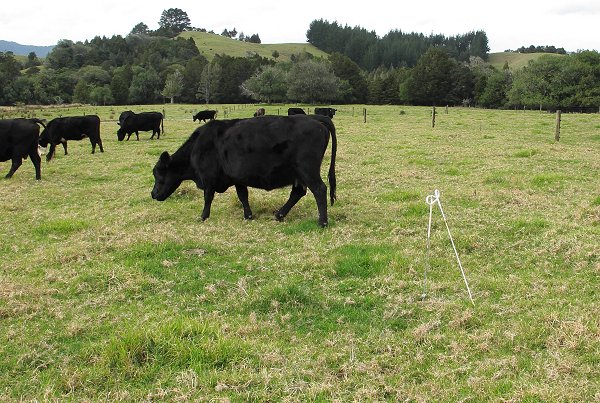 Having only a couple of electric fence standards near-by, I hoped they'd be enough to stop the cows from standing on the eggs.  Later on I let the cows through into 5b (they were just doing a quick clean-up in here) and the eggs were still warm.  The parent birds go a long way away from the nest long before I get anywhere near, so it's only by having observed the Spur-winged Plovers' defensive manoeuvres with the hawks that I deduce they are the the owners of the nest.  The eggs are quite similar in colour to those of Pukeko, but the nest is quite different.

Thursday the 1st of August & Friday the 2nd

A couple of unpleasantly rainy days meant no photography.  I went out walking to check cows, as usual; I particularly enjoy walking around the hill Over the Road when the weather is wet and windy and the view includes misty cloud rolling down over the hills at the back of the farm.

I sustained a kick in the knee today, courtesy (funny word for such an event) of Ms 657, when I was trying to encourage her to lead her three companions out of the Camp Paddock and into the Windmill.  All three of the 2010-born heifers are scatty and I'd love to be able to figure out what's wrong with them.  The winter before their birth was relatively warm and feed was not in terribly short supply, so their mothers should not have been stressed; it was a winter during which the cows received three copper shots, so there should have been no deficiency there either.  They're by three different sires, three different cow families.  I gave their mothers Magnesium before they were born, so it seems that all the basics were covered in terms of their physical beginnings.  If they don't all settle down, they'll have to be exceptionally productive and easy-keeping cows to stay in the herd for very long.

July's rainfall was 117.5mm, 56% of the average, third lowest since 1999 when my records begin.  That explains the lovely firm ground conditions.  The temperatures were about 1.5° cooler than average.