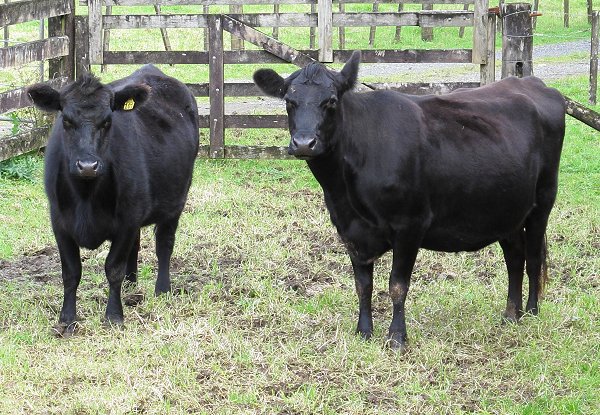 Dexie and Zella, in the yards ready to have their copper injection.  I've been giving them all copper before the 7in1 vaccine, thinking that they'll probably have a better immune response to the vaccine if their copper deficiency is addressed first and that because receiving the copper is stressful, it would be better not to put them through that after the vaccine and interrupt their response to it.

Dexie's lost her NAIT tag already.  I wonder how often that's going to be a problem?  At about $5 a time, it had better not be a frequent occurrence.  Bull 96 doesn't have his either.  I have a number of spare tags, which would have gone into animals which have gone to the works already.  Because the NAIT scheme started later than planned, we didn't put them in those earlier-culled animals.  I believe it's a simple matter of reassigning a NAIT tag to a visual tag number, although if it isn't, it doesn't seem to matter, as long as they go tagged.  I begin to see a number of holes in the system - although because all my animals are born here, sending someone to the works with someone else's number doesn't really matter, as long as I know who they were, in case of later enquiries.  Bearing in mind how easily animals still get lost in the works system, I'm not sure it'll ever matter. 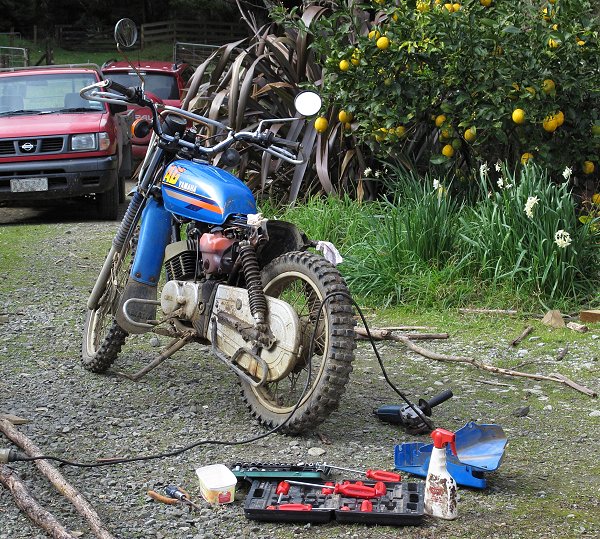 My motorbike has disintegrated at a couple of very important points!  The young mechanic who last serviced it commented on some rust points on the frame a few weeks ago, but obviously things were worse than he thought.  I'm disappointed nobody else brought the decay to our attention when they had the bike in the shop on previous occasions and we might have had a chance to put things right before it got to this sad stage.  The cause is my carrying salt blocks on the carrier, after which I've obviously not been washing the bike carefully enough.  Stephan took it to pieces to see what he could effect as a temporary repair.  We'll have to see if we can source a replacement frame, or work out how to replace the sections which have rusted away.

To keep me going, he managed to get a couple of large bolts to sit down inside the remaining frame and their other ends inside what's left of the rusted bit which holds the seat and carrier.  It's a bit wobbly, but should hold together for a while.  I don't go anywhere in a great hurry.

Louie went home this afternoon on the plane in which Jane had come home, so I had to ask her to wait while I fulfilled my obligation to wait until the plane had left the airport, as required when sending an Unaccompanied Minor.

I spent a couple of hours with Nut, a lovely woman from up the road at Earth Spirit, who has recently bought a laptop PC and was having some email problems.  It took me a little while to work out what had gone wrong with the initial set-up of her email account, but we got it working and she went home very happy.

Our water went off, so Stephan and Ella set out to find out what was wrong: the filter had become blocked and silt building up beneath the pipe had raised the filter too high and it was sucking air.  Easily enough fixed and it's reassuring that nothing has needed to be done to the system for months since the last improvements Stephan made. 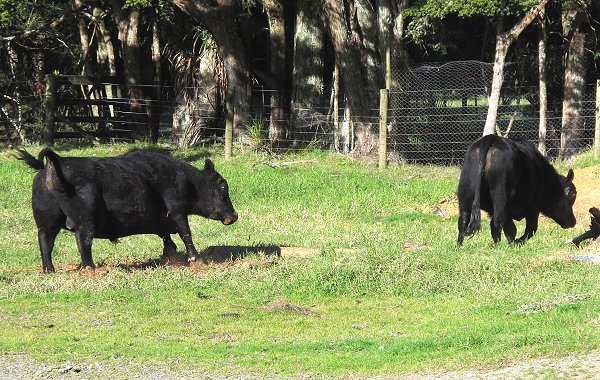 I brought the two bulls in for a copper shot.  They always go silly when they get down past the house into the wide area we call the triangle.  The bull on the left is not as small as he looks, it's just that he's in mid-twist and gallop, tilted sideways away from the camera.  I generally let them have a few minutes to settle down, before trying to move them on over the bridge and out to the yards.

We took Stephan to work early this morning, because Ella and I needed the ute to get to the airport to pick up Jasper and then this afternoon to take Ella to catch her plane.  Fortunately Jude rang and left a message just as we'd turned in the direction of the airport, to say the morning plane had been delayed in fog, so we went home instead.  A little later, lots of the regional flights including Jasper's, were cancelled. 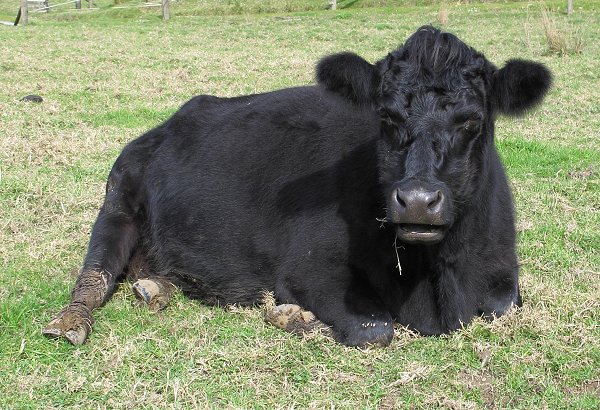 Queenly's such a pretty cow and she has the softest hair of all.  Over the years she's become more and more tame, so that these days I can actually scratch the top of her head sometimes; she used to get twitchy when I got as far forward as her shoulders.

Queenly was born in October 2004, last calf of Taurikura Queenly 486.  She's in calf this year to Pono of Kawatiri, courtesy of Mr David Bone, who sent me some free straws of his bull's semen. 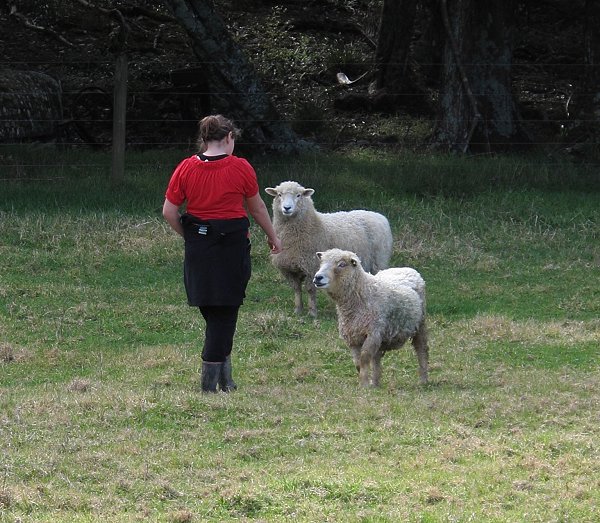 Ella wanted to walk through the sheep on our way home, while I carried on along the lane.  Yvette hopes anyone in the paddock will be bringing her sheep nuts.  I've been giving her a few handfuls as often as I remember lately, because her condition has dropped.  At 14 she's getting pretty old. 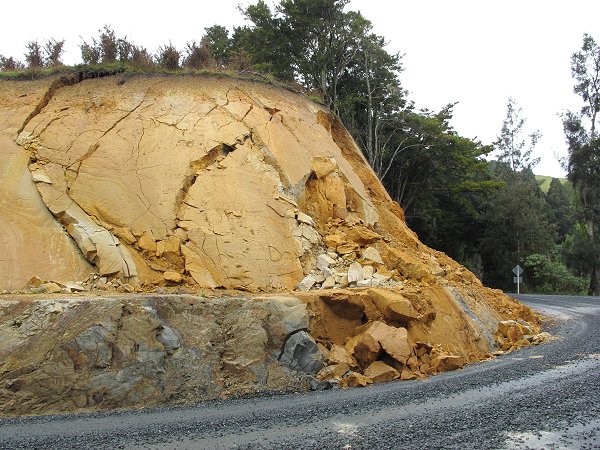 This morning we saw that the corner bank has finally given way, so Ella and I wandered around for a closer look.

It seems strange that this has happened at the end of a week without rain and I have wondered whether the big earthquake in Wellington yesterday evening (which was registered significantly on the seismic drums as far north as Omahuta, over the other side of the Mangamuka Gorge) caused enough disturbance here to shake this bank apart.  Someone later in the week mentioned a similar occurrence somewhere along the Fairburn road.  With reports of swimming pool water in Auckland sloshing about, I suspect that although we did not feel the tremors, there was enough vibration to do this.

Rain is forecast on Wednesday, so I rang the Council and suggested something urgent be done to clear the collapse away from the culvert at least, or the whole lot might come down and make even more of a mess.

This afternoon we went to the airport and I swapped Ella for Jasper and after waving good bye to Ella, Jasper and I went and collected Stephan, whom we found walking along Fairburn Road.  Having walked all day in the bush, he seemed quite happy to be walking home.  Maybe it was his new boots - we asked [a vendor we will no longer use due to subsequent unsatisfactory service] to make him another pair for trapping and they arrived in the mail the other day. 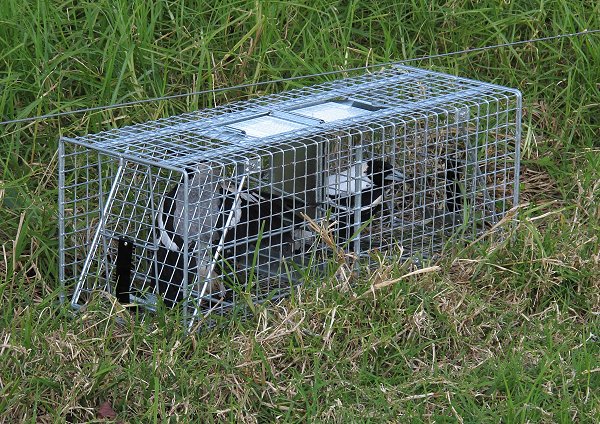 We caught these two today, two more on Wednesday and another one later on.  That's six taken out of the population so far this year and another three or so to go - I had thought there were more, but it seems they just look like a huge flock when flashing their black-and-white around the farm. 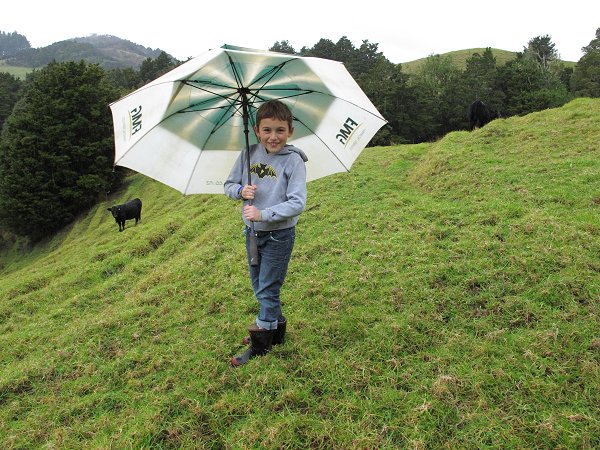 The forecast rain came, although fortunately not in as great an amount as expected.

Jasper and I went around the corner several times, to see if the bank had collapsed any more and while the cracks widened, nothing more significant occurred, much to his disappointment.

We climbed the hill so I could check on the heifers, which were all gathered on the near slopes.  They didn't seem too concerned about this short person, even carrying an umbrella, although I did have to make sure he made no sudden movements while I went around ticking off tag numbers.

I was about to take Zella and Dexie to the yards for their vaccinations when there was some unusual noise out on the road, signalling the arrival of the road-works crew and Dexie got terribly nervous and looked like she might jump over anything to get away from whatever she could hear; so I gave up that plan for the day.  I have no idea why she's so nervous. 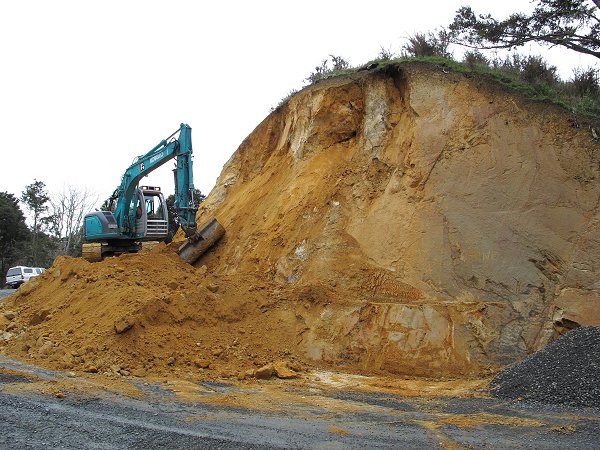 I suppose this is about as urgent a response as we can expect from our Council.  The digger driver told me he lives up the road and had also reported the problem on Monday, but someone had to have a look, then the work had to be approved ...  There was in the end only a little over 19mm of rain, so ground conditions aren't bad for working. 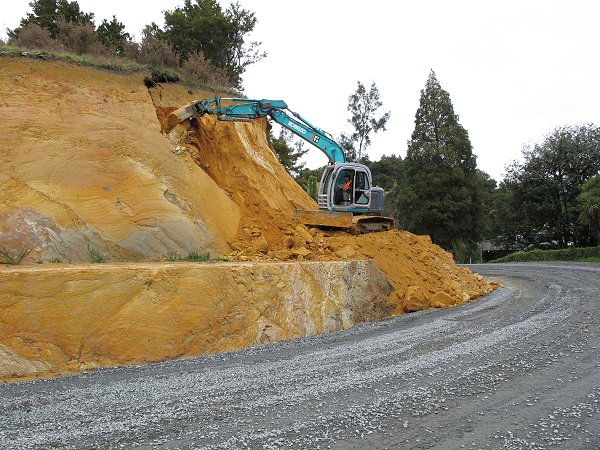 It was interesting watching as the driver pulled soil down and gradually built up the level upon which the machine sat, so he could reach further up the bank.

They (he and the trucks taking the soil away) worked here into the next week, but did not pull down the whole face where it has cracked.  I wonder if they ran out of room to dump the soil, or time, or what?  The rest will presumably fall down soon enough and they'll have to come back again. 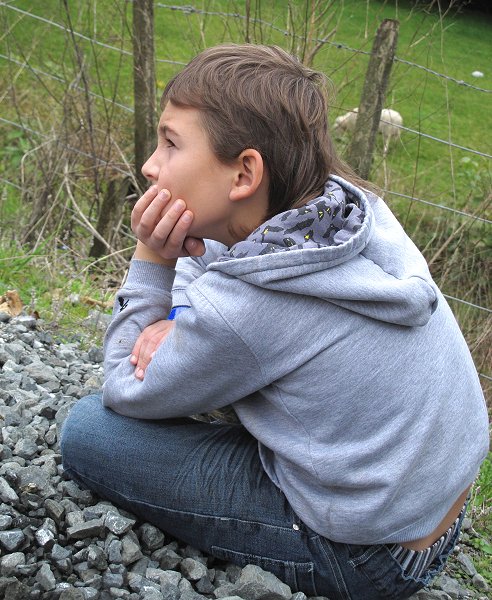 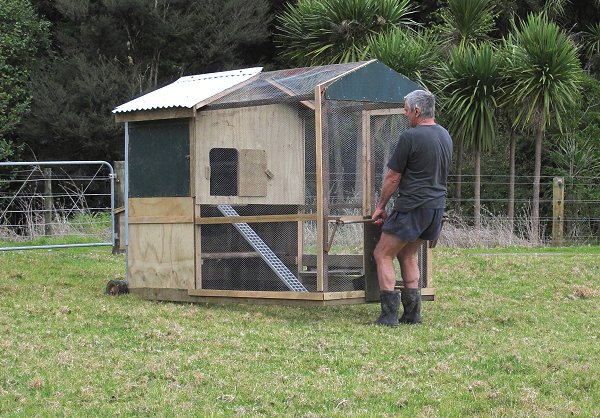 The Poultry Palace, now complete with roosts upstairs and down, a water trough, feed trays and hay in the nesting boxes, disappeared from the front of the house this afternoon!  I hadn't heard the tractor and didn't realise Stephan was managing to move it, just as he'd said he would, on its dual wheels (he'd had to weld the wheels to an iron bar to make an axle to hold the structure).  It was very heavy though, so he pulled it along in stages and I went and helped by placing boards across a drain and he loosened the fence wires to get it into the native area where the chickens usually live and then put them all in it.

The idea is that if there's flooding, as there often is, the chickens have somewhere warm and dry up out of the water.  The cage is so heavy, it shouldn't be carried away by the floods. 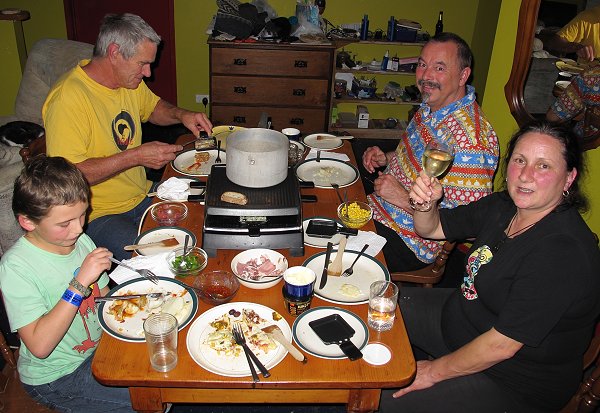 When we first met Lilo and Peter, we went to their place for dinner one evening and they gave us our first Raclette Cheese experience.  Tonight they brought it all to us, since we have a young guest who will need to get to bed earlier than we'd want to go home.

Raclette cheese is for melting and during dinner parties such as this, the diners select any of many cold and raw foods (including onion, bacon, sweetcorn, olives, capsicum, much of which we had to place on a side table out of the picture) to grill in their individual little pans and then add the sliced Raclette cheese to melt over the top.

The electric element under the hot plate grills the pans - you may see two handles sticking out on either side and one at this end.  The pot on top contains cooked potatoes which are sliced by the diners and they then pour the grilled contents of their little pans over the top.  I toasted slices of Peter's excellent bread to try out as well, by laying them on the hot plate.  Jasper worked out he could make potato wedges and grill them for himself and had a great time.

We had a lovely evening together and despite some later discomfort, the result of a little too much cheese and wine, I very much look forward to doing it again sometime.