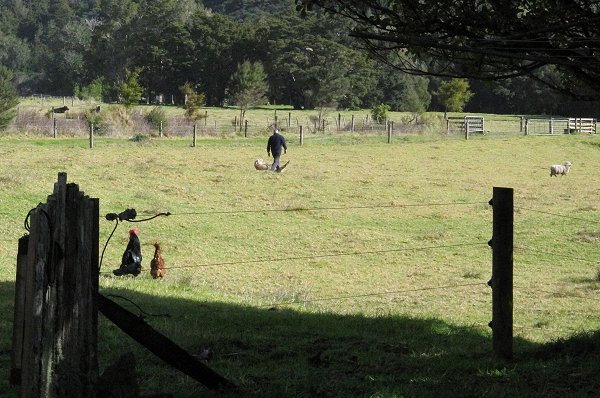 Silly ewe.  Stephan keeps uttering "cull" under his breath.  She certainly has more than one mark against her name already, with her susceptibility to flystrike.  The sheep are just cruising around eating grass and not doing anything much of use for the farm, since we've not bothered to get them in lamb for a couple of years.  She's a bit old for mutton, but sausages, maybe...

I had thought we were having to turn over the Young Ewe repeatedly, but this week noticed the hole in this ewe's ear: she's the Tag Ewe, but her tag has broken and gone. 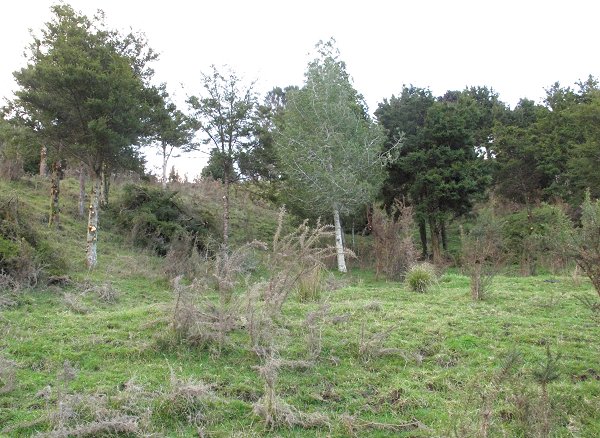 Stephan has been doing a lot of pruning and clearing up the Small Hill slopes.  He's been spurred on by my having found a photo of the farm from my early years here, when the hillside was mostly clear.  Clearing the low-growing branches of Totara trees creates a lot more grass-growing area and it's easier to find the cattle.

It was a seriously cold day, with some rain expected to be carried with the southerly wind, so I ensured the animals all had some shelter from that direction.  The three bulls and Demelza can shelter along the Bush Block's fenceline when they're in the 5b and 5c paddocks, so I opened gates to allow them access from the other parts of Flat 5, where they've been grazing. 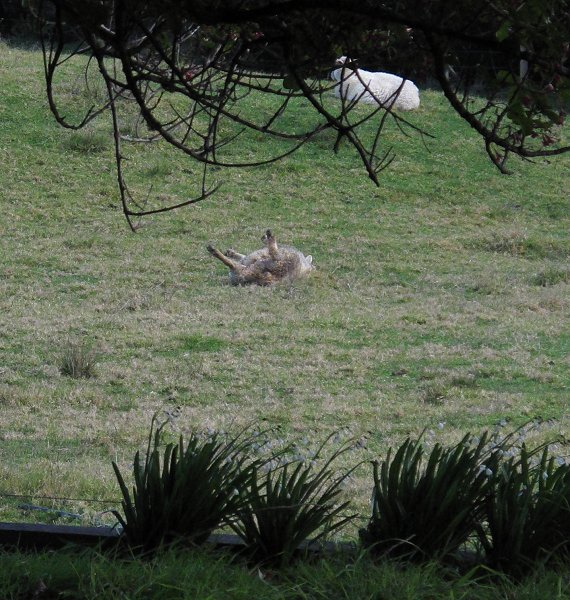 Ridiculous.  Fortunately the ewe is never on her back for very long, because it's easy to look out the window and make sure there are ten of them.  They really need moving to their usual grazing in the old Chickens Paddock, but we'd tend to check them slightly less often.  Maybe she can move to the freezer and the others can move to new pasture. 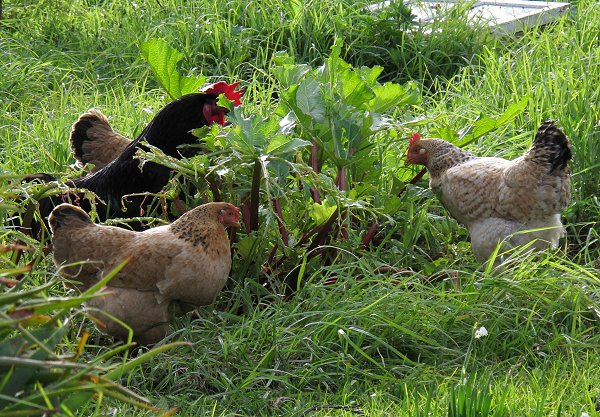 Rhubarb leaves are supposed to be very poisonous, but during the winter months birds seem to like them.  The chickens have spent a lot of time eating most of the green parts of the leaves. 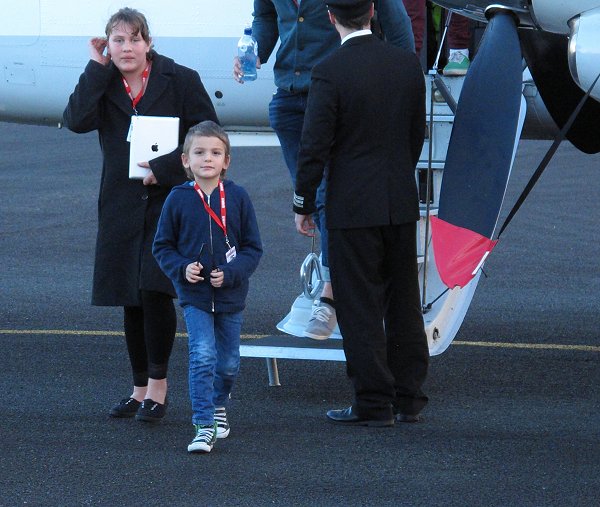 Our Children on Holiday programme began today with the arrival of my nephew Louie and our daughter Ella.  Jude booked tickets for her two boys to come separately in each week of the holidays, and then later we asked if Ella would like to come up for a visit as well, which she did.

Air New Zealand takes good care of the Unaccompanied Minors, ensuring their safety in transit.  The collecting guardians are required to sign for them when they arrive - and if we weren't well-known to the airport staff, we'd have to provide photo ID as well.

While it can sometimes be significantly more expensive to transport the children by air, it's vastly safer in terms of their supervision, than sending them with Intercity Coachlines on the buses!  The Unaccompanied Minor forms for that "service" require us to absolve the company from any responsibility for the children.  The bus drivers don't provide any supervision if they're not personally inclined to and there's no check on who collects the children at their destination.  Travelling between Auckland and Kaitaia also involves a change of buses at Kerikeri, which again is uncertainly supervised.  Jill was left behind there last summer by a careless driver, and while (unfortunately) no special assistance had been requested for her passage, it seemed there was a very lax attitude to ensuring all passengers were present when the bus departed.

Heifer 713, now our nominated home-kill animal, is due to meet her end on Thursday and when I saw her on heat 13 days ago, I felt pleased that her slaughter date would be safely distant in time from that upset, because of the likelihood of her having sustained some bruising from the other heifers mounting her.  But today she was on heat again!  I now think I know why she didn't get in calf: she must have cystic ovaries, which means she cycles every couple of weeks, rather than according to the usual 21 day cycle.  Fortunately she's currently only with two heifer companions, not the whole mob and Sniff, the butcher, thinks she'll be alright.

We had a most unwelcome deep-freeze night, where the temperature dropped early in the evening and probably stayed around freezing all night.  That tends to be far more damaging to the plants than the short, sharp, dawn frosts we've already had.  Both sorts of freezing damage the pasture, but a deep freeze all night causes more damage to young saplings and can probably sometimes affect even the larger trees. 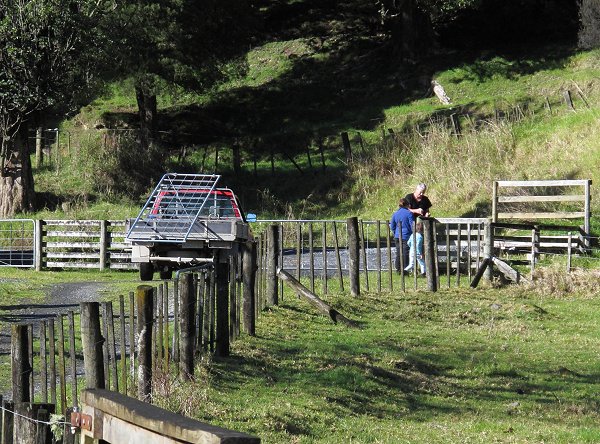 We acquired a new gate last week and Stephan and the children went out to install it this morning.  The damaged one stood up on its own when placed on the ground, it was so badly bent.

Hopefully nobody will drive into the new one, although I think we may have to do a bit of levelling work on the road metal at the approach to the gateway, since it's much steeper now than it used to be.

Xavier, slaughterer, came early this morning (a day earlier than first planned) to do heifer 713.  Louie and Ella came out with me to get the three heifers into the small area I wanted them to wait and Xavier arrived and shot 713 while the three of us watched from behind the loading ramp.  I'd had some conversation with them both about which parts of the process they did and didn't wish to observe and it was the first time I can recall actually watching as the animal dropped, for some years.  The process makes me quite anxious, having seen (and heard a number of stories of) shooters missing their target.  Xavier doesn't miss.

The children both stayed for a little while, Louie opting out when it all got a bit too gruesome for him.  For me the worst is over when the animal is safely slumped, because then I know the right one got the bullet, know she's then safe from trauma or pain and it's just a case of getting on with the job.  I like to watch and check various aspects of an animal's physique and internal health.  I ought to have kept her reproductive tract for further investigation, but was distracted at the crucial moment.  Xavier commented on her ovaries - he must get to see a lot of normal and cystic ones for comparison.  I did pull her intestines out for some inspection, being curious to find the area of the intussusception in 604 last summer, but I'll have to do further reading and research to discover whether or not I was in the right place.

When she was first on the ground, I noticed 713 had a somewhat swollen left rear teat and I feared that perhaps I'd made a terrible mistake and she was in calf ... but it was not so.  That would have been a very disappointing finding, given that such a discovery would have been far too late.  I rely entirely on my own pregnancy "diagnosis" these days, rather than having the vets do it, since I nearly always knew all the answers they gave me, from my close observations of the animals. 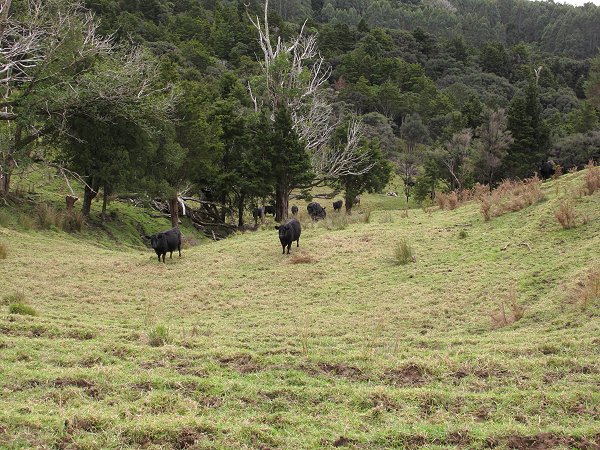 I am always gratified by the cows' willingness to come from somewhere they're happily lying in the sunshine, to wherever I'm calling them.  I'd already been right down to the bottom to tick them all off my list, then called them to follow me up to the gate into the Big Back. 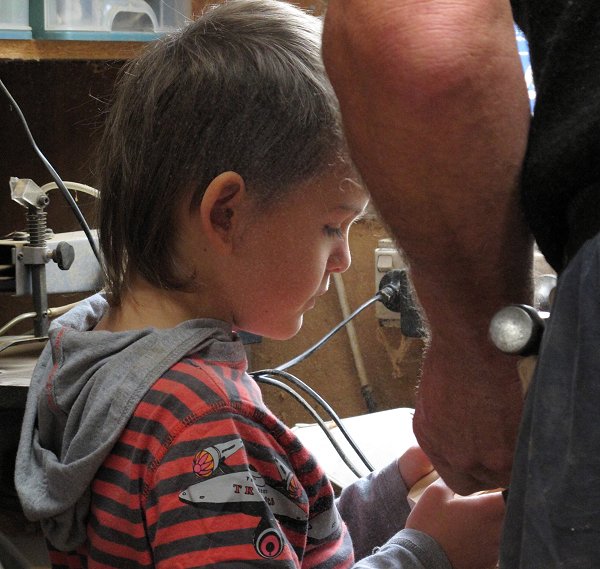 Louie and Ella were making things with Stephan in the workshop, when I returned. 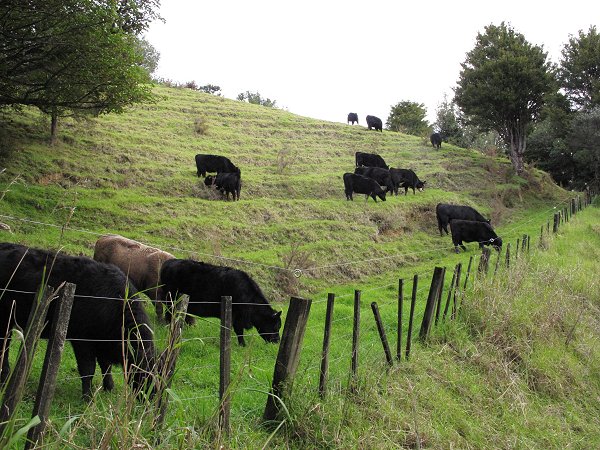 We took the two heifers who had accompanied 713 for the last week back to the rest of the heifer mob, then when they'd had some time to sort out their social structure again, took them to the yards for their annual 7in1 vaccination.  Then we put them across the road.  The cattle from the neighbour's block have been moved, so it should be safe for mine to graze the hill without interference. 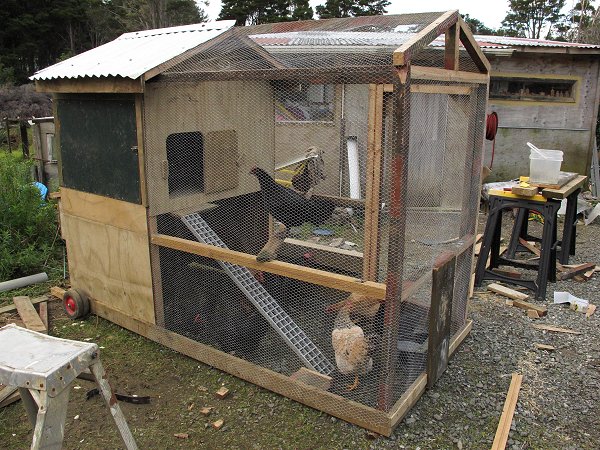 This evening the Poultry Palace was almost completed and the birds spent their first night inside.  It still needs a bit of plywood on the end (the young pullets all escaped to roost in the trees as usual) and some roosts inside the house part and underneath in front of the nest boxes.

Goodness knows how Stephan intends to move this hefty structure to where it is intended to reside. 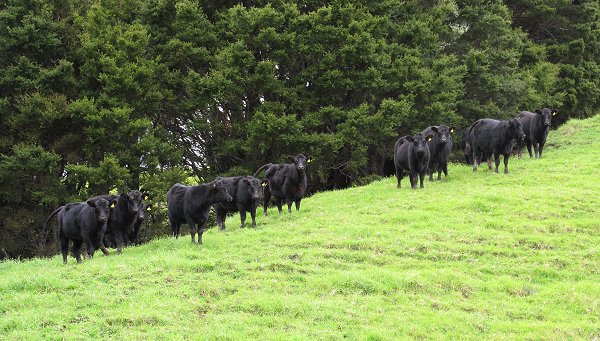 Ella, Louie and I walked up the hill to check the heifers and they really didn't like Louie's presence!  They're a little nervous around some strangers although they're usually ok if people are adult-sized; but little children really spook them and after this picture they all ran away across the hillside. 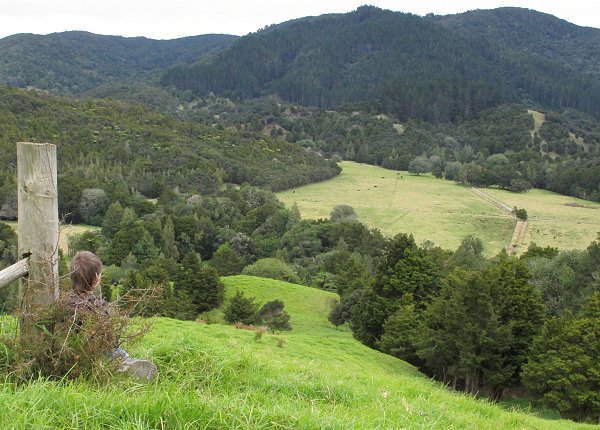 Louie, sitting on the old log at the top of the hill, looking out over the farm.  It's a lovely place to be. 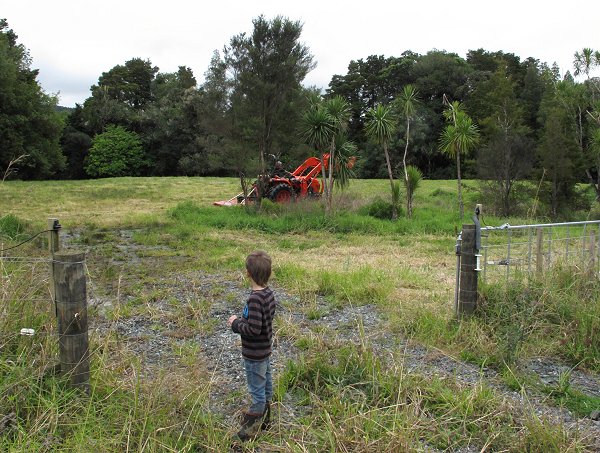 Later in the day we went up the road with the slasher, some string lines and pegs to start marking out the orchard area we'd decided upon with William.  Stephan mowed a clear strip, we set out a straight line along which he mowed again to give us somewhere to measure from and we set out string rows five metres apart.  Then, while the children and I went off exploring, Stephan sprayed glyphosate (herbicide) along the rows to kill off the grass, in preparation for planting trees. 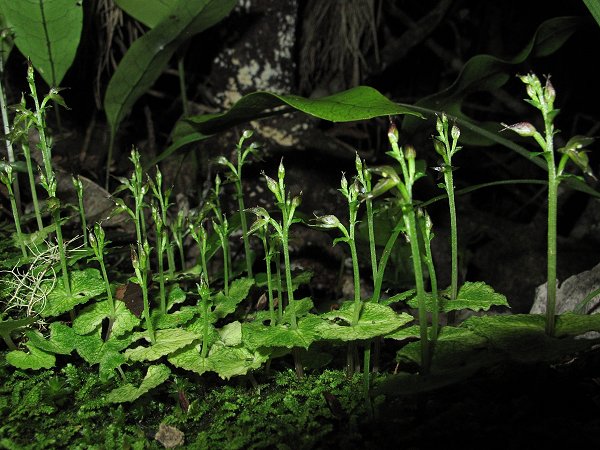 Louie, Ella and I headed into the bush by the side of the road, looking for interesting things.  I hadn't taken quite this path before or I would surely have happened upon this thick little group of orchids: Acianthus sinclairii, the Pixie Cap orchid, all growing on an old bit of fallen tree trunk.  These plants usually grow singly scattered around an area, rather than together like this.  This log must provide an excellent growing medium for it to be so favoured. 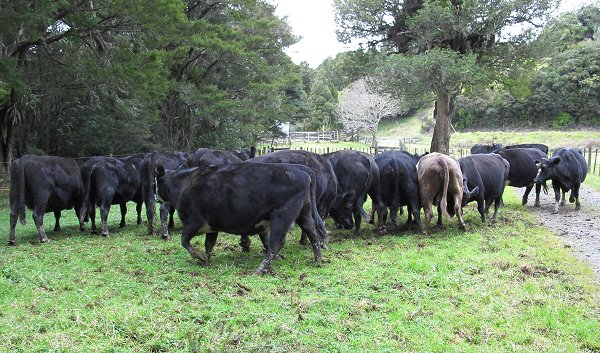 I had intended to go to a field day over at Taupo Bay, but in the end decided it was too far (about an hour and a half's drive, over on the East coast) and too much trouble to organise when there were children to consider and possibly more useful things to do with the afternoon.

I brought the cows in to the yards instead and gave them their 7in1 shot.  I've taped off the area around Wednesday's homekill site, but the cattle still smell what's left and get very excited.  I've never quite worked out the nature of their excitement; it surely can't be fear, or they'd all run off in panic, but instead they gather as closely as possible and stamp and paw the ground, snorting and bawling in a particular way which always brings everyone else to see what's going on.  But cows also demonstrate the same sorts of behaviour around a newly born calf, so I presume it's something in the smell of body fluids and remains with which they normally don't have contact, but recognise as their own.  I keep them off the direct area to save trouble with animals accidentally trampling on each other in the rush, but there's still a lot of excited reaction.  Once they have gone past and in to the yards, they're as quiet as usual, so I deduce that they are not unduly upset by the experience.