The week beginning the 6th of July 2013.
Saturday the 6th 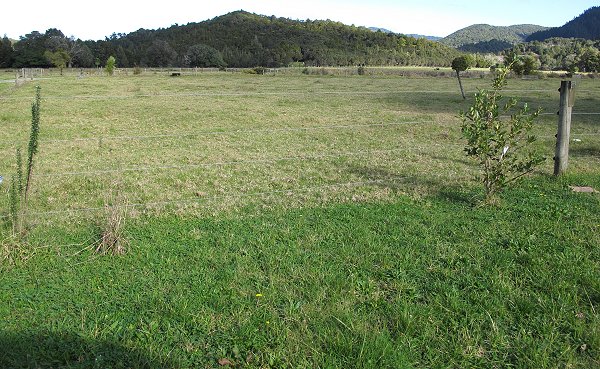 I was sitting writing the web page in a cotton sweatshirt and sandals with the doors at both ends of the building open because otherwise it was just too hot!  This is fantastic weather for July.

But outside is the bleak evidence of the recent frosts.  In the warmth of the last couple of days, I'd forgotten I was expecting this change and thought, gosh, those sheep have eaten a lot all of a sudden!  But the whole of the flats look like a mob of a thousand sheep has been through, taking most of green from the paddocks.  This is what frost does to Kikuyu.

Previously the paddock beyond the fence was the same colour as the lawn area on this side.  The composition of grasses in the lawn is different from that of the paddock, so it hasn't changed colour in the same way. 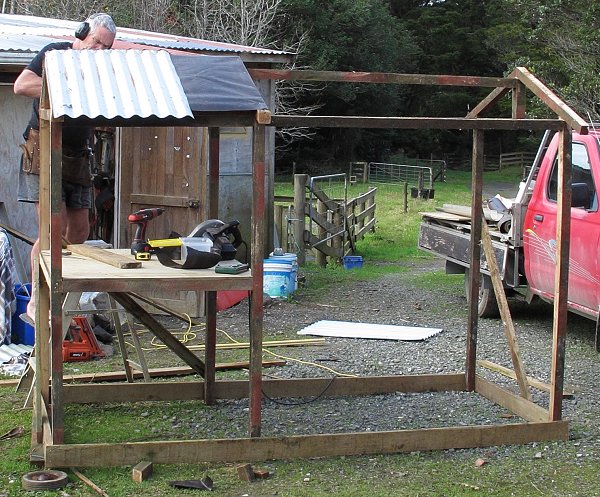 Stephan is building a palace for the poultry.  Their current smaller cages are leaky and cold and because the best place to keep them is down by the pond, they need a home with enough height to keep them safe from the occasional floods.

The roof space of this cage has fibreglass insulation!  Stephan has talked of a window with a window-box of flowers.  I don't think that will happen, but I wouldn't put it past him.  Most of the timber came from a good paling fence which was offered for demolition in town a few months ago. 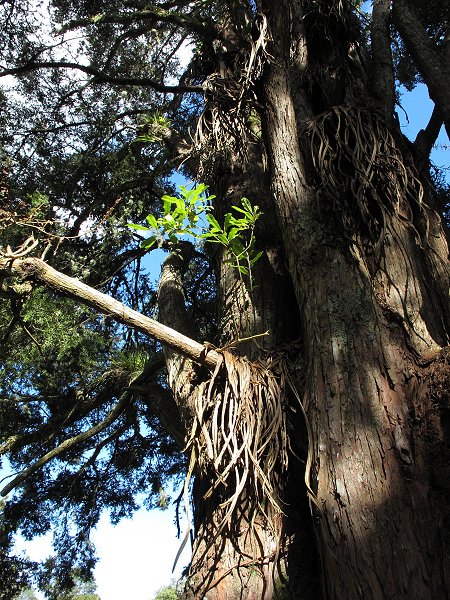 William came to see the new slasher and we walked up the road to have our first Orchard Planning Meeting, during which we walked around the Road Flat paddock, considering the best area for the first fruit-tree planting.

Our general idea is that anyone who would like to have some trees here may do so (which could mean you, dear reader), with a communal approach to the work and harvest of the orchard.  It's an idea still in formation, but we plan to get some trees in this season.

The sunlight fell on the leaves of this Rewarewa sapling, growing in the trunk of a large Totara tree by the stream by the bridge.  I hadn't noticed it before.  Rewarewa are not epiphytes, but seeds grow where they're dropped, if the conditions are good enough. 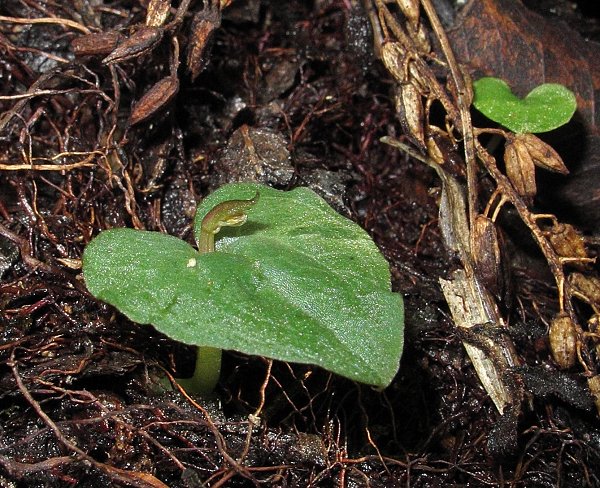 On our way back down the road, we had a look around the big Pine tree's felled trunk, where Stephan has set some pest traps and also where some of these orchids grow each winter.  The page from this week last year shows this plant already blooming, but it's a bit later in development this season.

My much-loved Godfather, Hack Matthews, died sometime around seven this morning in Kaitaia Hospital.  I last spoke with him eight days ago, on the evening of his 92nd birthday after Stephan had slipped a birthday card under his door when Hack wasn't at home (it turned out he was with the family for a birthday gathering) and Hack had rung to say he was sorry he'd missed us.  He sounded so tired and said he didn't feel well.  I hadn't heard about the last week's events which had led to his hospital stay.

Today I feel many things.  For several years I've been aware that every time I visited Hack, the number of opportunities for doing so was decreasing.  Of course that's true for anyone, but when your future potentially stretches for decades ahead, you don't start counting down; when someone's in their nineties, it is inevitable that there will be an end point within the relatively near future.

Last year we went to a funeral at which a number of people stood up and spoke to the coffin of the deceased, saying the sorts of things they'd not got around to saying before the person had died.  I decided I did not want to be one of those people when Hack eventually died, so resolved to tell him the things I needed to say.  It's always hard to do that in person without faltering in self-consciousness, so I wrote to him.  I subsequently received a card back from him, in a similar vein, which I will always treasure. 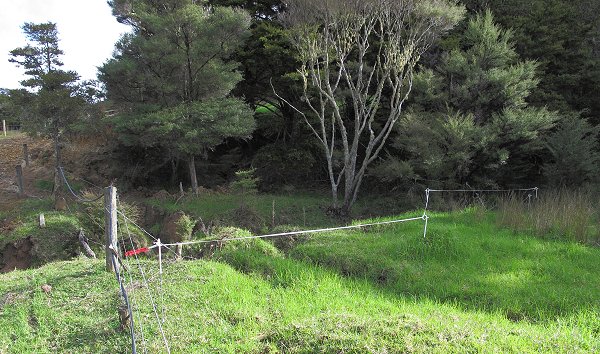 Feeling completely out of sorts, I went out to do what was necessary with the cattle.  The Small Hill Paddock hasn't been grazed for many weeks, since the earthworks were begun around the stream crossing and the entrance to the Bush Flat paddock.  Stephan created a silt-trap pond in the area the cows had turned into a boggy crossing and because we didn't manage to get that bit of riparian fencing completed before the winter, I knew we'd need to exclude the cattle from it with electric tape.

Once I'd done that, I let the four thin cows from the Pines Paddock in to graze the long grass.  Parts of the paddock have been hit by the frosts, but there's still more grass than anywhere else, at the moment. 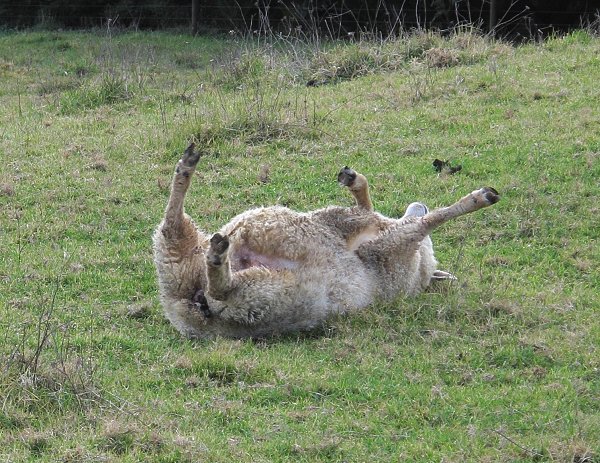 The Tag ewe is usually the sheep we have to rescue from this position, but this is her younger sister.  They're not in lamb and their wool isn't too long, so they must be getting too fat. 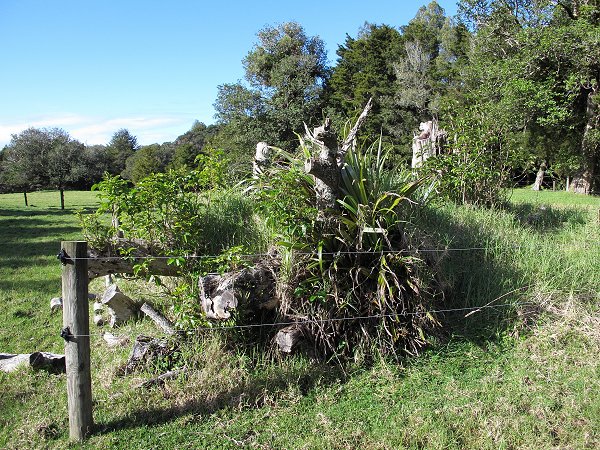 The regrowth on the Puriri branches we cut off the tree in the Bush Flat Paddock are looking healthy again.  I thought the drought had dealt to them.  They must have developed a root system to have lasted this long and in such obvious good health. 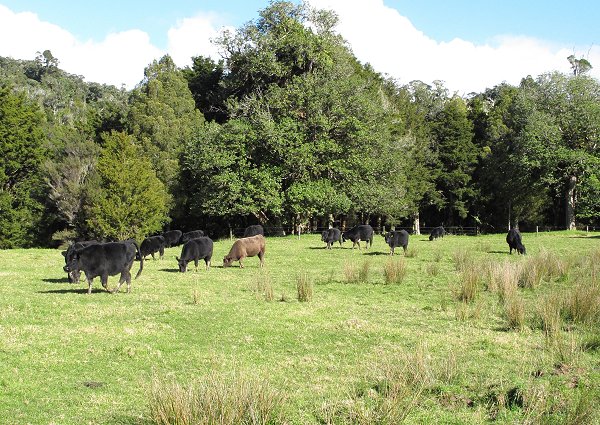 The Kikuyu grass in the Bush Flat has been affected by the frost, but not to quite the same extent as the open flats. 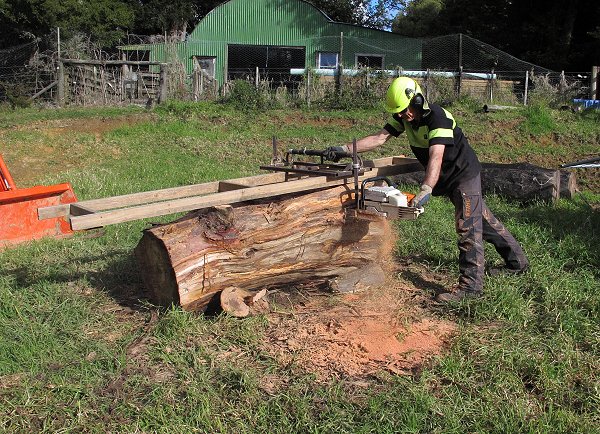 Roger Gale came this afternoon to help Stephan slab a few logs.  This is the Totara we had to cut out of the stream a couple of months ago. 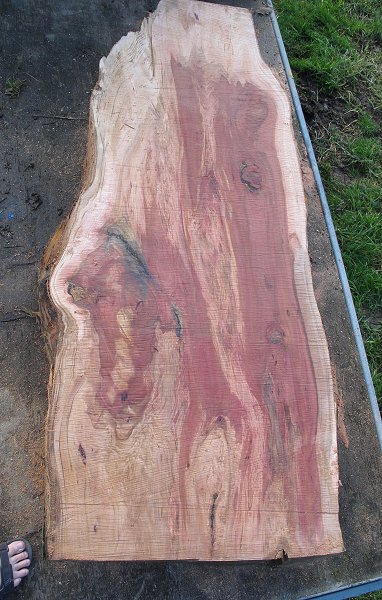 The grain in the wood is beautiful.  One day this might be the top of a coffee table! 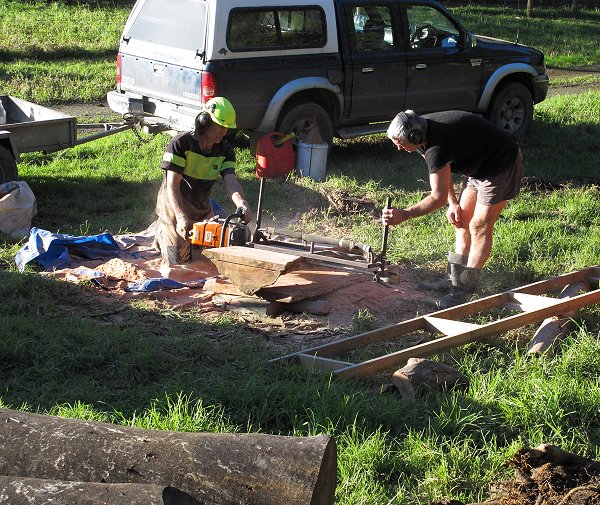 They cut the rest of the log into 50mm slabs (two inches thick) and stacked them in the shed for drying.

Then they cut up the two lengths of Silky Oak, from Jane's garden.

Funeral day.  I've been feeling overwhelmingly sad at all sorts of times during the week, but at the same time quite peaceful about this new state of the world.

I didn't feel much like socialising after the funeral, but a couple of really nice people talked to me about their connection with Marj and Hack and what they knew of me and my relationship with them from earlier times.  I find it oddly comforting to meet people who have known of me since childhood.  That sort of social connection would have been ordinary in times past and still is the norm within some cultures and communities, but these days in Western cultures, we're all so mobile and likely to live far from our families and places of origin.  My family of origin have all gone away from here, but those other connections still exist.

Twenty-four years ago today, we all went to St Matthew's-in-the-City in Auckland, for my Father's funeral.  What an odd coincidence. 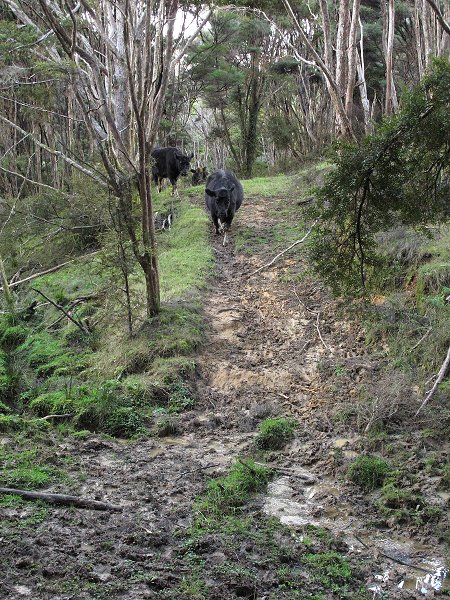 I went walking around the back of the farm, first leading the cows from the front corner of the PW, along Route 356 and up the hill to the Middle Back gateway.

Here they're about to cross the area in which steer 356 got stuck and for whom the track was named when it was created. 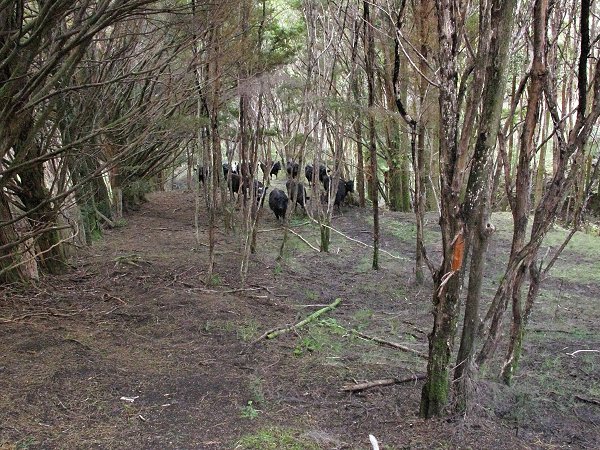 It usually takes a bit of calling to get the cows to follow me along the track and then up the hill, but fortunately they know where we're going and so they usually cooperate.  They all stopped for a breather half-way up the hill.  It occurred to me as I watched fat Curly 562 coming last up the hill, that they're not really particularly fit for quickly clambering up hillsides.  They're inclined to move much more slowly, eating as they go.

They're now ten to sixteen weeks away from calving, so the earliest are currently 6½ months pregnant.