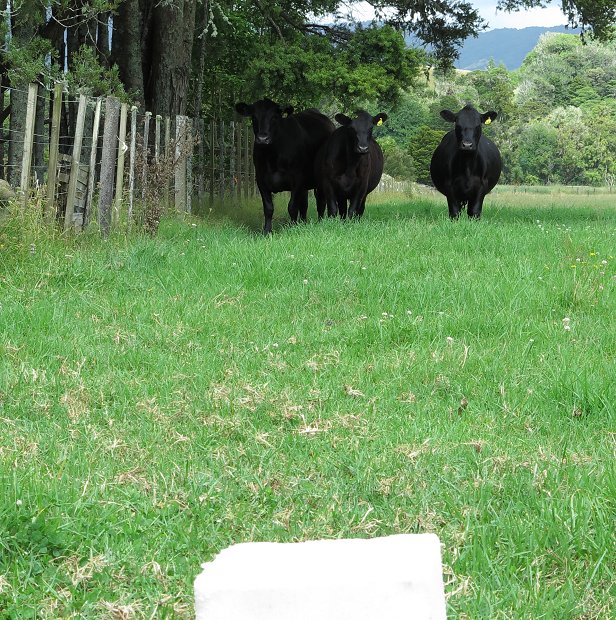 We bought some more salt blocks and took them out to all the cattle today.  Kikuyu, the predominant pasture grass at this time of year, doesn't take up much Sodium from the soil so the cattle need to have it provided like this.  We used to buy the pinkish "multi-mineral" blocks but all the other stuff in with the salt made them much softer than these straight salt blocks, which last longer when rain falls on them, which it inevitably does. 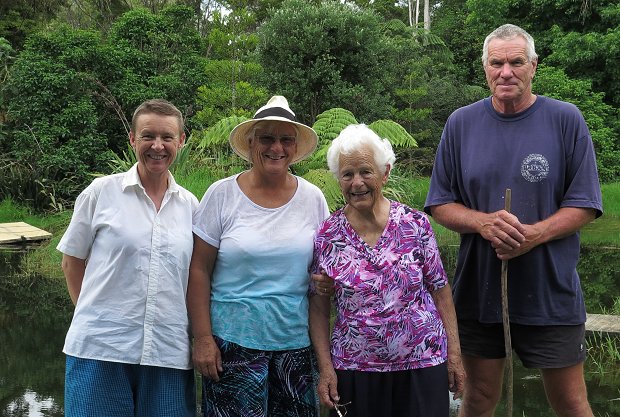 Lois, old friend of Ella's mum Michelle, appeared at the door this afternoon, having checked with Ella that we wouldn't mind if she just popped in (of course not).  Lois and her mother, Vera, are staying over at Mangonui and were out for a day's tiki-touring around and wanted to come here in particular because Vera's brother bought and lived on the ten acres next door when Stephan first sub-divided it from the farm. 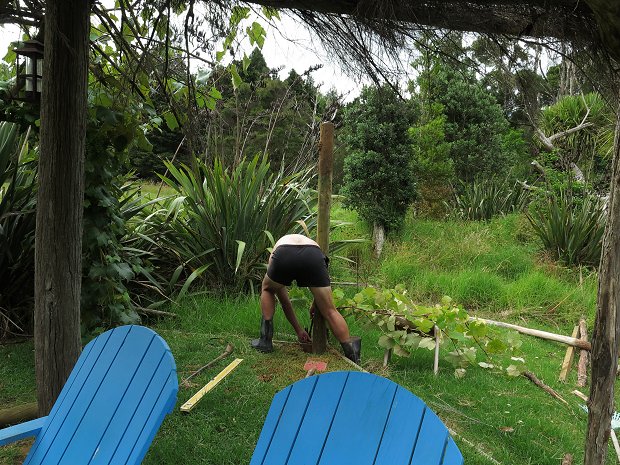 The gazebo by the pond has been progressively collapsing, the outer poles having been Kanuka.  Stephan began work today to replace most of them with treated poles which were formerly part of the chicken run up where the sheep and pigs now live.

The grape vine is getting on so nicely now that it needs a more permanent structure over which to grow. 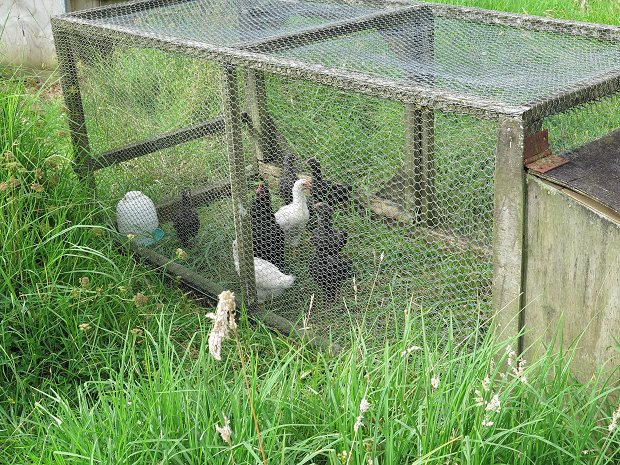 I moved the hen and chicks down to this more appropriate accommodation today, out of the bird aviary, so I could clean it out.  Once they're settled down here they can be let out in the afternoons, since they'll be further from the garden. 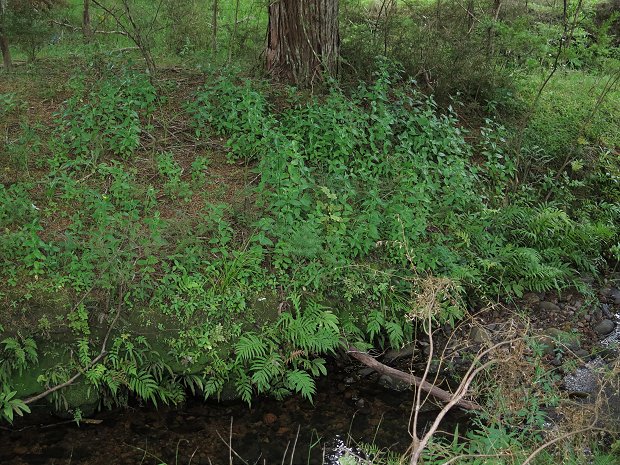 I looked at this stream bank in the new riparian reserve area between the Spring and Back Barn paddocks, noting the thick growth of little Hangehange plants (a shrub which grows to 3m tall).  Down the front of the farm, along the main stream which runs alongside Diggers Valley Road, there is no longer any such growth because some ecological vandal dumped Tradescantia out of their garden onto the river bank.  Now that grows everywhere along the stream in great thick carpets, blocking the light for any native tree seeds which would normally have grown. 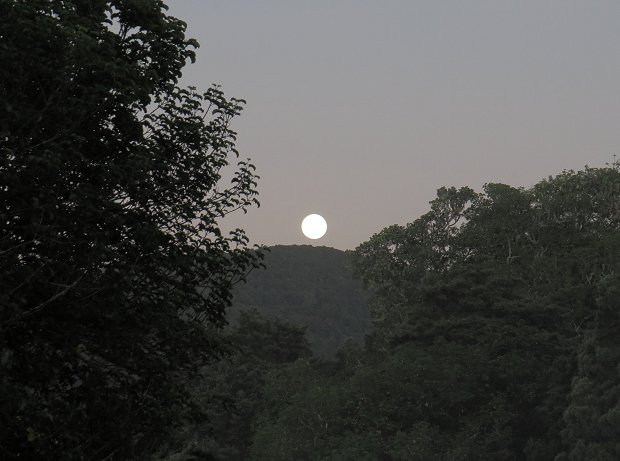 Early this morning the moon was setting over Puketutu, to the West.  Of course it moves around the sky during the year, but one doesn't notice until it appears somewhere one doesn't expect it to be: most of the time it sets over the hills much further South. 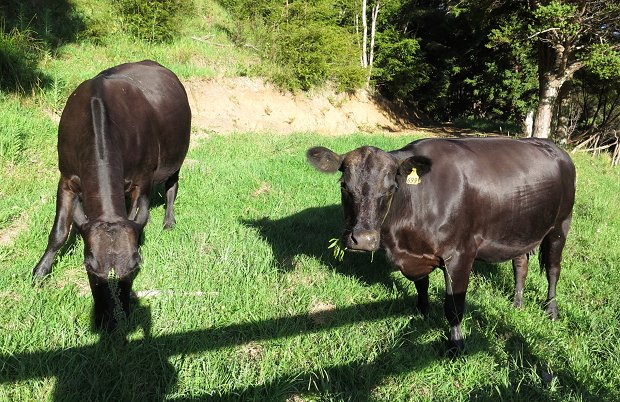 The twins came down the track together today in the PW, looking so shiny and healthy.  They're not always together but most of the time seem to be near each other. 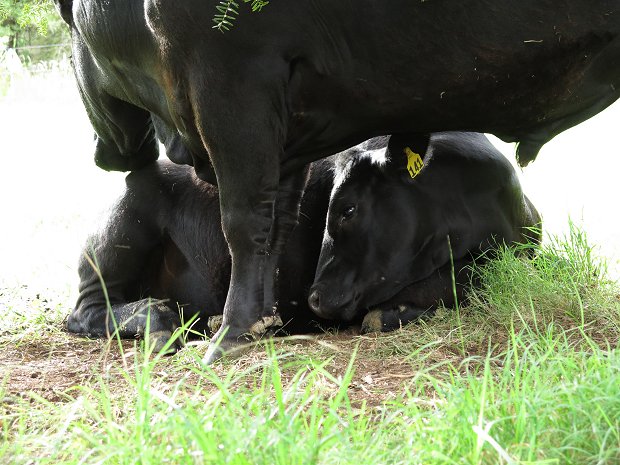 I have no idea what's going on with the heifers, having seen very little sign of any of them being on heat.  But this sort of thing looks interesting, the bull standing over a very submissive 141.  He looked quite interested in her when she stood up. 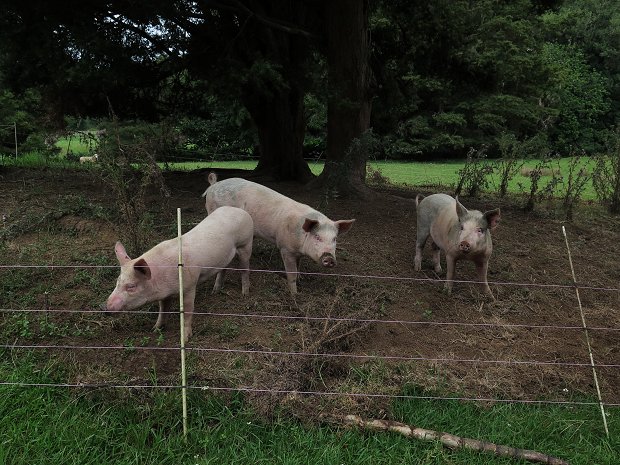 The pigs enjoy their larger run area under the big trees, although even on the hottest days we sometimes find them sleeping inside their little shed rather than here in the shade.

The inward-slanting electric twine fencing seems to be working well, keeping them in.

Nose clips are obviously a waste of time, the pigs having rooted up all the available ground.

I could have taken some brilliant photos this morning of a snorting, threatening bull 137, but was too intent on watching what he was doing and making sure I could get him out of the gateway and going in the right direction away from me.  His behaviour toward both of us has become a bit too challenging, so I decided it was time for him to go out of the cow mob and the cows can join bull 87 and his cows instead.

In the early evening we brought the heifers and bull 134 in to the yards and gave them a copper shot.  I wouldn't normally do that in the midst of mating but their cryptic heats make me wonder about their copper status - they did miss one injection at the end of last winter. 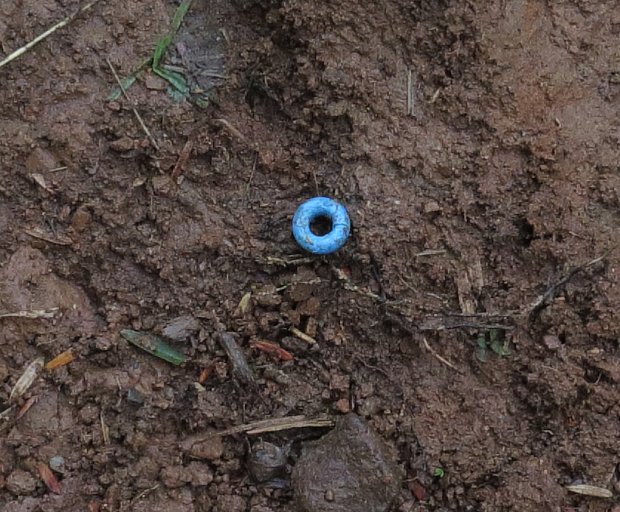 I presume this castration ring was caught in the hair above a calf's shrivelled scrotum and fell off as they all came through here and across the stream to the Spring paddock.  I've not found one on its own before because they're usually stuck to the top of the scrotum when it falls off. 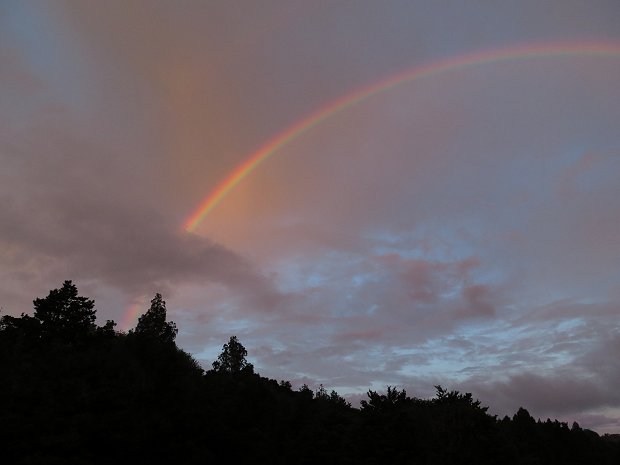 It rained again; surprise, surprise.  This month there have been more days on which we've measured some rain than not. 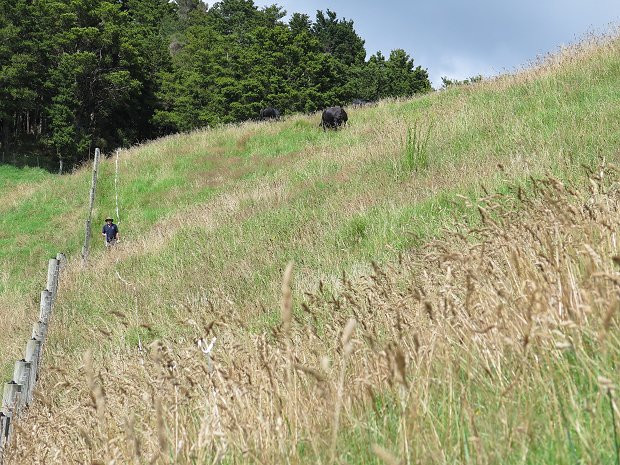 I checked with the neighbour that putting cows with a bull on our joint boundary would not worry him (his cows are already pregnant) and today we shifted 87 and his mob over the road.

We have two hot-wires along the boundary but I wanted to further reduce the chance of any contact with the neighbouring cattle.  BVD poses a significant risk to my cows and their unborn calves at this time of year.

Stephan tied the end of the electric tape to his belt and went off up the hill with a big bundle of standards.  We had to go back with a bit more tape and a few more standards afterwards; the ground is very uneven in places and it took some effort to get it right, on this blisteringly hot morning. 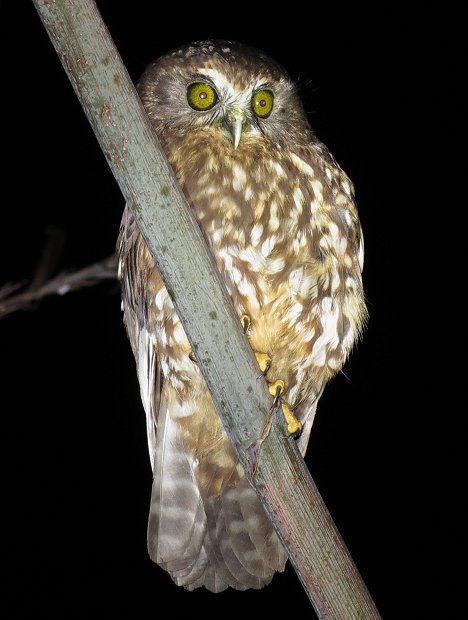 We had anticipated ground-based predators around the aviary but not airborne ones!

This beautiful bird spent some time silently flying around the aviary in the early hours, looking for a late supper.  The budgies were very frightened until I managed to chase the Morepork away.

I might have to consider curtains for the birds or, more practically, changing the position of one of the main sleeping perches so they can't be seen from outside. 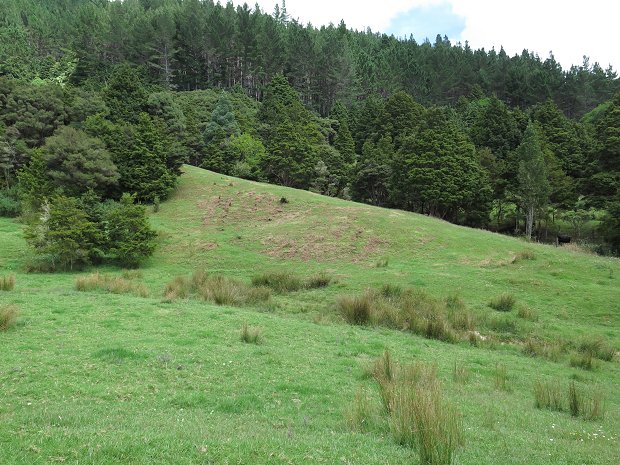 Stephan was given a heavy old slasher by a friend who no longer needs it and had been out to knock down the gorse and scrub in the Spring paddock, where I went today to check the smaller cow mob. 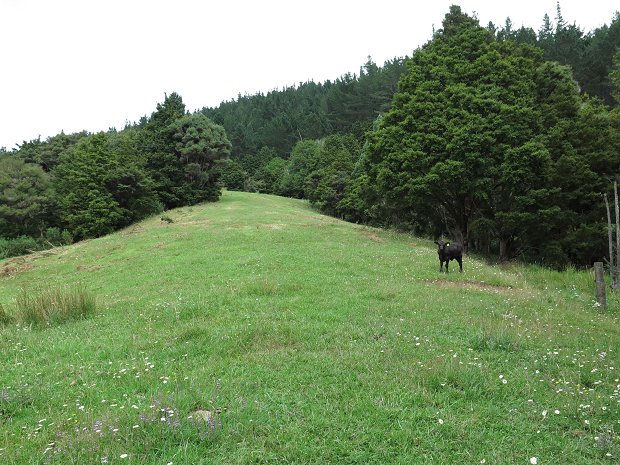 I then stood at the bottom of the slope in the picture above and looked up the hill, which was formerly covered in gorse as high as my shoulders.

This new-to-us implement is a bit more sturdy than our fabulous grass-mowing slasher, which Stephan didn't want to risk on a heavy job like this one. 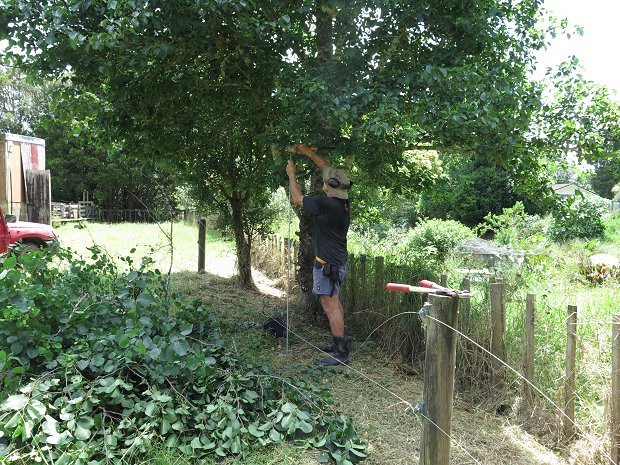 Today's task was something Stephan has meant to do for ages, as the power in the electric fence system has steadily dropped over the last few weeks.

He tested and then upgraded the earth peg array out the front - putting a new one in here to replace an inadequate, makeshift peg he'd installed years ago.

Once everything was working properly there, he started working outwards, looking for the fence faults which were draining the power from the system.