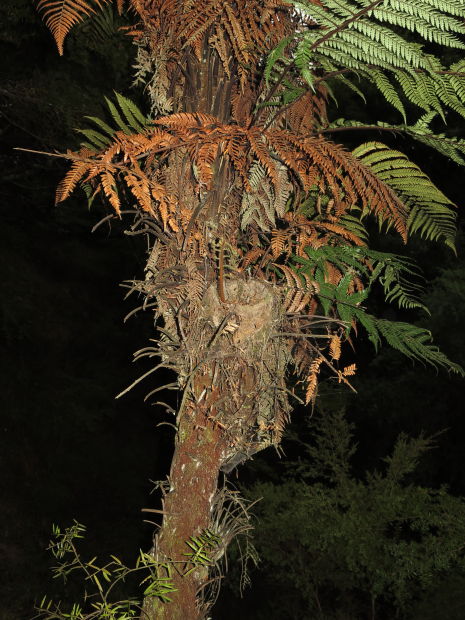 Walking along a steep bank Over the Road early this morning, I spotted this bird nest on a Ponga trunk.  It's not a very recently occupied one, I think, but still nicely intact.  I was not sure what sort of bird would build a nest using what looks like a lot of mud, but a simple internet search suggested probably a blackbird. 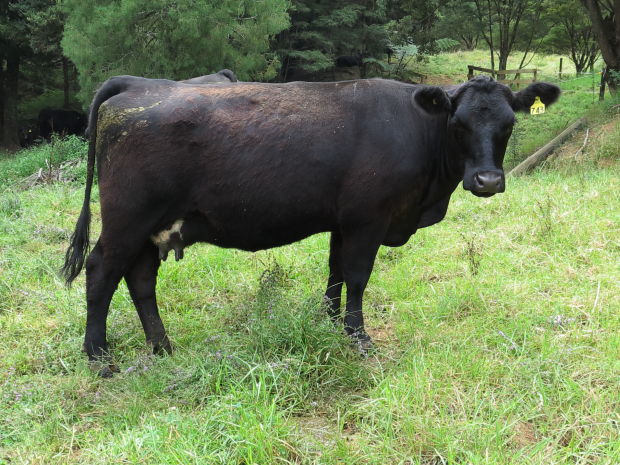 Two-year-old 743 (whose calf I had to help out after she'd laboured for several hours), is looking a bit thinner now than she did then.  Her calf's looking great, so she's probably making a lot of good milk. 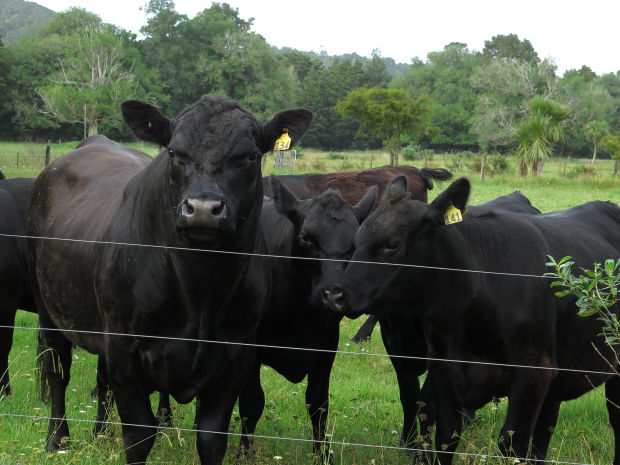 Bull 134 with an imposing attitude and seven yearling heifers on the other side of the fence outside the kitchen this morning.

Stephan and I spent an hour this afternoon setting up strings and pulleys on the two internal aviary doors, so I'll be able to open and close them from outside.  Until now the birds have been divided between the two flights unless I've been working in the aviary, because I had to leave the doors shut so I could get out and back in safely without anyone escaping.

The strings allow our cleverly-designed double-hinged door to be pulled shut across the work-room opening from the right-hand flight and the other to be opened in to the left-hand flight, so the birds have a corridor between the two areas.  When I want to go in, I can shut the birds in the two flights again and safely go in to the work-room.

This didn't all work perfectly to start with, there being a gap at the top of the right-hand door because its double hinge arrangement meant it didn't shut flat across the work-room doorway.  There were loose birds in there when I next approached and I had to be very careful about timing my entry when they weren't likely to fly out.  A wedge of plywood soon solved that problem.

This picture is of Precious, the lovely bird which nearly died a few weeks ago but has been completely fine since he recovered a healthy body weight.  He has gorgeous colouring. 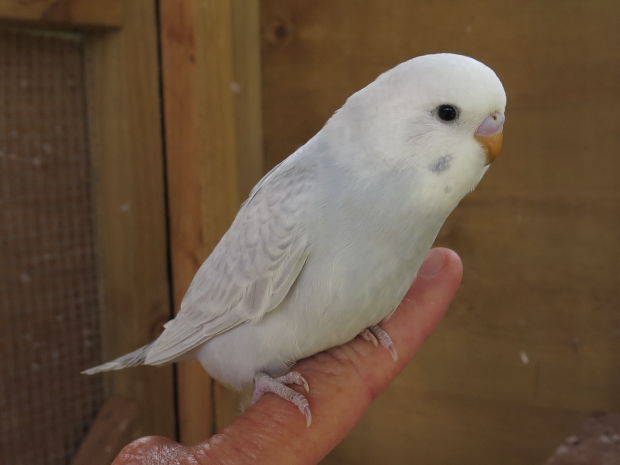 And this, a nearly colourless bird, is a stand-out amongst all the jewel-like greens and blues, with her gentle light-grey body feathers and delicately barred wings.  Her siblings are all quite ordinary looking yellow-headed birds with grey/green bodies.  When I know more about budgie colour genetics, I'll try and work out what this signifies about her parents.

(She may be he for all I know; I am not yet experienced enough to be able to tell so early without some of the most obvious indicators.) 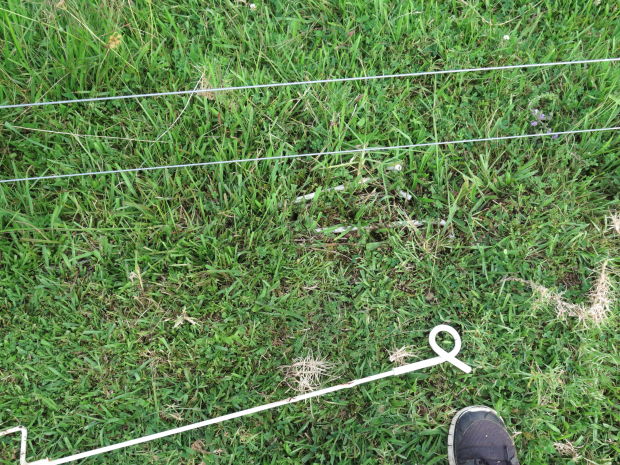 This is how fence standards get lost: lay them down somewhere and the grass grows through and over them until they're made invisible.  Sensibly I had left an upright marker standard with this lot and today went over to collect them.  We've used every other standard for the first bit of boundary over the road and need some more for the other part, before the cows can be moved. 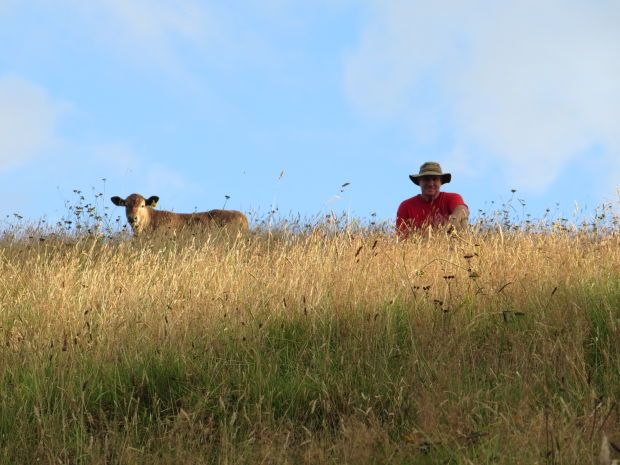 We carried all the standards we'd found up to the top boundary Over the Road and set out that bit of tape, then walked down to check on the cows on the other part of the hill.  Stephan sat down while I checked on the last few cows.

I'd had an incident with a wasp as I was riding the bike back from checking the other cows earlier in the evening, so was rather sore!  Stupid insect, could just have flown past, instead of sticking its nether region into my thigh just because the leg of my shorts flapped over it!  My painful reaction to stings takes days to subside, despite quick access to the antihistamine pills I carry in my camera bag. 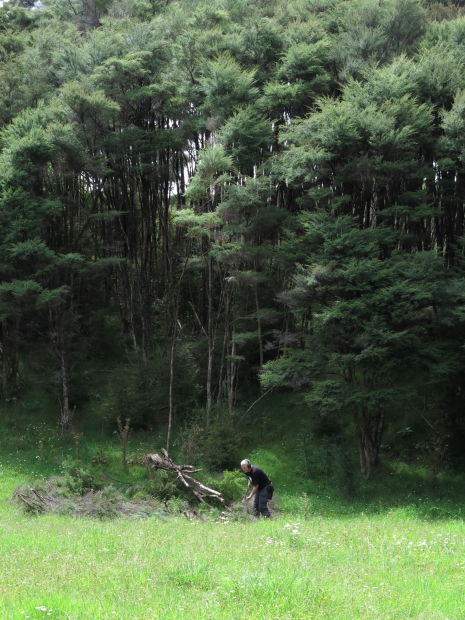 Then it rained, heavily, for two and a half hours: another 27.5mm. 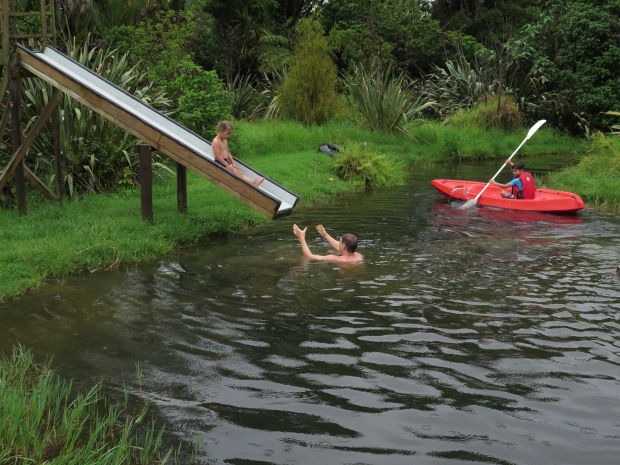 As previously arranged, but still in the rain, William and Elizabeth arrived with Simon and Anna, Sarah, Karl and the two boys, Kerehoma and Maihi.  A little while later, having driven up from Auckland, Dylan and Ryan (eldest son Mathew's sons) arrived.  Most of them got in the pond, even though it was still raining and they'd get wet. 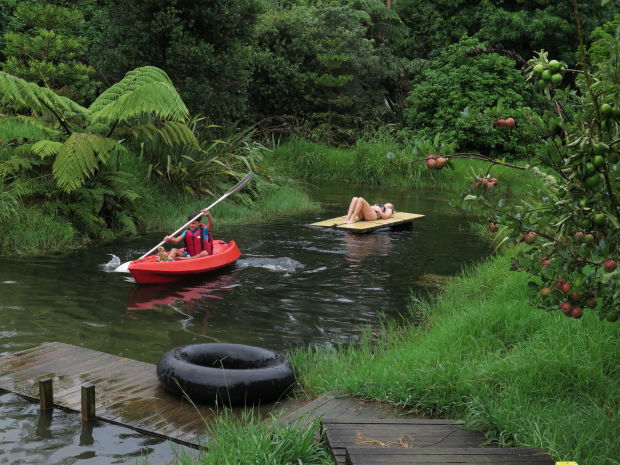 Kerehoma really likes towing the raft around; it's even better if there's someone on it. 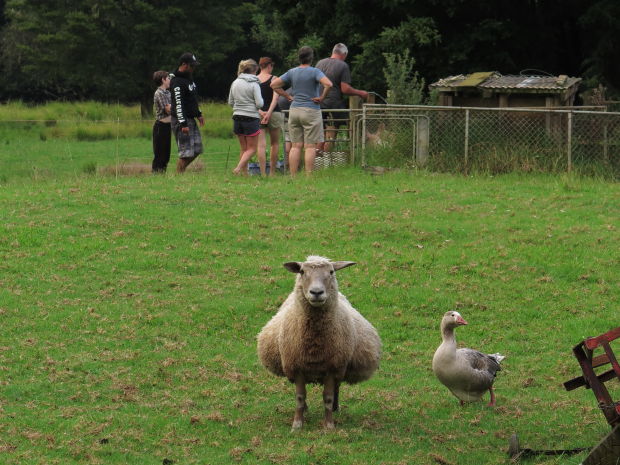 Then we all had a barbecue and a lovely evening.

And afterwards everyone went up to feed the pigs ... 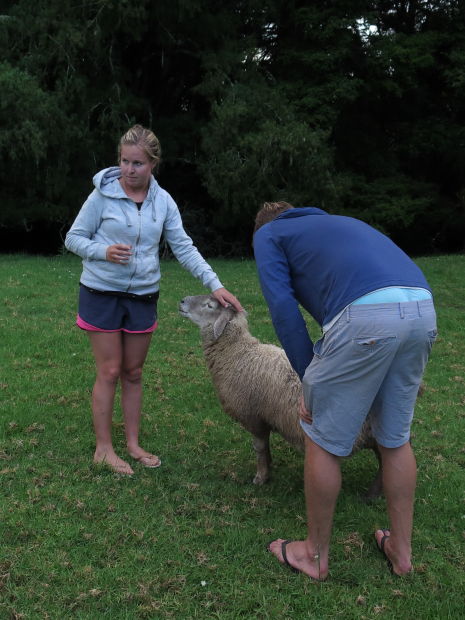 ... and, as usual, Dotty provided a lovely close encounter of the ovine kind, this time with Anna and Simon. 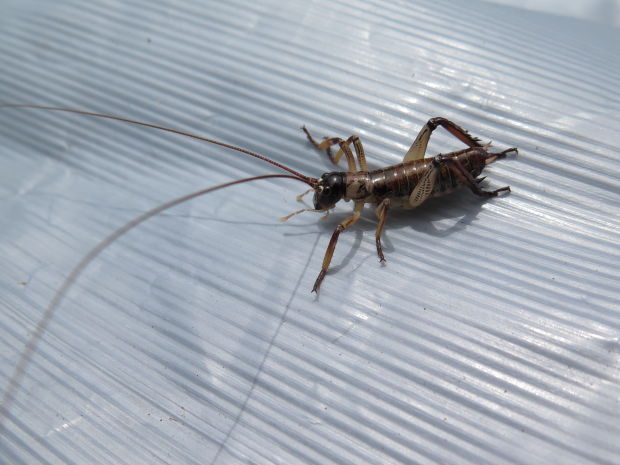 Stephan was folding a water-proof cover and called me to come and save him from this scary little Weta. 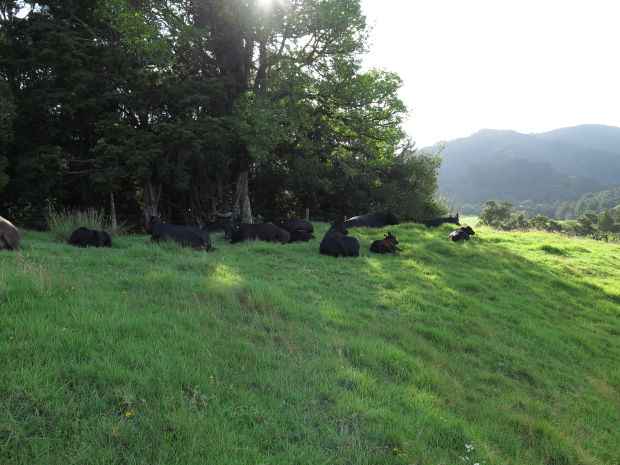 Late in the afternoon - early evening really, at about half past six - I found lots of the cows and bull 87 all sitting happily in the shade up on the hill Over the Road. 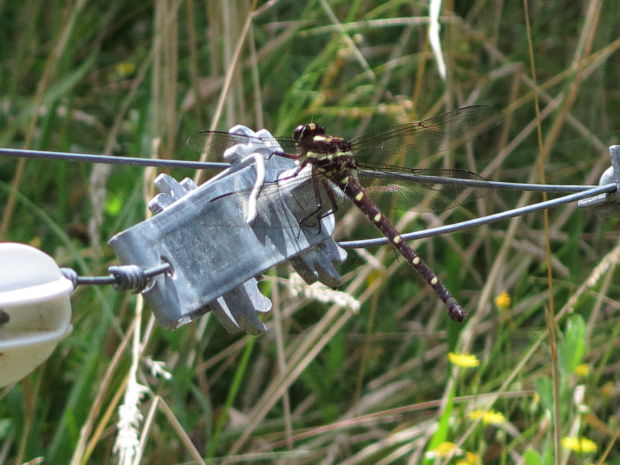 As I walked up from the stream and unhooked the gate into the Spring Paddock, I noticed a shadow on the ground beside me as this enormous insect flew past.

I don't think I've seen one since my first sighting in 2009. 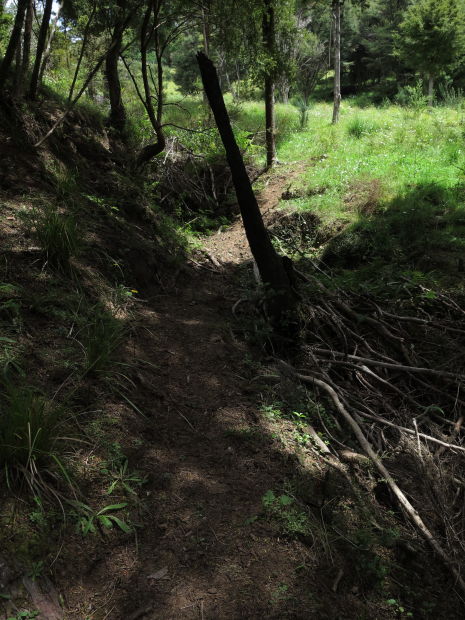 I took this picture in the Middle Back paddock.  A deep gully runs from the top left and down away to the bottom right and in most of it Stephan has piled the prunings of lots of trees.  That was supposed to keep the cattle from venturing too close to these steep places and falling in and getting stuck in the holes, although it hasn't always worked out that way.  But of interest here was the natural bridge between two deep channels, over which the cattle have formed a path they regularly walk from the grassy parts of the hillside to the lovely shade under the trees and the trough over by the PW fence behind me. 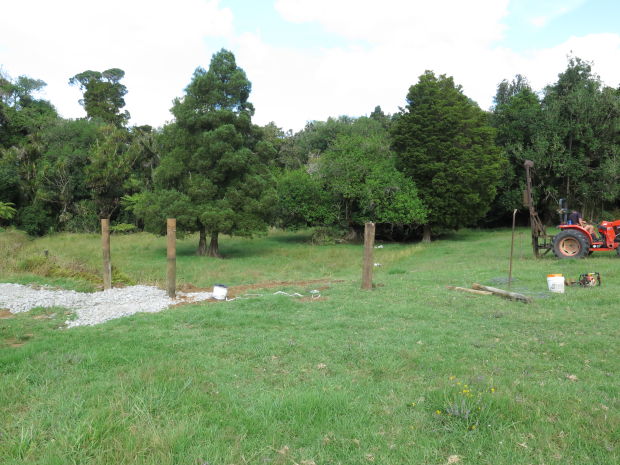 Back down on the flats, Stephan had carried on with his electric fence fault-finding mission which had by now turned into a 'replace whole sections of fence' project, which then naturally turned into a 'let's change things around' job.

The fence along the river-bank has long needed work and has only been left so long because it wasn't causing any bother in terms of keeping animals in; but keeping electricity from leaking out where trees have grown up through it was becoming an obvious and frustrating problem.

Here he'd taken out the fence which used to divide the bottom end of Flat 1 and 2 (you might see a line of grass running from the post on the right and a tree further back) and was in the process of replacing it with one which will run across the higher ground to the Flat 2 trough.  The change will make the little corner area of Flat 1 a bit larger and provide tractor access so it can be mowed, which will make it a better pasture area for the housecows, by which it is primarily used.
It will also change a little steep area which has caused problems particularly during calving: some of the cows like to tuck themselves away beside fences as they calve and the slope often led to calves bumbling down and through the electric fence, out of reach of their mothers.  I think this change will make that slightly less likely. 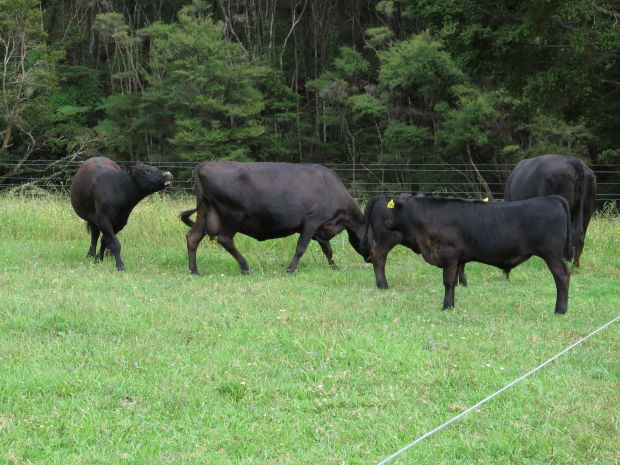 To my great disappointment Zella came back on heat.  This is not a three-week anniversary of her earlier heat, so I presume something happened to her first pregnancy and now she's ready to go again.  I walked the four of them out to where I could draft one of the young bulls out to be with her for the day.

I thought I'd done really well in getting her in calf before the rest of the herd but so much for that great plan.

I had noticed that her cream was very thin on the top of the last three mornings' milk and had assumed it was because of the heat (of the days, not of the cow).  Stephan said he had noticed nothing different in her behaviour, so this was a surprise.  I hope I've got her to the bull in time, since her oestrus behaviour is never terribly obvious. 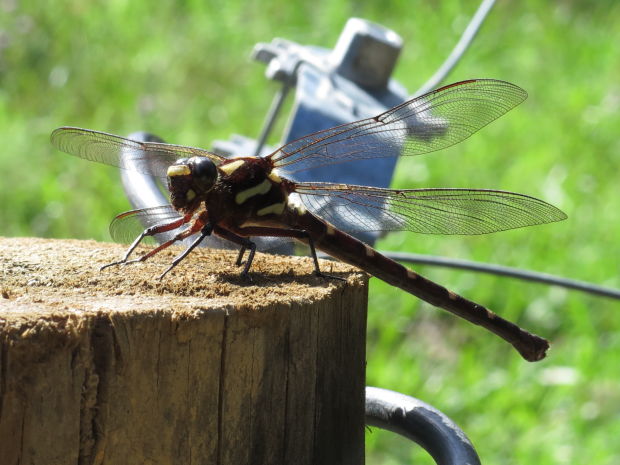 On my way out to check the Middle Back cows, I saw the huge dragonfly again, in the same place.  This time it allowed me to get really close for some lovely photos. 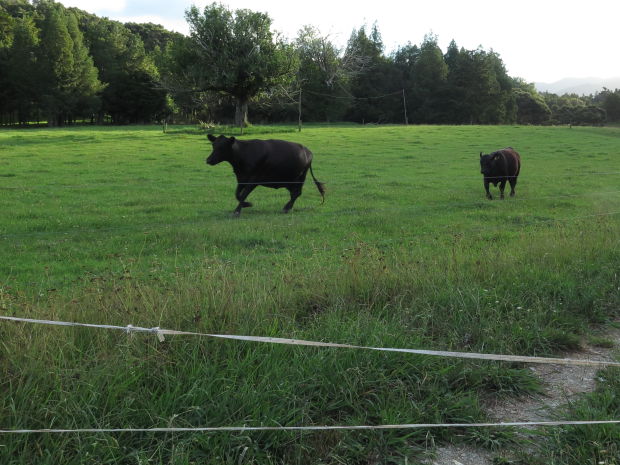 Stephan was still not back from trapping late in the day, so I got the cows in from their far-away paddock.  Little bull was doing the little bull herding thing but Zella doesn't take as much notice of that sort of nonsense as the others do and ran past him and away down the lane.

I've not tested it lately, but I suspect Zella would now assume the position of top cow in the herd if she was mixed in with the others.  Imagen scares all the others when she's near them and Zella bullies Imagen.

Computers were supposed to make our lives easier.  They don't; especially when they stop working properly.  Mine has been showing some signs of things not being entirely right for a little while but I put off doing anything to find out what was wrong because it kept on going.  Naturally I also thought I'd back everything up tomorrow ...

I'm not entirely careless about backing up data but when the computer wouldn't start at all this morning, I had to think when I'd last transferred my photographs off the hard drive and realised it was sometime back in November.  I've also spent hours and hours collating mating data and the prospect of having to do that all again left me feeling rather frustrated.

But I recalled a radio interview I'd heard a week or two ago with a technology commentator, who'd talked about his computer failure having been partly fixed by vaccuuming all the dust out of the fans which cooled his machine.  Since I'd arranged to take mine to someone to have it looked at, I thought I'd tidy it up inside before it went, then gave it one more try before pulling all the cables out ... and it went!  I spent the rest of the morning backing everything up onto external disks.

We had an appointment in Kerikeri in the afternoon so left it continuing to copy files and bought another disk while we were there.

The relief of being able to save so much information already thought lost, is a wonderful feeling.

Once I'd unloaded a whole lot of data the computer seemed to work a bit better again, so I delayed taking it in for repair; probably an unwise decision.

The housecows spend their nights with access to the driveway so they can come and be near their calves if they want to.  That means they sometimes wander past our bedroom window, usually quite quietly.  During the early hours of this morning I could hear hoof noise on the stones, sounding very like the bull was active with Zella.  She must have been only coming on heat the other day, not already on; it's good to know I didn't miss her heat, which I had thought possible the other day. 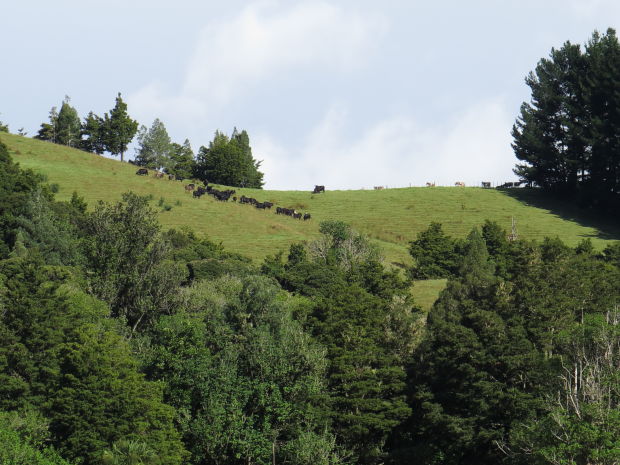 Rain fell all day, finally stopping at 5.30, when the sun came out and everything became very warm.  I think the cattle on the hill Over the Road were just standing catching some heat.

The sight of all those other-coloured cattle on the skyline made me glad we had put the electric tape along the boundary.