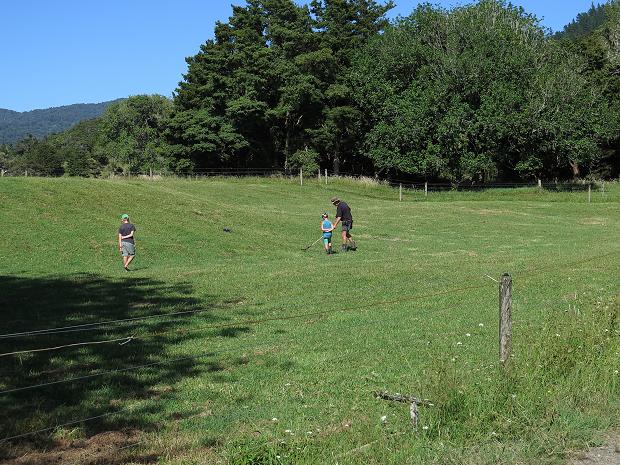 Stephan took the boys and the metal detector out to the paddock where he'd accidentally run the slasher over his knife, to look for the bits.  There must be some nasty sharp bits of metal there somewhere which won't be good for the cattle.

They found some and presume the rest was flung down through the grass thatch to the soil and will hopefully be safely trodden in.  Sometimes hope is all you have.

Eva, Endberly, Dexie 121 and 703 were all on heat today.  Mating has been going very well and this is the second day four cows have been on at the same time. 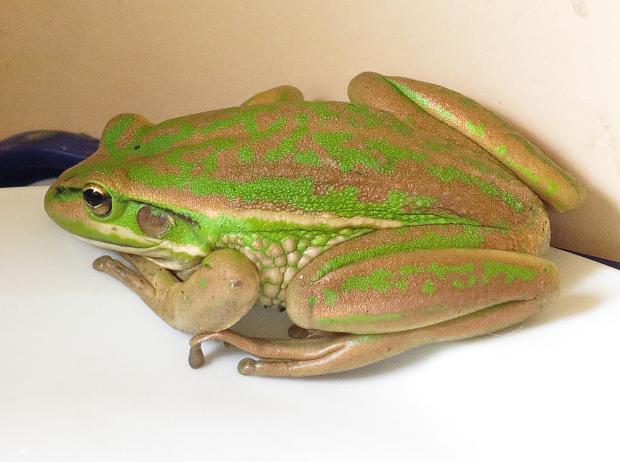 Doing the dishes early this morning, it took me a moment to register what I'd uncovered when I picked up a bowl: this large frog, sitting quietly on a plate.  Goodness knows how or why it was here.  I took it down to the pond and it swam away to the island.

I found another the following evening down the other end of the house.  Perhaps they're deserting the pond because of all the swimmers? 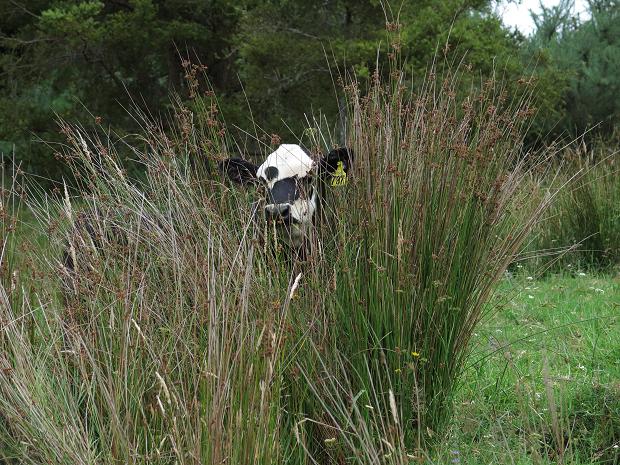 I couldn't see 787 in this clump of rushes, until she raised her head.  She was eating the bits of long grass growing amongst the rushes. 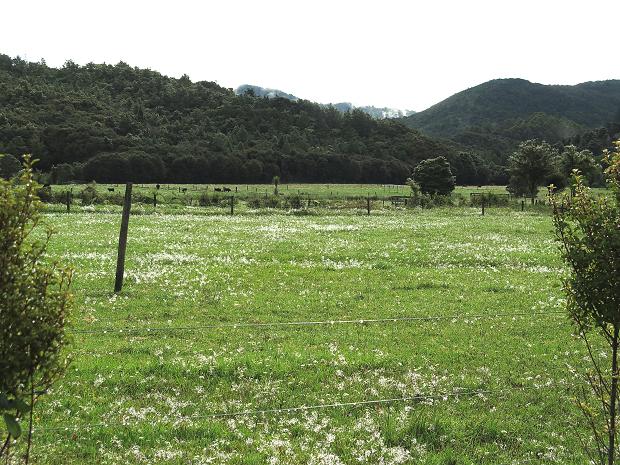 It rained again today, a good drop for the grass, another 24mm on top of 12mm yesterday.  This is the best sort of drought!  Drought, as part of the El Niño weather pattern, was predicted for this summer and caused some concern.  Fortunately it hasn't happened yet.

Stella and I went out in the ute in the rain, taking our umbrellas, to check the cows.  One of the streams was too high for our boots, so we took them off and waded through bare-foot.  We haven't been for many walks together this week, so I enjoyed that one.

I took the picture in the early evening sunshine because the rain caught in all the grass flowers looked so pretty across the flats. 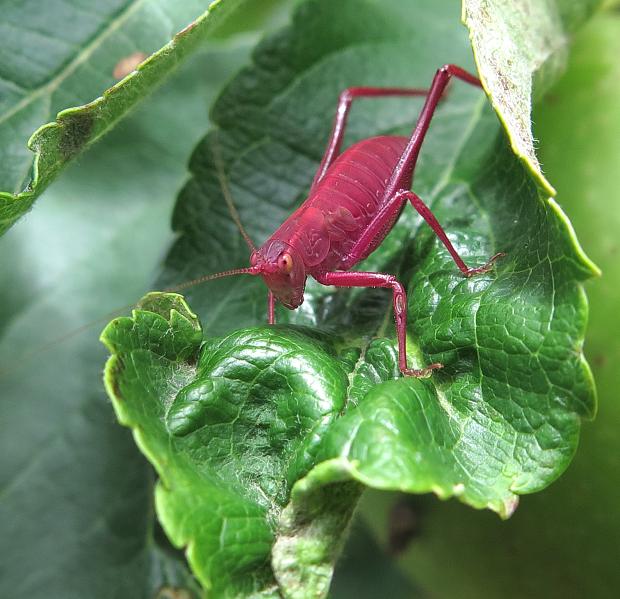 Our friends from the Czech Republic called in today and Veronika noticed this insect in the apple tree, a Katydid.  Red is very unusual, so I'm glad she drew my attention to it.

I think these two were examining strands of their own hair.  The microscope once belonged to Jill and it's a fun thing to use for explorations with the kids - and for finding invisible prickles in my fingers.

On the table in the left bottom corner of the picture is a bag of toffee Stella made yesterday.  I think they've had quite a fun time.

Then I packed Stella and Jasper and their gear into the ute and drove them down to the main road to meet Elizabeth and William, who had room for two on their trip to Auckland to return Maihi to his parents. 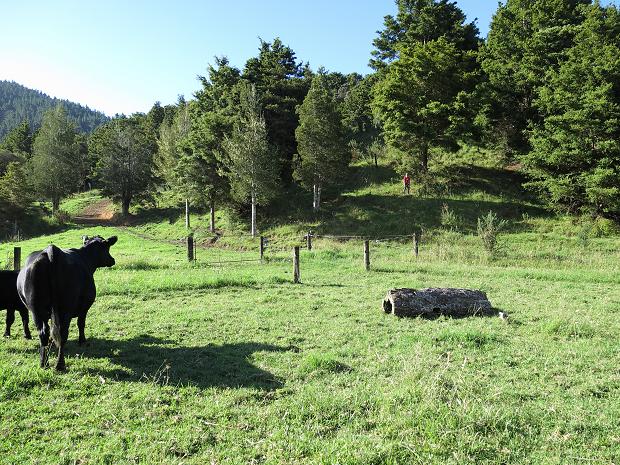 Later Louie and I went out to check and move one lot of cows.  It should have been a very easy move out of the Bush Flat and around the corner to the Big Back South, but some of the cows wouldn't come anywhere near Louie and I had to send him up the hill to sit quietly out of the way, then get him to walk further out of the way before a couple of them would go through the gate!  They're really funny about small people. 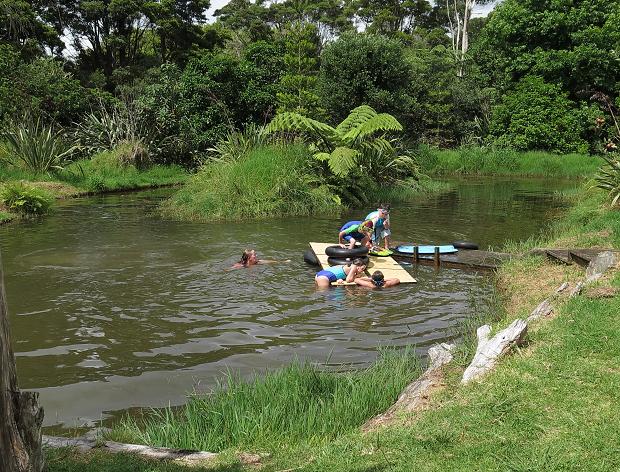 Up at 5.15 this morning and off to the airport to get Louie on the plane (oh how much negotiation it had taken to decide who was going to stay the extra night and fly home!) and then straight back home so Stephan could take the ute and go trapping.

Normally I'd have spent the whole day catching up with things and being quietly solitary; but Christina, Rebecca and friend Katrina had arranged to come out with seven children and spend the afternoon by the pond.  I wasn't expected to entertain or provide for them though, so wandered off occasionally to do my own thing. 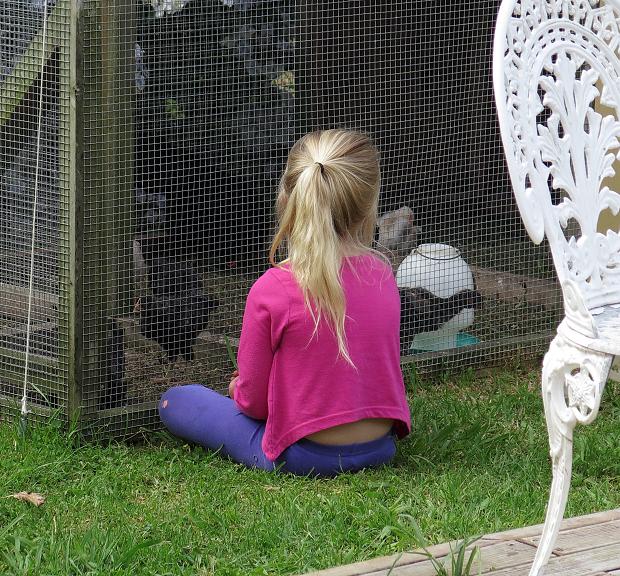 They enjoyed several visits to the budgies during the afternoon.
This child sat for ages, quietly watching the chicks in the old aviary cage on the lawn. 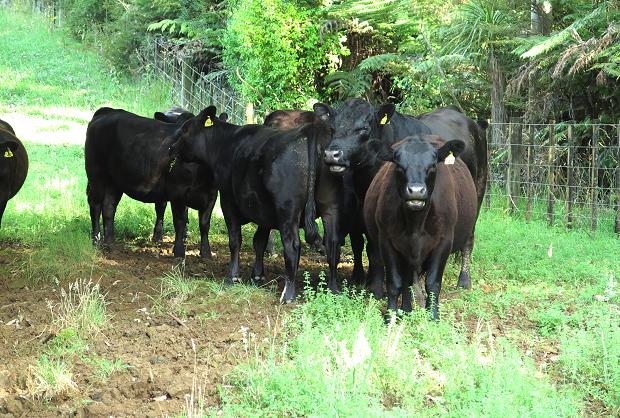 I had the yearlings near the house for many days at the start of mating and thought I saw a bit of activity between some of them and the bull but nothing definitive.  I don't know what's going on with them.  Normally heifers are really obviously on heat when they are but something is not quite right this year.  There's nothing obvious and they're all nicely grown and healthy, I think.  I might have to get them pregnancy tested later to see if they were just very secretive.

Standing stroking cows this evening I managed to scratch Emergency's daughter 150 and discovered she has a kinked tail!  Somebody must have trodden on it.  Her paternal grandmother, Imagen, has a similar kink which I blamed on her mother Ivy, who had earlier broken elder sister Ida's tail.  I think Ivy had a habit of standing on her daughters. 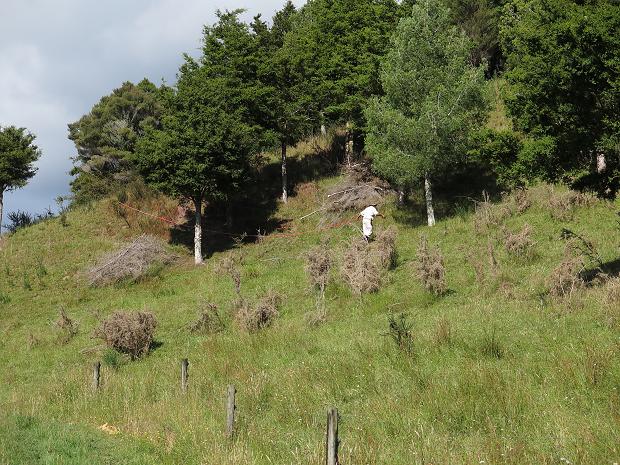 Stephan is determined to spray all the gorse this year.  Most of the farm has missed being sprayed for the last couple of years (Stephan lying around with his injured toe one year and last year, the enormous riparian fencing job took nearly all his time).  This face was done last year and was easier work than where the regrowth has had the two years to get really thick. 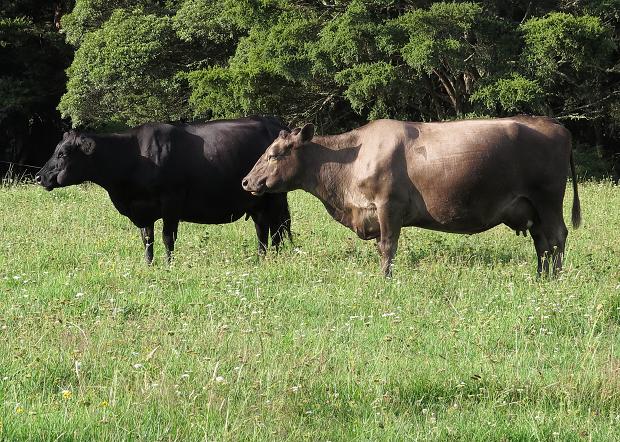 I saw these two standing in the Windmill Paddock when I rode out to check the other mobs.  Half an hour later I returned and found them in exactly the same position in the sunshine, standing dozing while chewing their cud.