From the window when I got up this morning, I could see the cows gathered oddly in Flat 2.  I walked over to see what they were looking at and found that a hawk had been dismembering a rabbit and cattle don't like hawks very much.  Such a small bird of prey wouldn't threaten a live animal in ordinary circumstances but presumably could cause bother to one which was unable to move away.  I once had to shoo one away from a calving heifer, when it sat within a few feet of the animal as she was taking a while to push her calf out.  I could imagine it taking advantage of the heifer's inability to move quickly, potentially snacking on some part of the new calf while it couldn't get away.

Stephan noticed something entirely different from the window: our first budgie, Eco, lying motionless on the floor of the aviary, probably not sleeping.  I had looked at him yesterday and he showed no obvious sign of ill health, so this comes as a sad surprise.  Eco arrived in March 2012 and was the beginning of my keeping birds.  He was never tame, just the first.  He will be buried next to Murphy, under the apple tree by the pond. 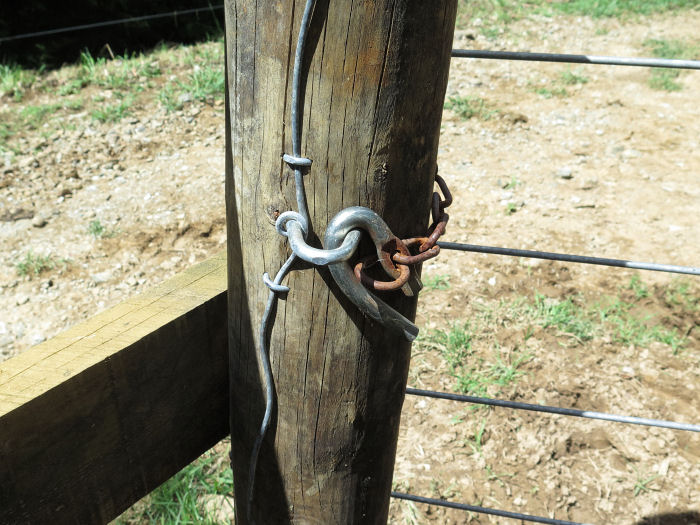 This is the latch of the new Route 356 steel gate.  Everything about this gateway was shocking: the gate and the staple.  The electric fence cable runs under the gate and the induced voltage in the gate made touching it an extremely uncomfortable experience - for Stephan; fortunately for me, he felt it first and I remembered not to touch it until he came back and installed No.8 wires to the ground, everywhere he could still detect voltage. 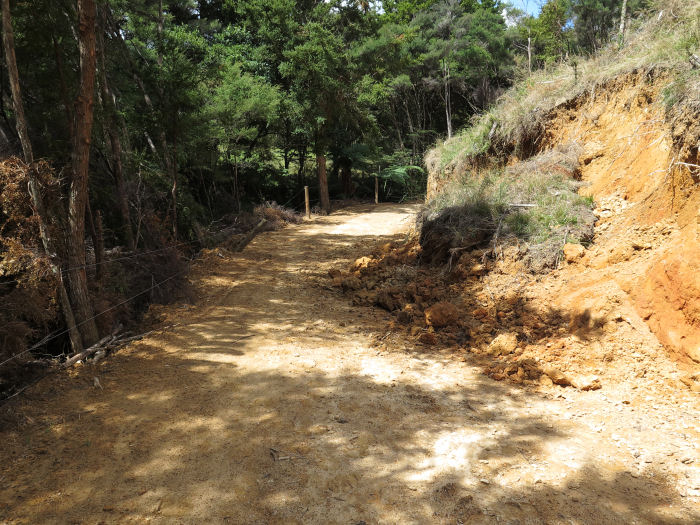 Route 356, despite all the rain and the cattle walking on it, is in remarkably good condition, testament to the great work Stephan has done on it.  Except for this slip and the washout on the edge, which has taken down one of the new fence posts - and another further along, in a similar bit of reclaimed edge. 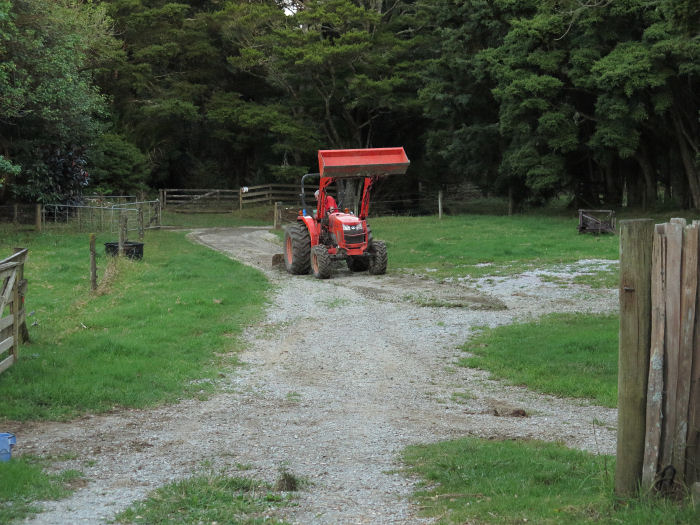 Much of our driveway metal had been washed toward the bridge, with a big mound down by the gate.  At the end of the day Stephan dragged it back up the drive with the back blade.

The flies were numerous tonight when I went out to check the insemination mob.  This usually happens at some time during the summer and is worst after rain.  Horrible, buzzy, slow-flying things are attracted to my light and while I hold the torch under one arm to write in my notebook, they fly inside my shirt and then buzz about against my skin, trying to get back out.  I discovered the quickest way to stop that is to shine the torch down my shirt front and they fly straight out again.

All around the farm the growth of the Kikuyu grass is evident after the rain.  What a relief.  The weather is perfect for it: hot and humid. 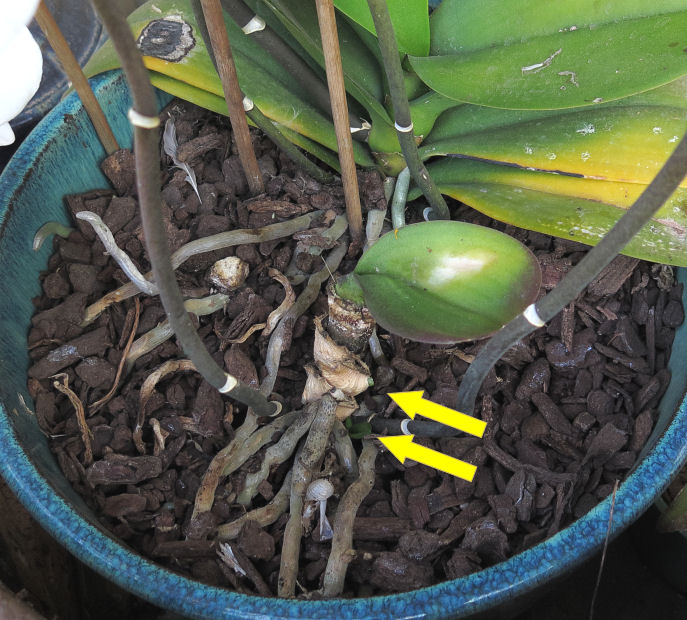 The beautiful Moth Orchid plants Jude gave me for my birthday the year before last, have continued flowering almost without a break.  I moved the big, heavy pot out onto the front deck for more light and warmth back in the spring but in recent weeks the front plant's leaves have yellowed and then fallen off, while the back plant has remained quite healthy-looking.  I'd tried shading the leaves which seemed to make little difference but last week it occurred to me that it was the hot sun hitting the dark-coloured ceramic pot which might be the problem: the roots were getting too hot on this side.

I found some unused bricks in the garden and stacked them around the front of the pot, which now shades the pot but not the plant.

I knew I'd not left it too late because of the new little shoot growing amongst the roots (bottom arrow) and over the last few days I've been watching the emergence of another shoot on the side of the stem.

Cousin Christina later said she'd suggested the shade, a comment of which I have no memory at all, thinking this was entirely my own brilliant idea.  Funny how one can hear things and not register them at the time. 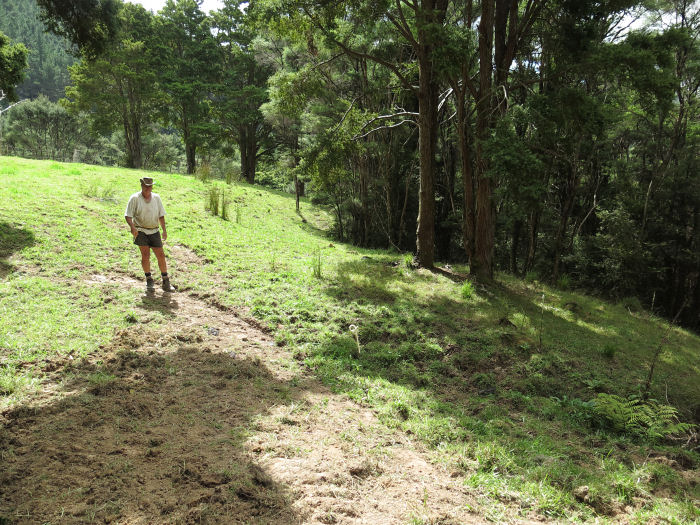 Now that Route 356 is formed and fenced on the lower side, work begins on the fencing which will eventually divide the PW in new ways.

At the top of the hill is an open grassy area; the PW reserve, with its lovely stand of trees is to the left of this picture; the Middle Back is directly ahead - a big strainer and three trees behind Stephan mark its boundary.  We're going to remove that old fence between the two paddocks and the new Middle Back/PW boundary will begin over here (the white pig-tail standard marks where the top strainer will go), with a gateway up here between the two paddocks and another at the bottom onto the new track. 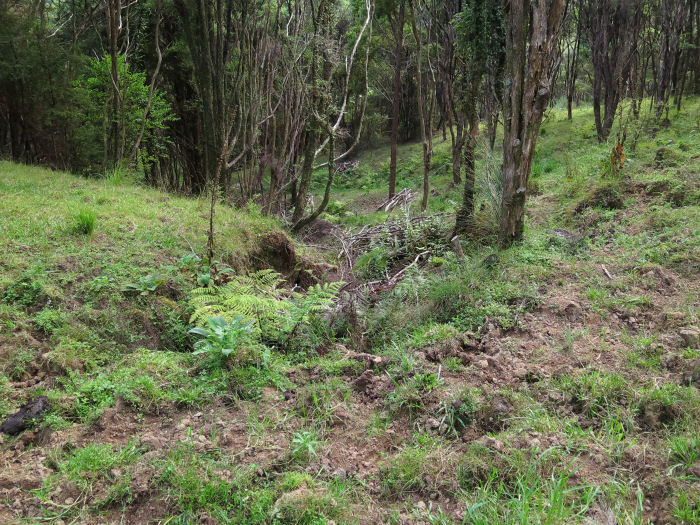 Turning immediately to my right from above, is the original hole into which a steer fell, rescued by Muriel and Stephan nearly 40 years ago and for which the paddock was named.  That whole gully will be fenced, so nobody else can fall into it ever again!

It's tricky, steep country and while Stephan has already done a lot of clearing, there's much more to be done, although the rest can happen after the fences are in.  There's some lovely firewood in there. 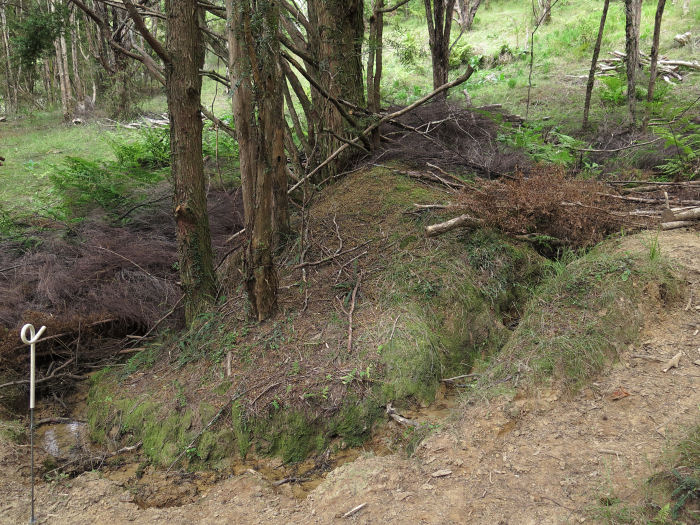 This is about 20 metres down the hillside, where there's always been a bit of a pool just to the right of the picture.  The constantly running water used to flow around the other side of these trees but has recently cut a path around this way, as the largest Totara in the group has grown and blocked that earlier channel.  It's hard to tell where the water originally emerges from the ground but we presume it's in the big hole at the top, which is what caused it to form.  It then runs underground again until coming up in the little pool and then flows down the steep gully to the bottom of the hill. 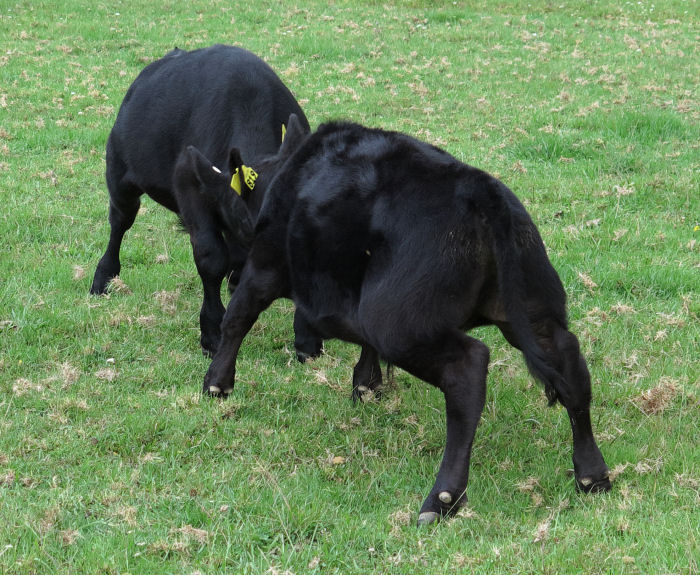 I took big bull 87 away from his two cows this evening and sent them and their sons quietly into the big mob.  There was very little aggression evident between cows, fortunately.  Some of the calves were a different story, taking on their new paddock mates in some serious-looking tussles. 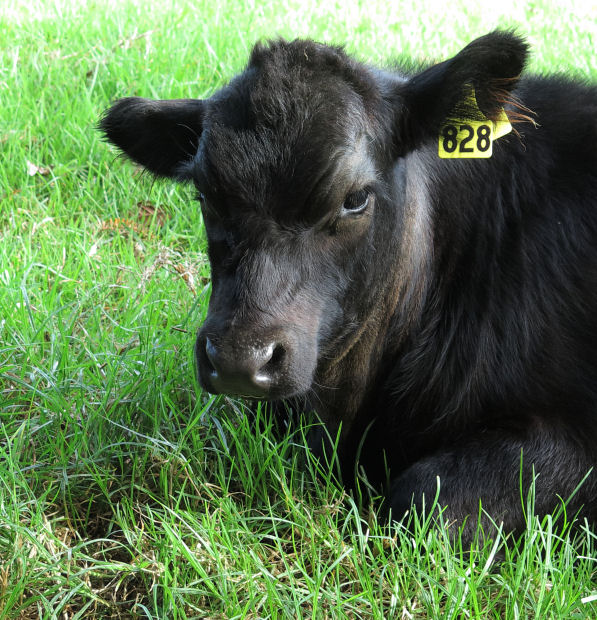 Something wasn't right about 828 this morning, Endberly's son.  I didn't notice him particularly last night during my 10pm check, other than recalling that he was sitting near his mother at the other end of the paddock, so presumably alright then.

Normally a sick calf will have both ears low but this calf's right ear was definitely lower than his left, which looked pretty normal.  I watched him for a while, eventually decided to make him stand up, to make sure he could.  His normal bodily functions appeared to be working as they should, so I left him standing quietly in the shade.  He seems quite miserable. 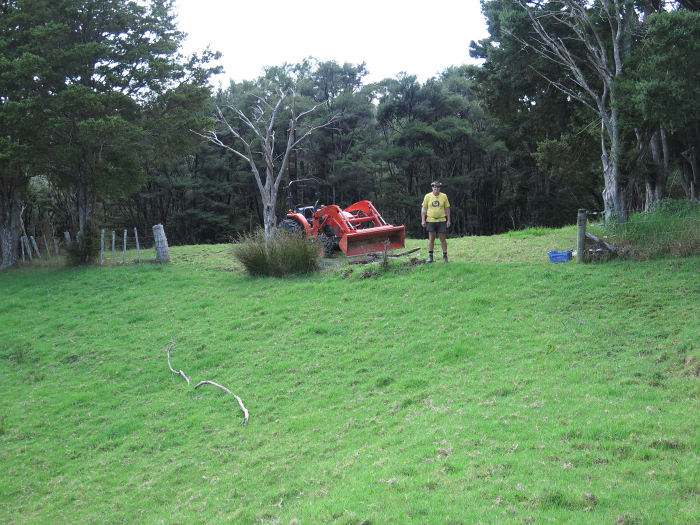 Well there was a fence and a replacement tape gate here between the PW and the Middle Back.  Now there isn't.

Stephan wanted to use the relatively new strainer post from this former gateway for the new fence between the two paddocks. 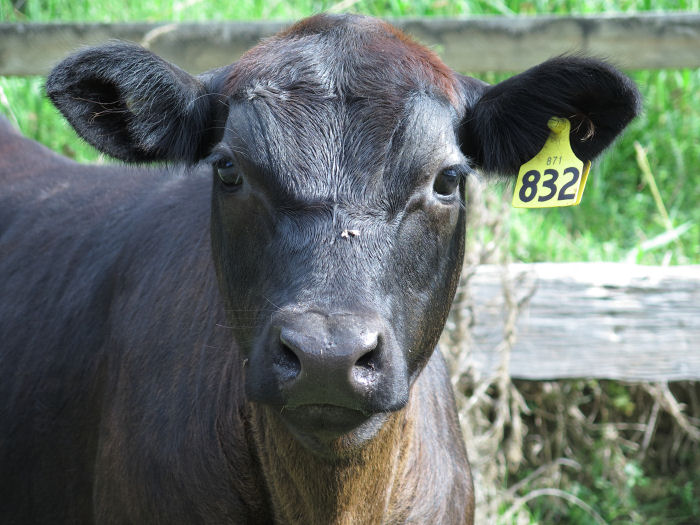 Zella's calf, with flies crawling around on his nose, which was what prompted me to take the picture.  The flies are awful this summer.

Stephan tells me he calls this one Zob, Zella's other boy.  He's growing fast, spends half his life sitting around, which I suspect is because so much of his nutritional requirement is satisfied by Zella's ample milk supply and the rest of the time he hares around like a loon. 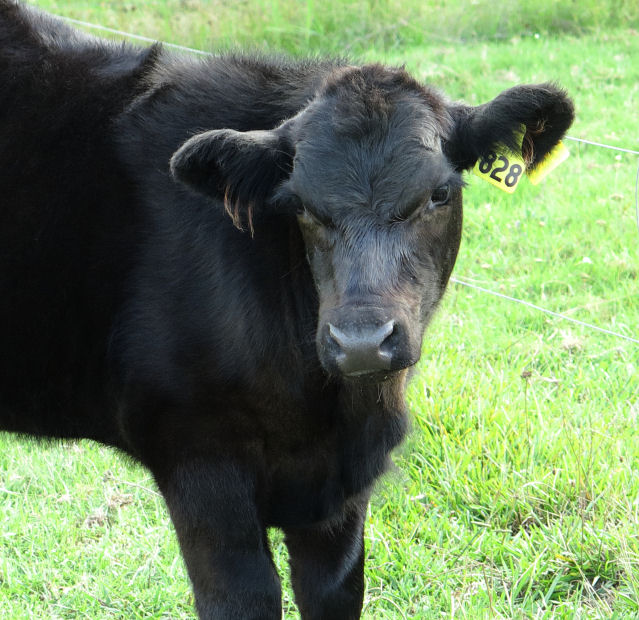 By the end of the day 828 was moving around a bit more than this morning, eating grass again but still looking quite off-colour.

At night I noticed that while everyone else was sitting comfortably chewing their cud, he was entirely still.  I have begun to think that his illness isn't some gastric problem or other infection but that he's received a nasty knock to the head.  He behaves as if he has a horrible headache and would just like to sit quietly until it goes away. 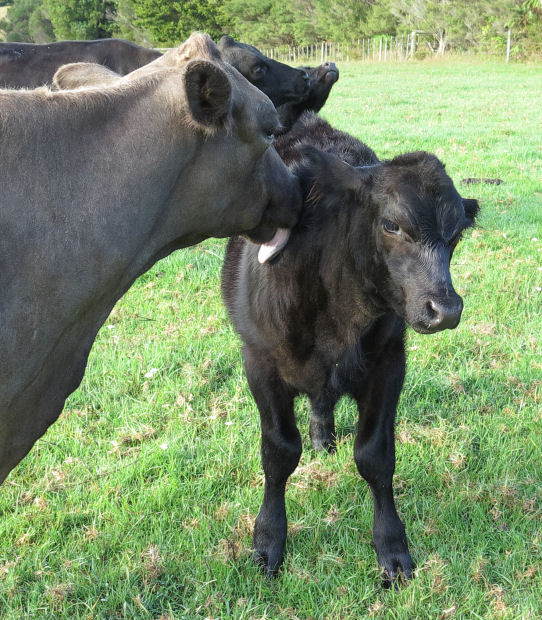 828, still looking a bit down but enjoying a morning lick from his mother.

I haven't seen him feeding but he obviously has been - the hair on his nose is all shiny.  Endberly's udder had obviously been suckled yesterday when I checked, too.

Mums licking their offspring seemed to be the thing, this morning. 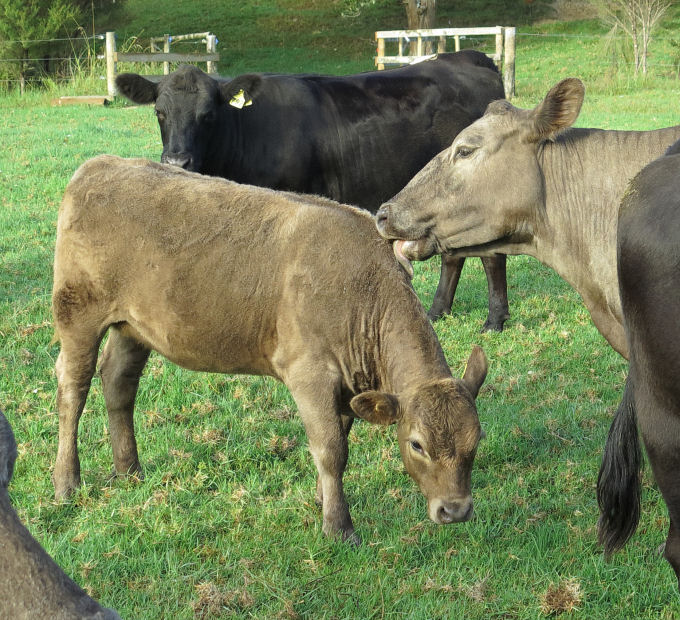 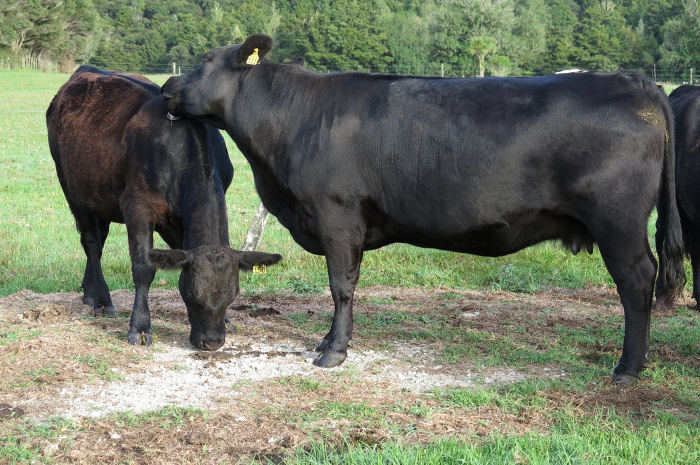 Emergency was having a lovely moment with yearling daughter 150. 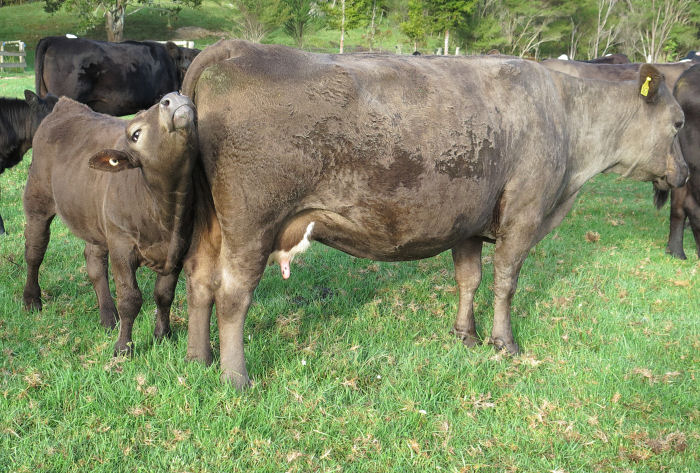 812 and Curly broke the pattern: 812 using her mother as a scratching post again. 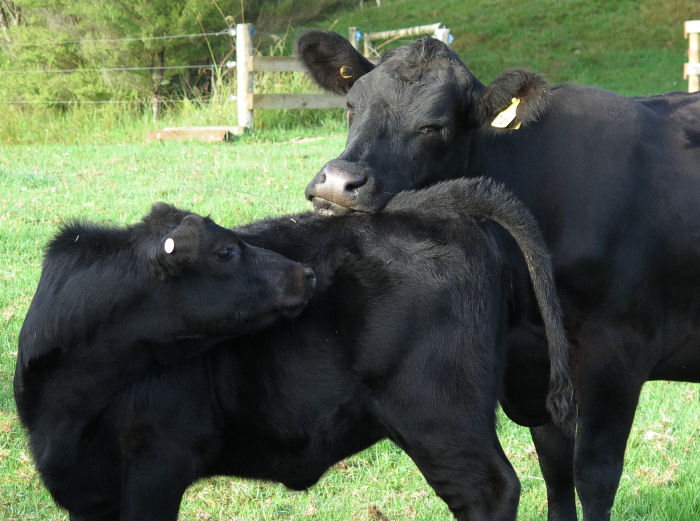 And 743 seemed to have gone to sleep while resting her chin on the back of daughter 823.

Yesterday there was a pair of Putangitangi on the flats with one lone female.  This morning there were two pairs and three females.  They rarely gather here in large numbers but we seem to be some sort of meeting point for some of them as they drift back from the annual moult. 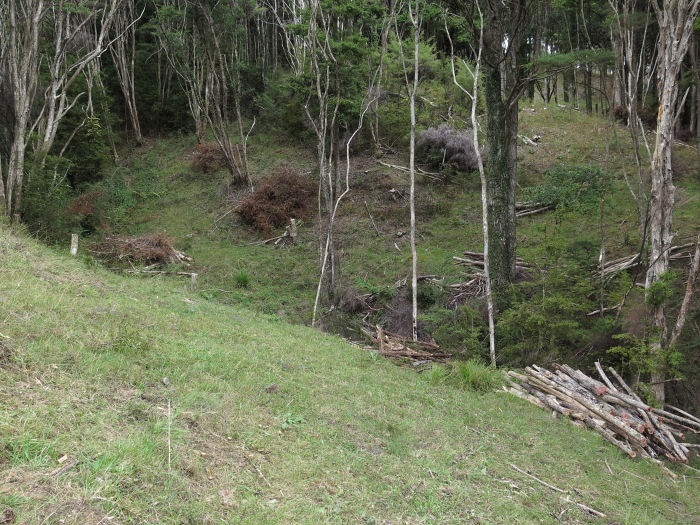 This is near the end of Route 356, looking up and to the left of where 356 got stuck in the main gully down to the right.  (That big gully runs down behind the next ridge at the right of this picture.)  The slope in the middle distance has quite a bit of clear, grassy area up the hill and the cattle tend to come down here browsing.  We could fence down the main gully and around and up this one but it would create a place where animals who were unfamiliar with the new layout would end up being stuck and I'd have to do a lot of chasing about - forever, because the calves would not always know to go up the hill to get out of here either.  So we will install a culvert, providing a way out for the animals, which should fit in well with their natural ways of moving around the paddock. 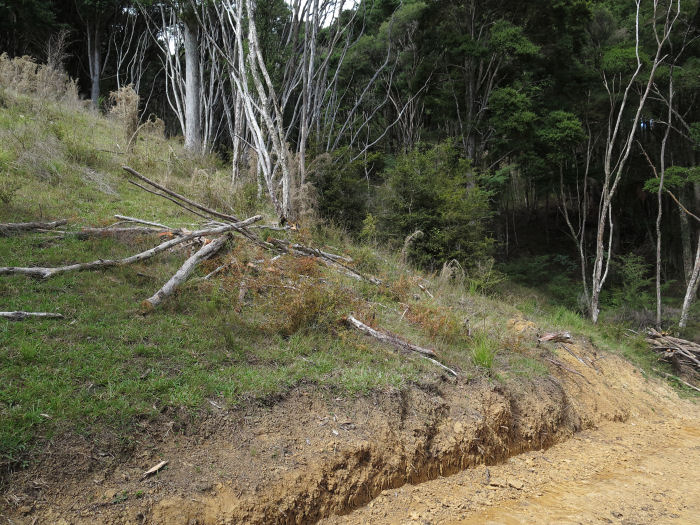 This photo is taken from about 50 metres further out, standing on Route 356. 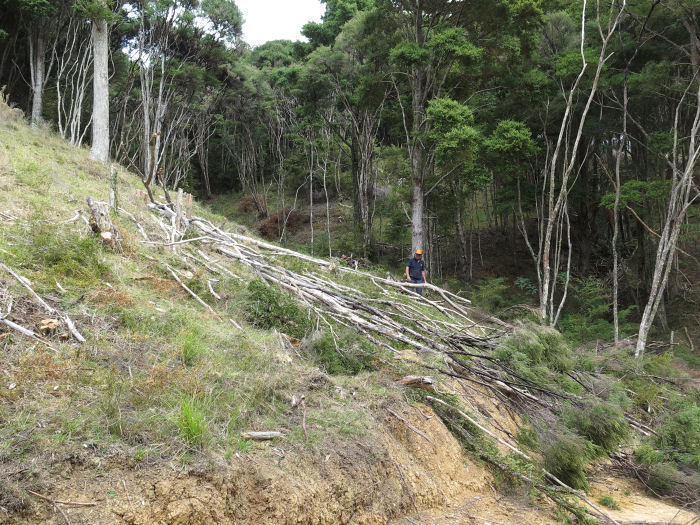 About three hours later I returned to find Stephan had cleared much of the slope between the track and that little gully, ready to cut an access track in with the tractor.

There's an interestingly angled, spindly Kanuka trunk in this picture (to the left of Stephan), along with two straight vertical ones, which are recognisable in the top picture too.

I spent much of my day sorting out my heifer calves' pedigrees, in preparation for considering who will stay and who can go for sale this year.  They are here, if you're interested.