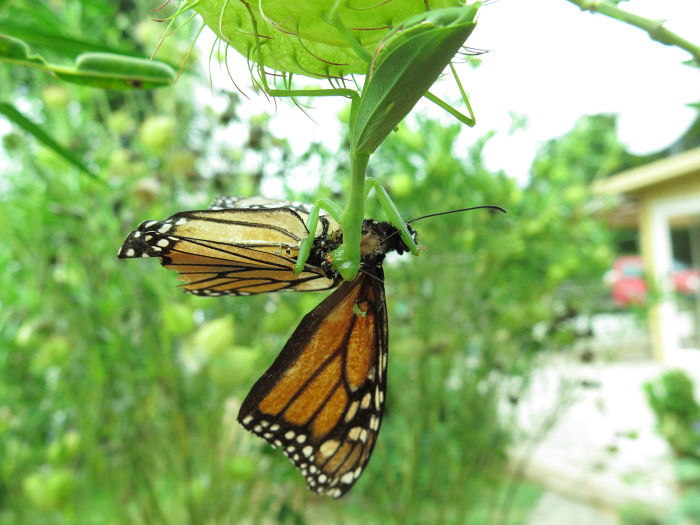 Oh.  So butterflies don't fly up to heaven when they die?  They get eaten by other things.  This one's wings look battered enough for it to have been dead, or almost so, before it became dinner for the Mantis. 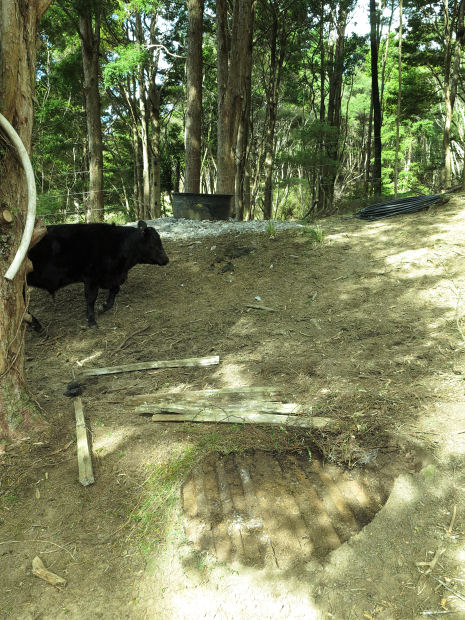 There were two troughs here in the foreground, on each side of the old fence between the Middle Back and the PW.  Stephan emptied and removed the PW one and installed it by the new fence.  The other one was still here, disconnected and now that the cattle had emptied it, we took it away and it waits at the bottom of the hill for installation somewhere else.

After the trough was out of the way I had a look at the ground beneath it, finding all sorts of creatures, now exposed to the sunshine after making their homes in the protected darkness under the trough, which hadn't been moved for several years. 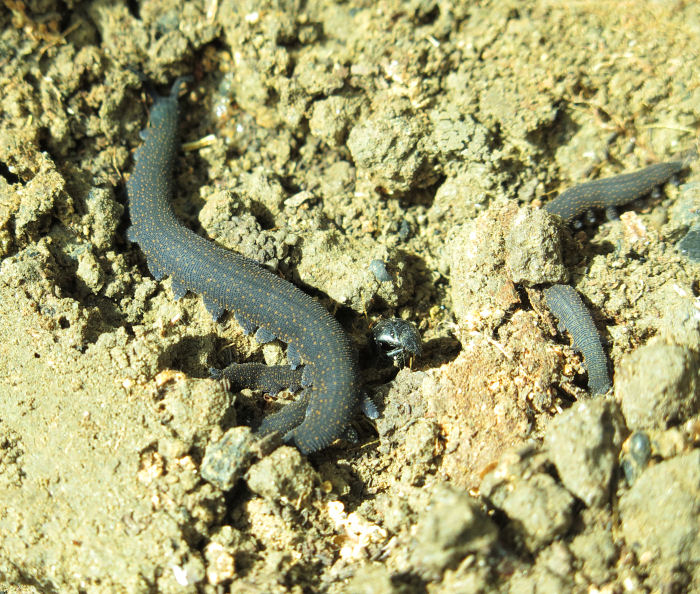 The most interesting were these.  I had a feeling I knew something about them when I saw them, so took several pictures.  They are Peripatoides novaezealandiae, peripatuses or ngaokeoke. 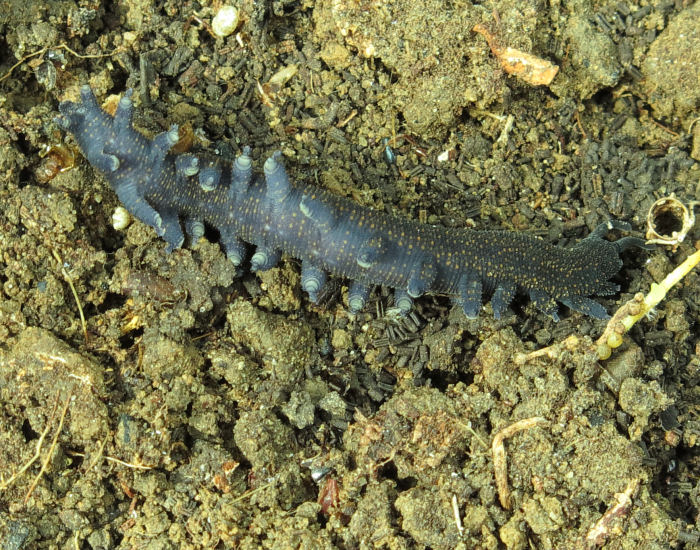 So many creatures live around us that we rarely see.  It's always exciting to discover and identify them.

I left these to find themselves a new environment in which to live.  There were several large holes in the ground under the trough which might have belonged to them but in any case there were lots of other suitable possibilities nearby. 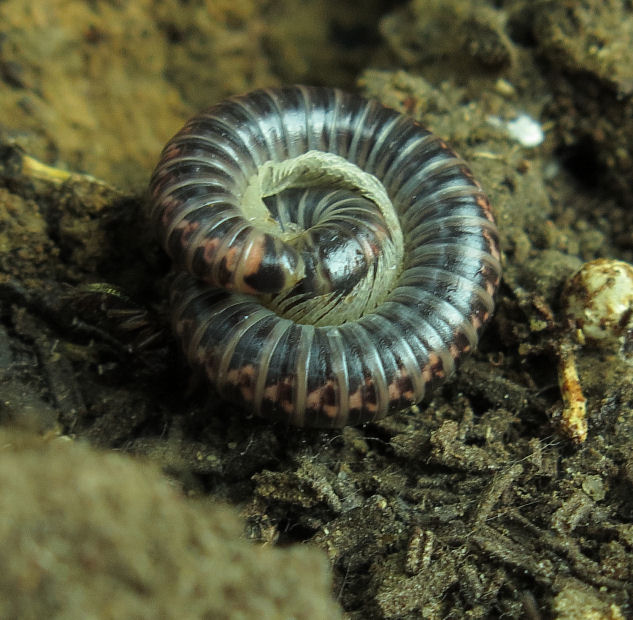 A millipede was either sleeping or had curled up in defence when disturbed.  So many legs! 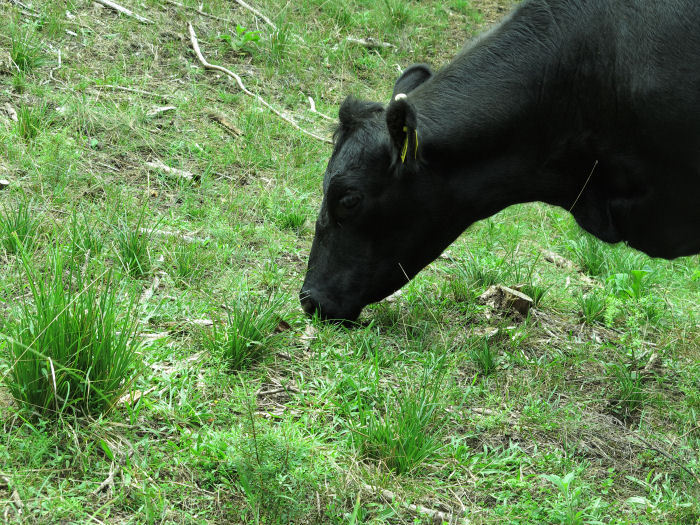 I sat and watched 143 browsing her way up the slope, trying to see if she was eating the Australian sedge plants.  The cows do eat them, but not enough to keep them under control.

This is the nature of some of the "pasture" my animals live their lives on.  It's not all lush grass and clover.  Out here the soils are very acidic, particularly in the areas still being reclaimed from the ever-growing scrub cover. 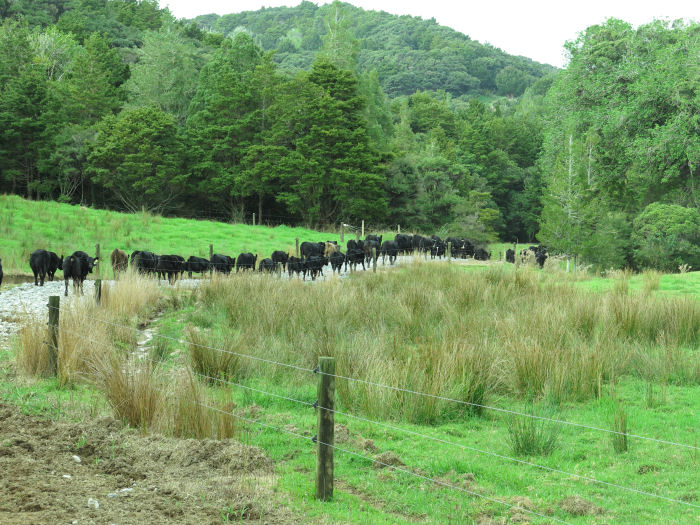 I'd moved the cows over the ridge from the Middle Back into the Big Back North yesterday afternoon and this afternoon, once some rain had passed, went out to get them in to weigh them.  But it took me longer to find them all than I anticipated and then the rain started again.  I put them into the Windmill paddock for the night and will weigh tomorrow.

The rushes here, in the Bush Flat, grow in an area of boggy ground which may be wet because water is emerging there or it might be water which comes from the Small Hill up to the left.  Stephan has dug a bit more of a drain along beside the track and we'll see if that makes a difference to where there is water over the winter.

Reducing the constant moisture of this area, applying some lime, and some judicious use of the weed wiper to apply glyphosate to the rushes, will eventually eliminate them which will, in itself, help the problem.  They grow in thick clumps and the cows tread boggy holes between the plants when it's wet. 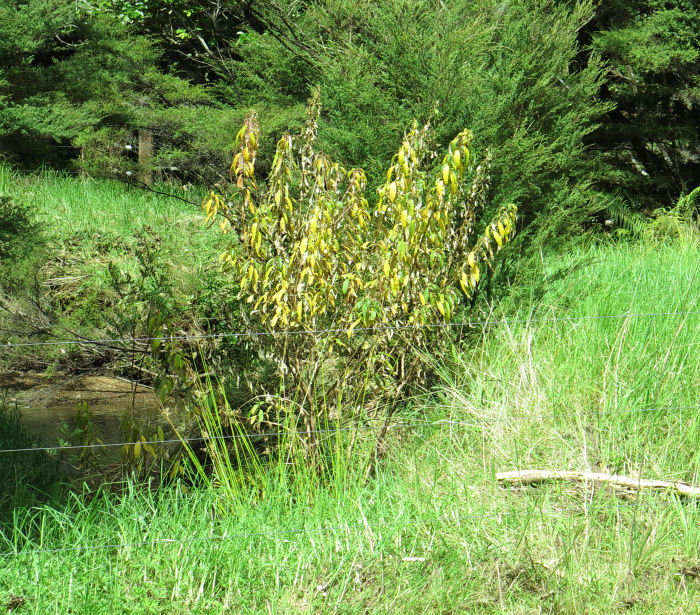 The Tree Fuchsia.  There are a couple of small branches with still-green leaves but I'm not very hopeful for this tree. 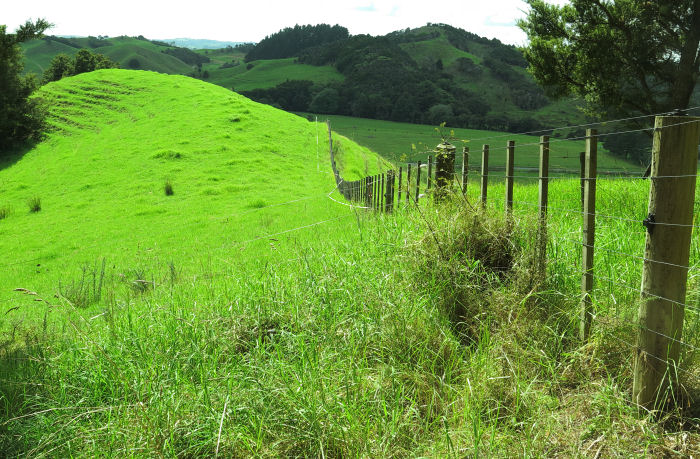 I spent a bit over an hour walking the boundary Over the Road this morning, checking that the torrential rain hadn't caused any problems with slips or toppled trees.  From the top of the hill through some trees, I could see that the tape down the boundary in the other part of the paddock, was not as straight as it should be.  In strong winds, the tape had been blown and caught around the battens on the boundary fence, which will have been causing the loss we had measured at the bottom of the hill with our clever remote control and fault-finding device.

After lunch I brought the big mob in and commenced weighing them all.  I thought it would be easiest, working on my own, to just weigh everyone, since I want cow weights for weaning percentage calculations in the next month anyway and the cows will now be at their lightest weights. 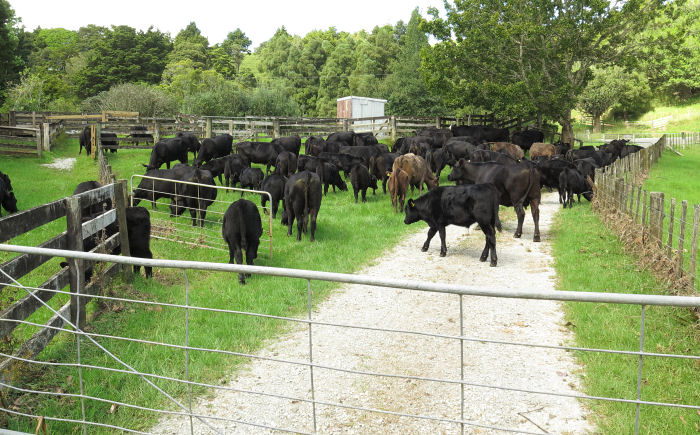 It was a big job and I got a bit too frustrated a couple of times, more to do with my own state of mind than what was really going on.  From that point of view it wasn't the best day to do this work but from a management standpoint, it was.  I told 613, who never goes easily up the race onto the scales, that I hated her, and behaved very badly for a couple of minutes, partly frustrated by an earlier unfortunate moment with her daughter.  I should, in both instances, have stopped what I was doing for a moment and taken some deep, calming breaths! 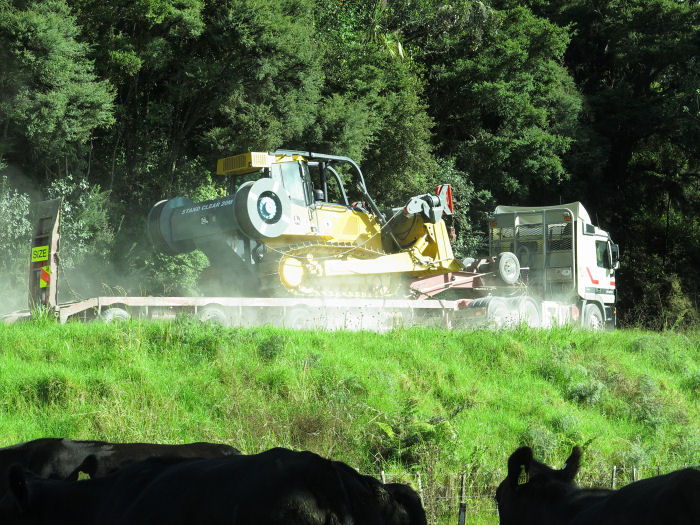 This big truck went down the valley, empty, when I first started working in the yards, and then its pilot vehicle came up the road again sometime later, preceding this enormous machine.  The logging operation must be ramping up again for the winter.  Big truck-and-trailer loads of roading metal have been going up the valley for a while and it looks like they're taking some big machines in to expand that forest road network before logging begins again.  We think logging has continued on the Waiotehue Road side of the Diggers Valley pines block over the summer but that road is presumably less stable during the wet winter than ours. 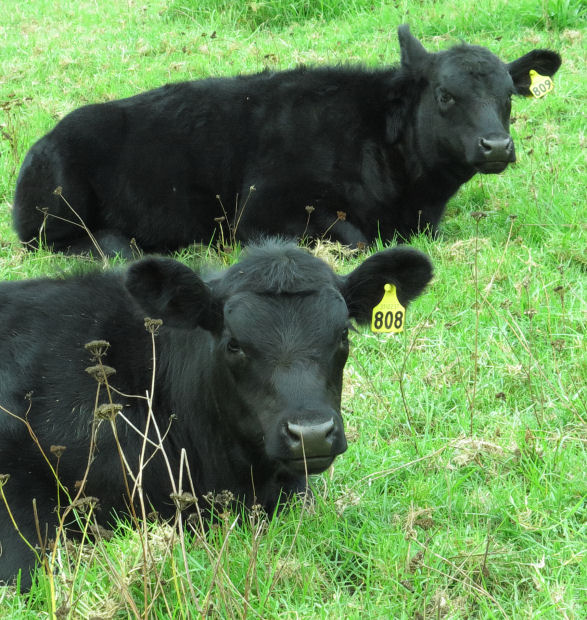 The twins' daughters.  They're not quite as similar as I thought they looked when they were very young.  Meg's calf, 809, has a curlier coat than sister 808.  Their dad was Eva's son, Pono 144.

Our lovely homekill butcher, usually known as Sniff, died the other day.  He'd had cancer for several years but last time I phoned him, barely a month ago, he said he was in pretty good nick and things were looking good.  It was a sad shock to spot his death notice in the local paper last night.

We drove around to the Takahue Hall for the funeral and people were stopping to park a kilometre back up the road from the hall on the corner.  I had to drive Stephan down to the Hall, since he can't walk much.  Inside, those who'd arrived earlier had seats but for half of the gathering there was standing room only, around the back and sides of the hall.  Someone had blacked out the windows and had instructed that they be kept closed - the funeral directors, perhaps, hoping to net some more clients as we all fainted to the ground?  It was stiflingly hot and after the eulogy and other speakers and the usual slideshow of favourite photos, we had to get out, before the rest of the service.  I'm very glad we attended, even though we weren't there for the end.

We went on into town for my physio appointment (hurt my back a few weeks ago and need to get it checked out) and Kaitaia seemed very quiet, with so much of the community still in the Takahue Hall.  It seemed that everyone knew Sniff somehow.  He was an extremely personable, interested guy, who was obviously a vast range of different things to different people, all of them with a genuineness which engaged everyone he knew. 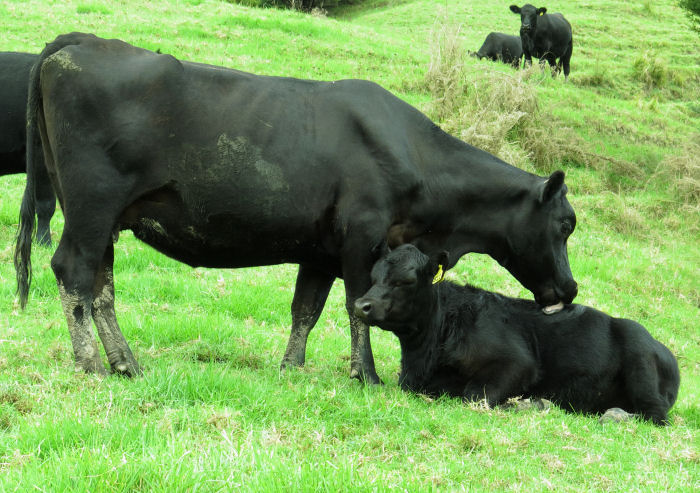 Jet 777 is looking a bit better than she did earlier in the season.  I gave her (along with a handful of other 'skinnies') some pour-on drench when I weighed them two days ago, to continue to support her improving condition.

Looking back in my records, she's actually only 8kg heavier than in January when I treated her last time; but we've been through the fairly stressful dry period where she could easily have lost weight. 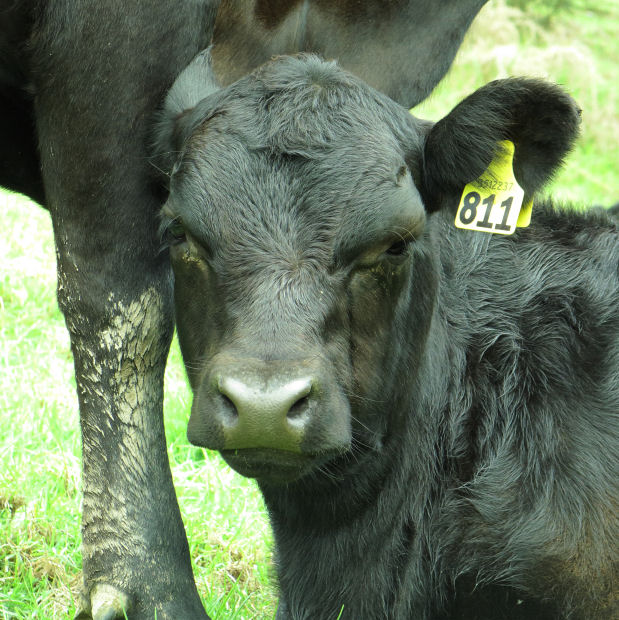 Her daughter looks like she's had a fight with a wasp: her left upper eyelid is very swollen. 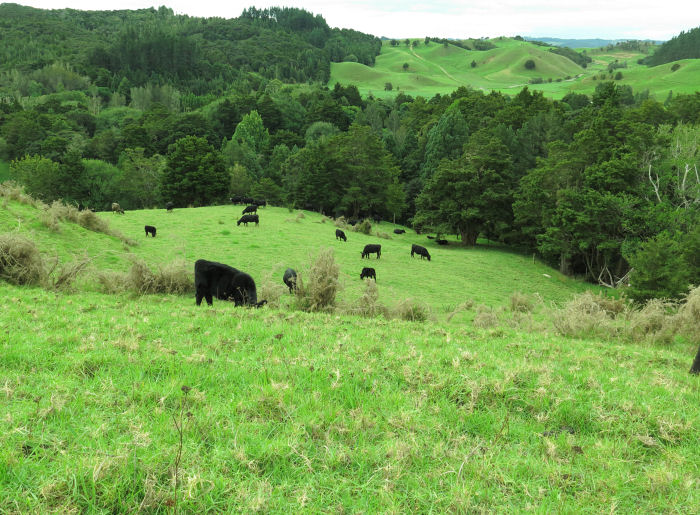 The cattle like it up here when there's lots to eat.  There are many flat and warm spots to sit and ruminate and cool and shady places when it's hot.

The green in the background is the dairy farm nearly next door. 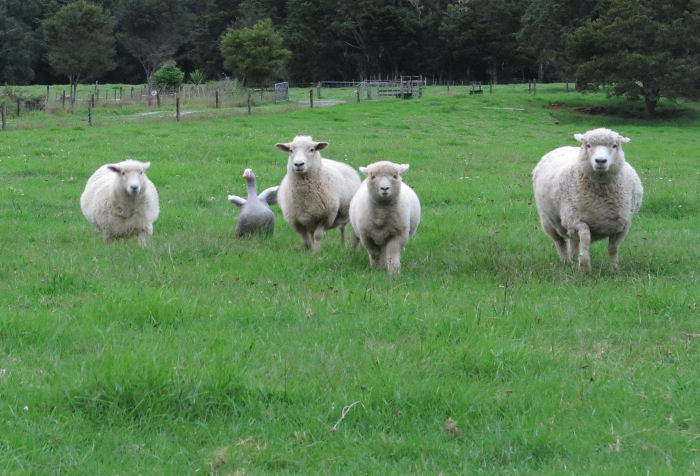 The sheep, on the wing and run to their evening maize treat.  The other lamb must be behind one of the ewes. 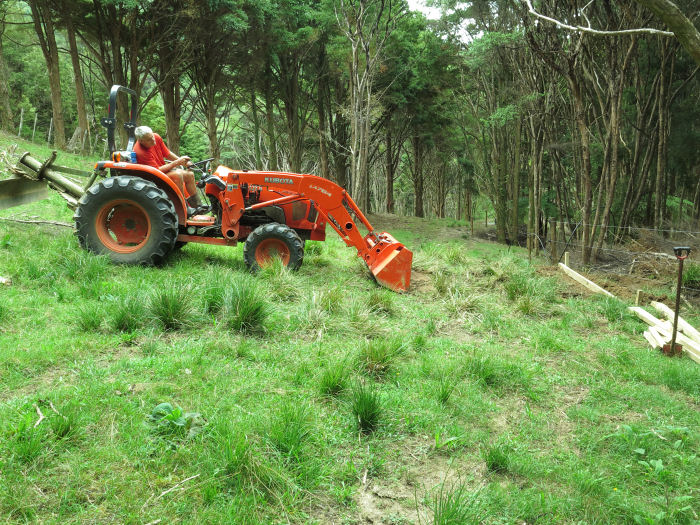 We started preparing the new tank site this afternoon.

While Stephan worked with the tractor and, occasionally, a shovel, I wandered around with the weed wiper, poisoning sedge plants, of which there are a great number.  I wanted to stay near in case he required assistance, in his slightly disabled state. 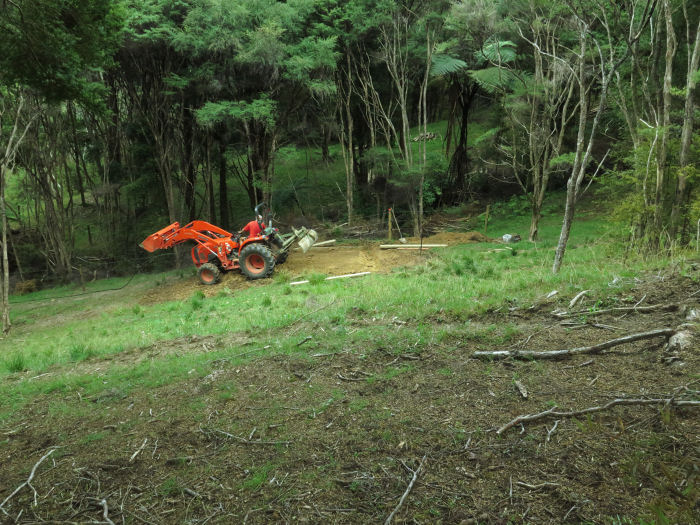 We could have gone even higher but we're not entirely sure how far up the water would run and that was the best spot in terms of being relatively flat, high enough, close to the electric fence so we can put a fence around it.  We'll also need very little extra alkathene pipe to do the required plumbing.

Stick Insect sex.  These two were hanging from the middle wire of the new three-wire fence up the other side of the gully from the tank site, as I climbed through the fence to wipe more sedge. 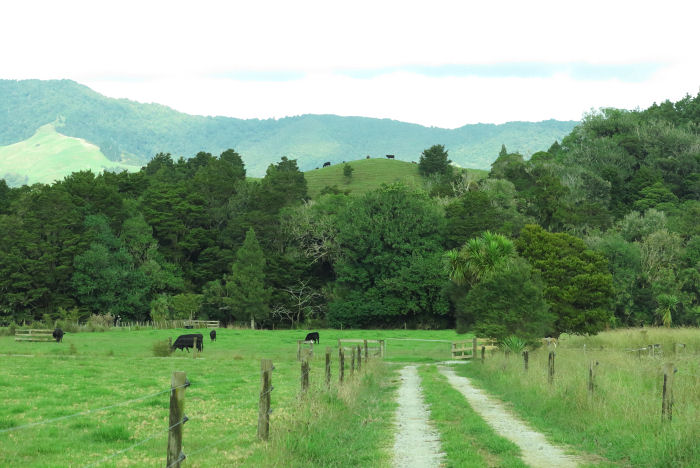 Riding home the silhouette of the animals now in the ⅓ part of Over the Road caught my eye.

Zella, Imagen and their calves are in Flat 1 in the foreground. 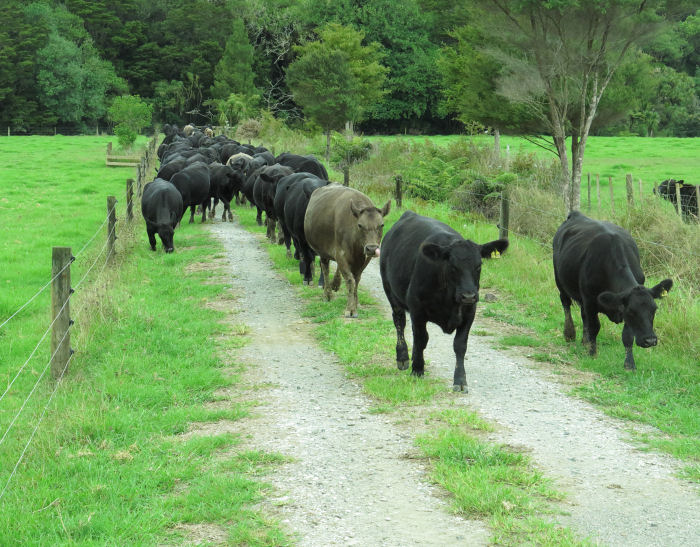 After spending the middle of the day in town, we found a noisily complaining mob of cattle down by the gate Over the Road, so immediately moved them back to this side.  I am finding it quite hard to judge how quickly so many animals will eat all the feed in a paddock - particularly when the really fast grass is growing so fast and the rest of it is just growing well.  The cattle are moving around the farm quite quickly to keep it all under control. 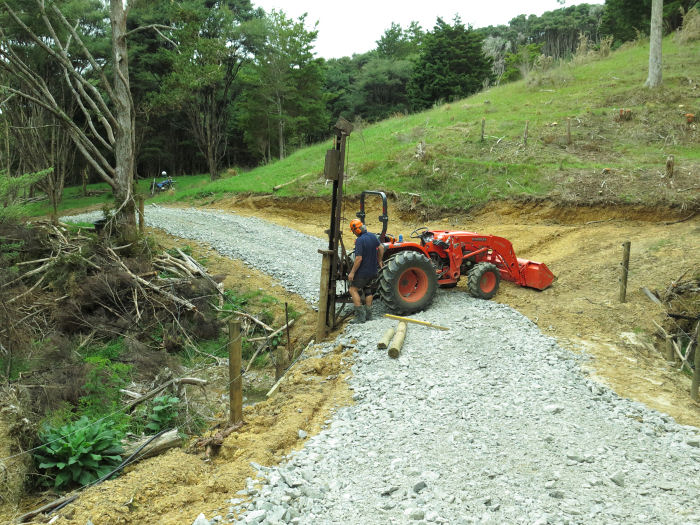 In town we'd decided to buy a three metre stay (a big post) to replace the ordinary post which had washed out from this corner.  Then we took it out and together, since Stephan can't so easily climb on and off the tractor, set it up for thumping in to place.

We think this one should stay put, with enough length to go well down into hard ground.