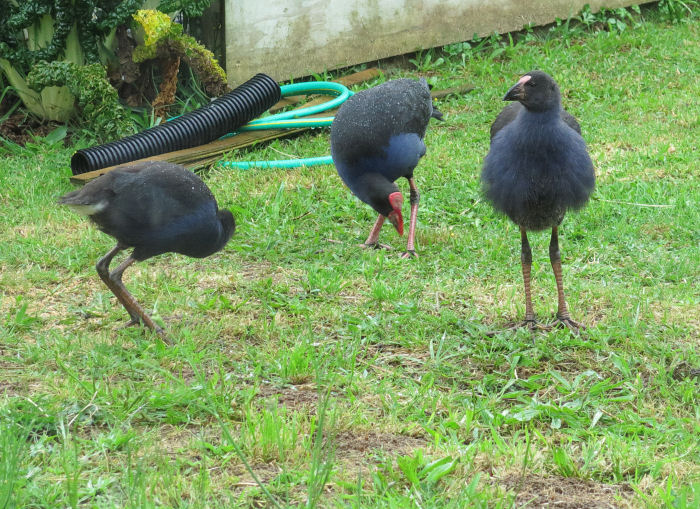 The last pair of Pukeko chicks are now almost adult in appearance - just their tails to grow a little more, their shields to colour up and they're still a bit smaller than their parents.

We had the annual all-day power cut today.  I'd thought it was advertised to start at 9am, so was pretty irritated when it went off just after eight, when I was still preparing some work to do on Stephan's laptop computer later in the day.  Oh well, it would be back on around 5pm. 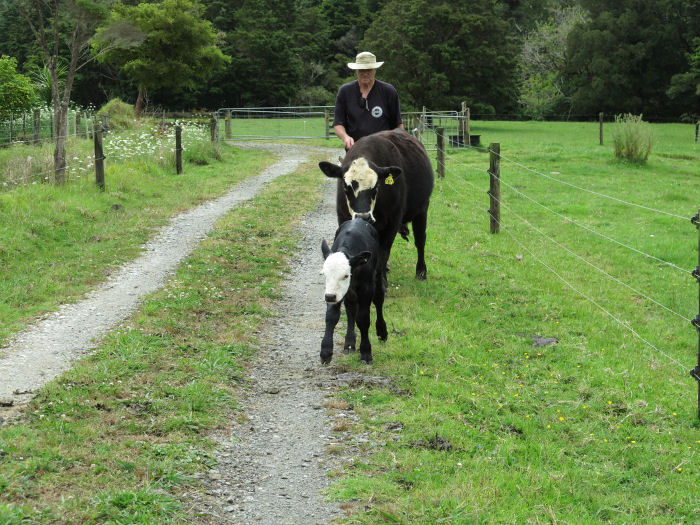 787 continues in her own very slow time; today on her way to the yards so we could weigh and tag her calf.  Several times along the lane we took her calf ahead, leaving her behind: that was the only way to get her to move. 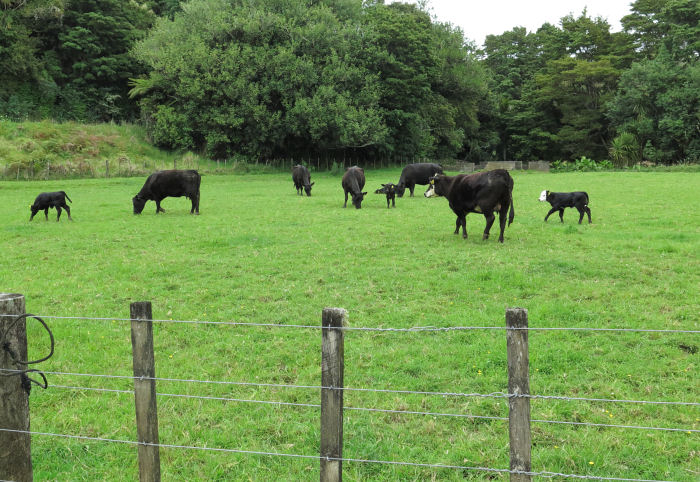 We'd gathered up three groups to make this new mob.  I drafted still-pregnant 743 and companion Ida 145 away from their three friends with calves and brought the cows and calves in, then Endberly, Gem and 729 from Flat 2 and 787 and 750 from the House paddock.  Mixing them all in the Pig paddock was a reasonably calm end to the day's activities, all the calves with their numbered tags in their ears. 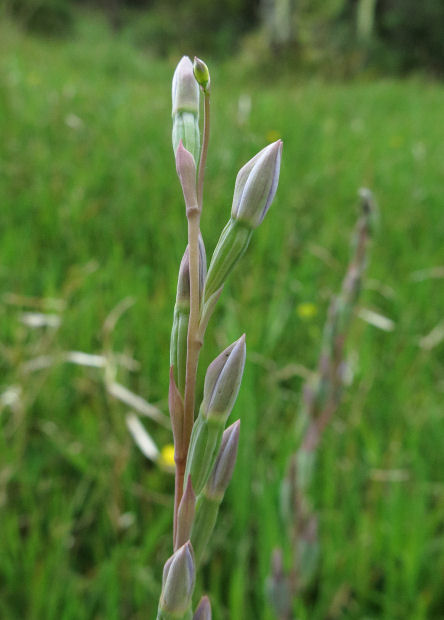 It would seem that despite some reasonably warm, sunny days, the air temperature is still far too cold for the sun orchids to bloom.

These flowers' green ovaries below the flower petals, are already fertilised and growing in size, so the flowers will no longer open, if they ever did this season.

I'll have to wait another year. 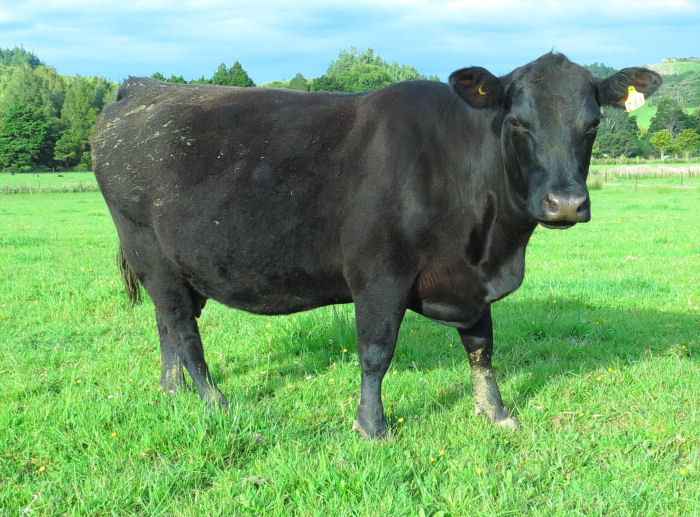 Still-pregnant 743.  I inspected her closely this afternoon, since I'll be away for the next three days.  I'm not expecting her to calve until the 4th.

In Auckland this evening was an event we had initially planned to attend: the launch of Renée's memoir, These Two Hands.  Renée has been corresponding with me since hearing us on the radio several years ago.  Stephan and I are both readers of her books and I'm a (shamefully intermittent) reader of her blog, WednesdayBusk.  Stephan still remembers many of the lines from Wednesday to Come, the play in which he played Ted.

Too many other things subsequently entered this week's calendar and we had to give up on the idea of the quick road-trip to Auckland and back.

Renée was also interviewed by Kim Hill on Saturday Morning, which we have both enjoyed listening to a couple of times this week.

I was off on the 6.20am plane to Auckland this (Wednesday) morning.  I spent the day in the city visiting my dentist, my mother and then meeting nephew Issa for the first time in a couple of years (he's been overseas), during a family dinner at Jude's.

Thursday morning I caught a 7am plane to Christchurch, where I met the other two members of my Veterinary Council's complaints committee and our legal advisor and the four of us drove further south to meet with a number of parties to a complaint, during the day.

It struck me later, that while we were dealing with a lot of distress for the people we met, and were naturally affected by it, overall we had a fantastic day.  It was the first time our committee (formed a year ago) had met together in person specifically for this purpose.  We'd had one short meeting about a case when in Wellington in August, but our previous cases had not required in-person meetings with the parties.  I think we worked very well together.

I thought about "having fun" while on serious business and concluded that if you're not enjoying the social and surrounding aspects of your job, why would you do it?  Of course I know the answer to that question for vast numbers of people.  When I worked in the awful Mt Albert Telephone Exchange as a young telephone technician, workplace bullying, constant sexism and occasional sexual harassment were part of everyday life.  Those aspects were something a young woman couldn't do much about, since the prevailing attitude was that I shouldn't have been there anyway.  In some workplaces and some people, that attitude hasn't changed much.
But these days I generally don't have to work with such people and it seems that most intelligent people of my age have developed quite different attitudes from those held by their fathers' generation.

New Zealand is a very small place.  Sitting with my companions waiting for our flights out of Christchurch, one of them suddenly got up and dashed over to greet a woman I was sure I recognised.  Her name wasn't particularly familiar but when she subsequently came over to talk more with her acquaintance, we figured out that we knew each other because of connections up here: her father was Pat, married to my family friend Gillian.  We'd not seen each other since Pat's funeral and out of context, neither of us could quite place the other.  My fellow committee member couldn't quite believe that someone he knew well (she'd once been the practice manager in his veterinary clinic) had this extraordinary connection with me.  It's weird when it happens but is a common experience for many Kiwis - you bump into someone from your home town when getting off a ferry in Calais, for example.

Friday I learnt how to be a pool attendant, having gone to visit Liz in her enormous house in Remuera, which she was preparing for an open home the following day.  The pool needed to be beautifully clear, without any nature in it in the way of leaves.

Catching up with Liz has been quite marvellous.  We were extremely close friends throughout the Mt Albert experience and for several years afterwards, until our lives went in different directions.  Reconnection with each other has meant, for me at least, a rekindling of that very fond feeling.  I like it.

Then back to the Eye Institute to see nephew Nick, who reassured me that an ongoing problem with my left eye is probably going to continue to improve with time.  I seem to be an "outlier" when it comes to healing time and sensitivity to vision changes.

Home again in the evening.  As I sat in a taxi in rush-hour slow traffic on the way to the airport, it occurred to me that if I missed the flight, I'd have to wait to come home until Sunday evening: there are no Saturday flights in to or out of Kaitaia.

This time last year I got a long way behind myself in writing these weekly pages and gave up, leaving a gap in time.  Now I've come to the same weeks this year, I have begun filling in those gaps, so that the This Time Last Year links will work.