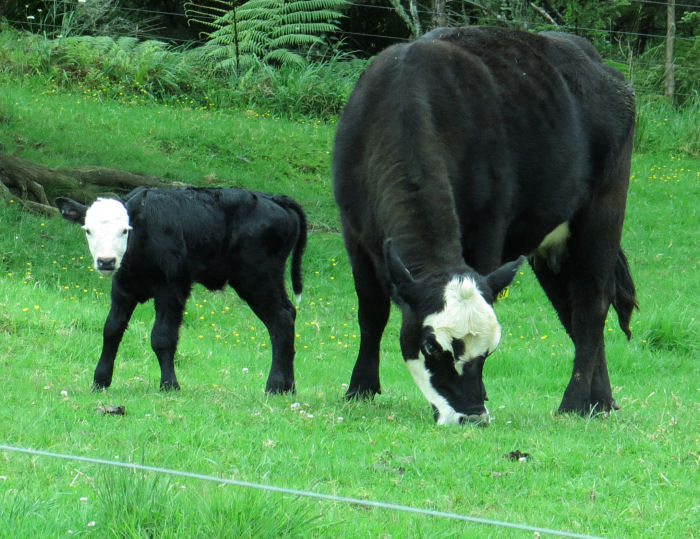 787 and her son.  As well as his white face and tail-tip, he has one white toe on each hind foot, with a little white patch above each.  Genetics is always fascinating: this calf is 63/64 Angus, over 98% Angus blood, and yet there are white feet patches after there not having been such colour in any forebears for generations.  The white face is obviously a much more striking trait but its inheritance is a 50/50 chance from one generation to the next. 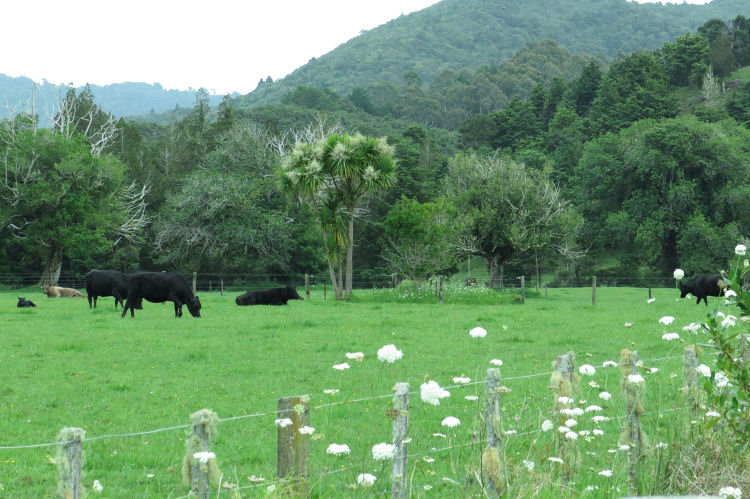 A few cows I need to sort out.

There are three cows with calves in here, two without.  743 isn't due to calve until, probably, early December and Ida 145 is not pregnant and can therefore remain 743's companion when I draft them off on their own.  That may unsettle them slightly, since 145 spent the winter with the mature cow mob and 743 was with the pregnant heifers and they've only been together for a few days and will probably miss those I separate them from.  They'll all meet again before long. 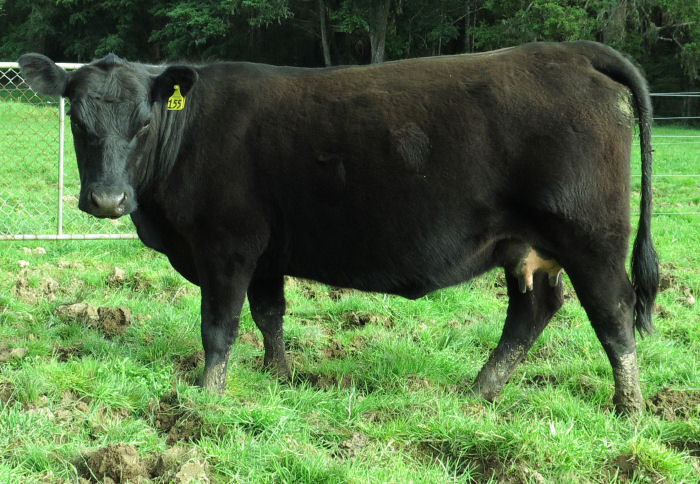 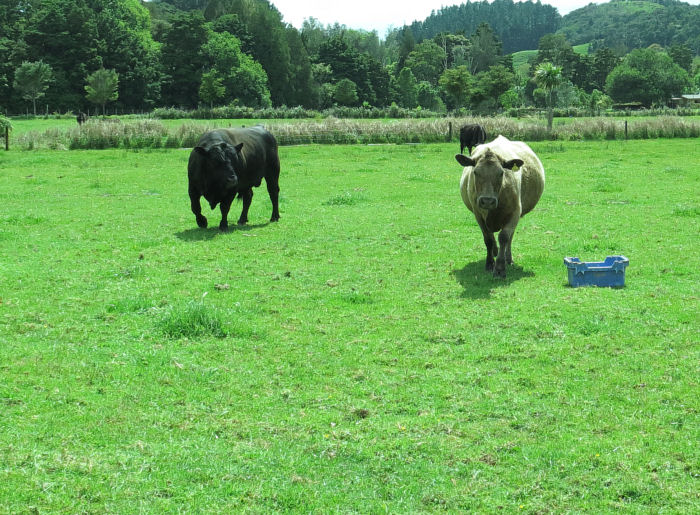 Processing milk this morning, I was trying to work out why it looked like the bull was in Flat 2, rather than Flat 3.  It turned out it was precisely because that's where he was.

He must have rubbed his head on the latch of the gate down the bottom end of the paddock, which was now open.  That gate latch has a ring on it to prevent such opening but a bull rubbing his head very intently appears to be able to accidentally get around such precautions.  When there's an open gate, naturally you go through it to see what's there.  Nice if you find some cows!

Endberly appeared to be of significant interest to the bull, but I don't think she was on heat yet.  We quietly moved the bull back to his own paddock. 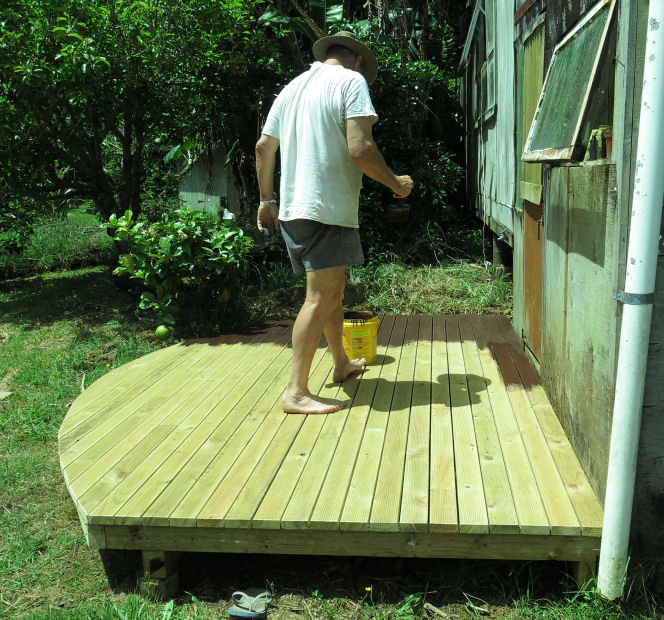 When we built the deck at the front of our house, we used an oil stain to protect it and it was pretty hopeless so this time we decided upon paint.  If this looks alright, we'll probably end up doing the house deck with it as well. 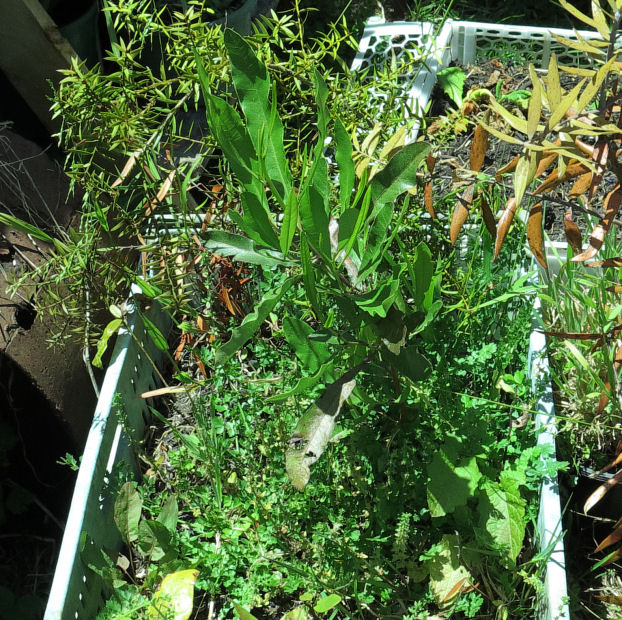 This little tree is the Akeake I rescued from the PW as Route 356 was going in. 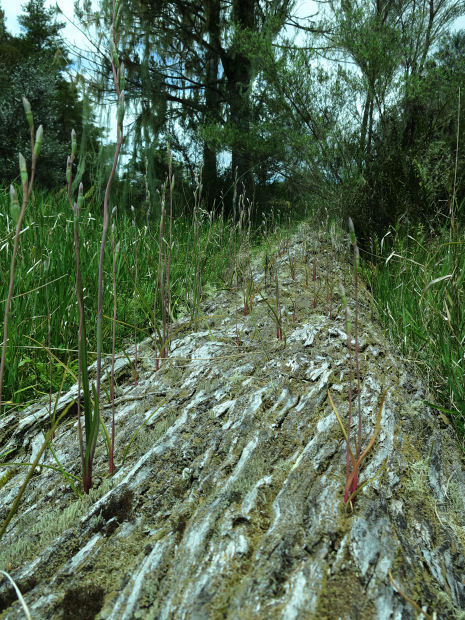 The fallen Puriri trunk in the middle of the Big Back swamp is now the home of dozens of Sun Orchid plants.  You'd think surely there'd be an opportunity to see at least some of them blooming.  But by the next warm, sunny day, all but a couple of buds had gone beyond that point and the ovaries below were growing: this spring has been ridiculously cold and even the sunny days have not been warm enough for these lovely flowers to come out.

The population here is steadily expanding, with many more plants than there were three years ago. 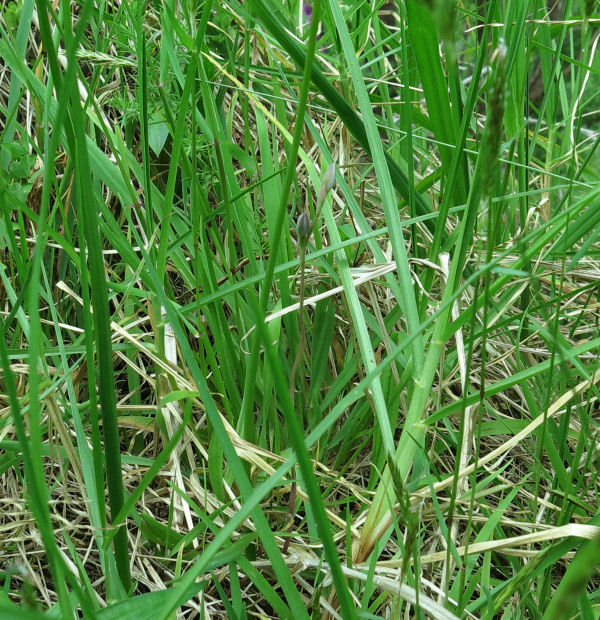 There are also, if I look out for them carefully, many plants to be found in other places.  Some are out in the paddock areas and others just inside the swamp reserve fence amongst the long grass.

As I waded back from the big log, I wondered if I'd been particularly lucky to see so many flowers in other years?  Some springs have been equally cold and disappointing for orchid spotting but in some years there were multiple opportunities to photograph lots of beautiful flowers around the farm. 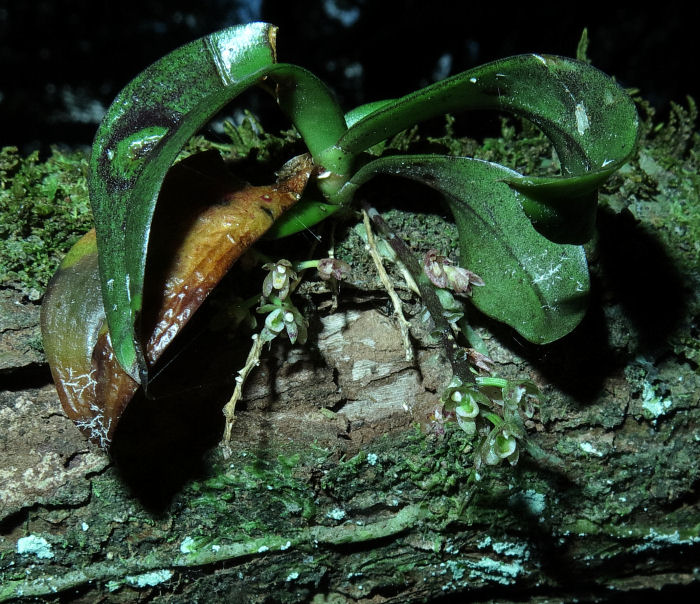 The tiny tree orchids always seem to flower, whatever the temperatures. 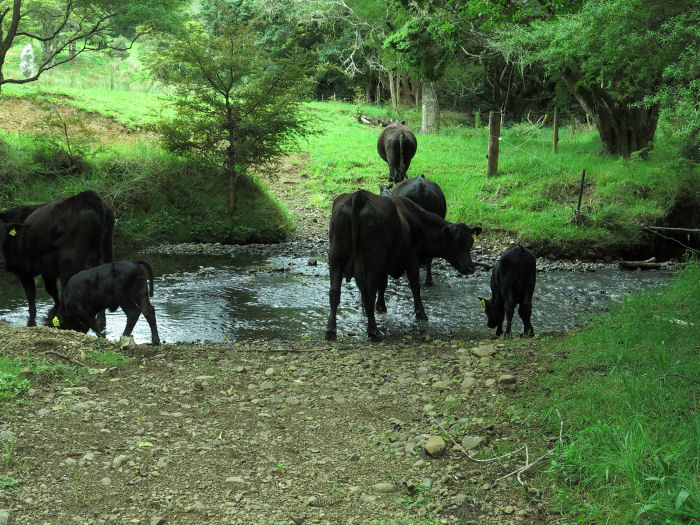 We tagged the first calves today, taking the four from Flat 1 to the yards.  We did it in our usual quiet, slow way, letting the cows and calves settle together in the grassy yard at the bottom, then bringing them up in their pairs when we figure out which calf is with which mother.  These calves could all have been done as a group, since they are all so distinctive: the only bull belongs to Henrietta 141, the huge, light-brown heifer is Jet 777's, little black heifer is Genie 150's and the white-faced heifer can only belong to white-faced 788.

We get each calf to stand on the scales platform, then Stephan wrangles it gently back off the clanky metal platform and holds it against the rails as I enter the race from the front with the ear-tagger and install the new ear furniture.  It hurts them, so I just have to grit my teeth and do it.  It's presumably only as bad as having our own ears pierced and the pain will soon pass.  There are two distinct ridges of gristle from the inner to the outer part of the ear, which I try very carefully to miss.

Then another new thing, their first stream crossing, up into the Tank paddock. 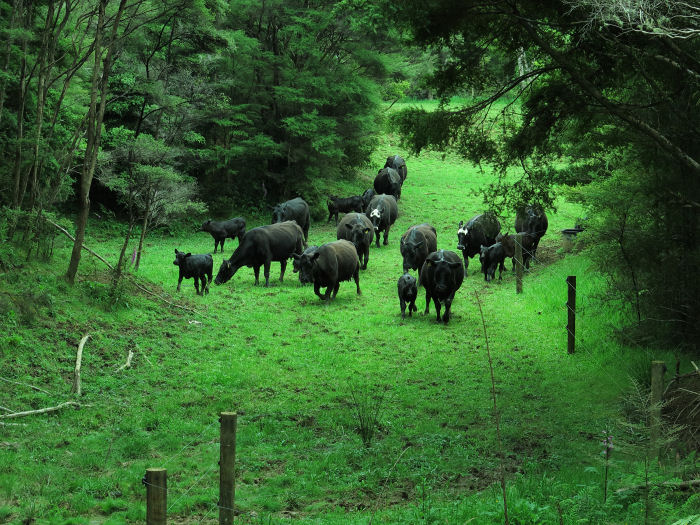 The 11 pair mob in the Spring were in need of a move and eventually followed my call around to the Middle Back gateway. 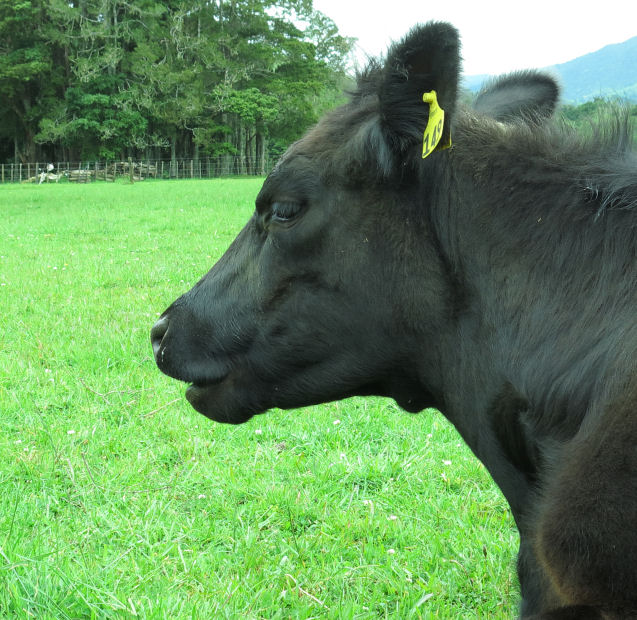 Queenly 149's jaw looks pretty normal again now.  She'll take a while to gain sufficient condition to look like a really healthy animal again but at least she is getting better.

I am undecided whether or not she'll be staying.  It is quite likely that if she manages to get in calf this year, she will be undesirably late (a difficult calving often causes a delay in a cow's return to oestrus).  But beyond that, the difficulty of her calving was very much related to the shape and conformation of her calf - very similar to the surprising lack of ease of her own birth when her mother was a four-year-old.  On an ongoing welfare basis, it would probably be wise to eliminate this family from breeding. 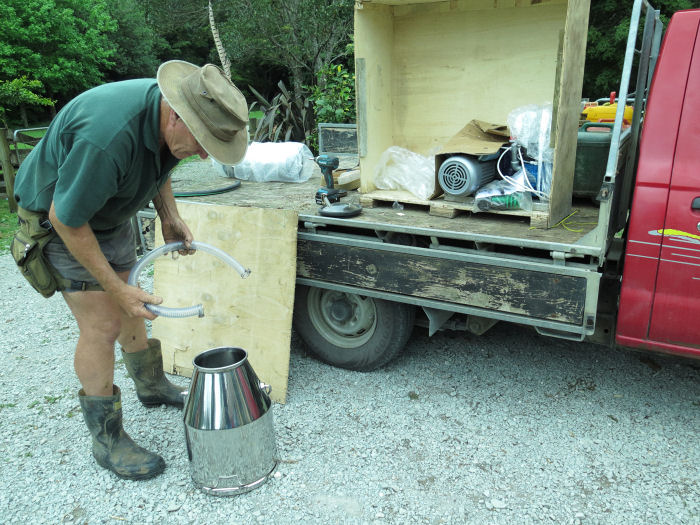 We've bought a milking machine.  Having a Zella restricts our ability to go anywhere for more than a day for nine months of each year and sometimes that's difficult.  I now can't hand-milk, so if Stephan can't be here or is otherwise indisposed, we'd be in a bit of a bind, especially since our best relief milking candidate has developed arthritic fingers and can't help either.

We bought a kit-set model, rather than a mobile trolley-mounted one, thinking that would provide flexibility to place it where we want it in our milking shed but, stupidly, the machine has arrived with the same lengths of hose it would have for a trolley mount.

Excellent news for us this afternoon, from ACC, reversing their previous decision not to cover Stephan's knee surgery.  If only this hadn't taken quite so many months!  The whole system is ridiculous.  Many people suspect now that ACC turns down most surgery applications (particularly in older people who are told their injuries are due to "gradual process") and most applicants will quietly go away and wait for the public system to, one day, operate on them.  I am not one of those people and requested a review.  After much to-ing and fro-ing between ACC, us, the surgeon, the physiotherapist, sufficient information has been gathered for ACC to make the correct decision.  We were booked to attend a review hearing next Wednesday afternoon but that will now not be required.  I immediately emailed the surgeon's clinic to request a surgery date.

Coincidentally earlier in the day someone from the public hospital had rung to ask Stephan a set of questions to assist in prioritising him on the waiting list for surgery.  That option would have taken many more months.

Both of us have been feeling oddly tearful and hugely relieved.  This whole thing has been far more stressful than either of us was aware.  We had accepted that waiting was what we had to do and Stephan had been getting on with as much work as he could as the pain was gradually subsiding during activity.  The biggest issue has been that at night, particularly after doing a lot of walking about, the knee pain completely disrupts his sleep, so he has been chronically tired for most of this year.  That cannot be good for him.

Having not heard back from the Orthopaedic surgeon, I rang this morning and we now have a surgery date in a couple of weeks.  There is much to get done before then! 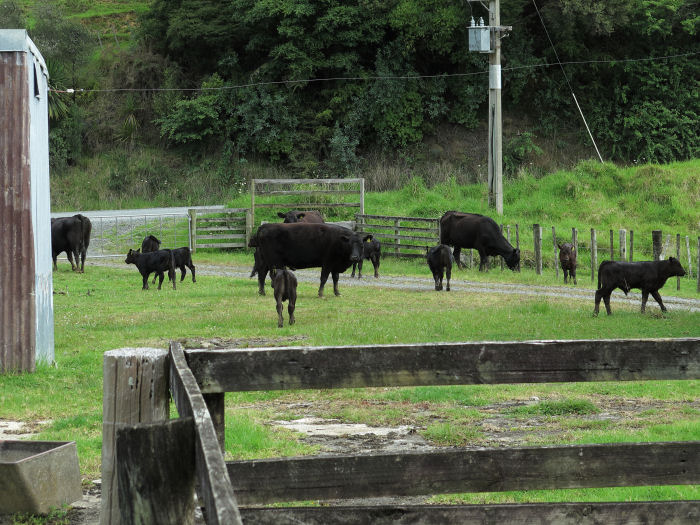 We tagged one of the mobs of eleven calves this afternoon.  Emergency, looking back in this direction from the middle of the picture, thought there was an emergency and that her calf had gone.  Strange cow.  The calf had just run past her; perhaps she didn't recognise her with her new ear tag. 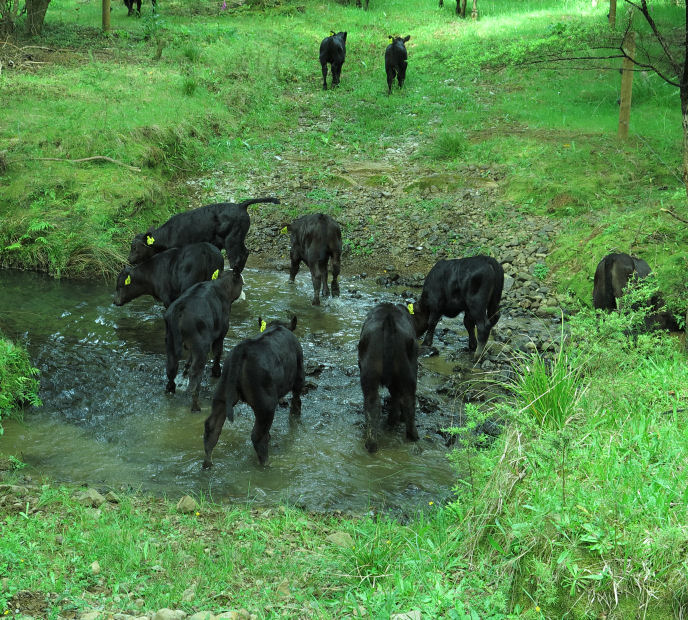 Then out to the Swamp East, across the stream, where this time the calves stood in the water for much longer than they have during their other crossings, some choosing to wade in quite deep. 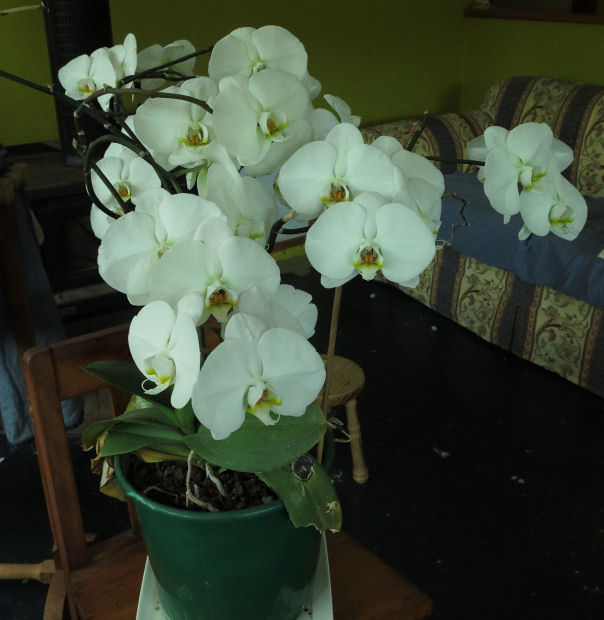 The beautiful orchid Jude gave me two years ago is in bountiful flower again, although this is only one of the two original plants.  The other succumbed to over-heated roots before I worked out what was causing it to weaken and it has now died.  This one looks vigorously healthy.