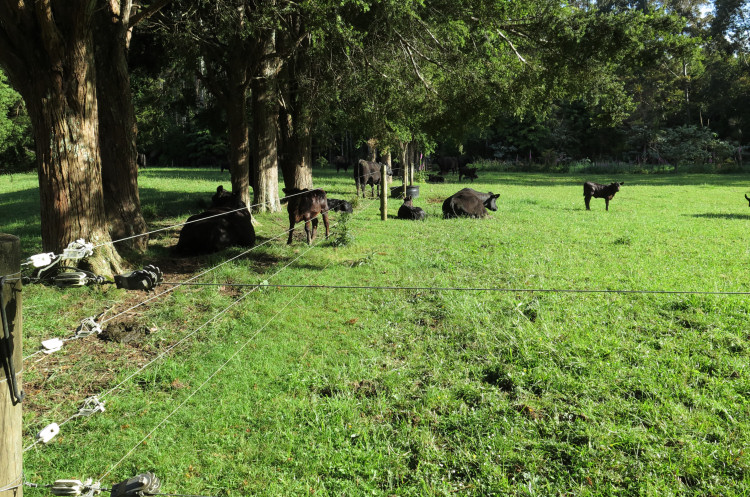 Yesterday afternoon after moving eleven cow and calf pairs to the Back Barn (on the left here), I moved Eva and friends from the Frog, along to the Swamp paddock.

This morning I came out early to check that everyone was still where they should be, some of them only being in contact with electric bottom wires for the first time yesterday.  Everyone was calm and in the right place.

We spent the middle of the day in Kaitāia at te Wānanga, for the last one-day gathering of our te reo course.  The final assessment for the year involved the delivery of a speech about a person of importance to us and I gave mine today.  My choice, made early in the year, was easy: I chose our friend Renée, writer, feminist, lesbian, inspiration!  It was not a complicated speech, since we are mere fledglings in te reo, but I derived much pleasure its writing, learning and delivery.  Stephan will give his, about William, at the evening class this week. 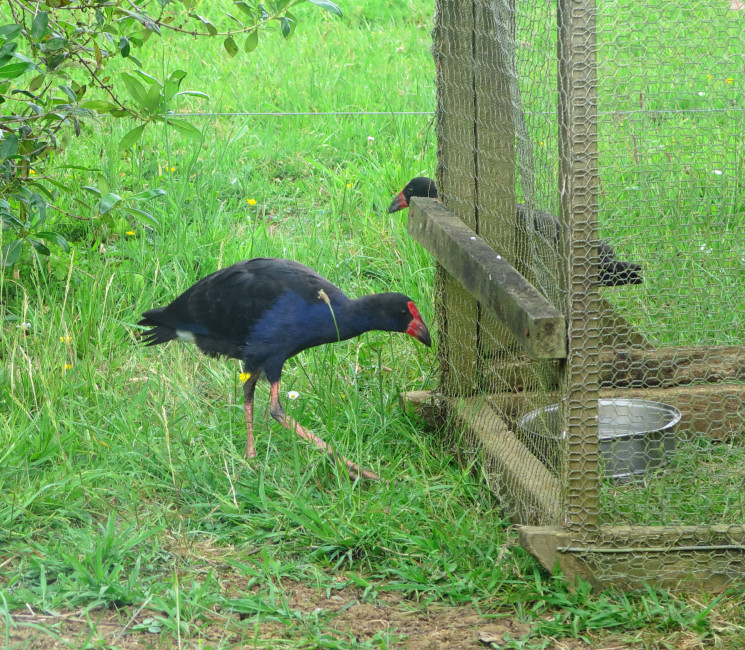 These are two of the three latest chicks from the Pukeko family down by the pond.  Bodily they're a bit slighter than their parents still and their bills are still dark.  When they reach maturity, their bills will be entirely red and they'll look just like everyone else.

Their parents are nesting again.  These two were of the third clutch so far this season. 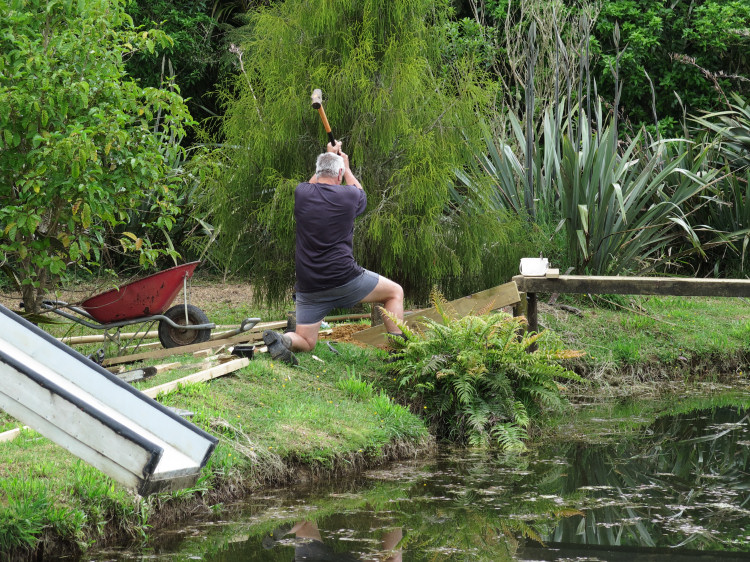 Stephan spent some time thinking about building stairs up to the bridge but then decided a ramp would do nicely. 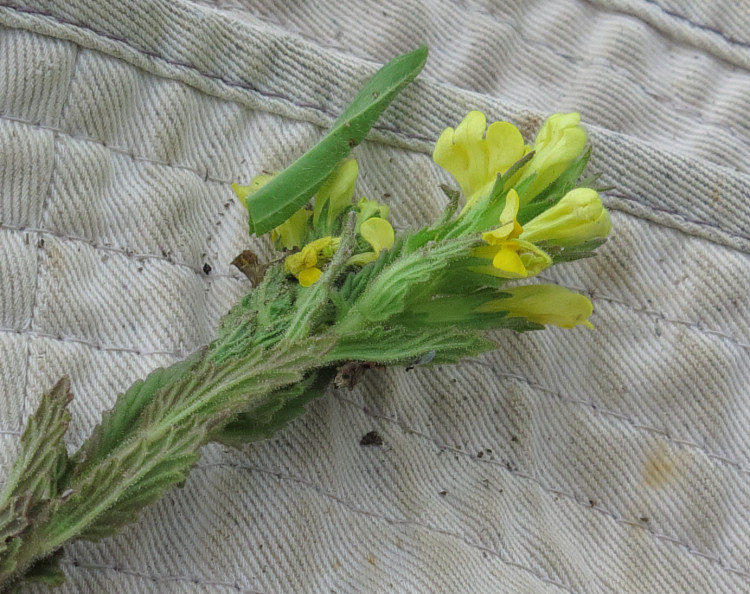 I pulled these Tarweed plants out before I thought to photograph them.  Time to start looking for them in all the places we found them last year.

They're sticky and unpleasant to touch, so last year I did all my weeding wearing milking gloves; but it is possible to pull them out without much contact with the leaves, down near the ground.  Their nasty tarry smell really sticks to the skin, despite repeated washing. 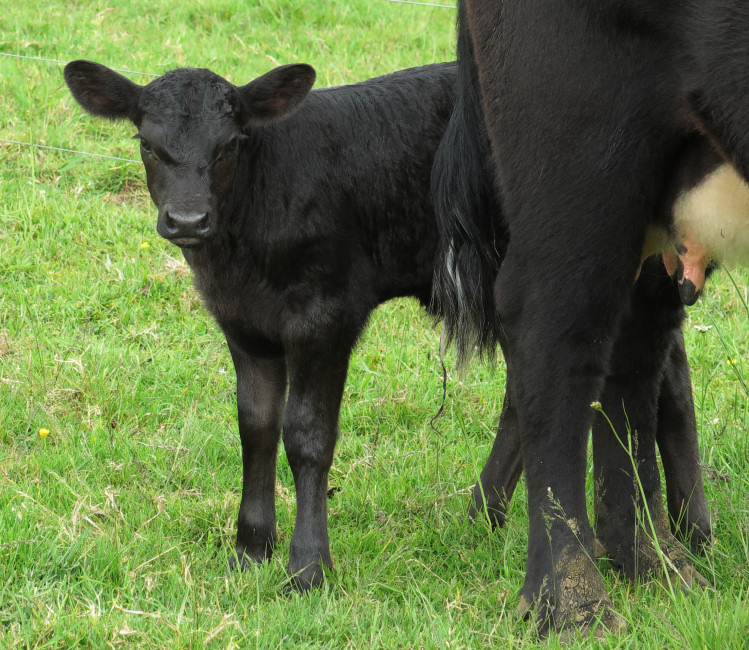 I don't know what her temperament might be like yet, since they're often a bit nervous in their first day or two. 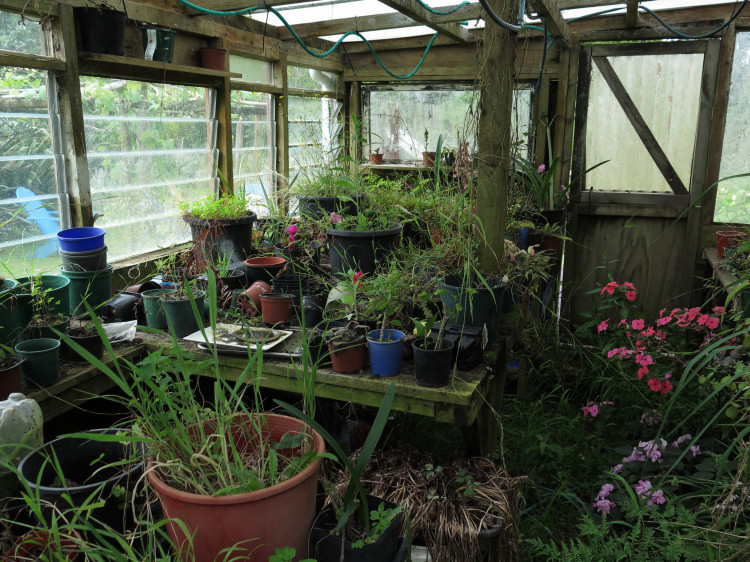 My greenhouse is a shambles.  I rarely find time to get in here and do any work and it really needs it.  Plants die when I'm not looking, although at present I am remembering to come and turn the sprinklers on regularly and since Stephan did some maintenance on them for me, I'm not accidentally leaving part of the area unwatered.

This is Andie, who with her mother, Rebecca, came to visit for milking this afternoon.  Rebecca's sister lives just down the road and she'd asked if her visitors could come up and take part in our evening's work. 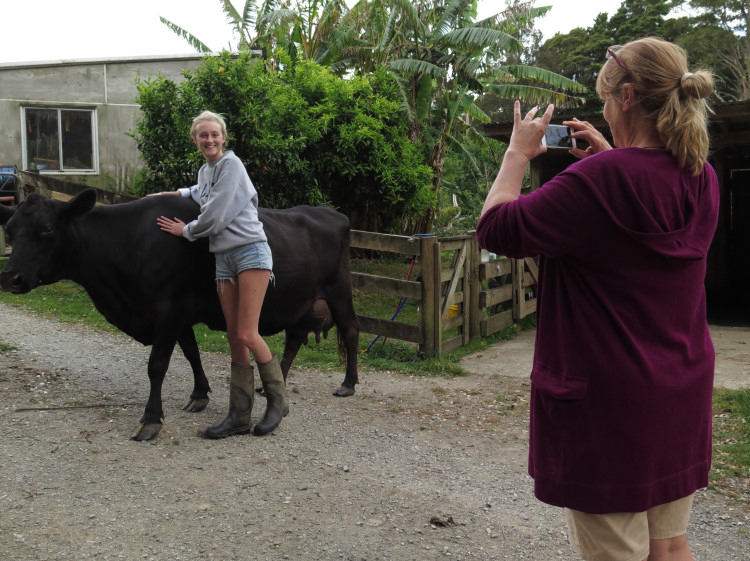 They currently live in urban (I'm fairly sure) North America, so this will have been a rather different experience than usual. 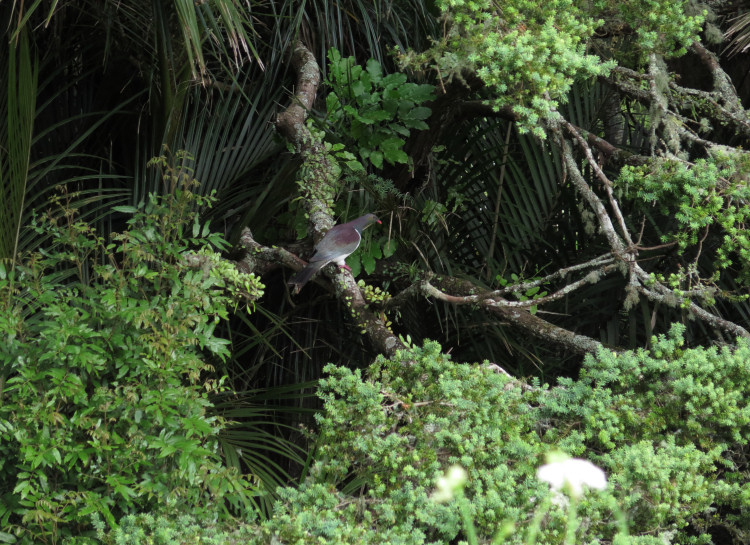 We took a short stroll along the main track to see out across the farm before they left and this Kukupa swooped in over us and alighted on a tree branch over the stream. 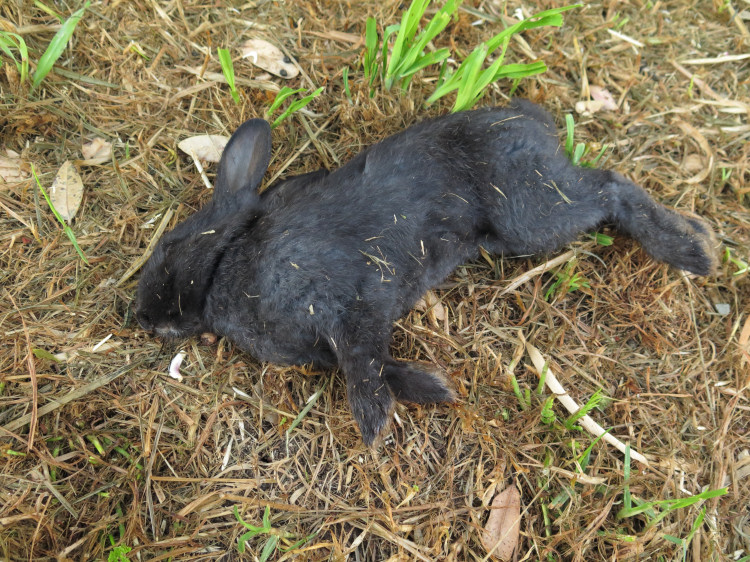 Oh, back to one black rabbit then.

Yesterday afternoon when we came home, I noted that this rabbit was sitting unusually quietly under the lemon tree and this would explain why: it was ill. 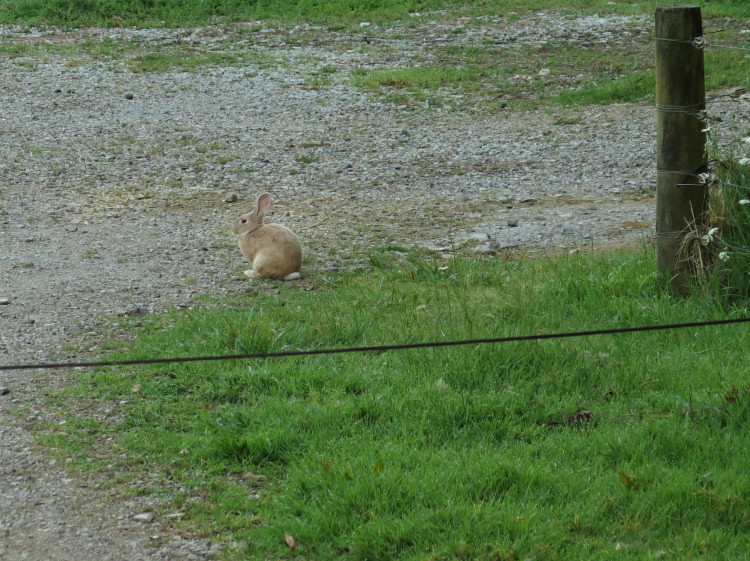 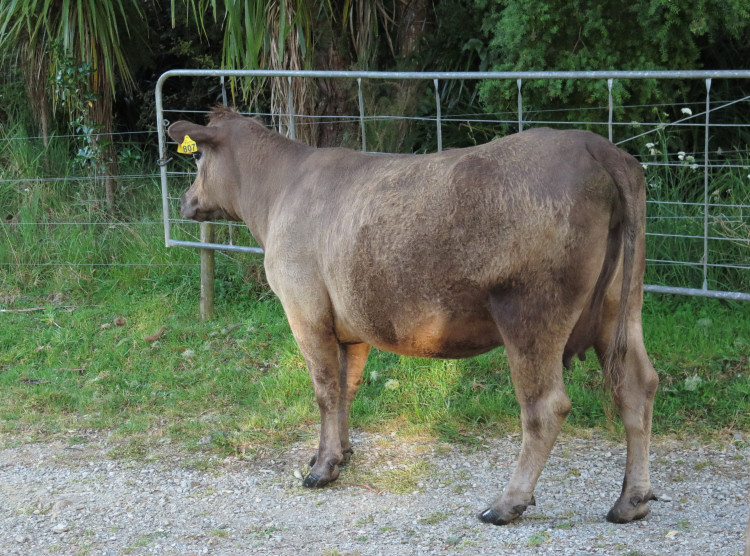 Although at that moment his presence was perturbing for 807, who'd just come down to the milking shed for her morning molasses treat bribe. 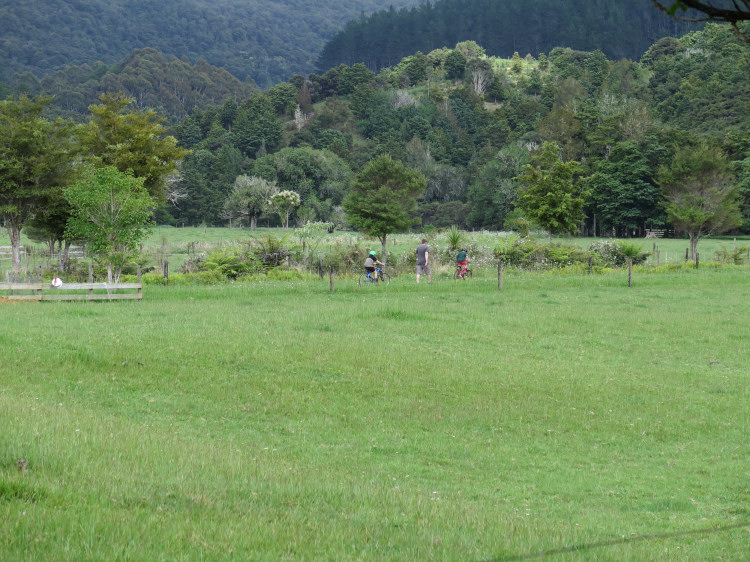 Our power went off at 8am, for the annual maintenance day, not due to come back on until 5pm.  There were a lot of things we could do without power, although I'm always overtaken by a strong urge to vacuum clean whenever I know it's impossible.

Stephan went back to continue spraying gorse in the Small Hill and I spent a long time in the kitchen, catching up with things other people would never let pile up.

Mathew came out mid-morning with two boys and bicycles and they set off out to find Stephan.  I found myself in a solitary mood and opted to continue my work in the house. 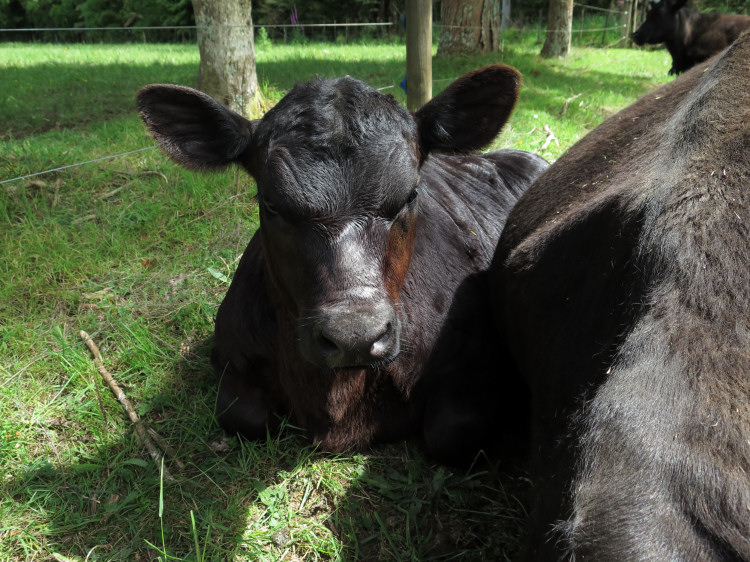 When I felt I'd done enough I rode out to find them but there was only a tractor and a couple of bikes parked in the lane, with no sign of people.

So I went cow visiting instead.  Here's Eva's daughter, sitting beside her mother in the Swamp paddock. 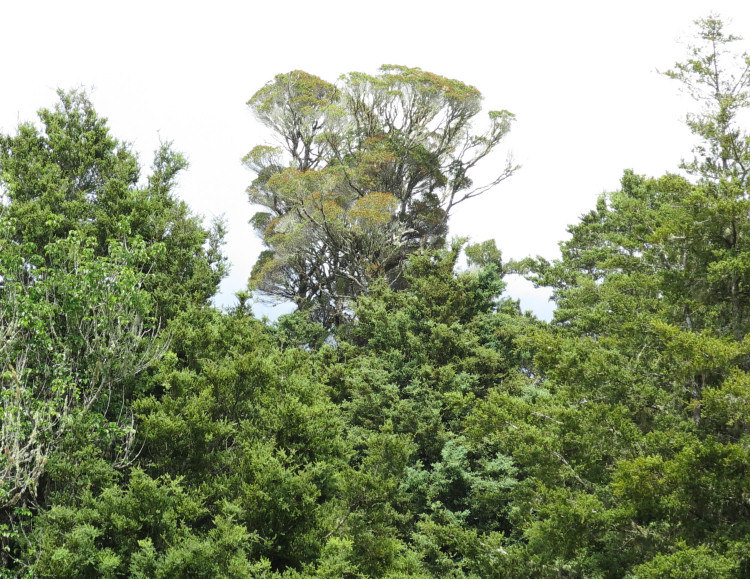 The big Northern Rātā looks like it is very lightly flowering.  It didn't get a lot better than this. 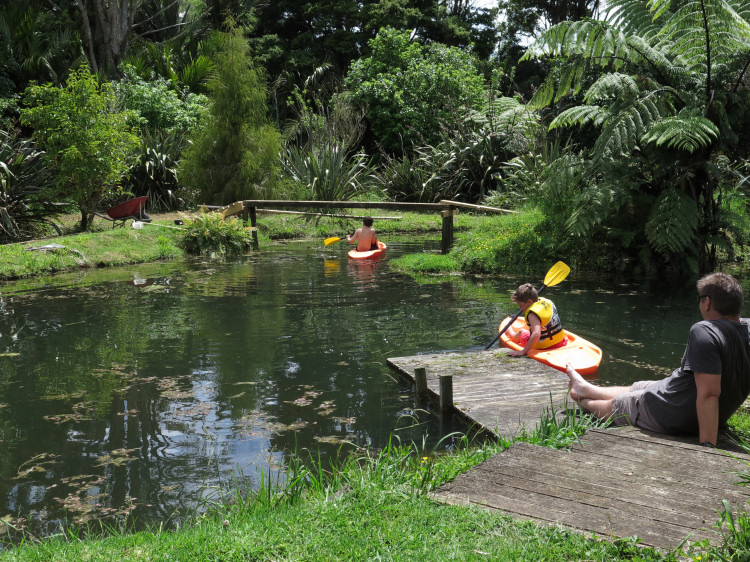 The others arrived back for some pond fun before lunch.

The bridge was built for people to fit beneath it and it should be above flood waters too. 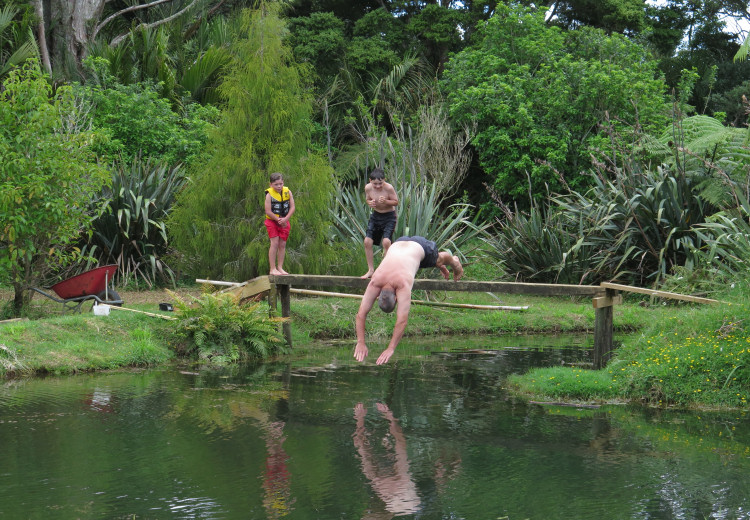 It's also in an excellent position for diving! 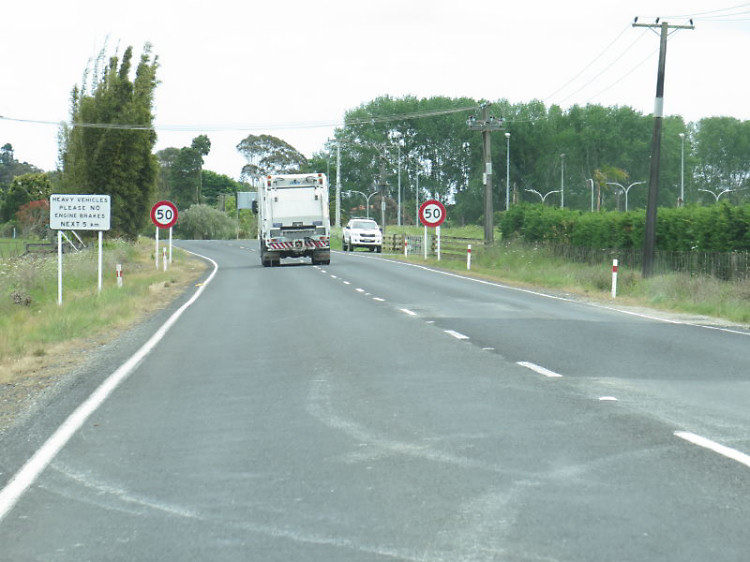 We went to town this afternoon to do a few things.  Just past Pamapuria we caught up with this truck, swerving back from the wrong side of the road as he crossed the bridge, to avoid hitting oncoming traffic.  It was a frightening moment.

We pulled right back from him, convinced we were going to have to watch a collision before the guy got to town.  For long stretches he travelled on the wrong side of the road before sometimes indicating that he was returning to the left.  It was extraordinary and alarming behaviour.

Here as he entered Kaitāia, he was again well out of his own lane.

A little further along he pulled over, and so did we, not daring to confront him directly but to knock on the window of the speed-camera police vehicle parked there.  The camera operator radioed my report through but I have no idea whether or not they caught up with the driver, who by that time had driven off again.  I made a further report via the Police website in which I offered them my photographs but as usual have heard no more.  No wonder people keep crashing and dying on our roads! 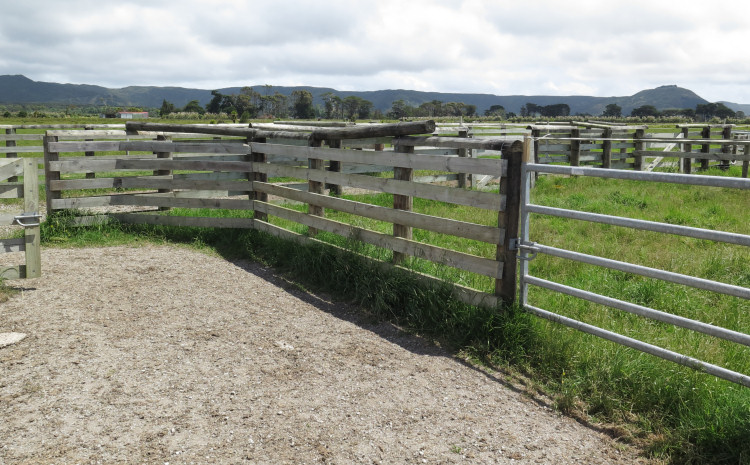 One of the purposes of our outing was to visit Jill and Grant, to have a look at their new yards, do some measuring and walking around a bit.

They have some big steers that jump, apparently.  I hope we won't need to have rails quite so high. 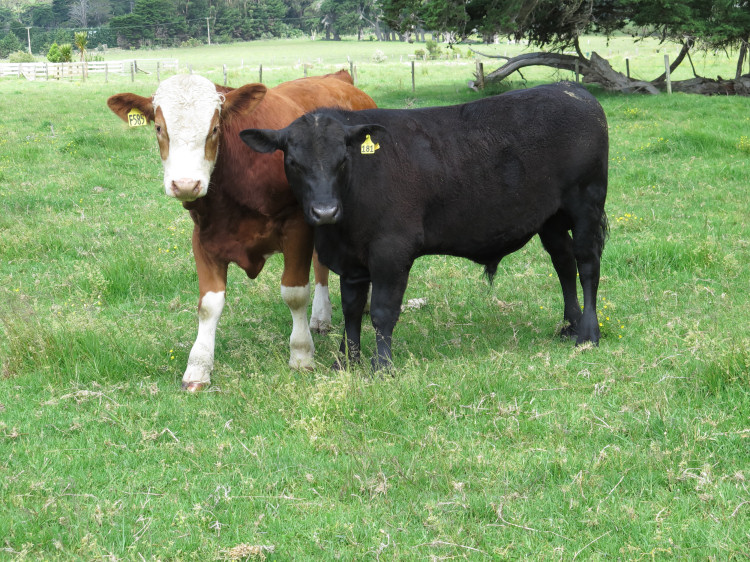 Then Jill took me to see our little bull, 181, son of Henrietta 141.  He now lives with this fine Simmental fellow and will hopefully sire some lovely calves with Jill's heifers. 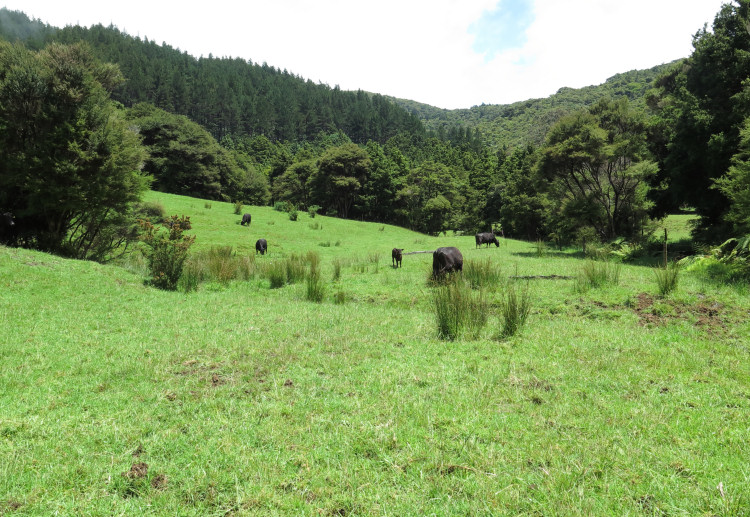 Checking on the cows and calves now in the Spring paddock, I was pleased to find they still had more grass than I expected.

It is easy enough to count and keep track of eleven untagged calves, even if they run around while I'm looking for them. 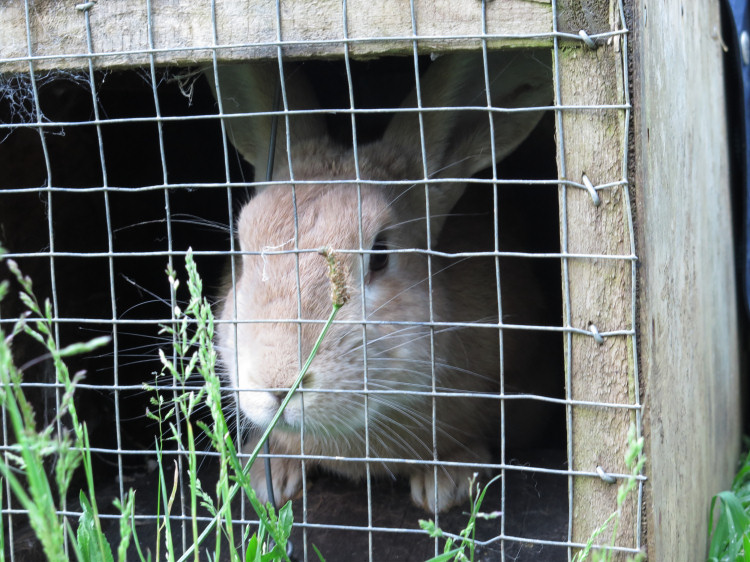 Big soft rabbit in a live capture trap!  I suspect he may have sought shelter during a particularly sudden and heavy downpour today.

We have been trying to catch this beautiful creature for many weeks because Jane keeps threatening to lay poison or have her son-in-law shoot him and there would be bad feeling around here about that.  We derive great pleasure from seeing big soft rabbit around the place (and wickedly hope there might be some big-eared offspring somewhere, although none have appeared yet).

But life for a domestic rabbit in the wild is likely to be shorter and more violently ended one way or another than in the care of someone in particular and, while we think we know where rabbit came from, he only narrowly missed death in escaping from an uncontrolled dog, so probably best he go elsewhere now.  One of neighbour Sandi's acquaintances is looking forward to adopting him and when he's been re-tamed, I intend to visit and stroke those beautiful ears! A small beautiful thing.  Lying on the grass where I set out some electric tape today, this lichen must have blown from one of the nearby Totara trees. 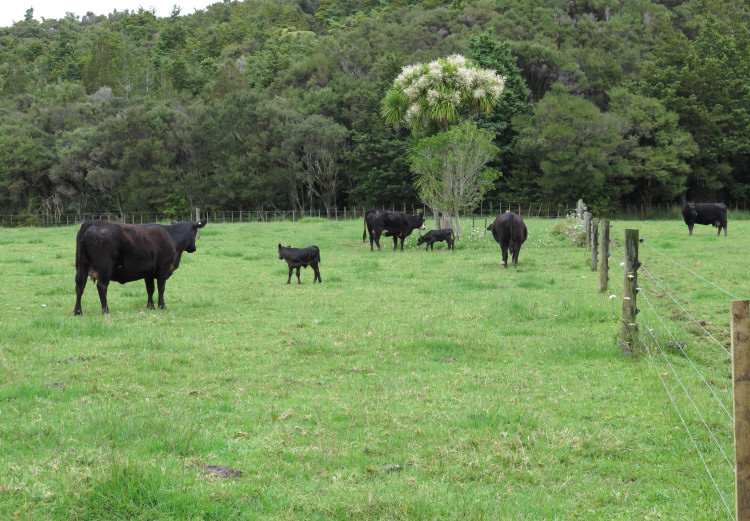 These three, the last to calve, have run out of grass - probably should have moved them yesterday but got busy.  The last calf has stopped hiding away in the long grass in the little tree reserve, so I moved them across the lane to the Windmill paddock and then moved the three from Mushroom 1 (on the right) as well, creating a six-pair mob.

Many of the The Tī Kōuka are now in full bloom. 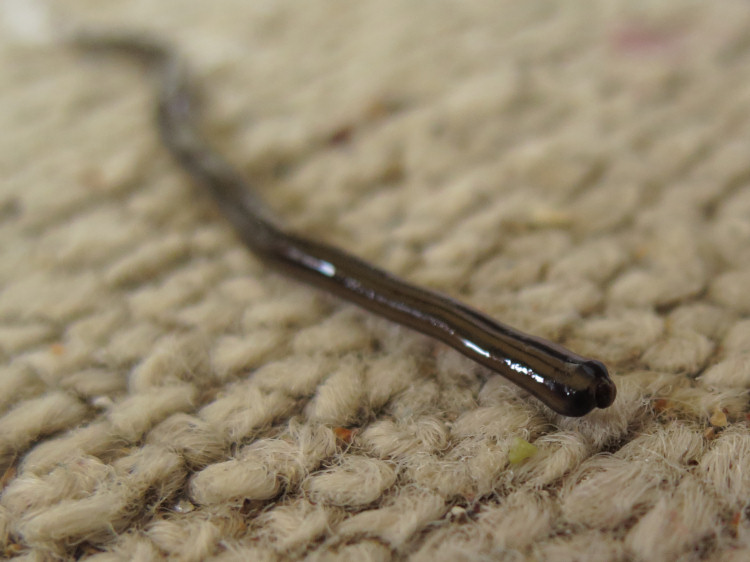 This odd creature, presumed to be a flat worm but I can't find whether it is native or exotic, appeared on a kitchen bench this morning.  It must have crawled onto the bottom of Stephan's mug when he put it down on the deck for a while outside.

We watched it stretch its way off the bench and hang for a while before dropping to the floor.  It moved pretty fast! 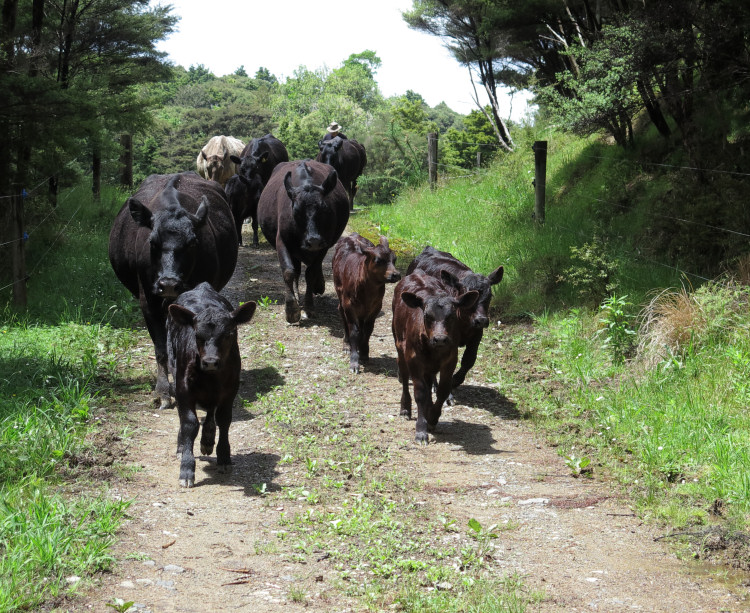 Eva, Emergency, Endberly and friends, moving from the Blackberry to the PW.  The calves get better and better at moving, seeing where to go through gates, learning the layout of paddocks and lanes - although out here things have changed even for the cows, since our drain digging activities earlier in the year. I hadn't seen the four cows and calves in the Big Back North for five days, which is not my usual practice - I'd been out to look and listen each day, sometimes more than once, but had not had time or inclination to climb the hill looking for them.  With nobody calling, it was reasonably safe to assume all were ok.

But one can't go on making assumptions, so Stephan and I walked up to find them this afternoon.  It's a big paddock and they were all very happy still, the calves sitting together and the cows nearby grazing.  (Grey 607 is in the picture.)

The Middle Back through the fence looks delicious but I need to do some calf tagging, so we urged the calves and their mothers down the hill and in to the Bush Flat paddock.  We'll get them in to the yards in the next couple of days. 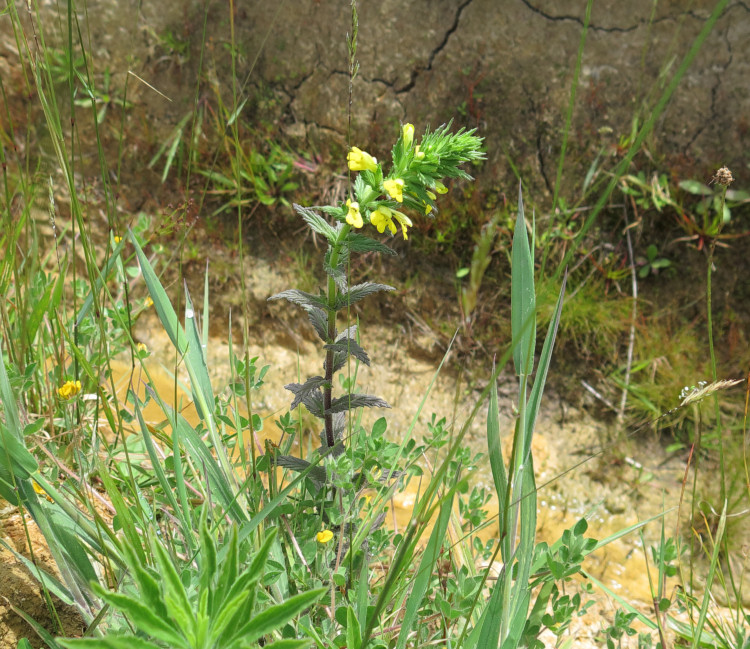 We walked back along the Bush Flat lane looking for Tarweed, since this is one of the areas the seeds were spread with the limerock from the local quarry.

We will get all the plants eventually.  Plants with seeds that are not wind-spread are more controllable than those dispersed on the wind, like Ragwort. 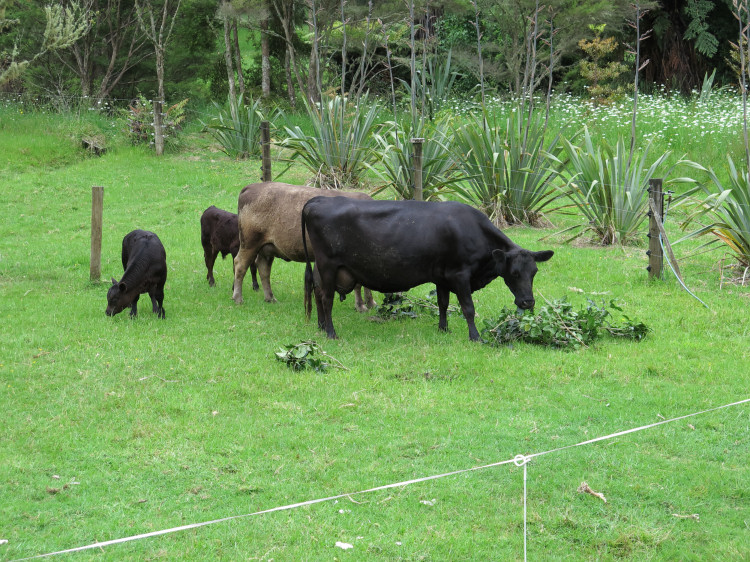 Stephan pruned some of the young Puriri by the pond, to allow a bit more room to walk around the far side and threw it over the fence for Zella and 807.

I watched for a while to see how they negotiated their places at the pile, Zella keeping 807 away for a while but gradually accepting that she had to share the treat.  807 is just the right companion for Zella, with her confident, calm attitude.